Yes, it’s already time for the latest update in my series of articles providing a completely subjective, unscientific, and unofficial history of watch photographs online.

It was 2015 when I first wrote about the history of wristshots. More than five years passed before I penned a second installment that included both wristshots and other forms of watch photography. It’s only been six months since then, but the world of online watch imagery has been changing rapidly since late last year, both for better and worse in my view.

As the mass appeal of watches has exploded and enthusiasm for timepieces is now a fully mainstream phenomenon, it shouldn’t be too surprising that the portrayals of watches and their owners on social media have moved quickly to look like what we see for other types of products, experiences, and lifestyles. 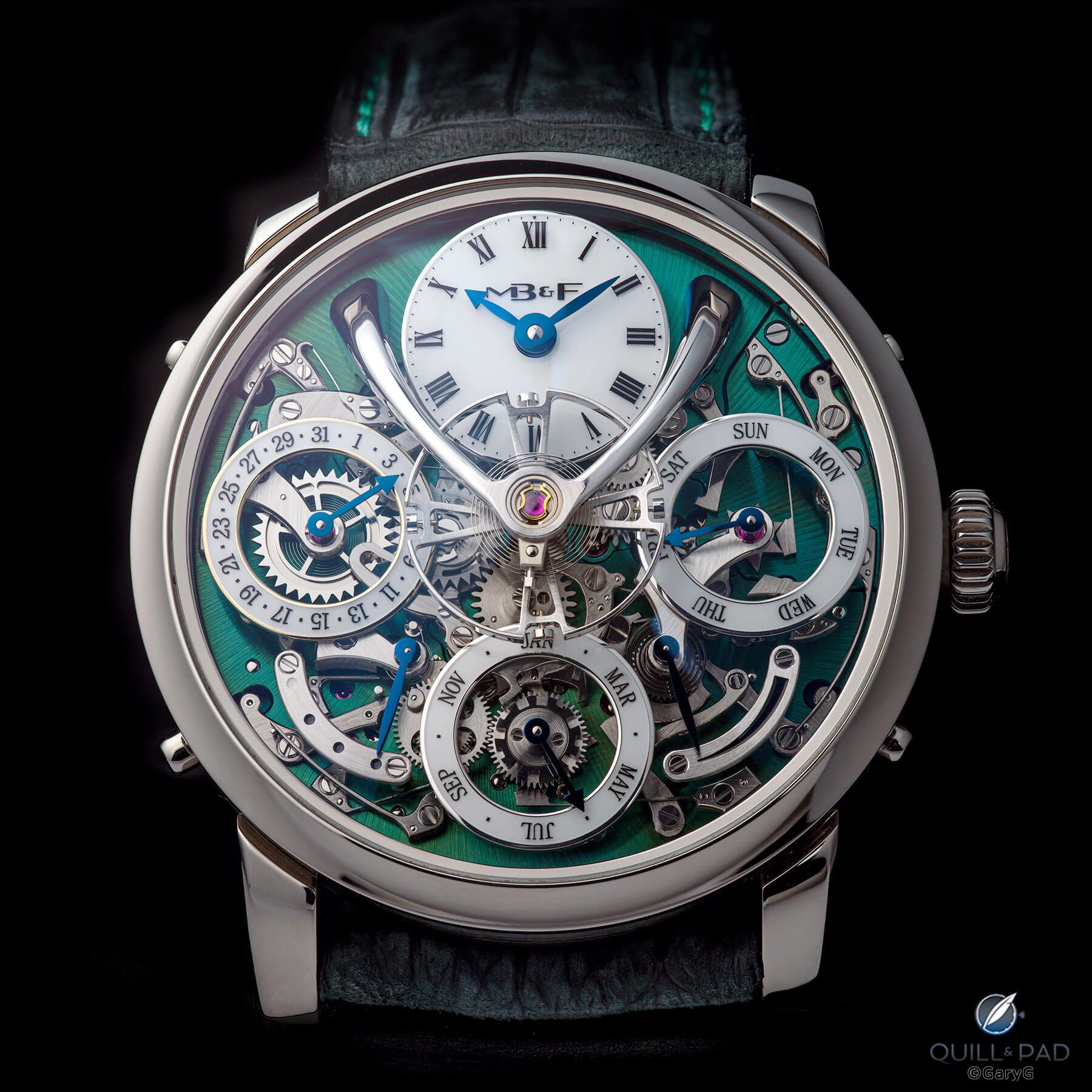 The first big trend I’m seeing is the emergence of storytelling as a dominant theme in how watches are shown. While my photography mentor Ming Thein’s “four things” – light, subject, composition, and story – are still the foundations of a great image, my sense is that the emphasis in “watch photography” on the watch itself as a subject has diminished in favor of drawing the viewer into a context or story in which the watch is only one element.

Of course, shooting watches with props is nothing new. While my own shooting style favors making the watch the star, generally in isolation, folks have been doing things like shooting a dive watch on a coiled rope next to a scuba regulator for as long as I can remember.

Of late, however, many more of the posts I see use a watch – and it often seems unimportant which watch – as a prop within a lifestyle tableau. 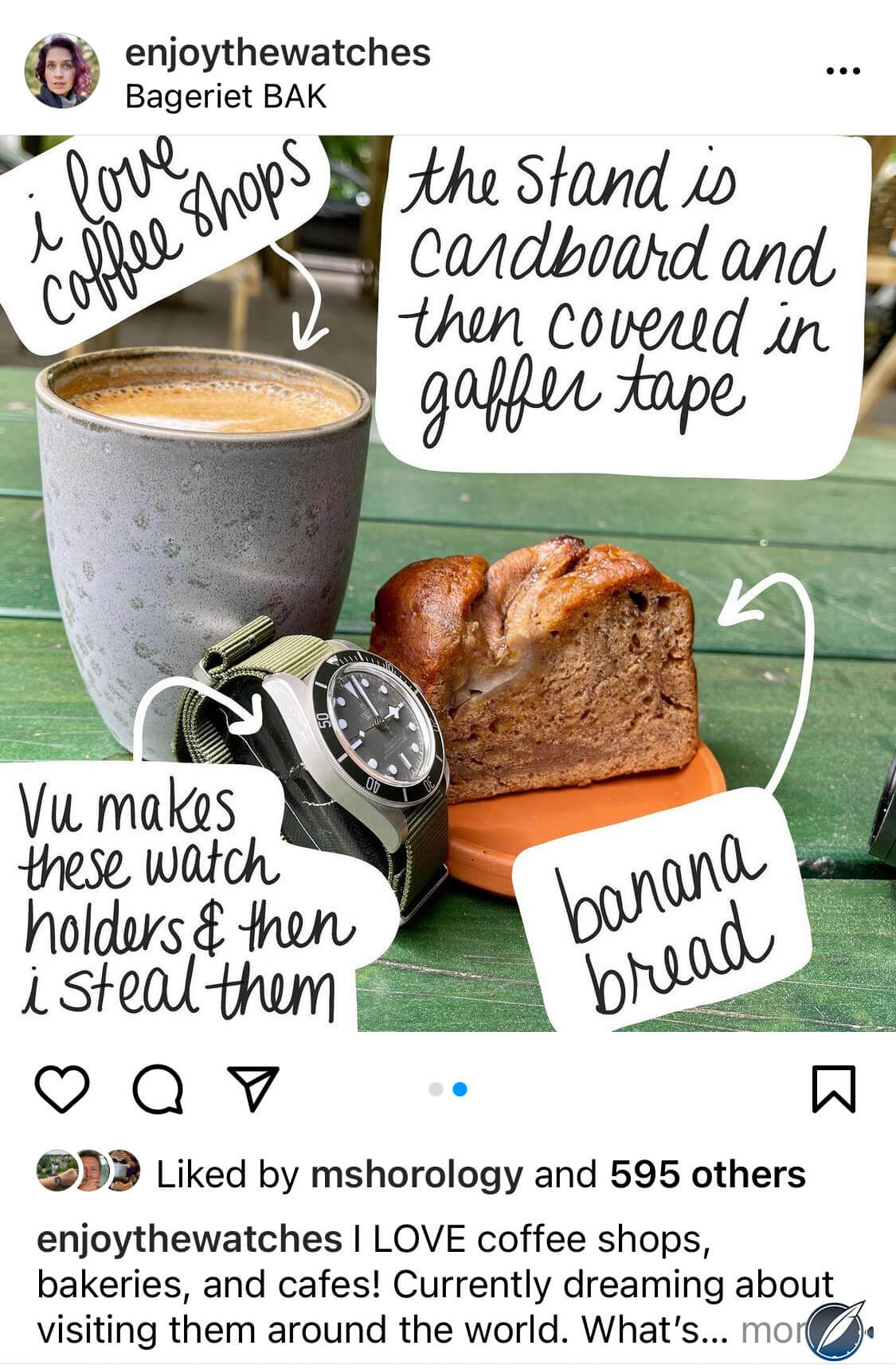 Drawing us into daily life: story-oriented watch photography by @enjoythewatches

But just as a quick online search for “storytelling as an online trend” will give you a sense for the current level of importance of the storytelling art to consumer brand managers, so it seems that for individuals who are building their own personal brands on Instagram, YouTube and elsewhere, it’s increasingly about the stories they spin rather than the objects they show.

In my time in Silicon Valley, one of the things I’ve learned about the success model used here is that it is based less on proprietary ownership of ideas than on the open sharing of concepts based on the principle that rapid improvement of a promising idea, not careful hoarding of a static trade secret, is the surest path to success. 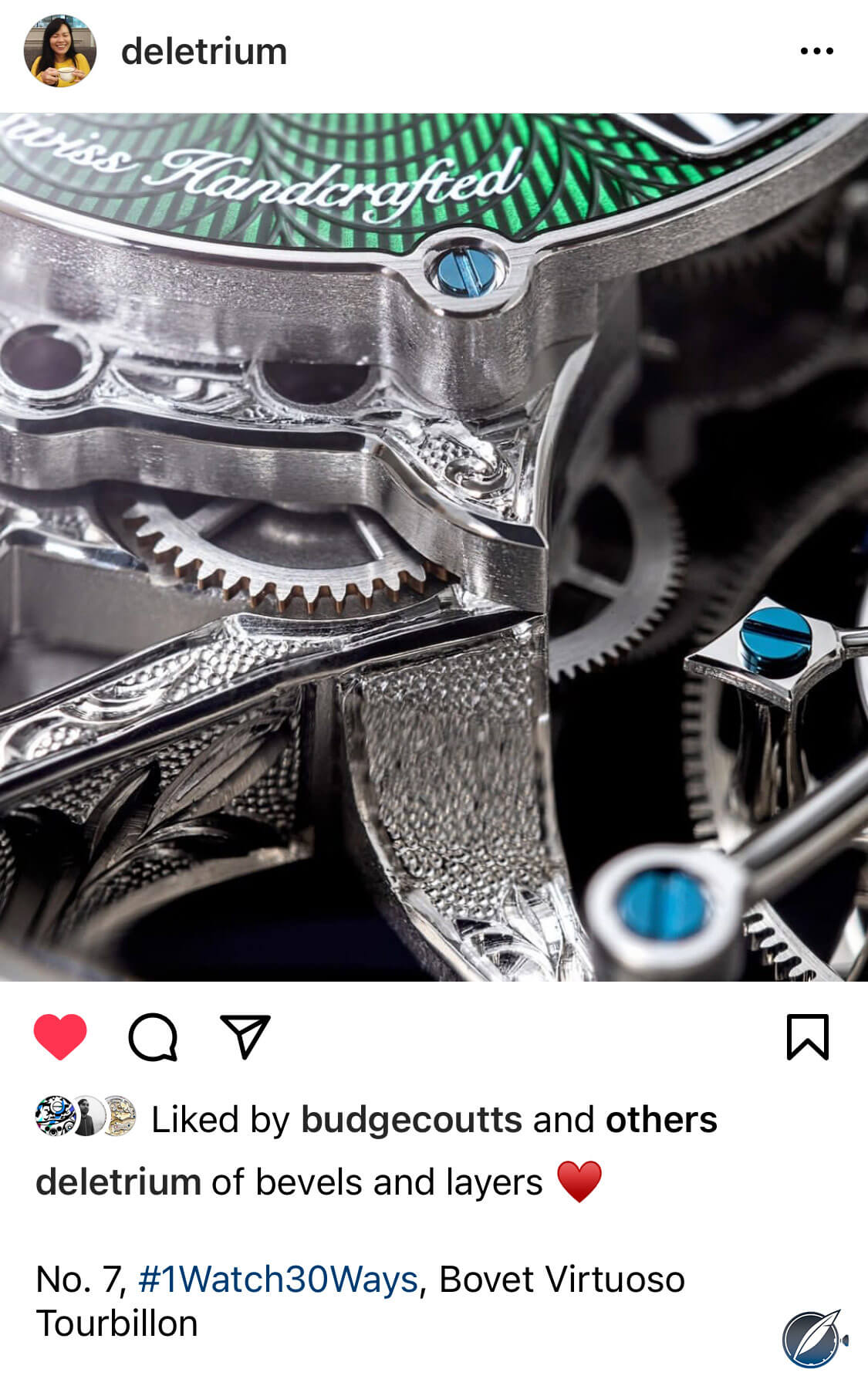 Number 7 of 30: @deletrium shows us one of multiple perspectives on a Bovet Virtuoso Tourbillon

As the population of young watch enthusiasts – including many from the tech world – grows rapidly, this idea of openness has now found its way into how we see watches shown online.

In my most recent article in this series, I highlighted Wanyu Lee (@deletrium), who was among the first I noticed offering behind-the-scenes tutorials of her shooting setups as part of her Instagram posts. She has now extended that idea into a series she calls “One Watch 30 Ways,” which is exactly what it claims to be: 30 different views of a single watch (currently a Bovet timepiece) published over one-month period with liberal sharing of the secret sauce behind each shot. 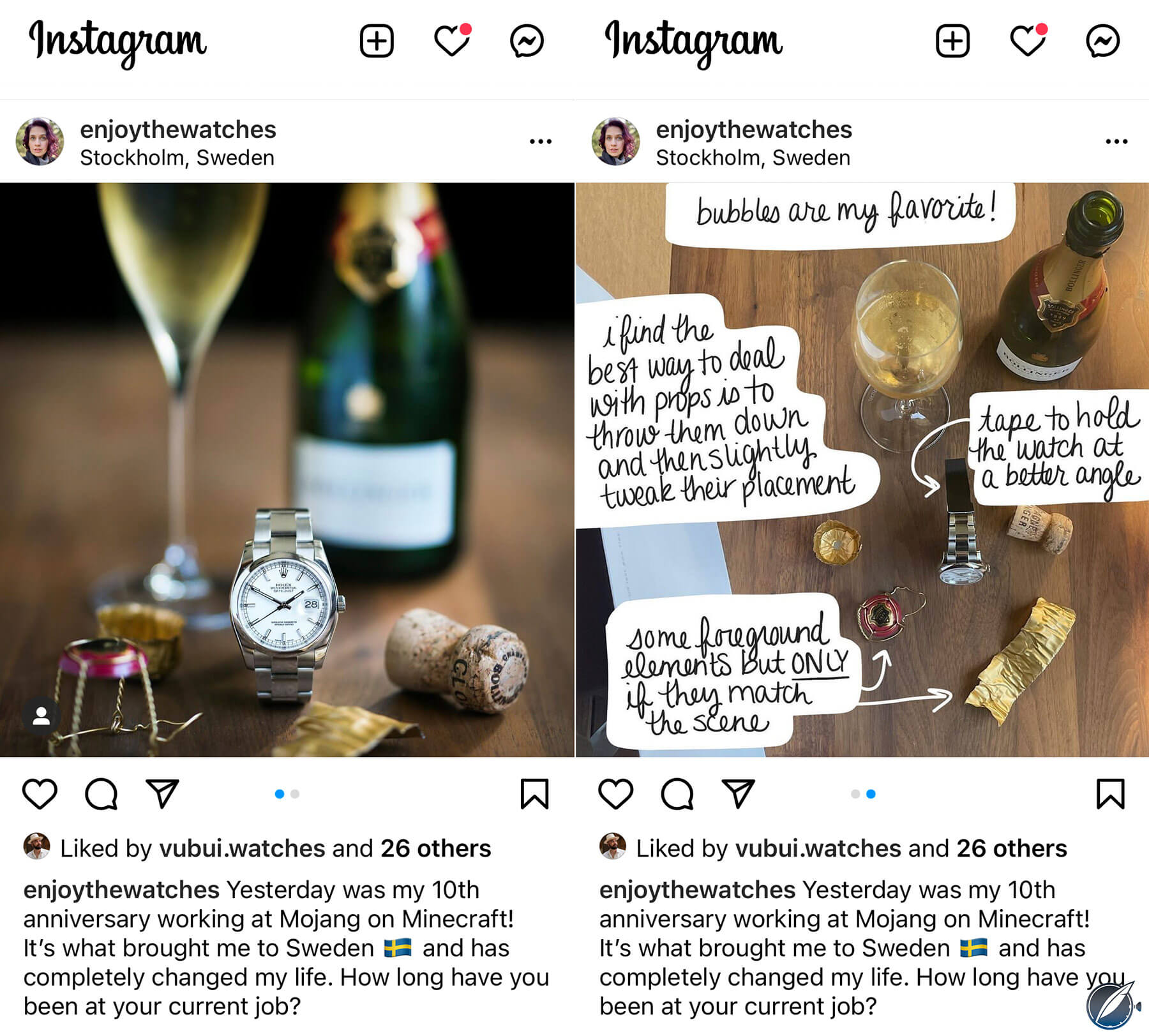 The story shot, and the story behind the shot, by @enjoythewatches

And she’s not alone. Lydia Winters (@enjoythewatches), whose actual job title at Minecraft is chief storyteller, now has a how-to shot accompanying each of her Instagram posts. And designer and photographer Verne Ho (@watchstudies) posts a tutorial each Sunday on a different aspect of watch photography, complementing his ongoing stream of high-quality studio photos of watches. 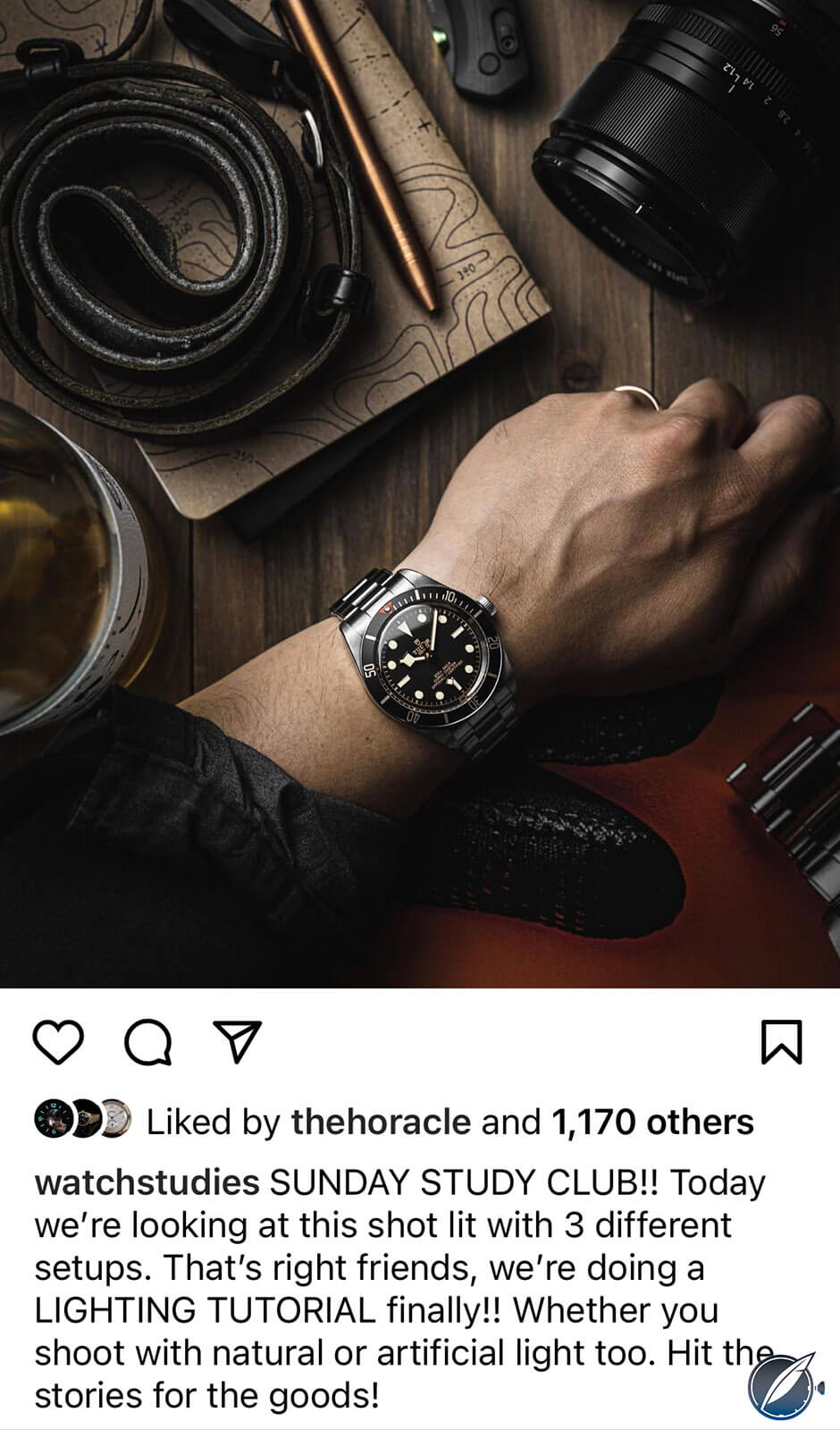 For tutorial, see link in (his) bio: @watchstudies shares the magic every Sunday

If I have a beef with some of the members of this new wave of shooters, it is an apparent tendency to believe that the history of watch photography began pretty much when they picked up a camera and started to click away. There’s no shortage of posts, for instance, full of self-congratulation at discovering things like depth of field and simple use of light.

As long as the more skilled practitioners are letting me in on their tricks, though, I’ll tolerate the occasional precious prose from the others and focus on accelerating my own improvement. 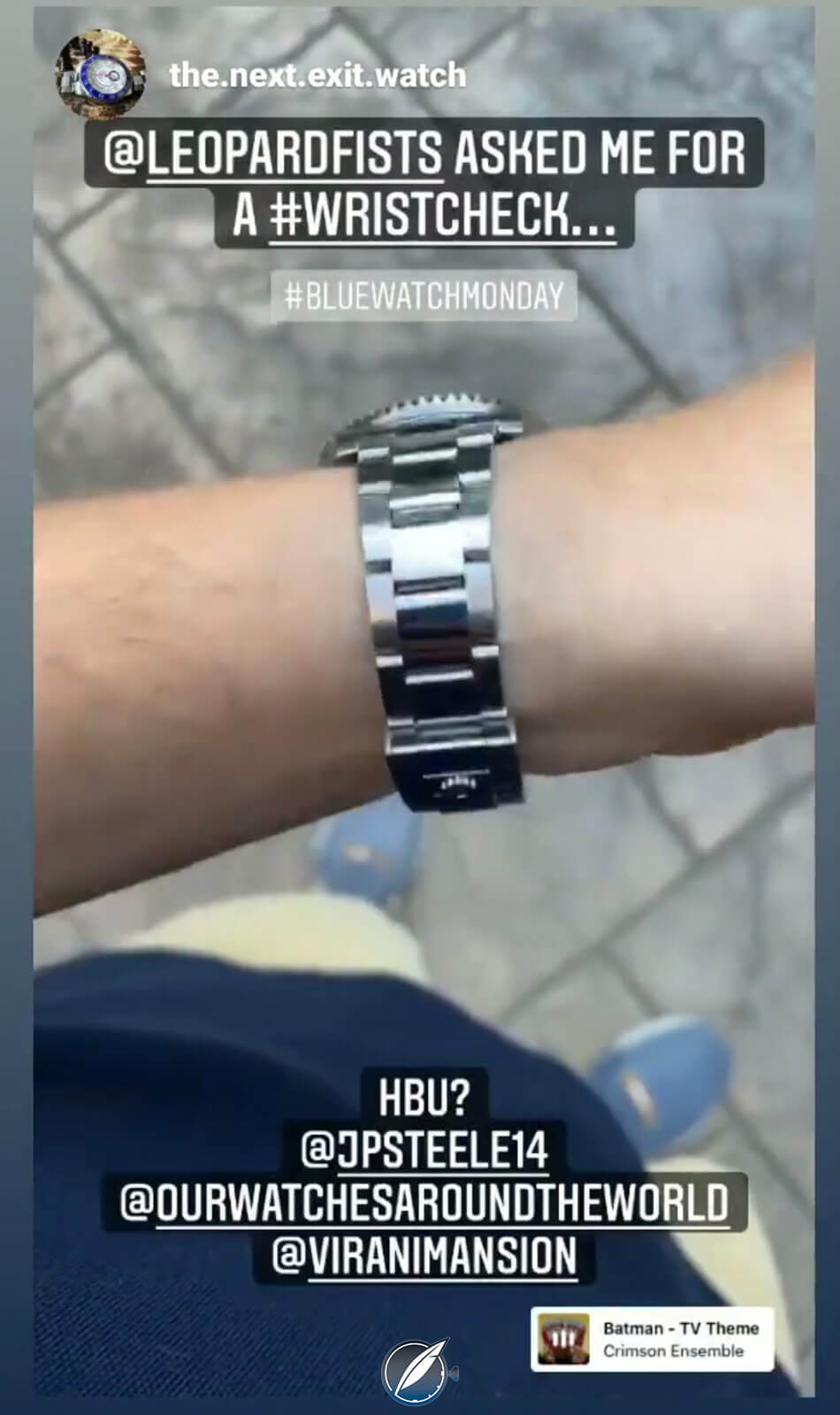 Another form of collaboration that has mushroomed over the past months involves using Instagram Stories and cross-tagging to build online renown and stature. As a moderate Instagram addict, I’ll generally scroll down my feed of fresh posts a couple of times a day and then check out the first several Stories in the queue before moving on to other things.

Lately, what I’m seeing is a flood of cross-tagged Stories that in “olden” times we would have called a wrist check: “@thewatchywatch asked what I was wearing today . . . ” accompanied by a wristshot of said watch and three to five tags of others asking them to continue the chain.

I suppose it’s good for visibility and may contribute to one’s standing on the IG algorithm, but for me it’s already gotten old. Same goes for long strings of Stories where every nugget of praise for a given post is reposted by the original photographer, then back by the praise giver, and so on – although in the spirit of full disclosure I will confess that I occasionally do this myself. Although I’m too lazy to make it the life’s work it seems to be for some. 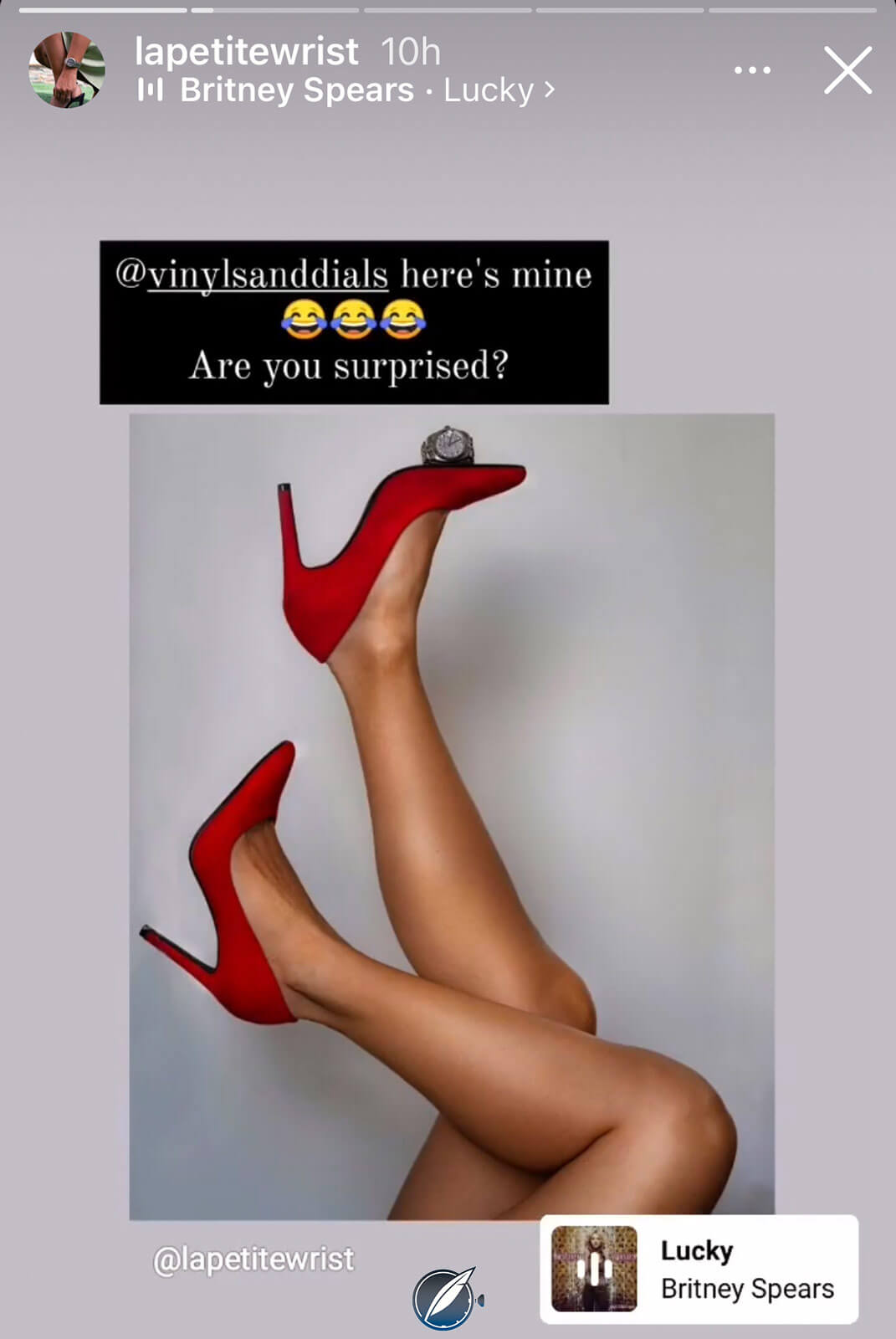 Collaboration, type 2: oddball challenge themes and you at @lapetitewrist

Another collaboration-related trend is the expansion, seemingly in violation of the laws of online physics, in the number and variety of “days” and “challenges” for posting.

I mean, Speedy Tuesday was fine, and Blue Watch Monday, Macro Monday, Caseback Fridays, Tourbillon Tuesday, and so on have been bearable. But now it’s just getting silly.

And while there have been suggested themes such as “nature” or “water” for photo postings going back to Fridays on the PuristS in the early 2000s and more recently associated with various competitions, over the past months a seemingly random flood of challenges with themes such as “flexed biceps while wearing a red shirt” and “leg day” has been filling the airwaves. 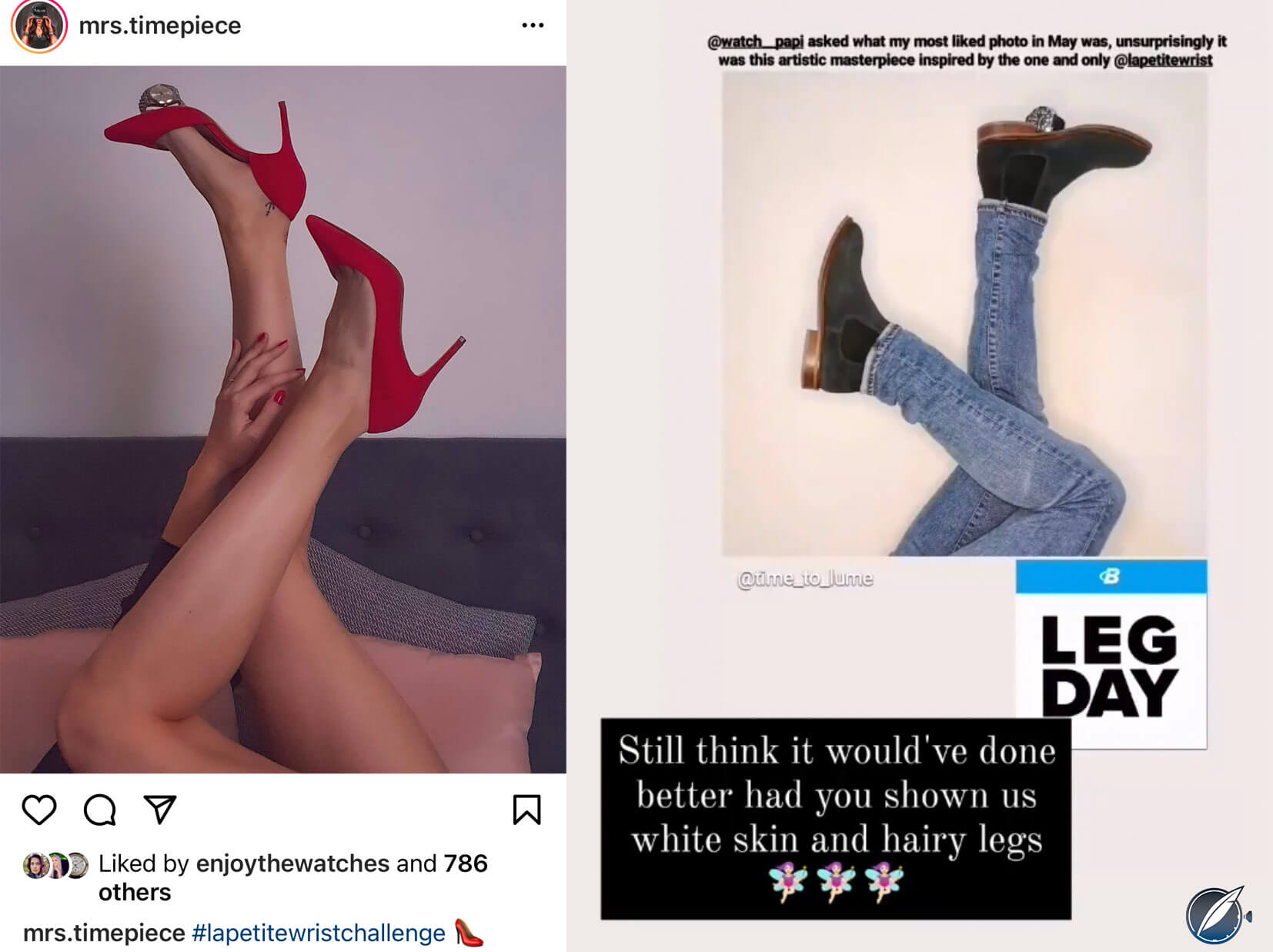 Collaboration, type 2, takes 2 and 3: leg day takes on its own life at @mrs.timepiece

Cross-promotion of content (say, from an Instagram page to a YouTube video or podcast) has been around for a while, with the mentions that publications including Quill & Pad post on IG to alert potential readers to new articles on our site, for instance.

Recently, I’ve seen a proliferation of this practice among individuals as well; Brittany Pearce (aka @watch.gringa) uses her “low-quality watch shots” (her term) to drive traffic to her quirky, “sub par” YouTube videos, and as she persists with the practice I assume that it’s working for her. Along the way, she’s also picked up more than 12,000 Instagram followers in just 10 months. 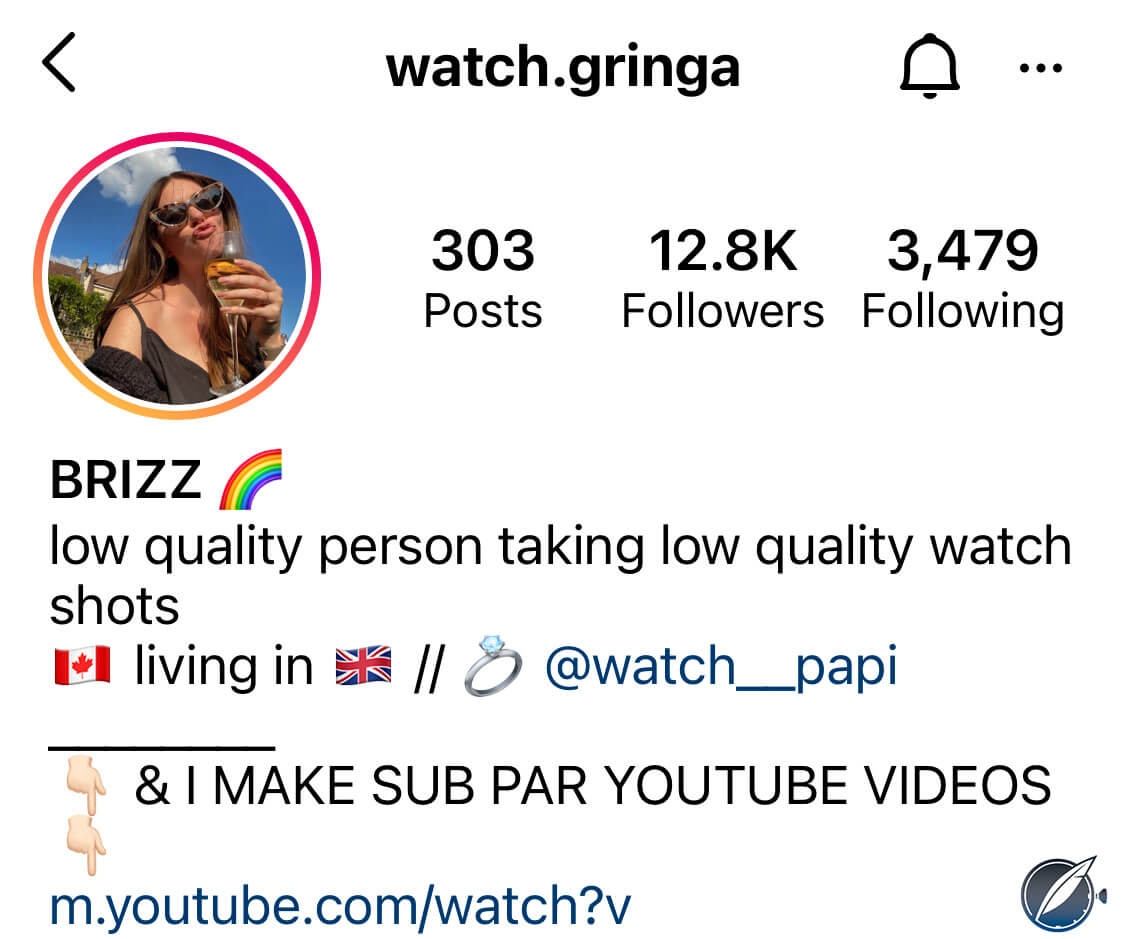 What you see is what you get: no inflated claims here for @watch.gringa

One thing that I’m not seeing (yet), thankfully, is widespread use of the Reels feature within Instagram to share watch-related content. The small amount of these video snippets devoted to timepieces that I see seems mostly devoted to the dreaded wrist roll, so as far as I’m concerned things on this front can stay just the way they are.

More good news, in my view: of late I’m seeing less flexing, the practice of posting a shot of six expensive watches strung down an arm or casually showing an open watch box containing three rows of Richard Milles, with the question “which one today?”

There are still some folks who don’t seem to have gotten the memo on this one, but at least proportionally, as the center of gravity of watch photography overall has shifted away from the watches themselves, the flex fills less of my daily feed.

What fills more? Legs and breasts. Back in 2015 I noted on these pages that I’m a big fan of both watches and sex, though not so much the mixture of the two, and my stance on that topic still holds.

One thing that has been really cool over the past months has been the rise to prominence of many more women among the population of online watch shooters and commentators.

Less salutary in my opinion has been the emergence of a large number of accounts that are ostensibly about watches but consist largely of boob shots with a watch – often out of focus – somewhere in the frame and accompanying prose such as (and I am not making this up), “I know . . . I know . . . you all waiting [sic] for the boobies & watch shots from Ibiza.” Or my favorite so far, “I HAAAATE it when people say ‘your page only grew because you show your tits.’ This simply isn’t true and it’s sooo ignorant. Especially because I’ve been working my legs JUST as much!” 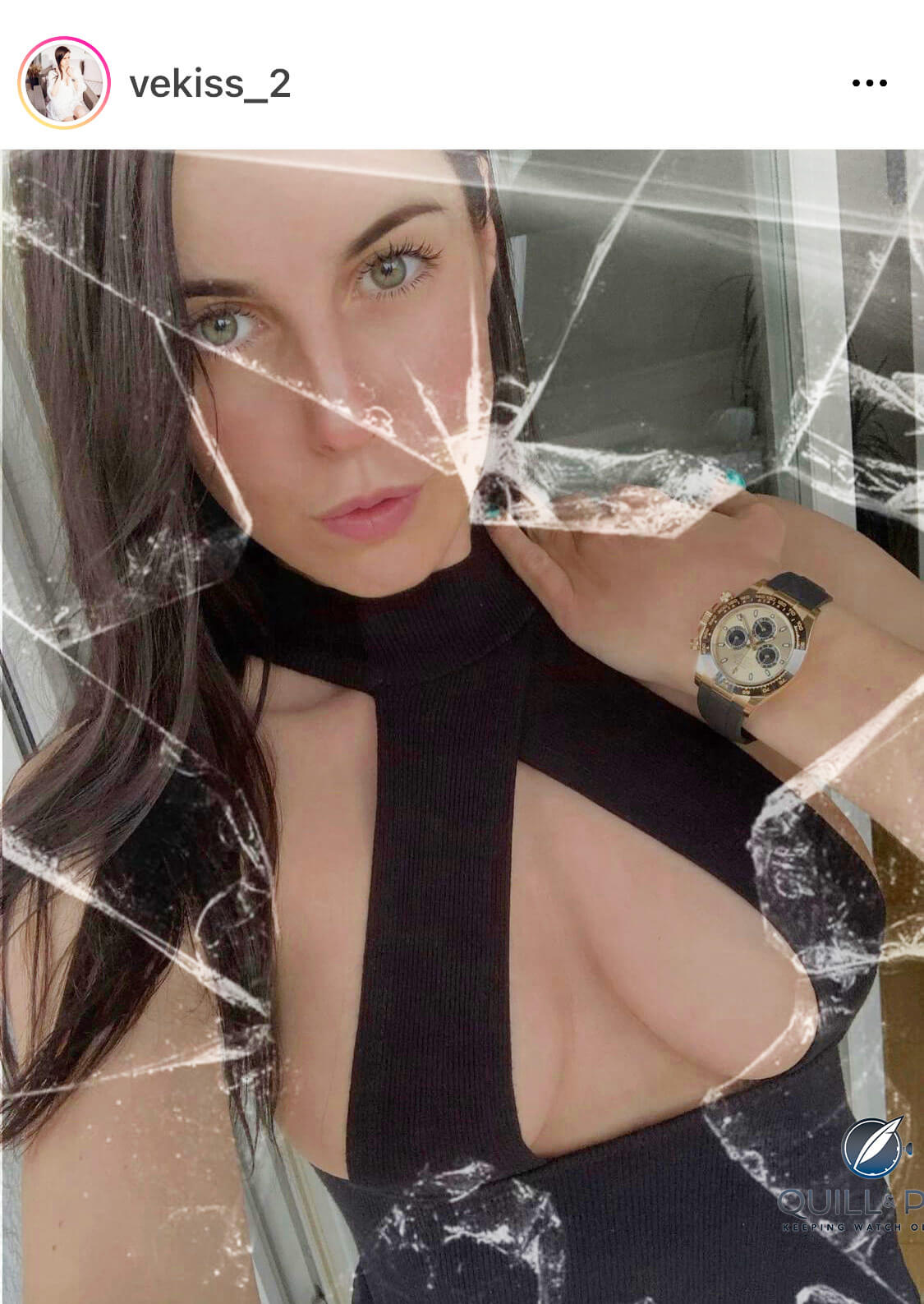 To reiterate: as watch enthusiasm has become mainstream, so has the portrayal of watches in social media. You really know that a category of content has achieved some traction when someone launches an aggregator account that doesn’t contain any original images but simply reposts the work of others.

And there’s now an aggregator for the posts of “the watch girls of Instagram” called @watchvixens. The account’s motto: “Empowering women in horology.” I’m not exactly sure how re-using images of women flashing their flesh empowers them; I suppose I’ll just have to take their word for it. 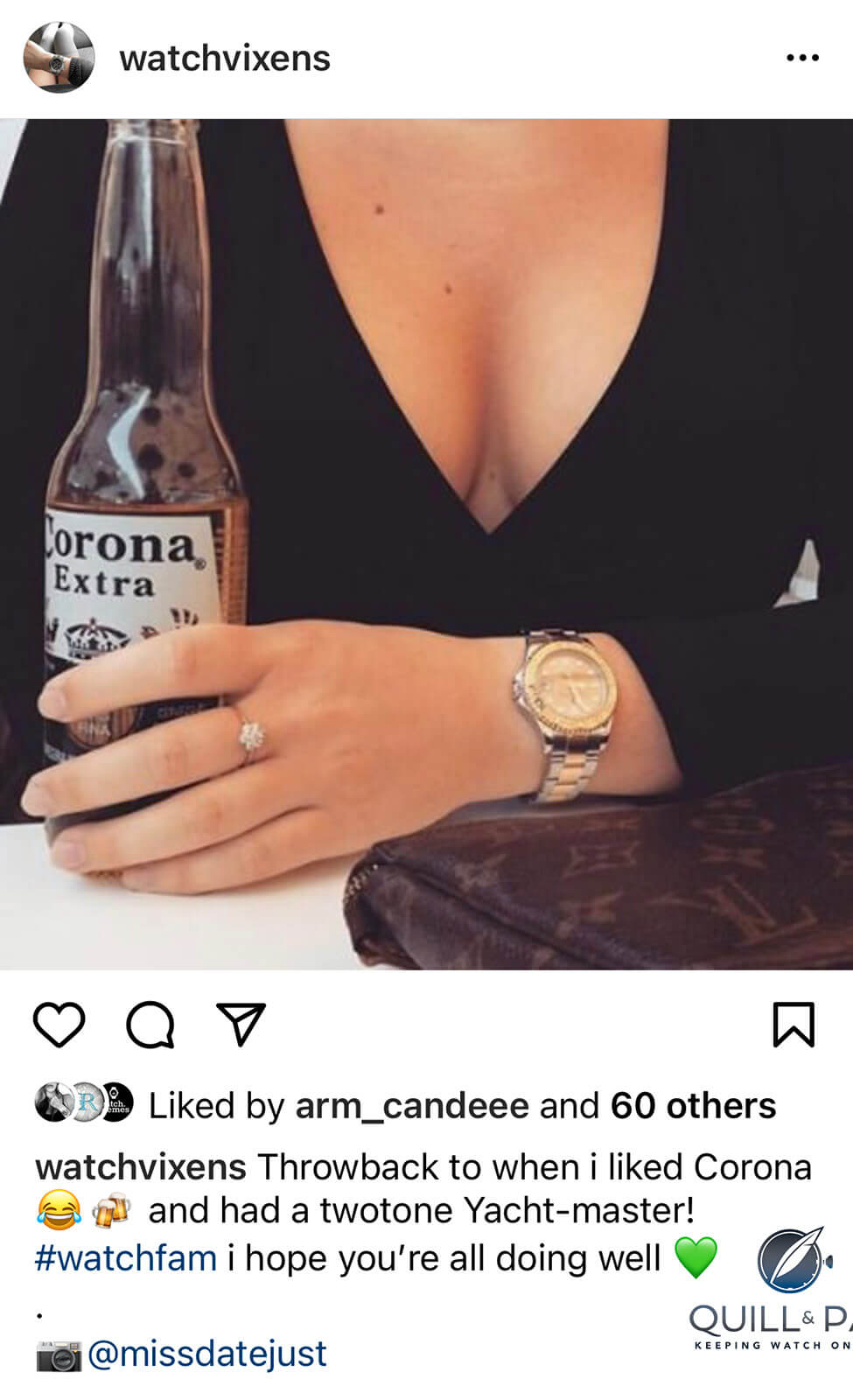 I’ll offer these final tidbits to illustrate just how watch photography now mirrors other classes of online images and accounts when it comes to titillation: 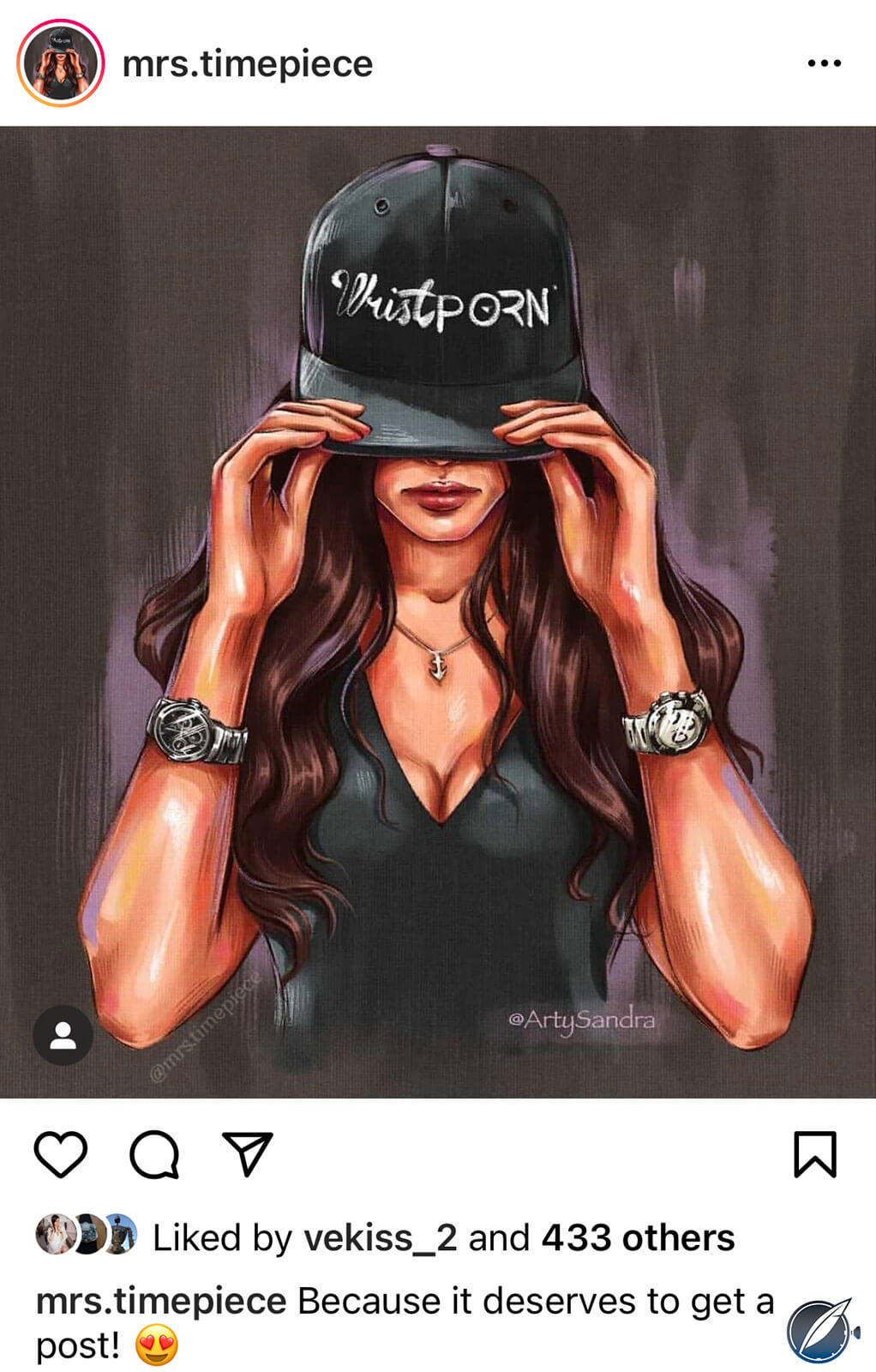 Double wristporn fan art, in case you like that sort of thing

When a hobby goes from fringe enthusiasts’ haven to broad exposure, things change in a hurry! I’ve talked mostly about what’s changed in a short period of time, but I’m also happy to report that there are still lots of high-quality watch pages out there with splendid photography of all kinds, from story-based posts to complex studio creations to my favorite, in-depth images and macros of important and interesting timepieces seen in splendid isolation.

It’s a change-or-die world, so for my own part I’ll continue to dabble with some experiments in online outreach and perhaps a bit more storytelling in my images. But I’ll please myself (and hopefully others as well) the most by continuing to practice my studio technique, constantly expanding the range of angles, lighting setups, and colors and tones I bring to communicating visually exactly how wonderful these tiny machines and their creators really are. 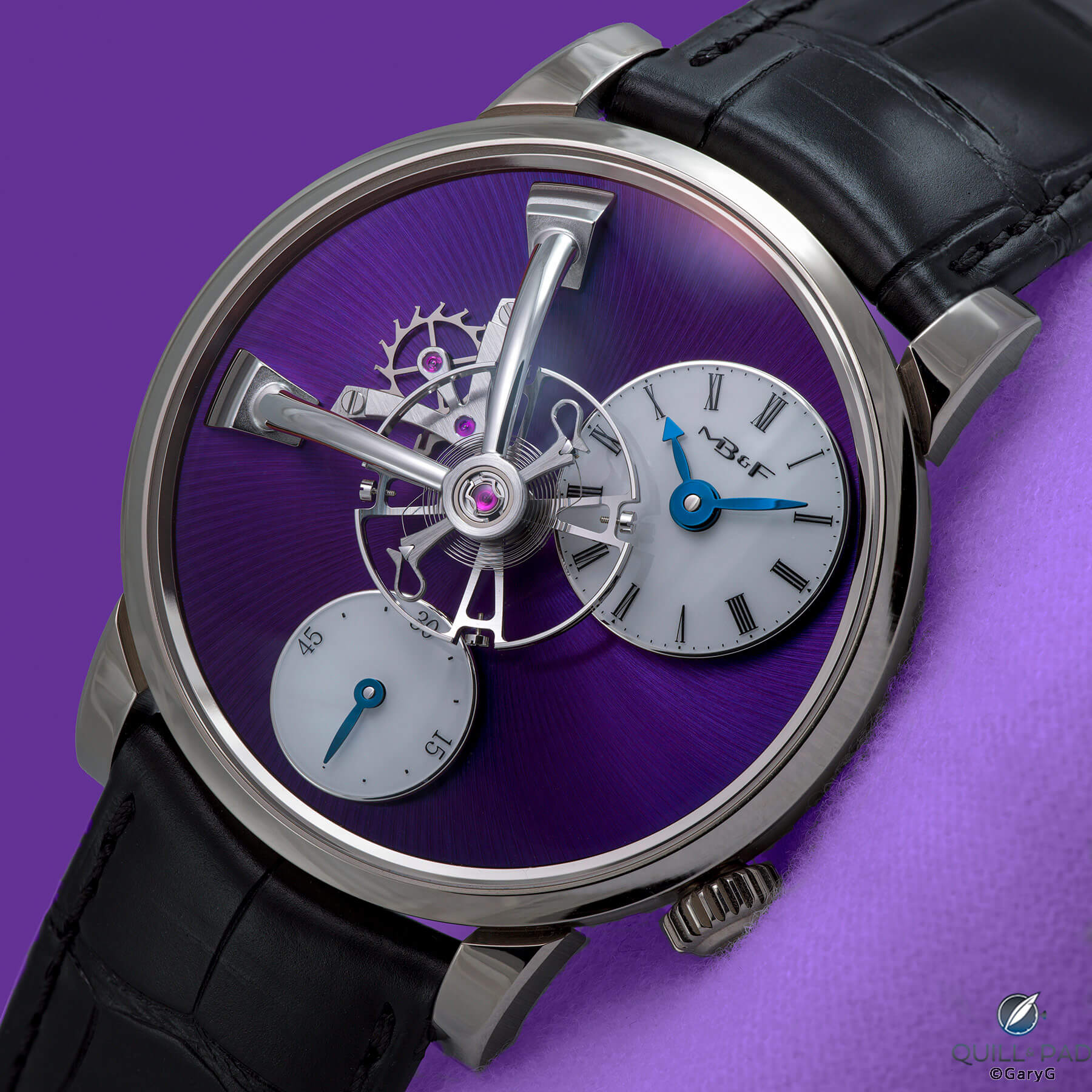 I’ll look forward to your comments. In the meantime, happy viewing and don’t waste too much time searching for watches on OnlyFans!

This article was first published on July 3, 2021 at Evolution Of Social Media Watch Photographs Part 3: Storytelling, Collaboration, And A Bunch Of Boobs.

Wristshots: The Story So Far

Wristshots And Online Watch Photography: The Saga Continues, And, Yes, There’s Instagram Too

Sex Sells – But What, For Whom, And To Whom?