Graf Von Faber-Castell Pen Of The Year 2022 . . . Plus Five More From Previous Years

Faber-Castell introduced its first Pen of the Year in 2003 and has annually introduced a limited edition pen with a very specific theme since. Each tells the tale of a person, a place, or an era that helped “shape the development of humanity,” according to the company. The Pen of the Year 2022 is inspired by the influential Aztec civilization.

I’m always amazed at the creativity – not to mention the historical research – that goes into conceiving and producing each edition. The end result never fails to strike an elegant chord that is neither too much for the smallish canvas of a pen nor too little. Here’s a quick retrospective so you can see for yourself.

The Aztec empire was based on an alliance of three city-states created in 1428 in what is now Mexico. Impressive works of art, a modern political system, and a captivating creation myth are just some of the things for which the Aztecs are known, and this year’s pen touches the high points in a sleek and cohesive way. 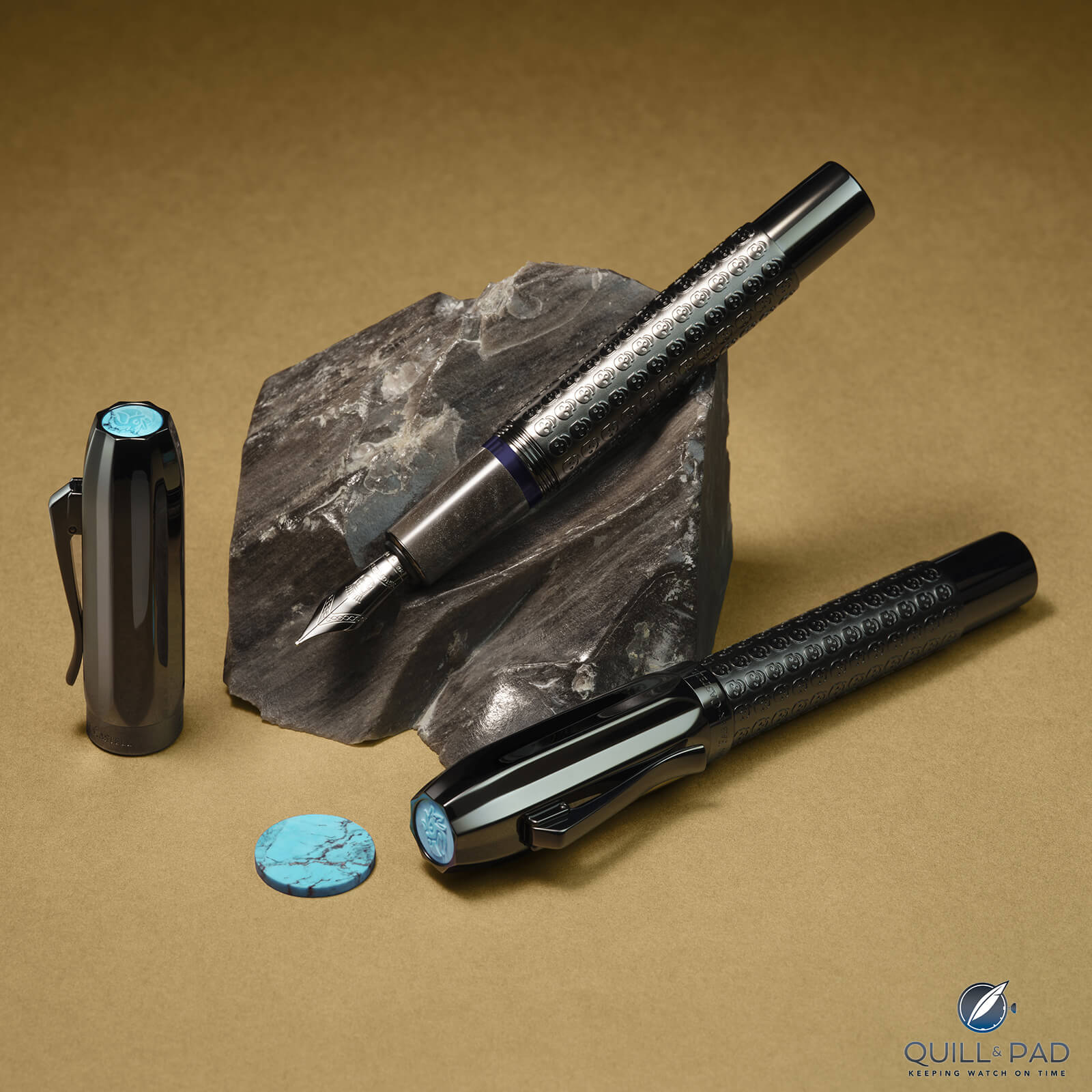 The metal barrel has an anthracite gray DLC coating with a skull pattern reminiscent of Mexico City’s Templo Mayor wall of skulls. There, the Aztecs offered human sacrifices to their gods to ensure the sun would rise yet another day.

The writing instrument’s gripping section is made of obsidian, a volcanic rock used to make arrowheads and swords. In addition to its utility, obsidian also had spiritual meaning for the Aztecs and was used as protection against evil spirits. Turquoise adorns the end caps.

The grooved cap is loosely based on the shape of a cactus, which refers to an ancient prophecy: the Aztec people would know where to build their city once they saw an eagle on a cactus eating a snake. They settled around 1320 in what is now Mexico City.

The plunger-filled fountain pen’s 18-karat gold magnum nib is coated with ruthenium for a complementary pairing with the pen’s gray body. It comes in fine, medium, broad, and double broad sizes.

There are just 375 numbered fountain pens available and 125 numbered rollerball pens, each presented in an elegant polished wood case that includes a certificate of authenticity signed by Count (Graf) Charles von Faber-Castell, part of the ninth generation at the helm of this family business.

This pen tells the story of heroism during the Middle Ages, recalling daring feats, big adventures, and epic battles. The cap of the pen looks like chainmail with a matte, anthracite-gray, mesh-like surface. The barrel’s end piece features fine grooves resembling arrow slits; the cross moline, which was considered a sign of hope, decorates the cap crown.

The barrel is made of Damascus steel and has sword blade-like details, including the indentations designed to represent the “blood grooves,” which add stability to a sword while lightening its load. A sword’s handle was often wrapped in leather, represented here by the brown fluted gripping section.

I might add that this is one of my favorites among the Pen of the Year writing instruments. The use of Damascus steel for the barrel of the pen – not often seen in pen making – is brilliant.

Sparta and its mythology come alive in this limited edition writing instrument, where the design and workmanship is based on the armor and weapons used by the Greek heroes. For example, the ruthenium-plated, sandblasted matte barrel reminds me of the Spartans’ steel battle dress, and the pen’s milled decoration pays homage to the striped armor.

Designed as rivets reinforcing the ancient armor, seven hand-applied rough diamonds totaling up to 0.35 carats adorn the body, and the spring-loaded clip looks like a Greek warrior’s helmet. An all-black edition was also introduced that year.

The Samurai is an homage to the warriors who were considered military nobility in medieval and early-modern Japan. The Samurai is distinguished by its dark barrel made of stained and polished magnolia wood embellished with Japanese characters, worked by hand in 24-karat gold.

Quoting the samurai warrior and philosopher Miyamoto Musashi, it reads: “Today I win against myself of yesterday.”

The Imperium Romanum (Roman Empire) is made from statuario marble from Carrara, and its cap features an engraving of the Colosseum.

The pen is crowned by a miniature Roman coin modeled on a very rare silver coin from 44 BCE depicting Caesar.

The 2017 Pen of the Year is an ode to the Vikings with a platinum-plated barrel inspired by the graceful curves of Viking longboats.

Slivers of curly birchwood are integrated into the design of the fountain pen and rollerball in a nod to the wood used in Norse boat making.