The average person might argue that the least complicated way to move something is by moving it in straight line: just push and it moves. But real life doesn’t work that way; physics doesn’t even work that way. Constraining motion to a straight line is actually fairly difficult because once you gain the right perspective, nearly everything is moving along an arc or other complex path.

Within that context, most force is by default actually a torque or a measure of force acting at a distance from a pivot or center of rotation. Let’s take a stationary apple dropped from arm’s length; most would say it falls in a straight line directly to the ground. But when viewed from an external frame of reference, it falls along a curved path as it rotates with the surface of the earth, falling toward the center of gravity of the earth and at the same time the sun. All things that are attracted by the pull of gravity fall along an arc because there is no truly stationary point in space.

But that might be too hypothetical, so why don’t we bring it down to human scale: imagine pushing a heavy block along a slider that is straight and flat using just your fingers. You might think that you are applying force in a straight line since it is moving in a straight line, but you aren’t pushing anything. Your muscles can only apply force by contracting, so they are pulling against the tendon and bone they are attached to. These bones are pivoting around a system of joints, meaning any “pushing” force you think you are producing is actually a complex series of rotational pulling forces combining to make what appears to be linear motion.

Translating this to industrial engineering, let’s consider the linear actuator, a device that converts rotational force into linear motion. Nearly every linear actuator, be it mechanical, pneumatic, hydraulic, or coiled, uses rotational force to create the required motion, either using gears, cams, pulleys, screws, or pumps. Electric motors, which usually drive all these systems, use rotating electromagnetic fields to create the rotating mechanical motion, so even at the level of the fundamental forces, torque is the primary force we tend to use to create motion.

Understanding how force – especially torque – is translated into motion is the study of dynamics,  a core discipline of engineering. Once force is understood, one must understand how types of motion are created, and that is the foundation of the study of kinematics, what mechanical engineers essentially practice when designing a mechanism. It can be seen at play across the engineering world, especially in complex mechanical watches. 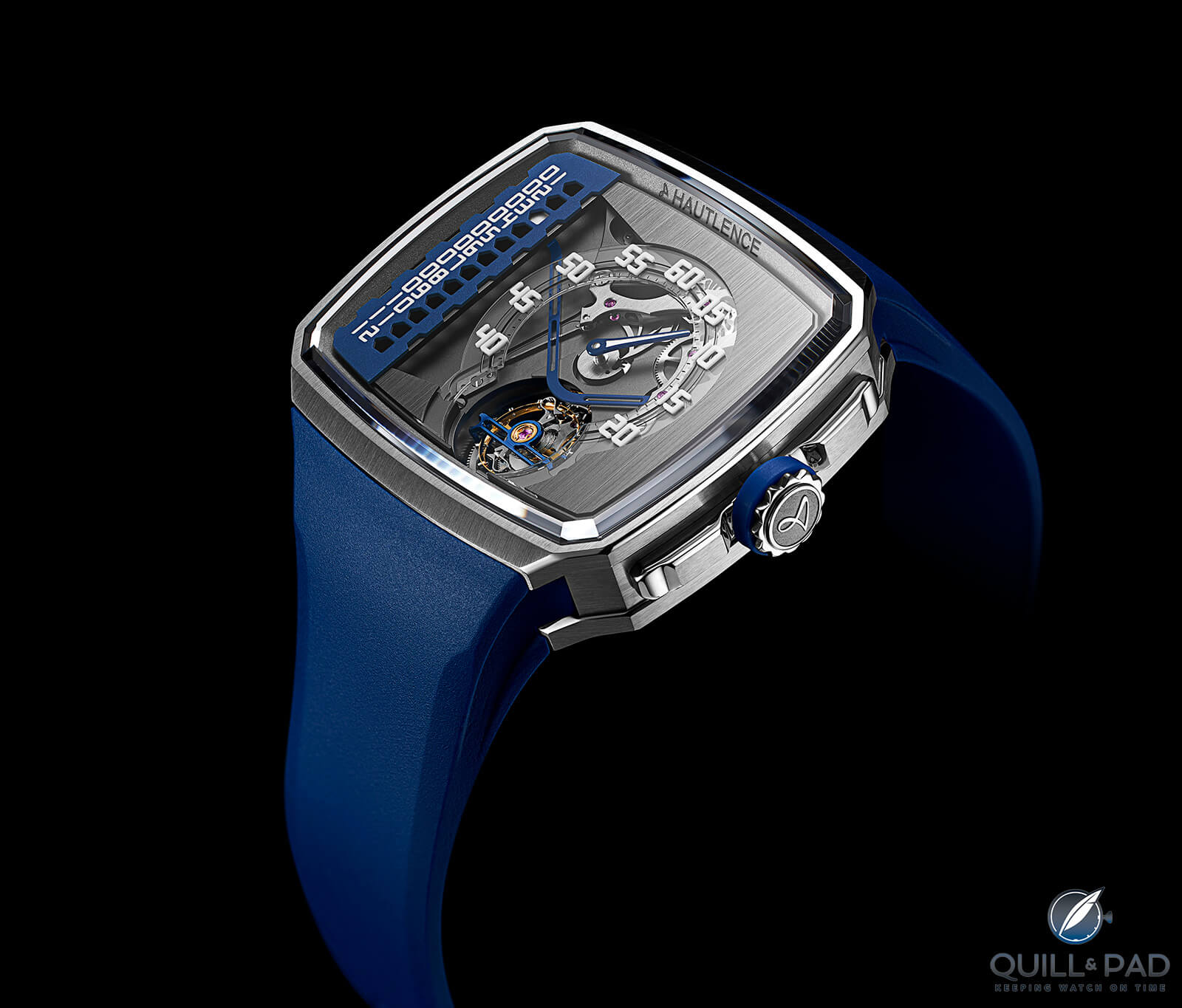 The Linear Series 1, the latest release by Hautlence (one of my favorite brands), is a perfect case study in how rotational force can be translated into linear motion, and it’s an awesome return to form.

Hautlence is a brand that has always done things a little differently, and by a little I mean a lot. From aesthetics to mechanics, Hautlence doesn’t engage in what could be described as classical watchmaking. Almost every model has had a unique take on case, dial, and movement design, leaning heavily on retrograde and jumping mechanisms, culminating in some pretty astonishing pieces like the Moebius, Vortex, and the HL Sphere. But it all started with the HL series sporting a retrograde minute indication linked to a jumping hour mechanism via an intricate set of linkages. 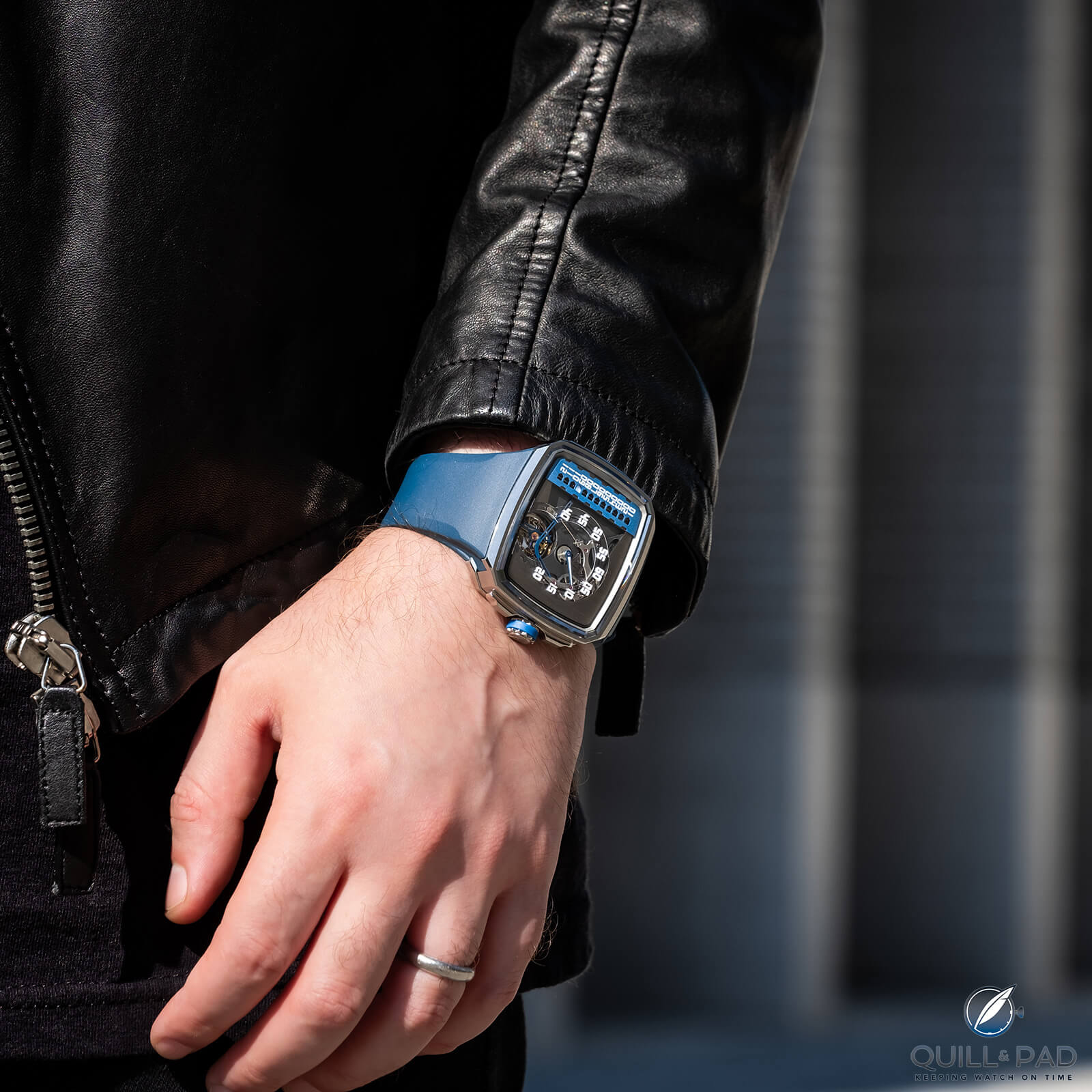 Hautlence Linear 1 on the wrist

Taking a page from its own playbook, Hautlence took the initiative to go back to the beginning so it could flex its creative muscles. The Linear Series 1 has a normal minute display with a jumping hour indication activated by a set of linkages, only this time the jumping indication appears to move in a straight line, hence the “linear” in the name.

On the left side of the rectangular dial we find a vertical hour plate numbered 01-12 in ascending order with little house-shaped windows pointing to each numeral. The actual hour indicator slides along underneath, filling the current hour’s window with a white background, matching the minute numerals on the round dial to the right. 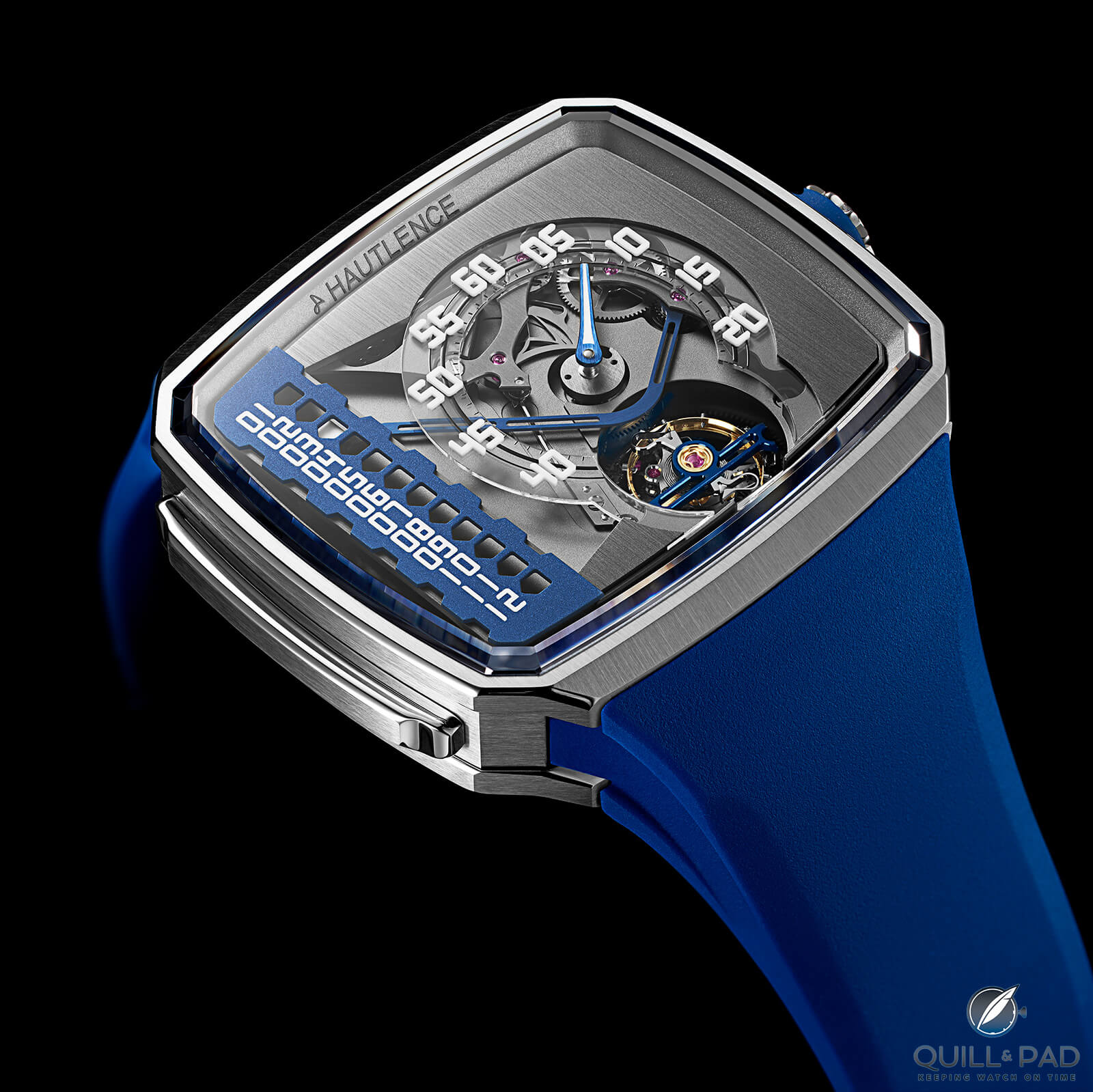 The minute dial has a partial sapphire crystal ring with a notch out between 25 and 40 minutes where a tourbillon spins happily below. Used as a foundation is the Moser automatic tourbillon Caliber HMC 804 modified to match the mechanical aesthetic typically found in Hautlence, now dubbed Caliber D50. This is confirmed with the exposed retrograde mechanism, developed with another favorite company of mine, Agenhor.

One big thing that has changed from the earliest models is the lack of extra detail on the dial: before, there were textures and materials (such as honeycomb) as well as extraneous structures that were only there to add visual flavor. 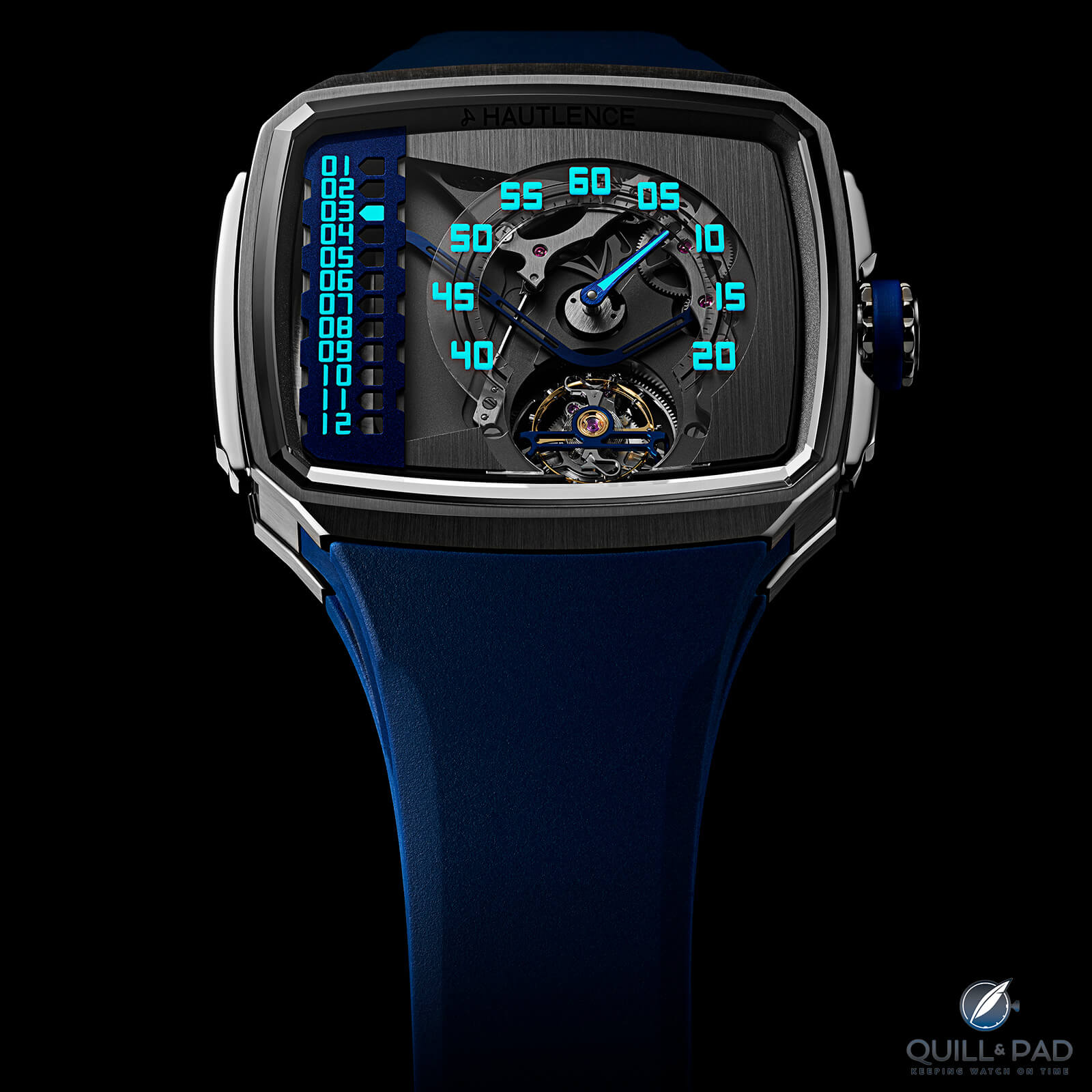 Now, as design trends have shifted, the front of the Linear Series 1 is remarkably clean with the area around the dial completely free of details except for a small, stepped edge immediately before reaching the edge of the case. Only in the center of the dial beneath the sapphire crystal ring is the mechanism visible, peaking out from the edge of the rectangular face of the watch. The hour plate on the left does have a quasi-gear-shaped profile on each edge but it is still a minimal design. This is a smart choice to continue the simplicity seen on a few other models in recent years since the aesthetics are already a stark departure from a classical wristwatch.

On the rear of the Linear Series 1 we are given a clear view of the movement powering the show up front and, like the original HL series, it is not an extravagant construction. The early movements were purpose-built to fit the case, which is not true here. And while that is extremely important for many, using a tried-and-tested base movement by sibling brand Moser is a much better value proposition, especially with the tourbillon in place. 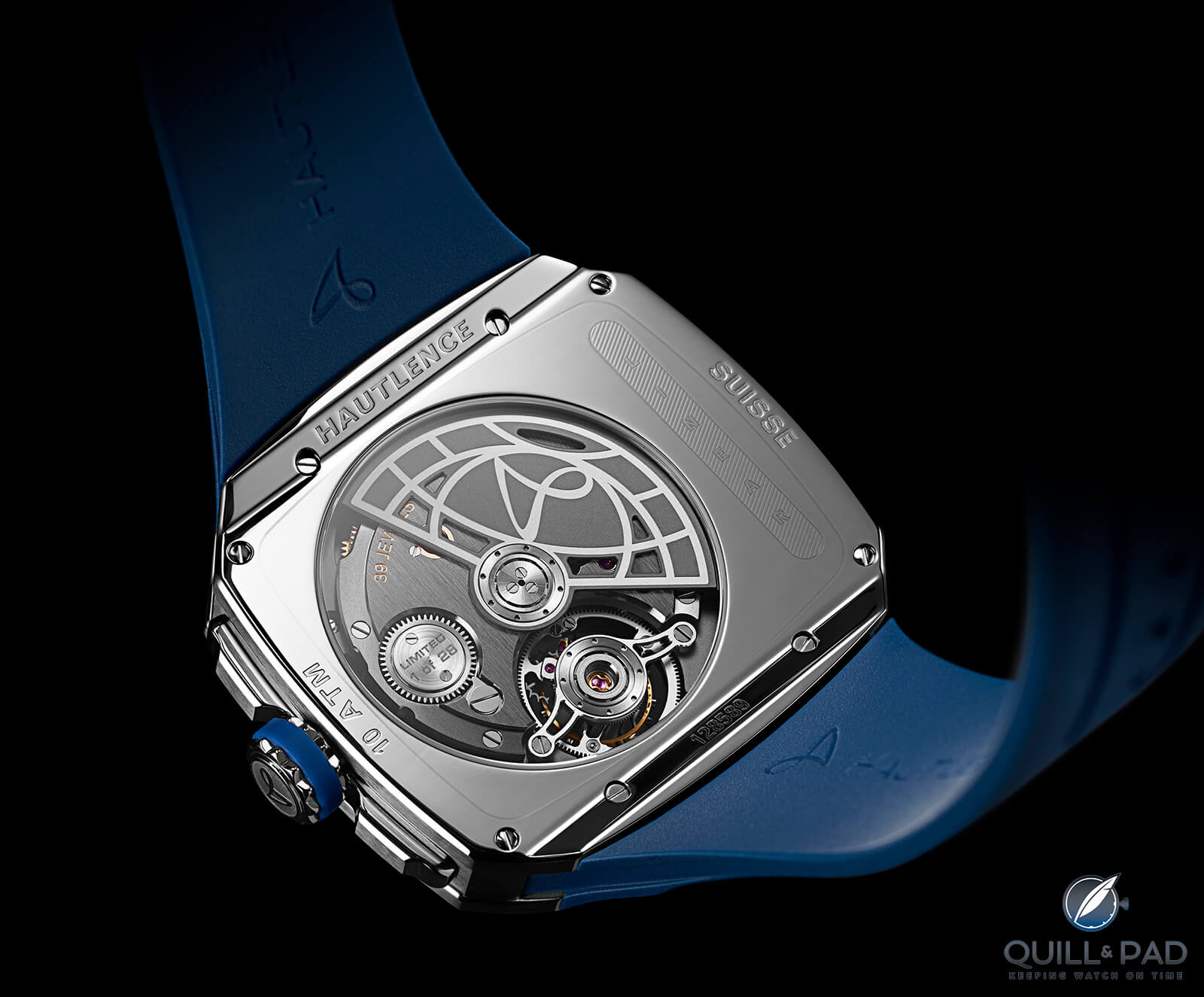 Back of the Hautlence Linear 1

It is a top-notch movement finished to very high standards, and it didn’t need years of development to have a rock-solid foundation. It also allows for more focus to be paid to the unique display mechanism on the front, making the manufacturing costs go further. Since Agenhor is the king when it comes to retrograde mechanisms, it is no wonder that that team did such a good job with such a simple-looking system. As I started this story pointing out how linear motion is difficult to achieve, I should note that a company like Agenhor is certainly up to the challenge.

As previously stated, the retrograde mechanism uses a long lever arm to make the hour indication appear to move in a straight line. I said “appear to move in a straight line” intentionally as once again the force comes not in a straight line but through a curved motion, only at the extreme end of the lever arm does the movement engage with a slider mounted in a track. The white pointer slides up and down freely when not connected to the lever arm but thanks to a slot in the arm it moves up and down as the arm rotates clockwise and counterclockwise, pivoting at the extreme far side of the movement. 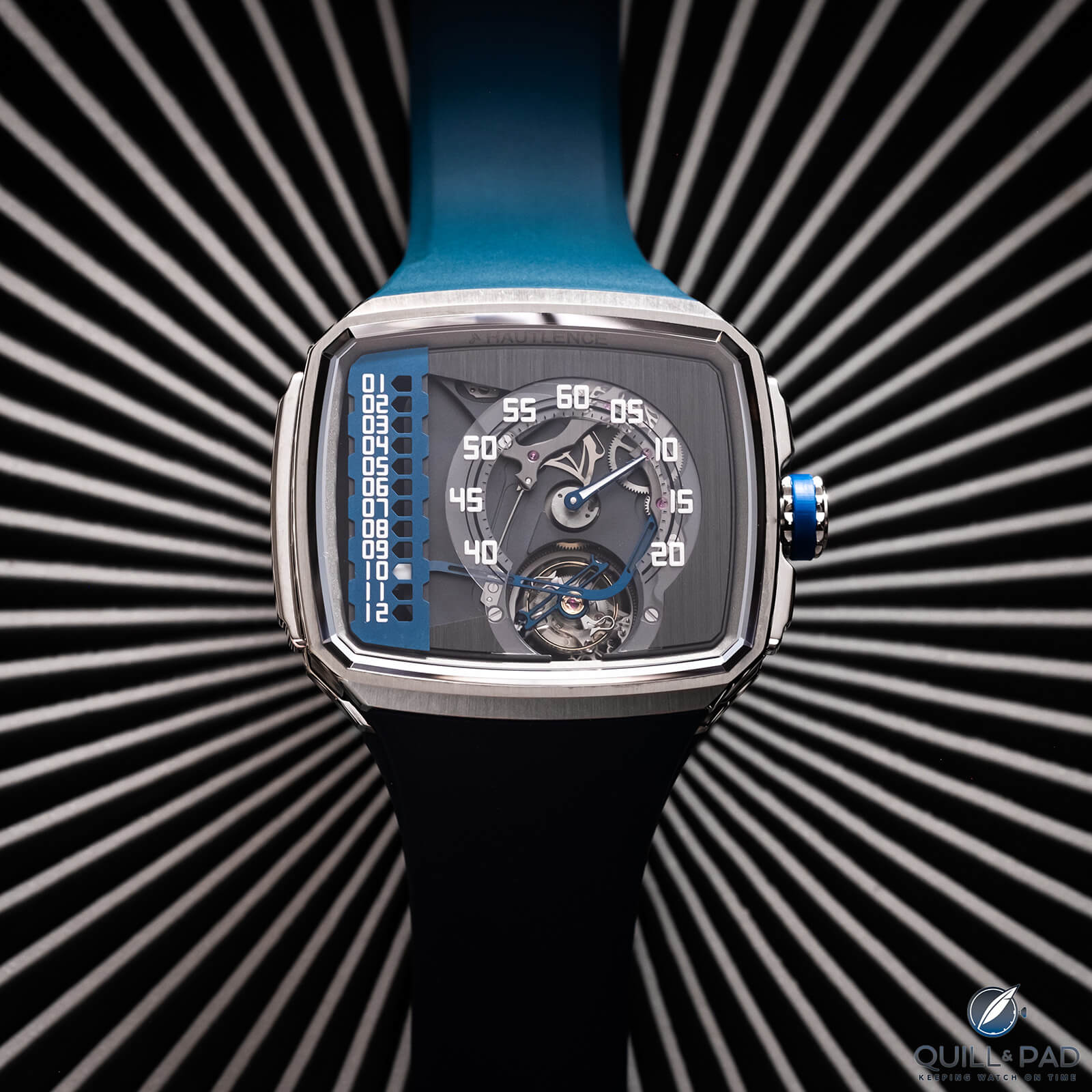 The V-shaped lever arm is driven by a gear train that translates rotation through a series of gears and cams starting at the minute hand. A snail cam is mounted to the wheel driving the minute hand, and a spring-loaded cam follower rides along the spiraling cam as the hour progresses. At the top of the hour the follower falls off the top of the spiral, which allows a sprung finger integrated into the cam follower design to engage with a ratcheting wheel, advancing it one tooth. That wheel has another spiraling snail cam attached, which has a second spring-loaded cam follower riding along its profile.

This follower is mounted to a wheel that drives a small gear train, finally reaching the one carrying the lever arm. Each time the minute hand triggers this mechanical cascade, that last wheel rotates a very specific amount. That amount is just enough to move the end of the lever arm from one position for the hour indicator slider to the next. That movement of the end of the lever is not a straight sweep but an arc tracing the radius underneath the hour plate.

That is why the numerals are on the left side, the end of the lever arm needs to extend past the windows as it travels through its arc, extending the furthest in the center around 6 and 7. This is exactly opposite the wheel driving it, mounted just beneath the 15-minute numerals. The end of the arm has a slot running parallel to its length, which is fitted to a freely moving pin underneath the white indicator. This allows the arm to move along an arc while the indicator slides in a straight path because it slides along that slot. Thus, rotational motion (and torque) is translated into linear motion with each passing hour.

It might seem like a minor thing to translate one motion’s direction to another, but if you master this you can create any motion you want. This is one of the most fundamental translations in kinematics and, taken to the extreme, it creates galloping horse automatons only using expertly placed linkages to create natural, flowing motion out of gears rotating. That is why I absolutely love mechanisms like this, especially one on display, because you start to understand just how motion can be manipulated to do whatever you want. 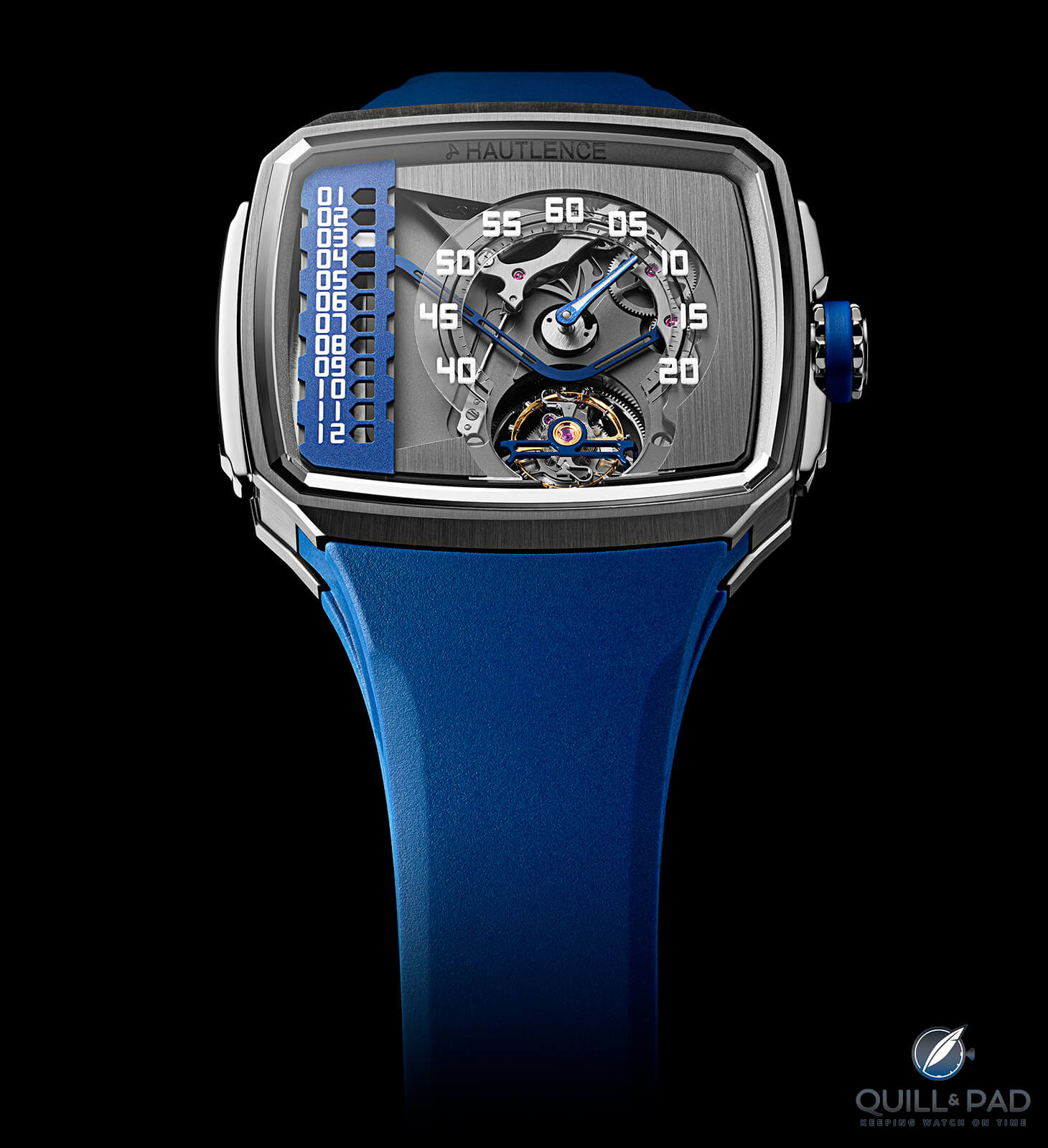 Jumping in a straight line turns out to be a tough thing to do, but Hautlence makes it look easy. The Linear Series 1 is an awesomely clear example of both kinematics and mechanism design (thanks to Agenhor), and after more than a decade and a half it helps the brand return to form.

From the HL to the Linear 1, a lot has come from the brand, and if the watches keep focusing on the core retrograde and jumping hours mechanics, I imagine that Hautlence should have a long and illustrious road ahead.

Risking breaking that long lever arm, let’s break this one down!

Hautlence HL Sphere: The Power Of The Mystical Orb

The Hautlence Vortex: Is This The World’s Slowest Tourbillon?