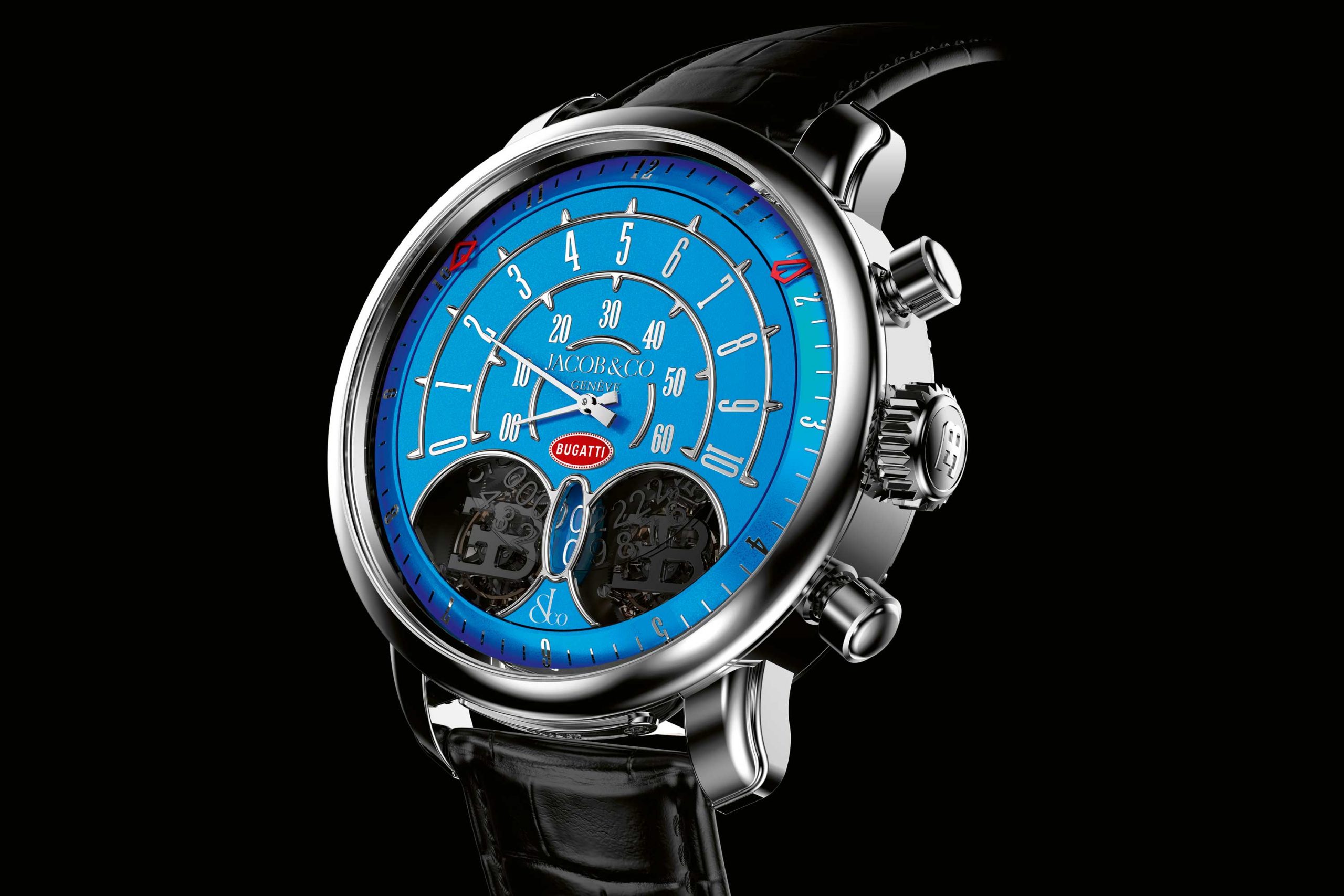 A second snail cam, mounted on the same pivot as the star wheel, makes one revolution in 60 seconds. A braking force is applied on the star wheel as the snail cam pushes against a small lever, controlled by a stopper spring. The cam rotates against a rack lever that drives a pinion for the 10-seconds hand. When the lever drops off the highest point of the cam, the retrograde motion occurs. At the same time, a counter finger mounted co-axial to the star wheel and snail cam then flips the 30-minute wheel by one position, causing the jump of the sapphire minute disk.

The reset hammer is particularly long and convoluted, consisting of various parts as the column wheel is far from the reset button. As the chronograph is running, the reset hammer is held back and hooked by a lever (reset command). When the chronograph is stopped, the brake lever halts the balance while a locking pin on a spring- loaded safety pawl presses against a notch on a security lever, holding the 60-second rack lever in place. Once the reset button is pushed, the security lever returns to its original position by means of springs. At the same time, the reset command lever releases the hammer, which then falls on the heart cam on the minute wheel, causing the sapphire disk to rotate all the way back to the zero position.

While the minutes rely on a traditional heart cam, the hands can’t be reset on demand as they are retrograde systems that rely on springs to gather sufficient energy to power the backward jump. In order to execute the reset, they slowly continue their course to their final position before making the final retrograde leap.

The three mainspring barrels in the movement are wound collectively by the crown. The barrels for the tourbillons provide a 48-hour power reserve and that of the chronograph is two hours.

While Jacob & Co. may have uncharacteristically exercised some restraint on the front of the watch, the complexity displayed on the back is unabashedly true to form. The entire chronograph mechanism is visible on the caseback above a distinctive bridge in the shape of a cat’s ears. It contrasts vividly against a circular-grained, blacked-out mainplate. Right below is the 5Hz balance wheel, which is flanked by two long springs that govern the retrograde actions.

At 46mm wide and 16mm high, the Jacob & Co. Jean Bugatti Tourbillon Chronograph is by no means a small watch, but given the complexity and nature of the movement, the size of the watch starts to seem perfectly reasonable. Additionally, the beauty of this high-beat, bi-retrograde beast is that it has a deceptively simple, resolutely classic and restrained exterior, making it extremely wearable. It is available in two iterations: a white gold case paired with a vibrant blue dial or a rose gold case with a cream-white dial. The case has short, rounded lugs and is entirely polished, setting the stage for the unique chronograph dial.

Located on the periphery of the dial are two small pointers that indicate the hours and minutes. They run on the same scale but are on different elevations and will overlap as the minute pointer catches up with the hour pointer.

The central chronograph display shows the elapsed seconds in units and tens on two concentric retrograde scales. The seconds is indicated with a shorter hand while the longer hand measures the second’s tens, resulting in a spectacle of whipping retrograde hands whenever the chronograph is actuated. In between the two tourbillons is an aperture that displays the jumping minutes. When in motion, it all makes for one of the most visually dramatic dials seen in chronographs.