Louis Moinet Only India Unique Piece: Inspired By The Heavens And The Subcontinent

I have a fascination with meteorites. I guess that is to be expected for someone who loves astronomy as much as I do, I took astronomy courses as often as possible in college even though my major was unrelated. While learning about everything to do with the heavens, the topic of meteorites was always a favorite of mine. While the rest of the universe is out of our reach, meteorites are tangible artifacts of the endless cosmos that humans can hold in their hands. At least for my lifetime.

While meteorites are not uncommon, they are still rare because most space debris that enters earth’s atmosphere burns up before it hits the ground or becomes dust particles that shower the ground. Pieces large enough to be recognizable must then be distinguishable from earthly stones on the ground, be accessible to discovery, and found soon enough that weathering, erosion, or natural events don’t destroy or bury them. In all likelihood, the most incredible meteorites probably fall straight into the ocean and sink into oblivion.

A majority of meteorites discovered come from “meteorite finds,” which is when a meteorite is found and identified well after it has fallen to earth. People spend their lives searching for these, and I have always hoped I would be lucky enough to stumble across one. The much rarer are called “meteorite falls,” which are witnessed and collected. Given that seeing a shooting star or meteor is no indication that you are even within 50 miles of where it lands, this is a stroke of pure luck.

As of August 2021, there have been 1,211 confirmed meteorite falls worldwide, with each stone named after the location where it fell. This rule (yes, naming meteorites has some well-defined rules) results in some well-known meteorites, at least to those who follow the niche. The record holder for largest fall is the Sikhote-Alin, an iron-rich meteorite that fell in the Sikhote-Alin mountains of southeastern Russia in 1947. It broke apart during entry into the atmosphere, showering fragments over an area of 1.3 km2.

Before entering the atmosphere, it is estimated to have weighed around 100,000 kilograms, but thanks to the friction of the atmosphere almost 80 percent burned away, leaving around 23,000 kilograms of material to make impact. Thousands of fragments have been recovered (of which I am the proud owner of one toe-sized piece) making it the best documented and most collected meteorite fall currently known.

And while iron meteorites are incredibly cool, some meteorites are even rarer as they come from the moon (0.7 percent of all known finds) or Mars (0.5 percent). Those percentages plummet even further when you limit them from all finds to solely witnessed falls.

One such incredibly rare fall is the Shergotty meteorite, a five-kilogram Martian meteorite that fell at Sherghati in the Gaya district of Bihar, India on August 25, 1865. This meteorite gave its name to an entire class of Martian meteorites of shared composition that have been found around the world due to being the first specimen of its kind ever discovered. The “shergottites” are all volcanic in origin (as are nearly all Martian meteorites) and demonstrate a period in which Mars was geologically very alive. 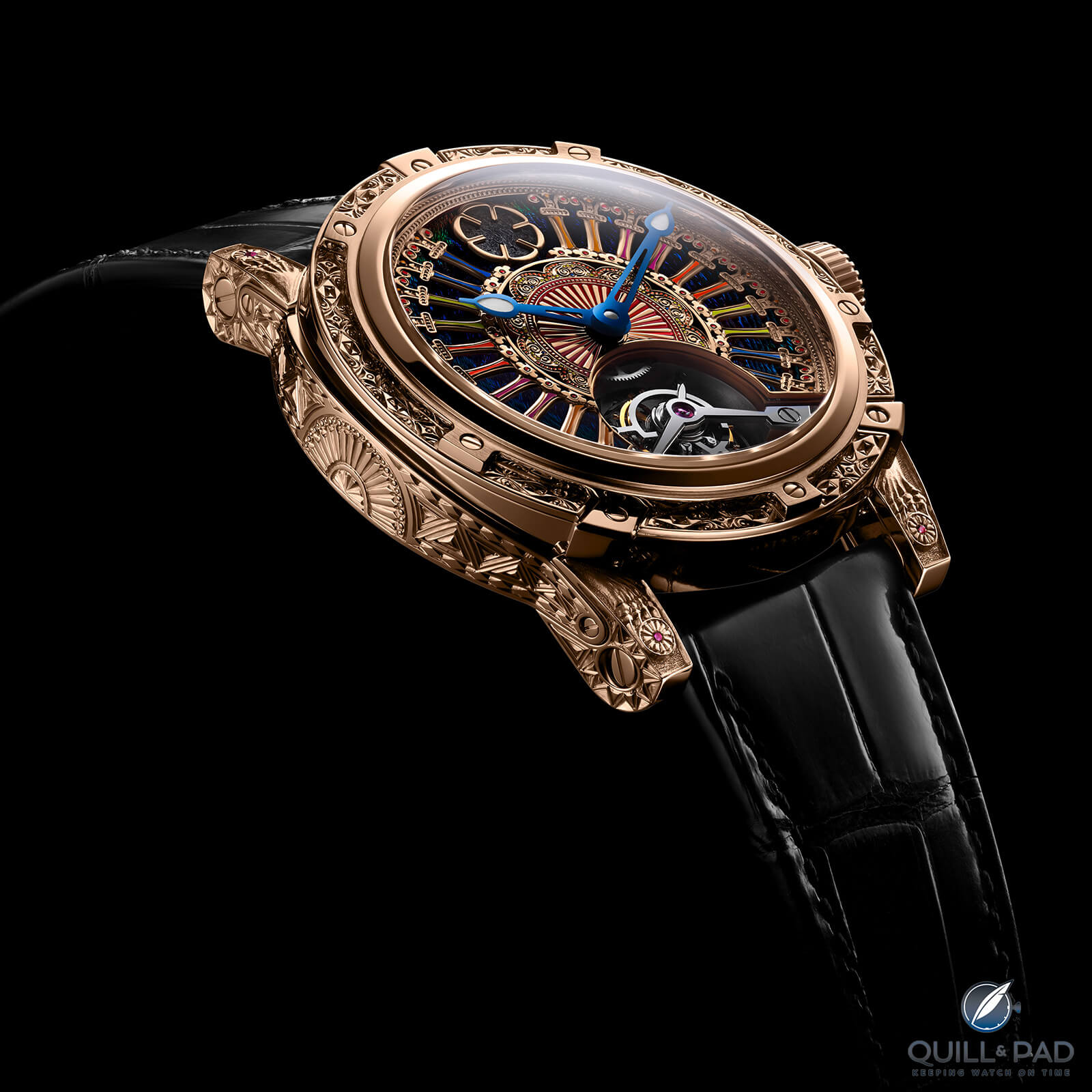 Swiss watchmaker Louis Moinet has acquired a small fragment of the original Shergotty meteorite, using it as a centerpiece for a timepiece honoring aspects of Indian culture. Named Only India, this unique watch not only demonstrates Louis Moinet’s commitment to finding the rarest pieces of earth’s history to share with the world, but a boldness of aesthetic that we have come to expect from the brand. The Louis Moinet Only India is an intricate and colorful display of craftsmanship with a celestial hook I can’t ignore.

If you took Only India at face value alone, the level of detail would be enough to keep you intrigued for hours, to say nothing of the expanded meaning behind most of the decisions on this timepiece. Like many watches by Louis Moinet it is not excessively complicated, displaying only the hours and minutes plus a 60-second tourbillon whirling around at 6 o’clock. The brand has its fair share of chronographs, minute repeaters, and automaton displays, but the core of Louis Moinet is a time-only tourbillon with decoration to the max.

Only India is a fantastic example and like many before it, it centers around the meteorite fragment embedded in the dial. The Shergotty meteorite is intrinsically tied to India and so it made perfect sense to sculpt this timepiece around that adopted identity. The dial and case are intricately engraved with symbols from Indian culture; the dial substrate hearkens to the national bird of the nation; and it is capped off by the meteorite fragment wrapped in a golden sheath resembling a flower. 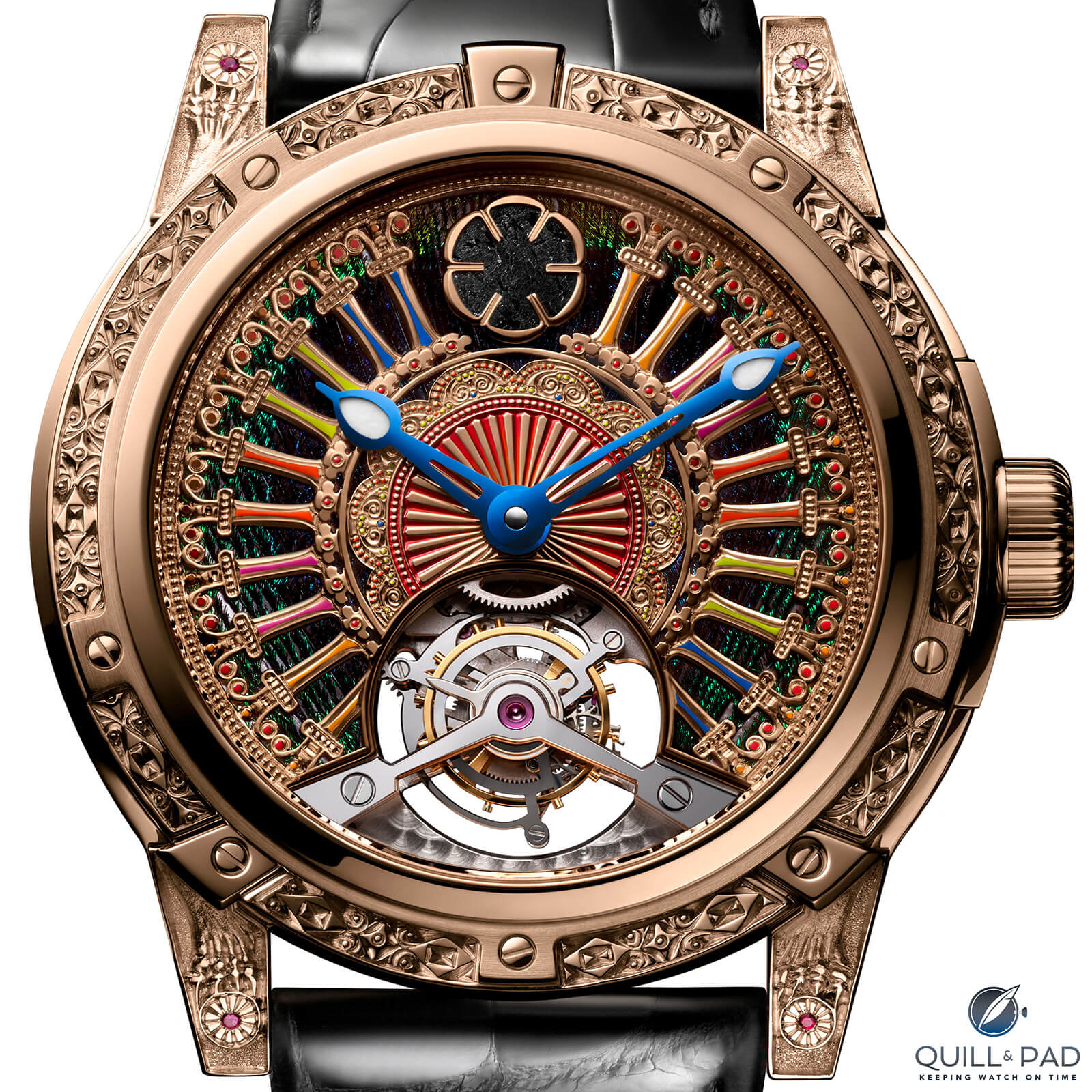 The dark fragment of meteorite is offset by the extremely colorful micro painting covering the engravings and the iridescent peacock feather underneath. The peacock is the national bird of India, officially selected in 1963 following centuries of cultural significance. The bird, depicted as the mount for the god of war in Hinduism, is found on the crest of Lord Krishna and was inspiration for the ancient Maurya Empire. This empire was founded by Chandragupta Maurya in 322 BCE who was so named because his ancestors settled in an area abundant with peafowl; they became known as the Moriyas, meaning “belonging to the place of peacocks.”

Beside being a symbol of the nation and major religions in the area, the peacock acts also as a token of royalty, elegance, and pride, leading to the medieval Mughal emperor’s seat of power being nicknamed the “peacock throne.” To the rest of us, the peacock is a stunning example of the beauty of nature: the bird’s multicolored feathers glow with iridescence. And here it shines out from the underlying dial.

If the complexity of the peacock feather is not enough for you, then the engraving spread across the dial is sure to catch your eye. It is based on the Ashoka Chakra, the 24-spoked Buddhist version of the wheel of Dharma, which is an important symbol in many South Asian religions. The exact number of spokes on this dial is 20 (due to the tourbillon and meteorite) but the number of spokes vary on different uses of the symbol. Originally, the simplest pre-Buddhist version had six spokes before it became associated with the Eightfold Path the Buddha prescribed and it grew to eight spokes. 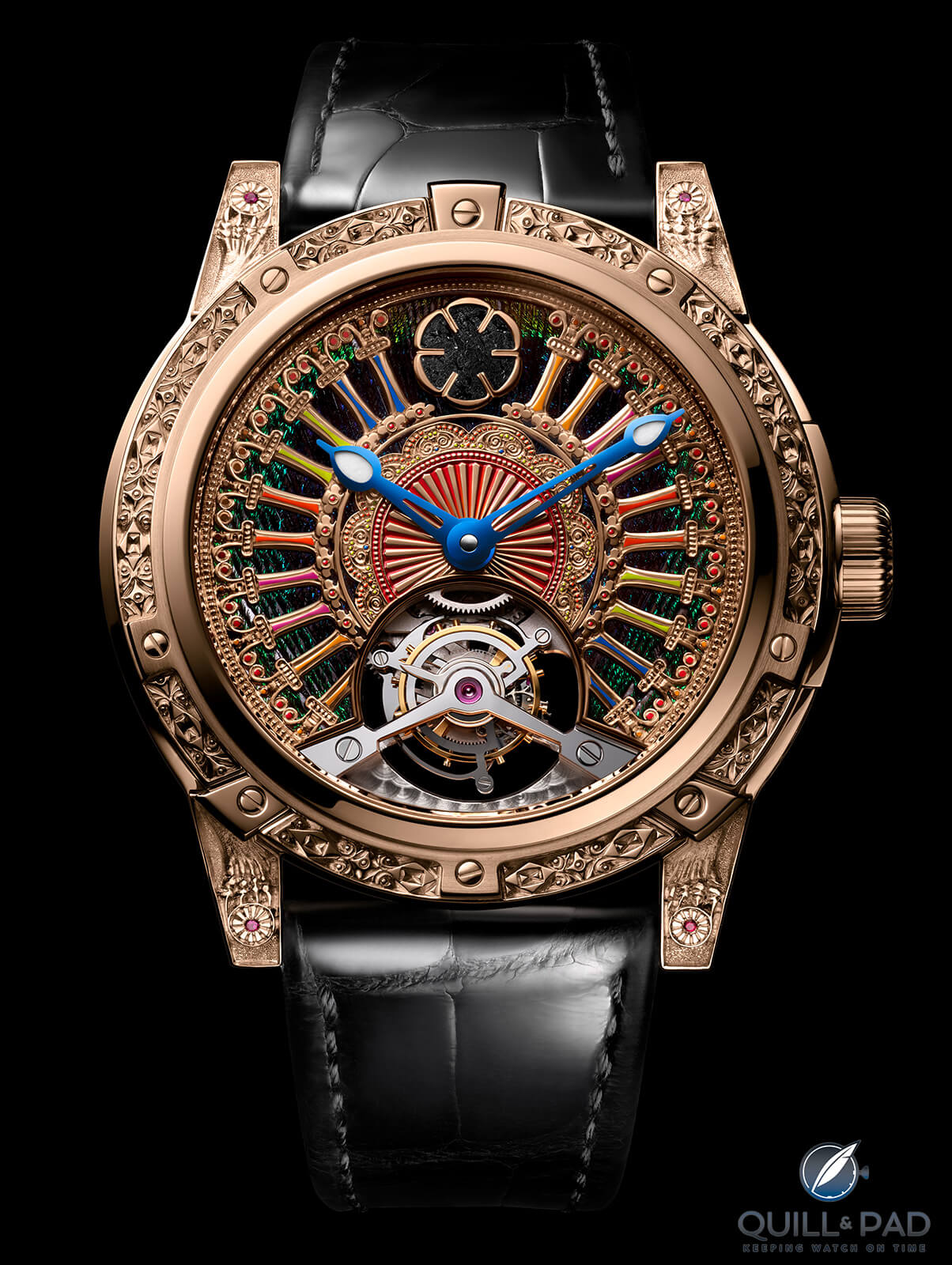 The 24-spoke wheel, which this version closely resembles, is a more widely used version to represent the 12 casual links of Dharma in forward and reverse and has been adopted as the symbol of India’s national flag. The version on the Only India watch takes great liberty with flourish, decoration, and elaborate capitals and bases of the spokes, which look like architecture and provide areas for micro painting.

A variety of colors mimicking the peacock feather have been painted on the spokes and in key areas, including the center hub, which is like a miniature version of the more basic Ashoka Chakra found on the Indian flag. The multiple layers of engravings creating at least five concentric circles provide incredible visual movement, keeping the eye scanning the dial just to take it all in.

As I previously mentioned, the Shergotty meteorite rests at the top of the dial in a flower-shaped ring of gold (quite possibly a Madagascar Periwinkle, an ornamental flower naturalized in India) and balances out the large tourbillon aperture at 6 o’clock. Still visible are the bezel “spokes” that are often reflected in the tourbillon bridge and other dial components, now all hidden except for the tourbillon bridge. Outside of the smooth bezel ring we find more engraving that adds geometric patterns found in a variety of Indian art and architecture.

On the side of the case is more geometric engraving and another depiction of the Ashoka Chakra in the center, while each lug features a lion’s foot on top of one more wheel of Dharma with small rubies set as each wheel’s hub. This imagery is reminiscent of the Lion Capital of Ashoka, a sculpture dating to 250 BCE (under another Maurya emperor) and the origin of many other depictions of the wheel. The side of the lugs feature a sun motif surrounding the strap screws, one final allusion to the Indian subcontinent.

Inside the Only India piece ticks Louis Moinet’s LM-35 tourbillon caliber, an award-winning chronometer that placed first in the International Chronometry Competition in 2015. Previously named Caliber 8009, the LM-35 was able to survive four months of continuous testing, including impacts, magnetic fields, and detailed observation of accuracy and consistency. Only six out of 28 watches even completed the tests during the competition, showcasing just how brutal the tests are and how impressive the LM-35 really is. 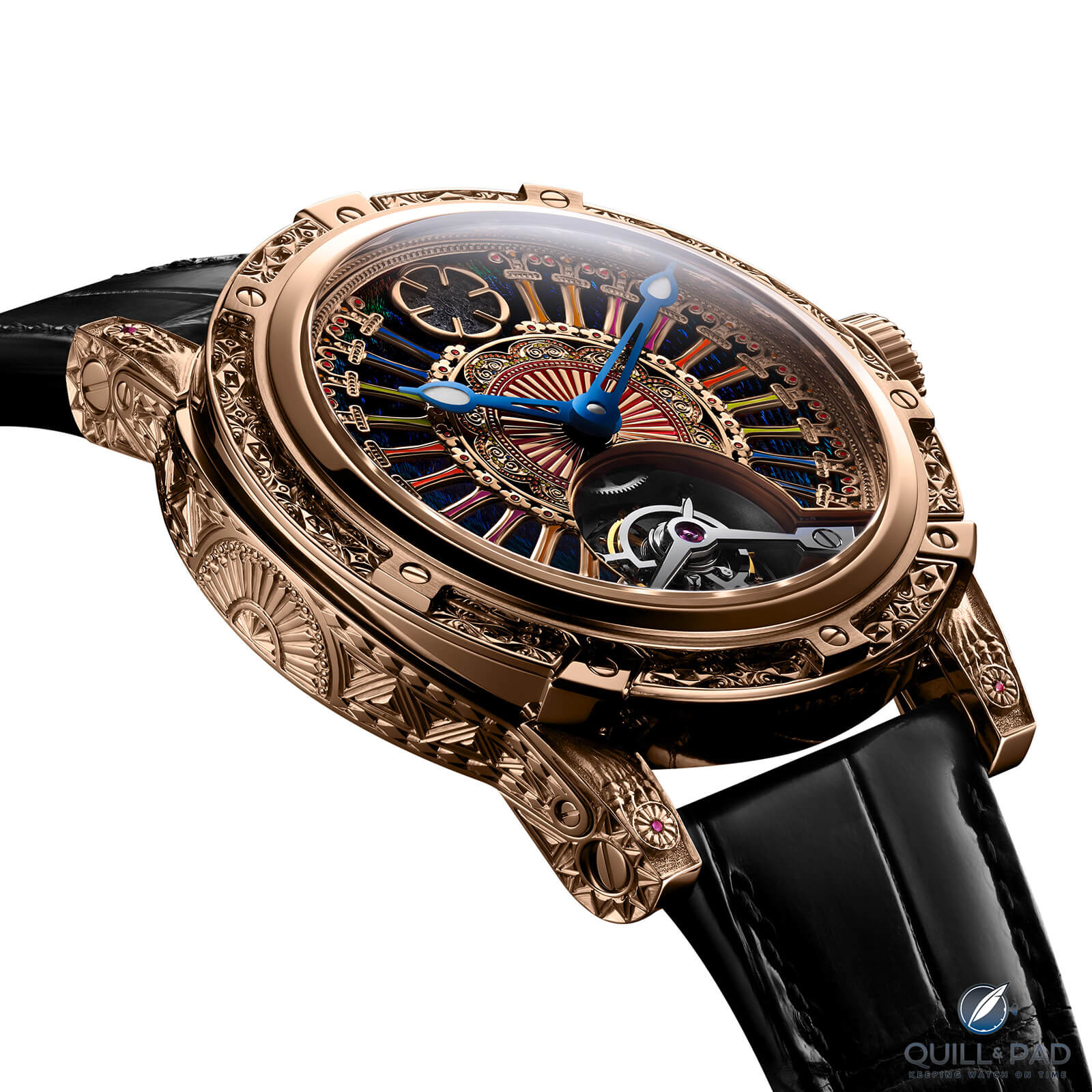 You probably wouldn’t want to terrorize the Only India watch like that (it is just too beautiful), but you can rest assured that the watch will provide incredible timekeeping and longevity should you be the lucky person to take home this unique piece. And that might be the only sad aspect of the watch: there is only one and it’s unlikely to ever find its way onto my wrist. Alas, that is true of so many watches, so my appreciation must remain from a distance.

The craftsmanship found in Louis Moinet pieces is truly on display with this watch’s engraving and micro painting as well as the ability to craft a dial with such features, not an easy task. It is definitely a bold watch, but for that special someone it will become a conversation piece for a lifetime.

And it all started with a chunk of Martian space rock that blossomed into a fully detailed celebration of a country and culture, something that Louis Moinet is known to strive for. The brand never lets an idea go to waste, and the Only India watch shows what is possible when you truly understand a theme and give your artists space to create.

Since we know the movement will survive almost anything, let’s break it all down!