It wasn’t always this way.

From the launch of the landmark 1518 perpetual calendar chronograph in 1941 to the Patek Philippe jubilee year of 1989, simple wristwatches reigned and paid the bills.

The number of minute repeaters, split-second chronographs, and tourbillon watches – both pocket and wrist – amounted to single digits or low double-digits per year. This was true at Patek and within the greater industry. Anything more than a perpetual calendar or chronograph would require a discussion, a bespoke order, and possibly an interview to confirm that the buyer was serious.

In the years prior to 1989, even Patek Philippe focused on simple watches. Audemars Piguet was the most prolific high-end source for innovations in calendar and tourbillon watches during the 1980s. To the extent that any manufacturer of wristwatches was known for minute repeaters, it was Gérald Genta, not a “holy trinity” label, that was renowned in the space. 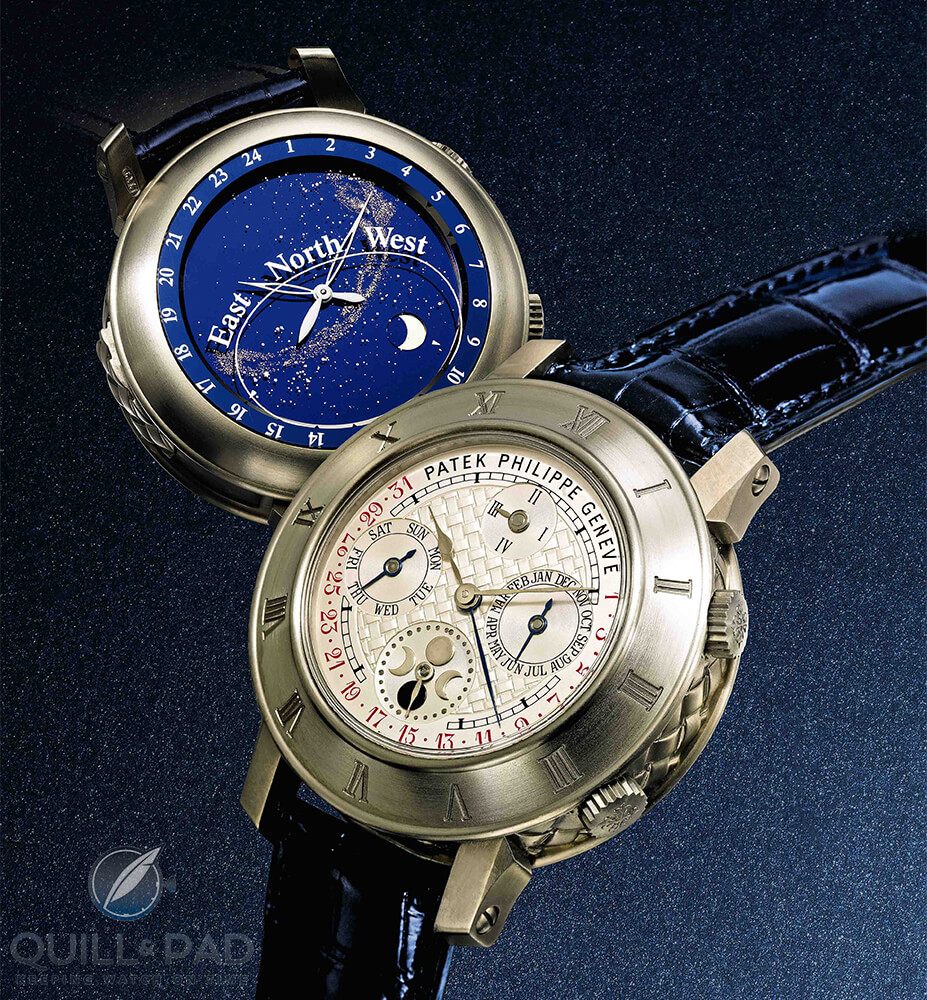 Patek Philippe hailed 150 years with a veritable onslaught of commemorative editions including all-new models. The Calibre 89 was the flagship. Double-dialed and sized like a grapefruit, the 89 became the latest in a long line of record-breaking Patek pocket watch complications. With 1,278 pieces, 126 jewels, and 33 functions, the Calibre 89 was a showcase for Patek’s competence. Five years of development yielded a production total of four watches, but Patek Philippe had cemented its reputation as an occasional source of awe-inspiring complicated machines.

At the tail end of a torrid decade of complicated watchmaking, Patek Philippe greeted the new millennium with the Star Caliber 2000. Yet another pocket watch, this one boasted 21 functions; it was the third most complicated Patek Philippe of all time after the Calibre 89 and the 24-function Henry Graves Supercomplication delivered in 1933. More importantly, the Star Caliber was the only member of this elite club to inspire a wristwatch spin-off. 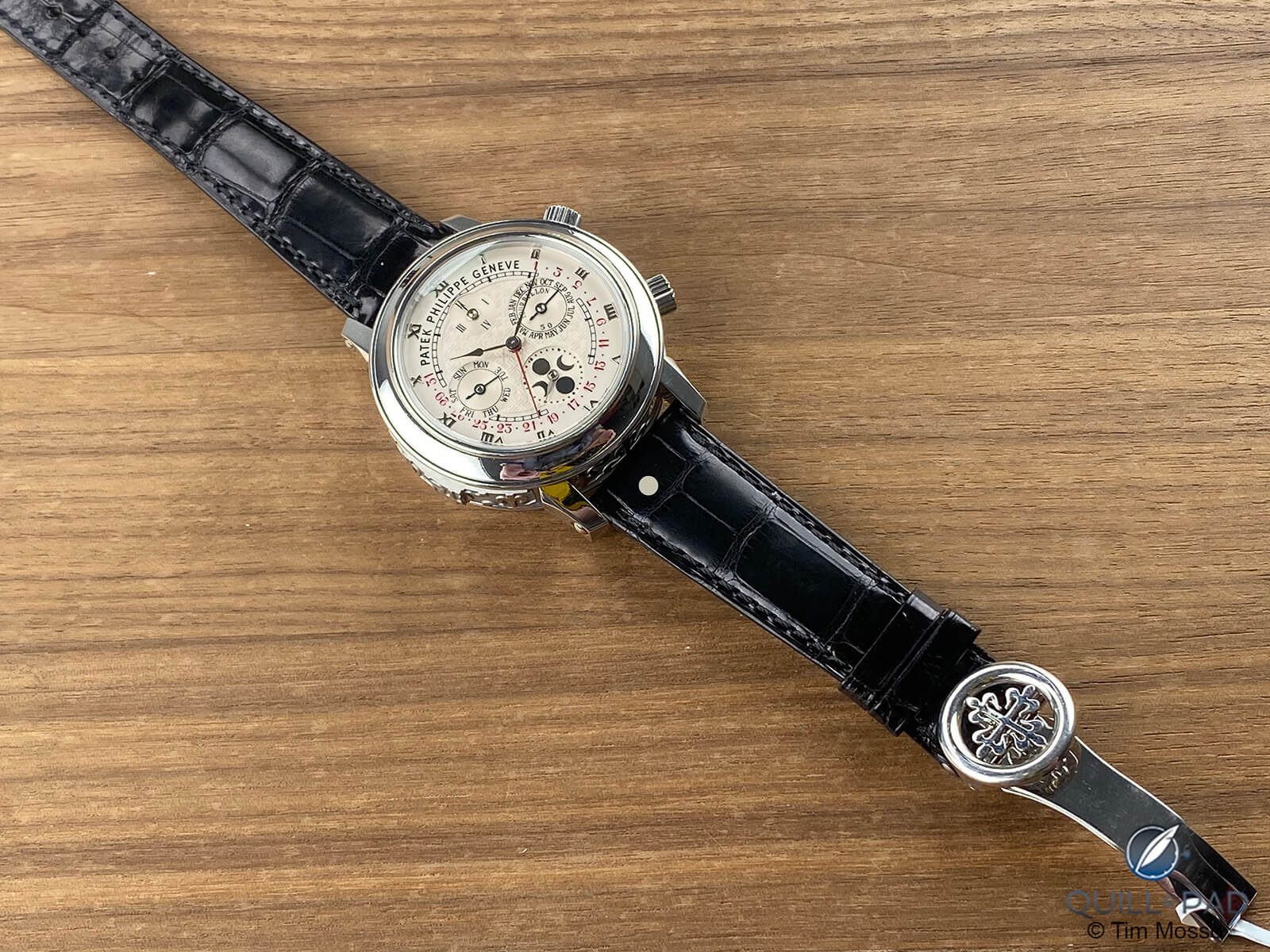 And what a spin-off it was: the Patek Philippe 5002 Sky Moon Tourbillon.

Launched in platinum for the 2001 model year, the 12-complication metal megalith mirrored the dual-dial Star Caliber in both style and function. 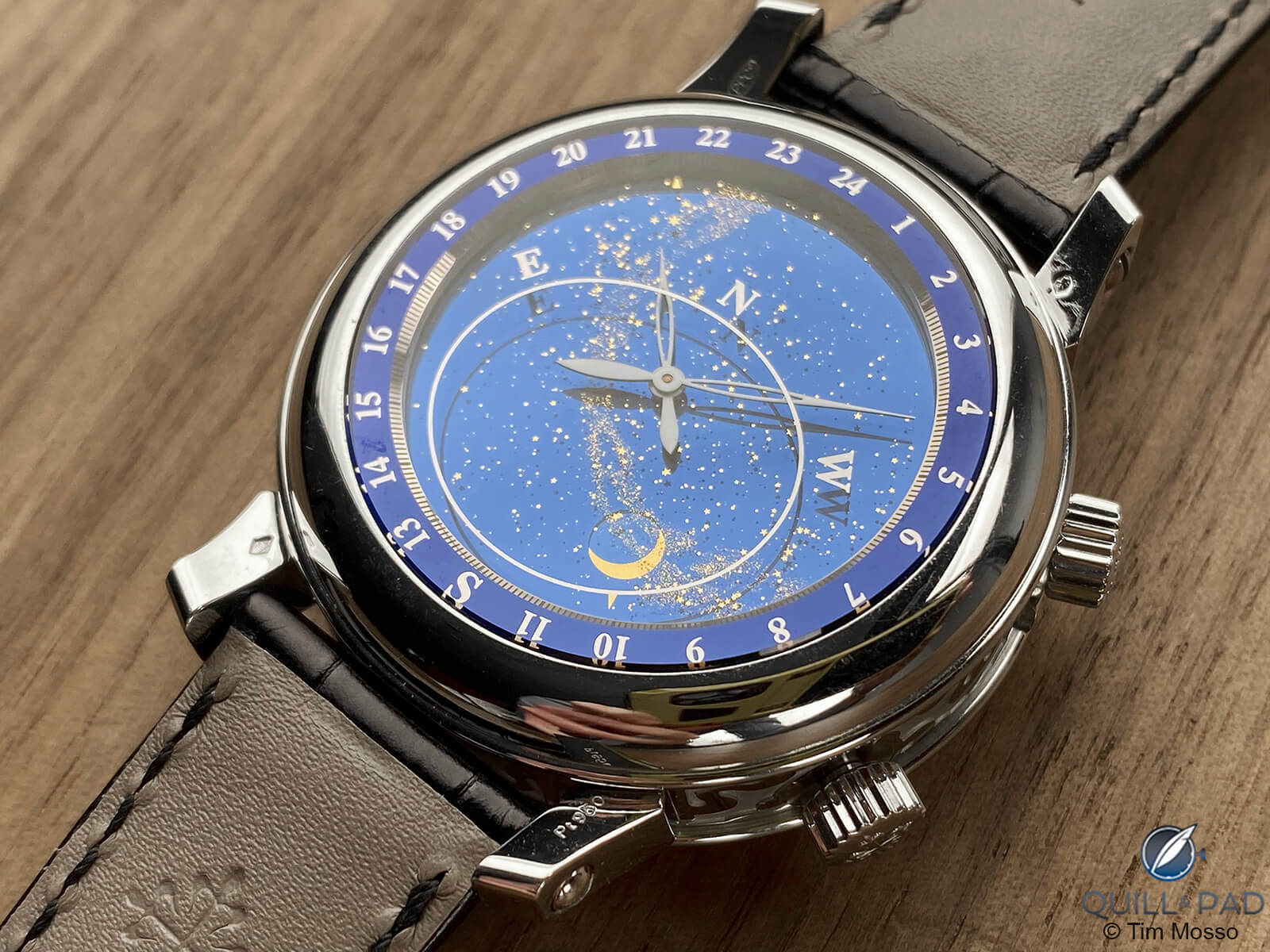 Dial one was devoted to a moonphase indicator and a perpetual calendar with retrograde date display. On the sub-dial display for months, simple text promised a tourbillon regulator within the case.

As was the longtime custom with Patek Philippe tourbillon watches, the 5002P bears its movement serial number on the dial. 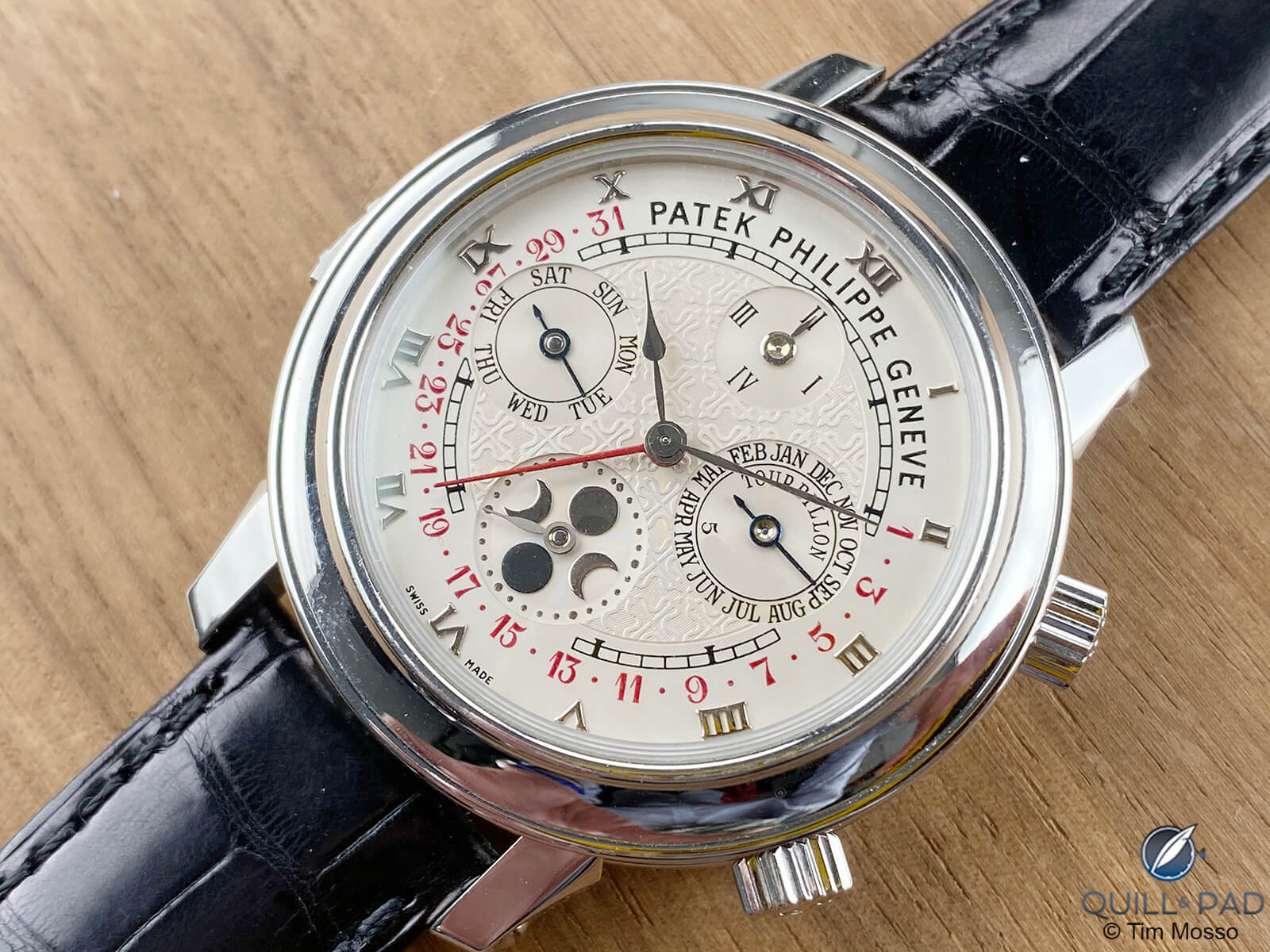 The second dial – a first for a Patek wristwatch – bore the mark of the Star Caliber. A sky chart dominates proceedings with the image of a northern hemisphere night sky. The moonphase and its relative position in the sky are depicted. Simple hour and minute hands at center follow a 24-hour format for contrast with the sidereal day depicted by the sky chart.

Mean solar time – featured on the front dial – is the time your clock reads noon; this may not coincide with true solar time, which involves the sun being perfectly overhead when the clock reads 12pm.

The Sky Moon Tourbillon buries the lede by omitting its cathedral gong minute repeater from the name scheme. Patek Philippe’s modern reputation as a leader in chiming wristwatches largely is a product of the 1990s. It learned fast. 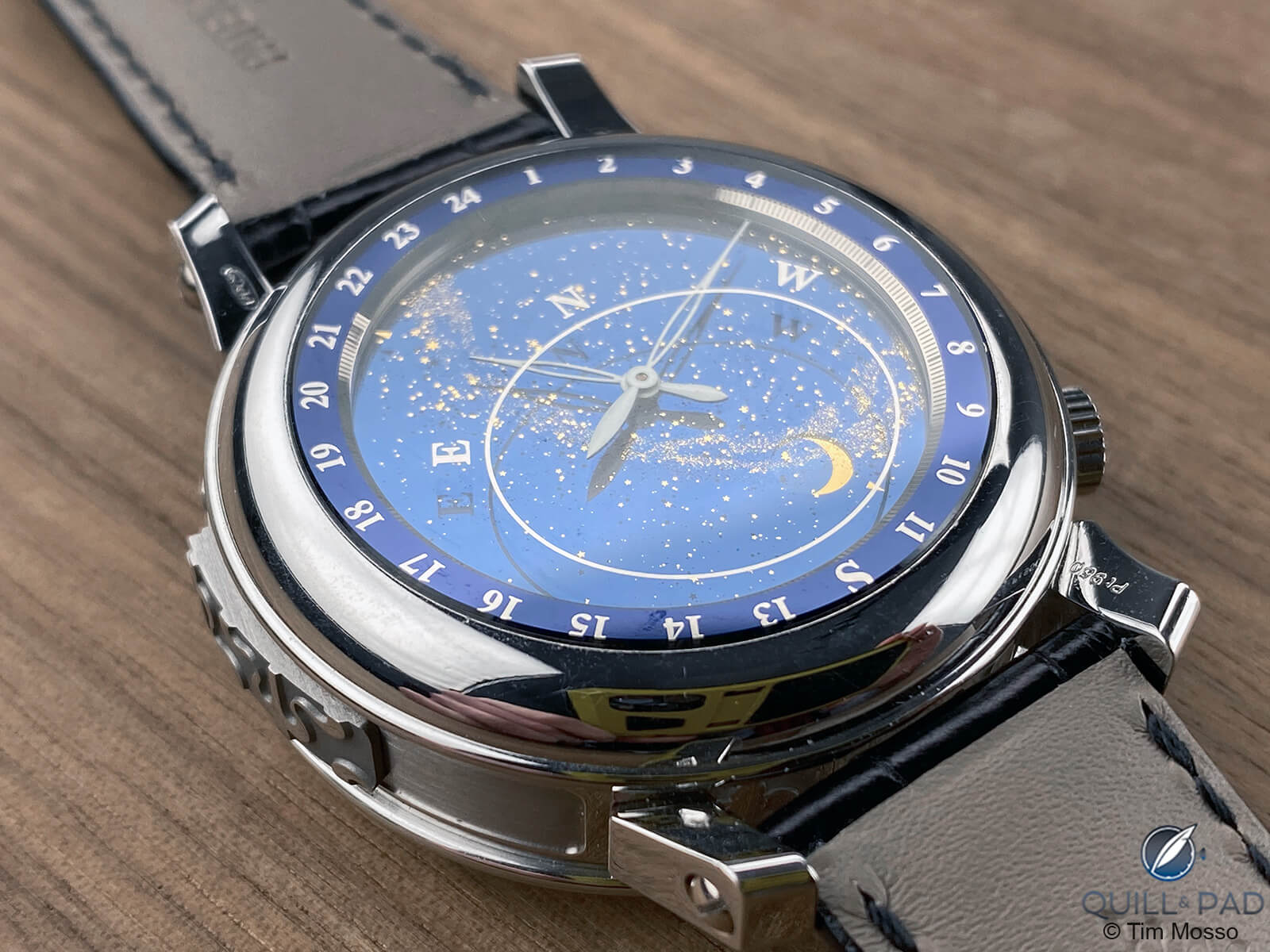 By 2001, Patek watchmakers were ready to embed high-grade wrist chiming within multiple layers of secondary complications. The quality of the sound was superb; each 5002P employs “cathedral” circular gongs that double around themselves 1.5 to 2 times when compared to the single-loop gong of a conventional minute repeater. These resonators defined the 38mm outer diameter of the movement and account for most of the 5002’s near-43mm size.

Extended gongs also help to counter the deadening effect of the 5002P’s platinum case. Sustain, sound quality, and chime volume benefit. Due to the larger suspended gong surface, the 5002’s cathedral gongs also counter the muting effect that blunts repeater sound when operated on the wrist. Later 5002 variants in rose, yellow, and – rarely — white gold benefitted from the same refinements.

In contrast, with its late-blooming fame as a constructor of repeating wristwatches, Patek Philippe’s notoriety for crafting perpetual calendars was decades in the making. Since the early 1940s debut of the 1526 perpetual calendar and the 1518 perpetual calendar chronograph, Patek has built its name as a premier source for watches that can navigate the Gregorian calendar.

That long-running renown might explain why a watch dubbed “Sky Moon Tourbillon” relegated those titular complications while handing dial-side preeminence to a perpetual calendar.

Nevertheless, the aesthetic of the 5002P dial is one of unexpected warmth for such an imposing machine. Guilloché in the form of small Calatrava crosses pays tribute to Patek Philippe’s corporate symbol. Applied white gold Roman numerals and matching white gold hands add an opulent flourish atop the crème-tinted dial base. Moon phases are portrayed in gold slivers. And shocks of red distinguish the retrograde date display while enlivening the color palette.

Patek Philippe’s branding of the 5002P throws caution to the wind. The enormous vaulted “PATEK PHILIPPE GENEVE” ranks among the largest ever struck – and that includes pocket watches. 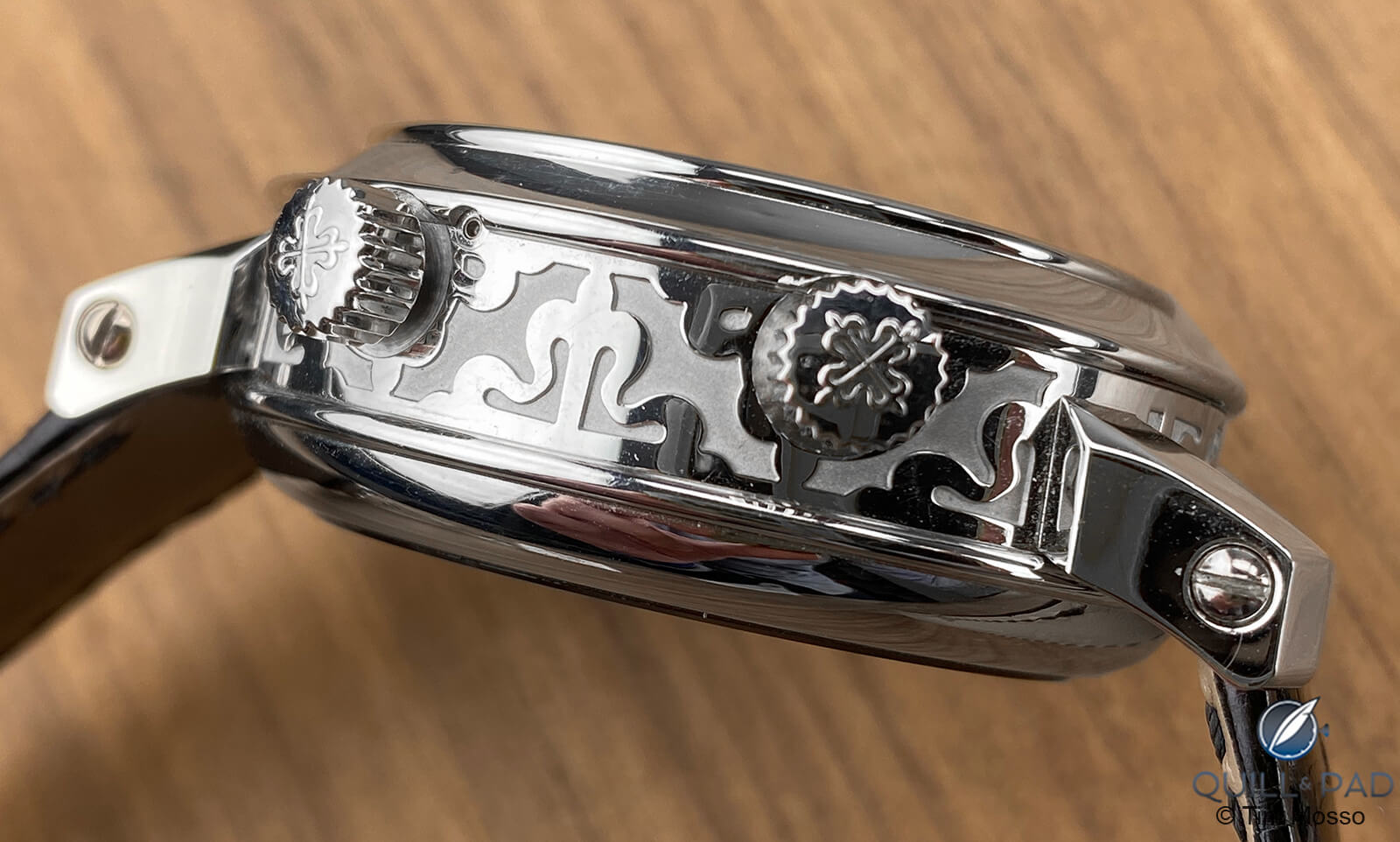 Each 5002 – regardless of metal – employs an elaborate set of circumferential engravings. A repeating Calatrava cross motif echoes the dial while girdling the 42.8mm case. The cross-festooned repeater slide sits within a recessed channel – an innovation often attributed to longtime Patek collaborator and case manufacturer Jean-Pierre Hagmann.

Although massive, the 5002P’s case is a nuanced brick of platinum. Its concave upper bezel includes inner and outer flanges that read as character lines. The lugs are stepped where they join the case, and the assembly method is by old-fashioned – and laborious – welding. Given this watch’s size, weight, and heart-stopping value, screws and bars replace spring bars as the chosen method of fixing the strap to the case.

Two crowns are present. The one at four o’clock sets the primary dial; the one at two sets the celestial dial.

It’s worth mentioning that despite the presence of twin dials, the 5002 is not a reversible watch. Only the front dial is designed to be seen on the wrist, and downward-canted lugs defeat whimsical notions of simply reversing the strap and folding clasp.

That said, the reverse of the case is designed to be seen. The domed bezel reverses its concave opposite number on the front, but the reverse bezel has no inner flange due to the size of the celestial dial. A rehaut with 24-hour scale replaces the inner flange.

Despite top billing in the model’s name, the Sky Moon’s tourbillon lies unseen within the belly of the beast. And this movement is a beast by any measure. The spec sheet starts with 686 pieces and 55 jewels. Manual winding energizes a 48-hour power reserve. Not only is the movement a stem winder, but its name is a stemwinder: R TO 27 QR SID LU CL. In a nutshell, these are French-language abbreviations for the movement’s functions and its core diameter. 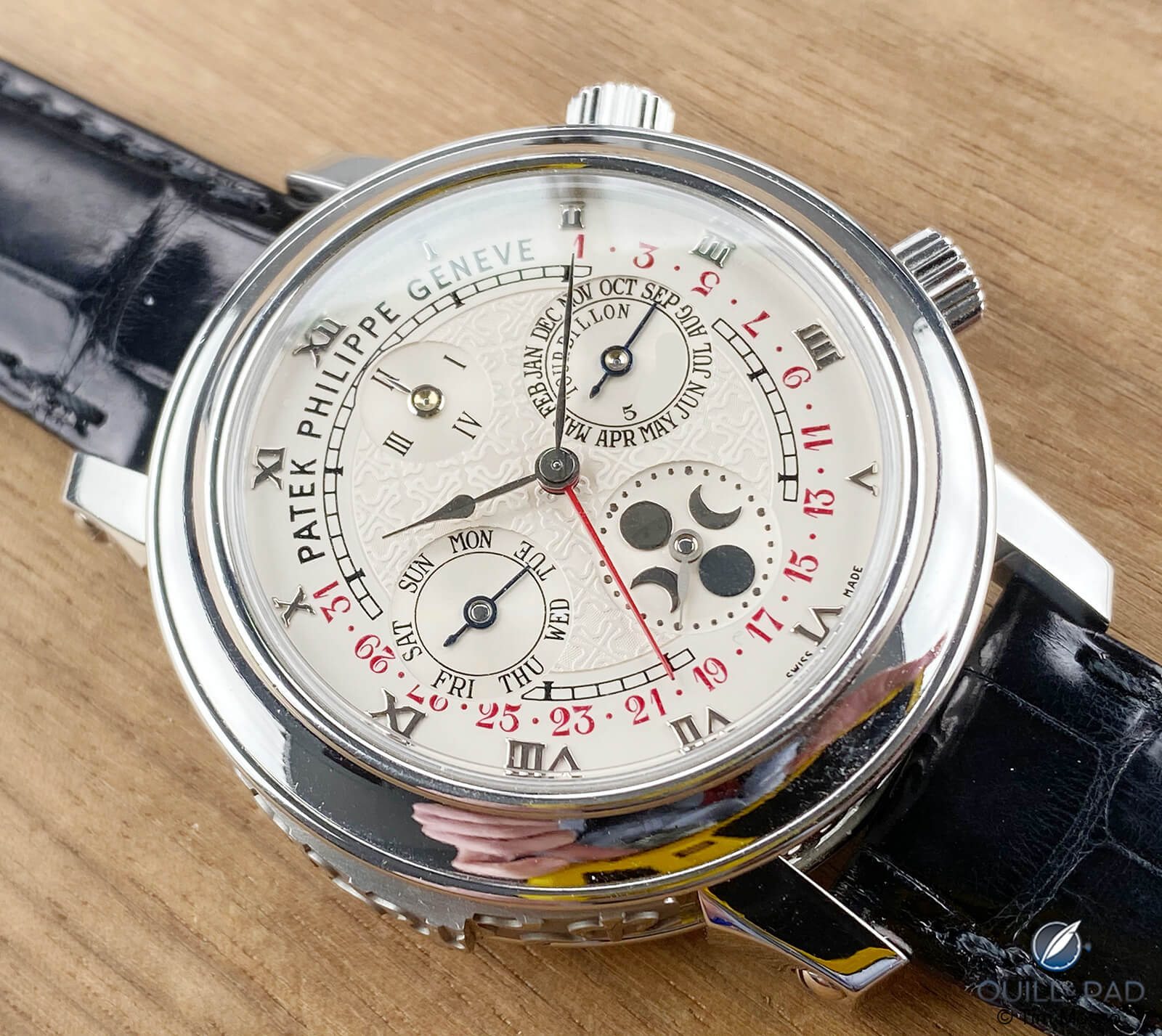 Movement decoration is world-class, but like the tourbillon, it goes unseen by all but the most qualified Patek Philippe watchmakers. Finish is the finest Patek can muster, and unlike workaday movements like the 324, 215, and 240, the guts of a 5002 are executed at a near prototype level of workmanship – not mass production. The wing-like steel balance bridge is rife with sharp inward angles and outward-beveled points; its entire surface has been black polished. A 14-karat gold third wheel stands apart with its intricate finish and flowing, organic spokes.

Longtime Patek Philippe tourbillon standards such as an overcoil hairspring and a Gyromax free-sprung balance are employed; they oscillate at 3Hz. Early examples of this movement included C.O.S.C. Swiss chronometer certifications and the Geneva hallmark. Movements constructed after roughly July 2009 featured the newer Patek Philippe seal while continuing to meet or exceed the ISO 3159 standard governing C.O.S.C. certifications.

How many 5002 Sky Moon Tourbillons were built before production ended in 2012?

A theoretical production capacity of ten per year has been mooted among collectors. That wasn’t always achieved, and the watch’s production run straddles both sides of the Great Financial Crisis. A number between 100 and 120 is a safe bet. Platinum likely is the most numerous of the variants, but total production of any variant numbers only a few dozen, and white gold likely amounts to single digits.

Because each 5002 was available solely upon application and approval, the production process was bespoke. Unique pieces exist. A handful may have been assembled even after the 2013 arrival of the replacement reference 6002.

The search for a Patek Philippe 5002 starts with money and ends with passion. Stocks, real estate, and certain classes of bond make more sense from an investment standpoint. But if you really prefer those to a Sky Moon, you wouldn’t have read this far. Patek’s 5002 is a watch that inspires even the most cold-hearted realists to see stars.

*Tim Mosso is media director and watch specialist at Watchbox.

You may also enjoy

Behind The Lens: The Ultra-Rare Patek Philippe Reference 5070J-013