Training The Next Generation Of A. Lange & Söhne Watchmakers: 25 Years And Counting

During the 175th anniversary of the birth of watchmaking in Glashütte in 2020, in conjunction with A. Lange & Söhne the city erected a monument of Walter Lange (1924-2017).

Walter Lange’s vision of reestablishing a future perspective for the local workforce after the fall of the Berlin Wall had become reality: by training young talent in-house at A. Lange & Söhne, he also set the course for the craft’s future in the region from 1997 onward, simultaneously securing the next generation of skilled workers. 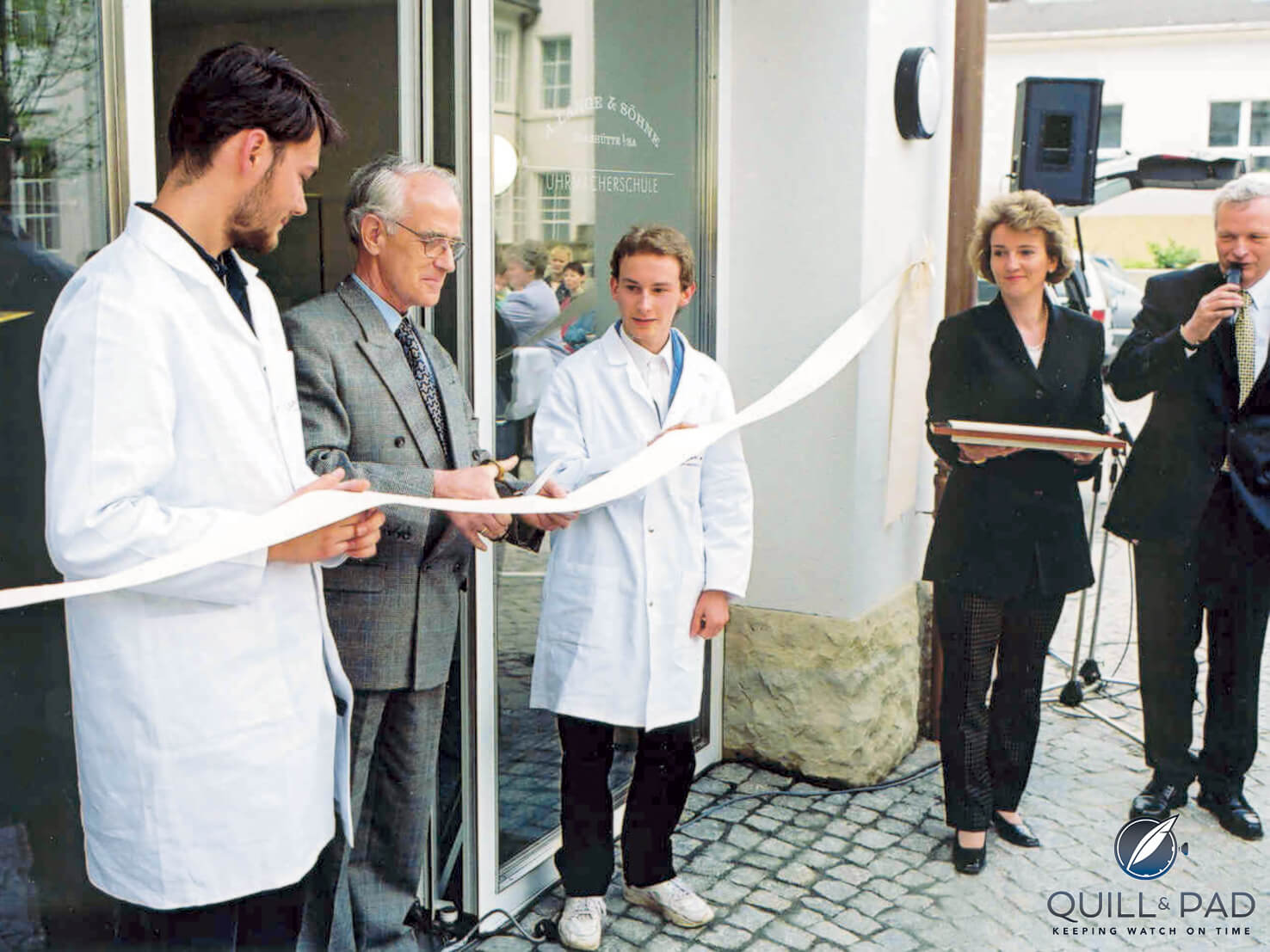 Walter Lange opening the A. Lange & Söhne watchmaking school in 1997 flanked by the first two apprentices (note: that is current Nomos head of R&D Mirko Heyne at left!)

The philanthrope Albert Schweitzer once said, “The good a person brings to the world will not be lost.” This certainly would also be true if he had said, “The good a person brings to a company will not be lost.” Early after the reestablishment of Walter Lange’s forefathers’ company, once Germany’s most famous watch manufacture, he recognized that training the next generation of watchmakers would be crucial for both the long-term prosperity of his company and the local watchmaking industry and population. 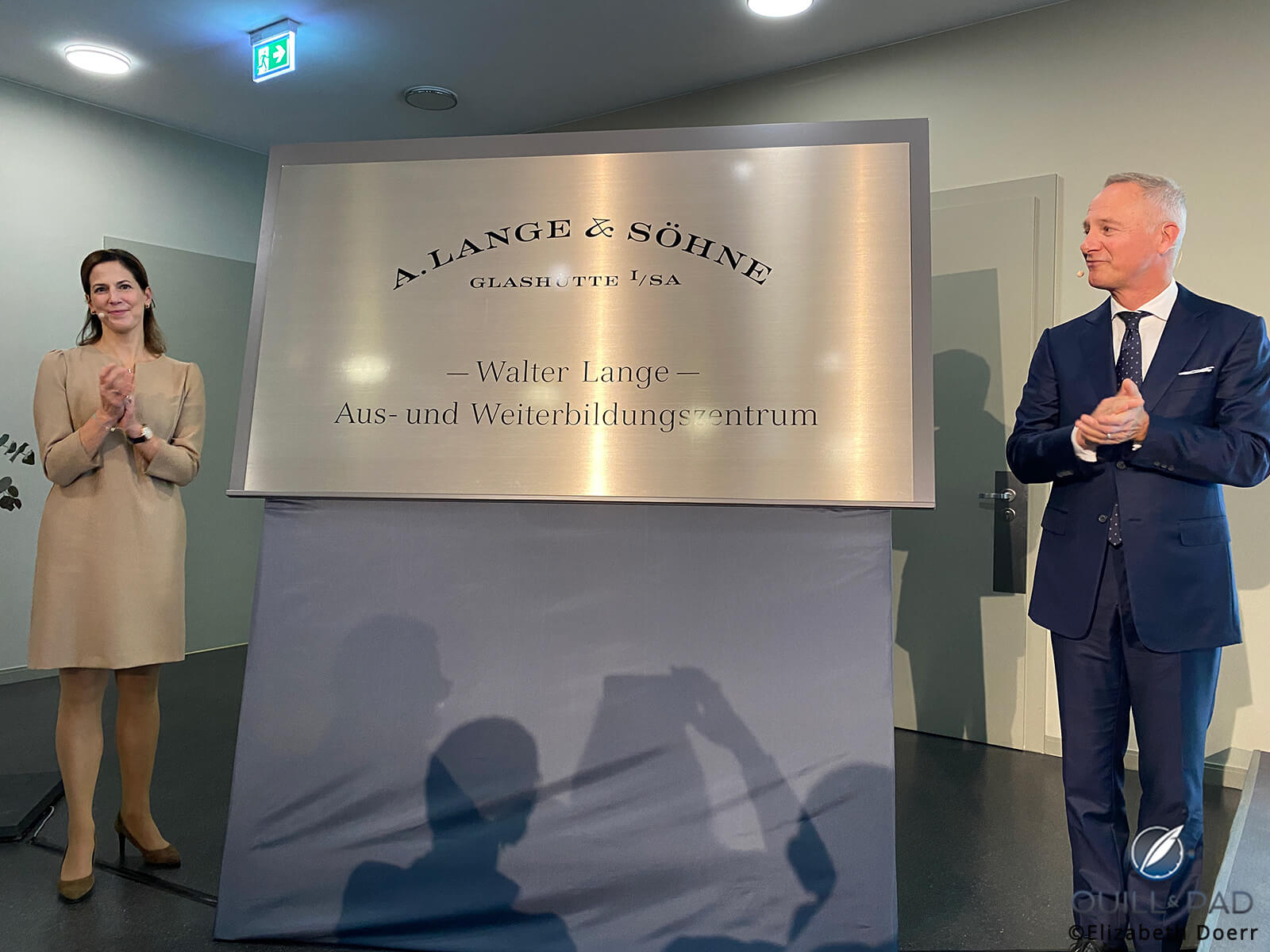 Consequently, A. Lange & Söhne began training apprentices again as early as 1997 – only three years after the appearance of its first modern wristwatches – initially with two apprentices (one of whom was Mirko Heyne, now head of R&D at Nomos Glashütte). Thanks to substantial investments over the past 25 years and a highly dedicated staff, this undertaking has evolved into an internationally acclaimed center of excellence for fine watchmaking.

Its results are impressive: over a quarter of a century, 228 apprentices have graduated as watchmakers from A. Lange & Söhne’s program and three of them have been named “Germany’s best watchmaking students” by the Chamber of Industry and Commerce. This is a remarkable number considering that skilled watchmakers have been in high demand since the renaissance of the mechanical watch in the late 1980s. 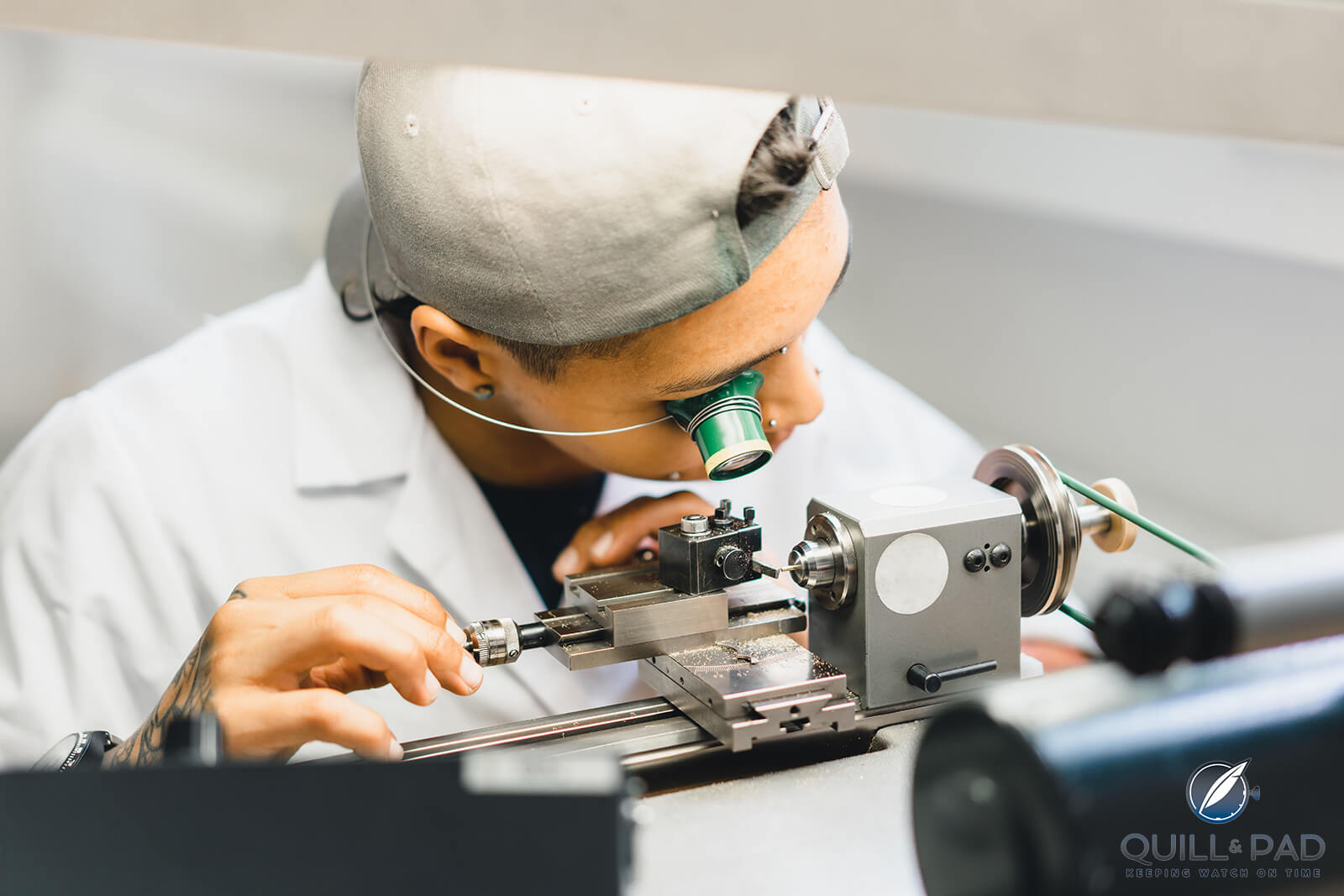 An A. Lange & Söhne apprentice turning an arbor at the Walter Lange Training and Further Education Center

Since then, the public’s fascination for complex and sophisticated handmade timepieces has continued to grow. Consequently, the profession of watchmaker has also been brought back into the spotlight. This craft, which like no other brings together tradition and superior mechanical skills, is one of the oldest in history. Yet it is highly contemporary because it generates a product that is synonymous with sustainability and added value. The small amount of energy that a mechanical movement needs to fulfill its job is either automatically generated by movement of the wrist or by the manual tensioning of the mainspring via the crown.

The mechanism is like a sailboat that travels solely by the force of the wind. Therefore, the aspect of sustainability makes the profession attractive for some young people with a renewed interest in mechanics. “The certificate of proficiency represents the best of ‘Made in Germany,’ which includes the quality of the education, technical know-how, and hands-on experience,” says A. Lange & Söhne CEO Wilhelm Schmid. 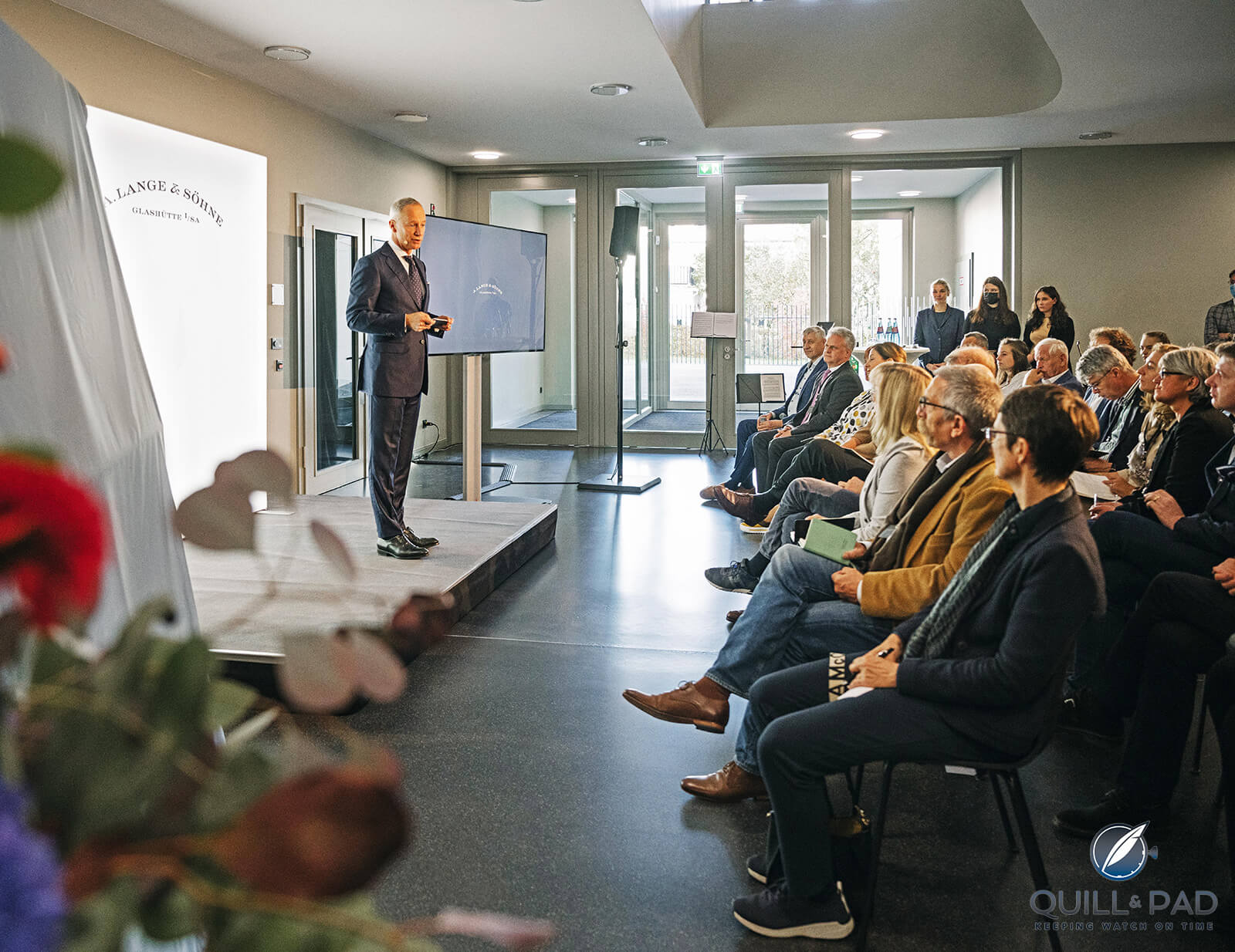 A. Lange & Söhne CEO Wilhelm Schmid addressing the press and other visitors in celebration of the Walter Lange Training and Further Education Center

The production of mechanical wristwatches still remains based on the same skills used hundreds of years ago when there were no machines, electric light, running water, or technical literature: exceptional craftsmanship, dedication to detail, a high level of technical understanding, and an ability to focus. Not many young people are cut out for the work within this minute universe of precision mechanics, where a magnifying glass and a pair of tweezers are the most important tools. For this reason, the profession is to this day more than a profession for most: it is a calling. 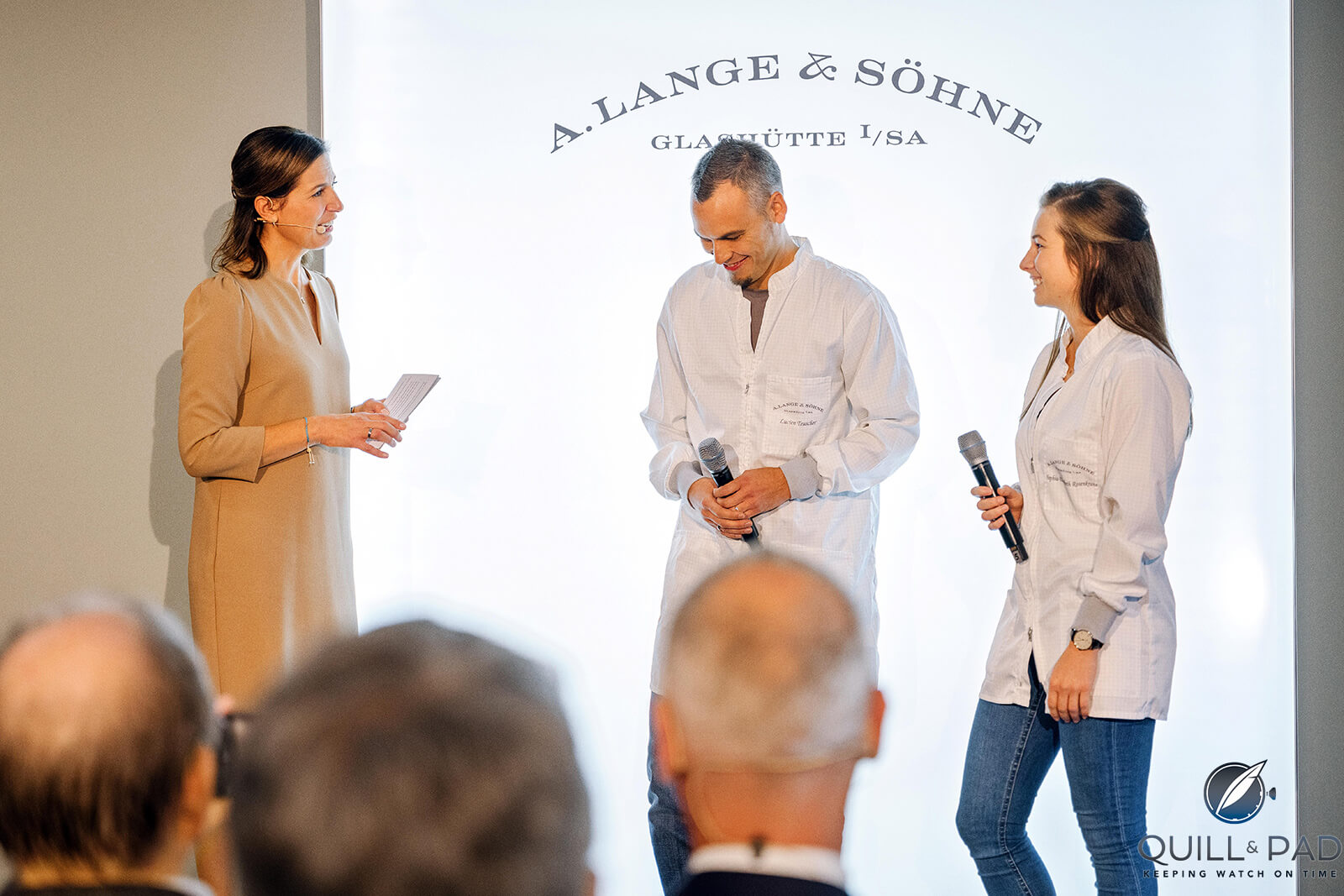 A. Lange & Söhne HR director Christine Land-Spreitzer talks with watchmakers Elias and Neele at the celebration of the Walter Lange Training and Further Education Center

“I had a hard time focusing at first because we’re working right in front of our noses,” says Elias, who graduated from the A. Lange & Söhne training in July 2022. However, with time came the practice and the ability to focus over a long period, the 21-year-old, self-proclaimed perfectionist says. “All efforts pay off when you see the finished watch that performs the way it’s supposed to and looks cool.”

Like all A. Lange & Söhne apprentices, Elias underwent a three-year dual training program introducing him to the fundamentals of the profession. From construction to assembly and repair, the apprentices are taught the skills required to make all kinds of components – including tools – and gain insight into every step it takes to produce a timepiece by A. Lange & Söhne. 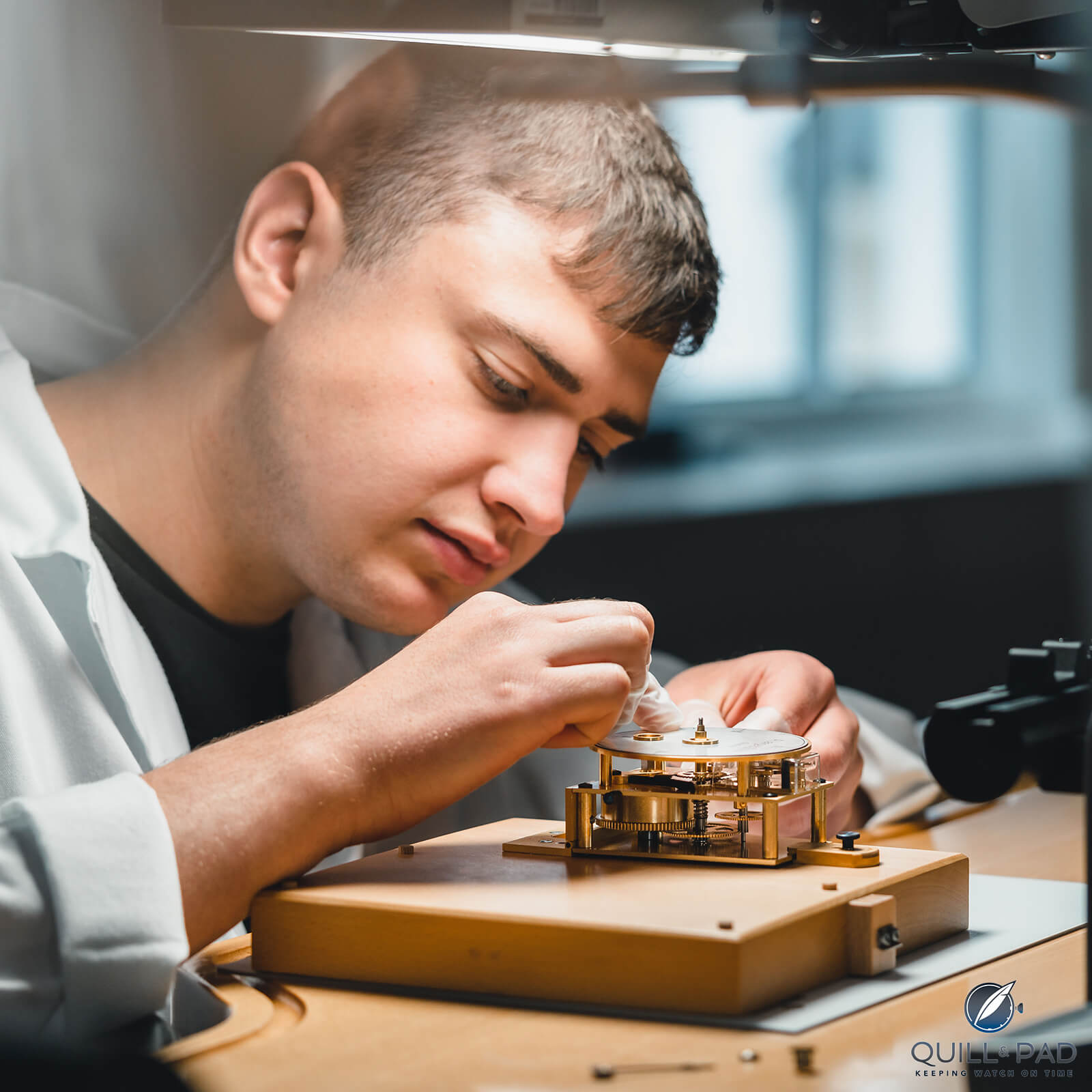 An A. Lange & Söhne apprentice working on a clock at the Walter Lange Training and Further Education Center

In addition, the apprentices are instructed in the workings of clocks, quartz watches, pocket watches, and alarm devices. This also includes the brand’s haute horlogerie-quality finishing and decorating techniques, which are highly appreciated by watch lovers and collectors. When asked what they particularly enjoyed during their training, the apprentices unanimously mention their “own project,” which is making or repairing a wristwatch themselves or overhauling a vintage clock.

For A. Lange & Söhne, the emphasis is not only on excellent vocational training, but also on developing the individual strengths of the students. “When it comes to training the next generation of Lange watchmakers, we place great importance on providing them with comprehensive guidance. Our in-house training center with state-of-the-art workbenches, the support of a qualified team of instructors, and regular internships at the manufacturing plant guarantee the highest level of specialist education,” says HR director Christine Land-Spreitzer. Activities such as field trips and sports activities foster team spirit. 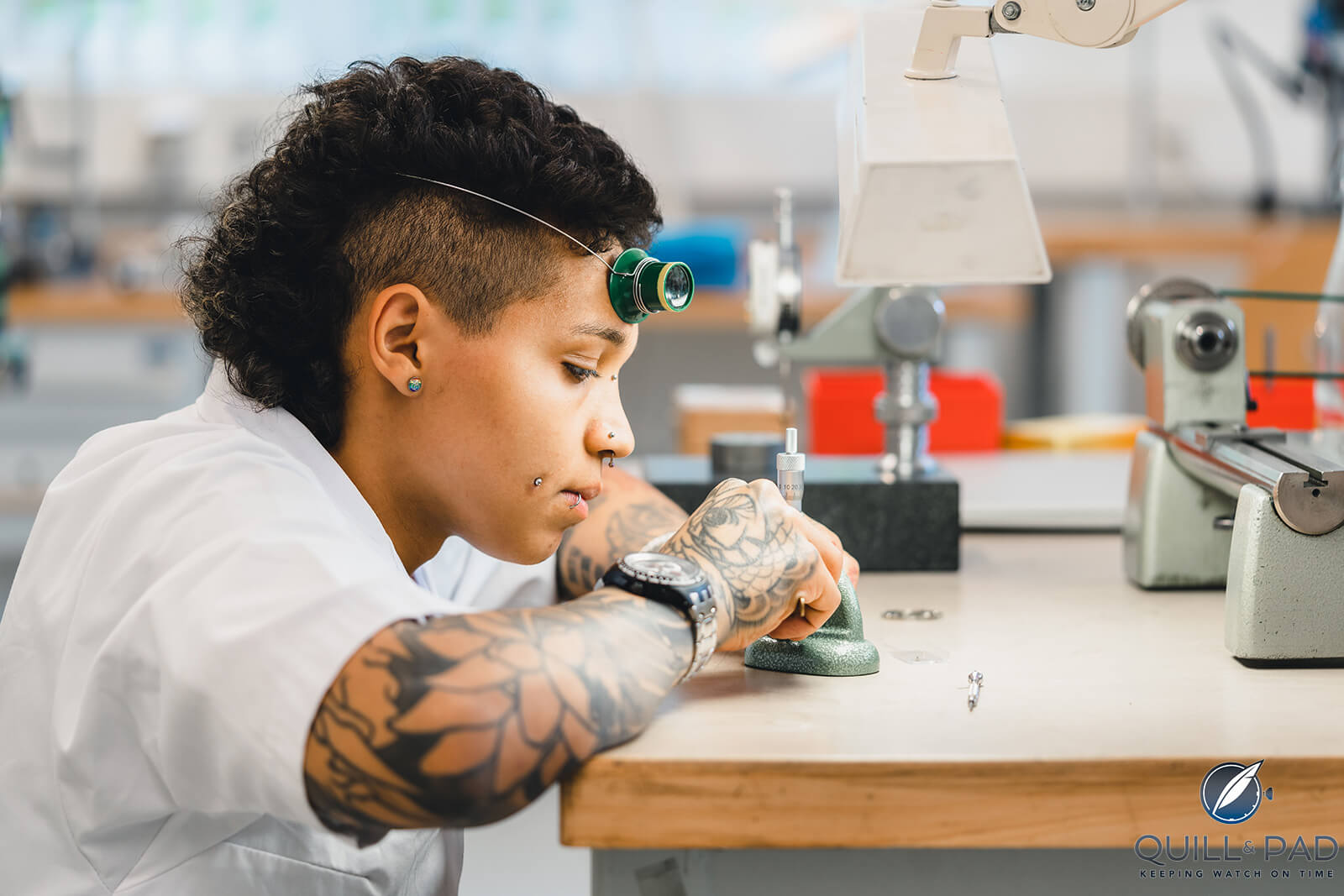 An A. Lange & Söhne apprentice at the Walter Lange Training and Further Education Center

Team spirit and a sense of community had already been a priority for the company’s historic founder, Ferdinand Adolph Lange, who taught watchmaking to the first 15 watchmaking apprentices in Glashütte almost 180 years ago. After his years of traveling abroad, which included internships with famous watch and chronometer makers, he founded the first manufacturing workshop in the remote and then-impoverished town nestled into the Eastern Ore Mountains on December 7, 1845, with the ambitious aim of “building the best watches in the world.”

Training new blood was also close to Walter Lange’s heart, who passed away in January 2017. After German reunification, this great-grandson of founder Ferdinand Adolph Lange brought his family’s legacy back to life – and with it the art of fine watchmaking in Germany. He and business partner Günter Blümlein managed to resurrect the legend of this historic long-established brand after a more than 40-year enforced hiatus by the socialist state system and the centrally planned economy of East Germany that had ended the sophisticated traditions of the old days and introduced cheap mass production.

Thanks to Walter Lange’s vision of mechanical watches of the highest quality once again being produced in Glashütte, other manufacturers were encouraged to relocate there too, so that the town once again became a center of fine watchmaking. For his outstanding services to the Saxon watch industry, Walter Lange was awarded honorary citizenship of the town of Glashütte, the Saxon Order of Merit, and the Federal Cross of Merit. 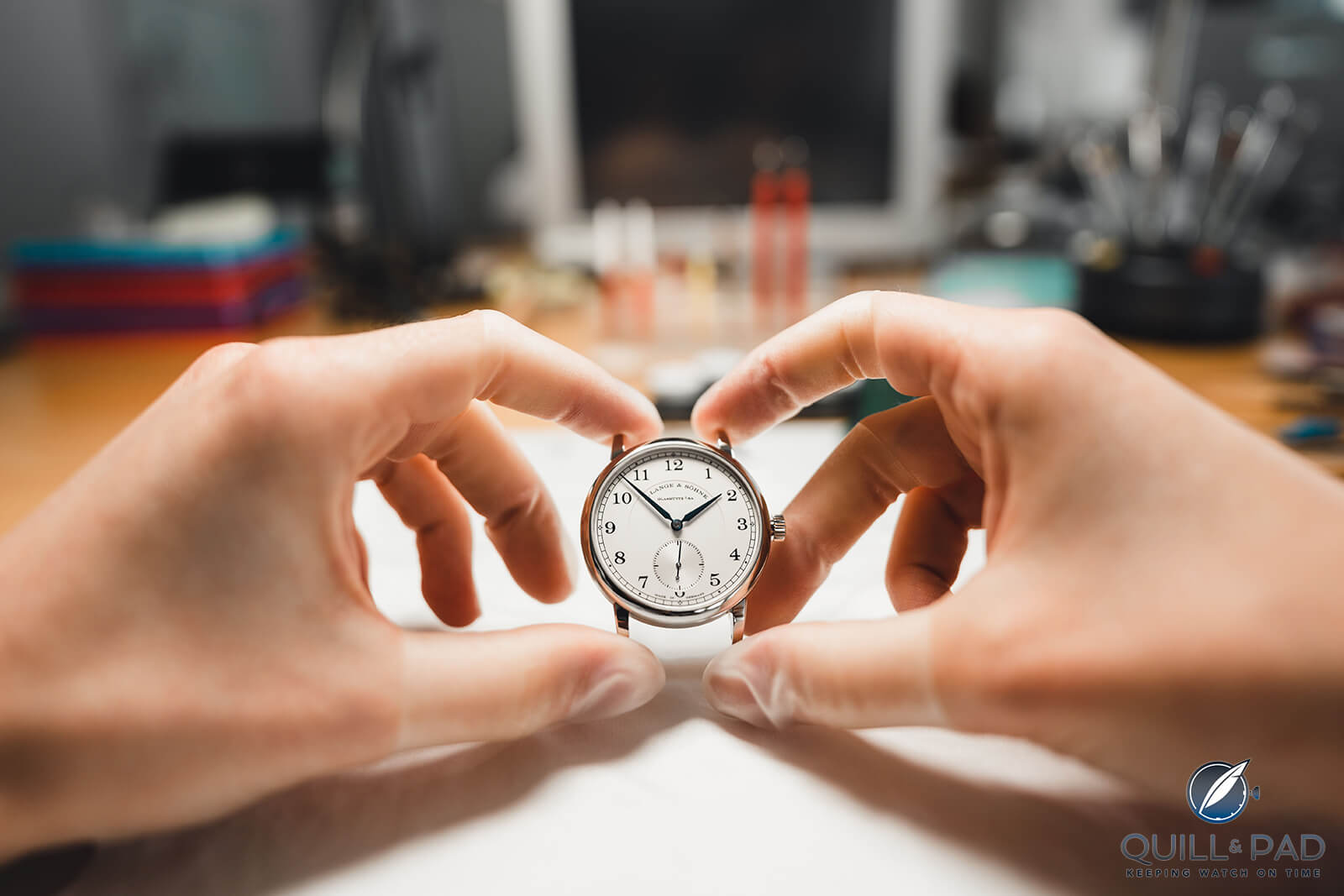 A retired watchmaker at the time in his late sixties, Walter Lange was an example and role model for the apprentices. He inspired them with his decades-long expertise and passion for the profession as well as his warmhearted personality. The grandseigneur once phrased his personal advice to them as follows, “Try to make the most of your talents and never stop in your efforts to improve things.” This, he said, was the principle that had always guided him. As an ambassador for the company in his later years, he was closely attached to A. Lange & Söhne and the educational institution for many years after he left management.

In his self-perception, he was “the bridge to the past.” He was firmly convinced that the young watchmaking talents would build a bridge into the future. Therefore, he actively engaged with them, sometimes even outside the workshop. When he met with them, he always had his school watch with him, which he had made as a student in 1946. His last official activity for the company was a pre-Christmas get-together with the apprentices and teachers in December 2016. He enjoyed gathering at a very traditional “coffee” with Stollen and cookies.

By renaming the training center the Walter Lange Aus- und Weiterbildungszentrum, A. Lange & Söhne honored Walter Lange’s commitment to the next generation as well as the future of craftsmanship in the region, where today other companies such as Glashütte Original and Wempe Glashütte i/SA also train apprentices. 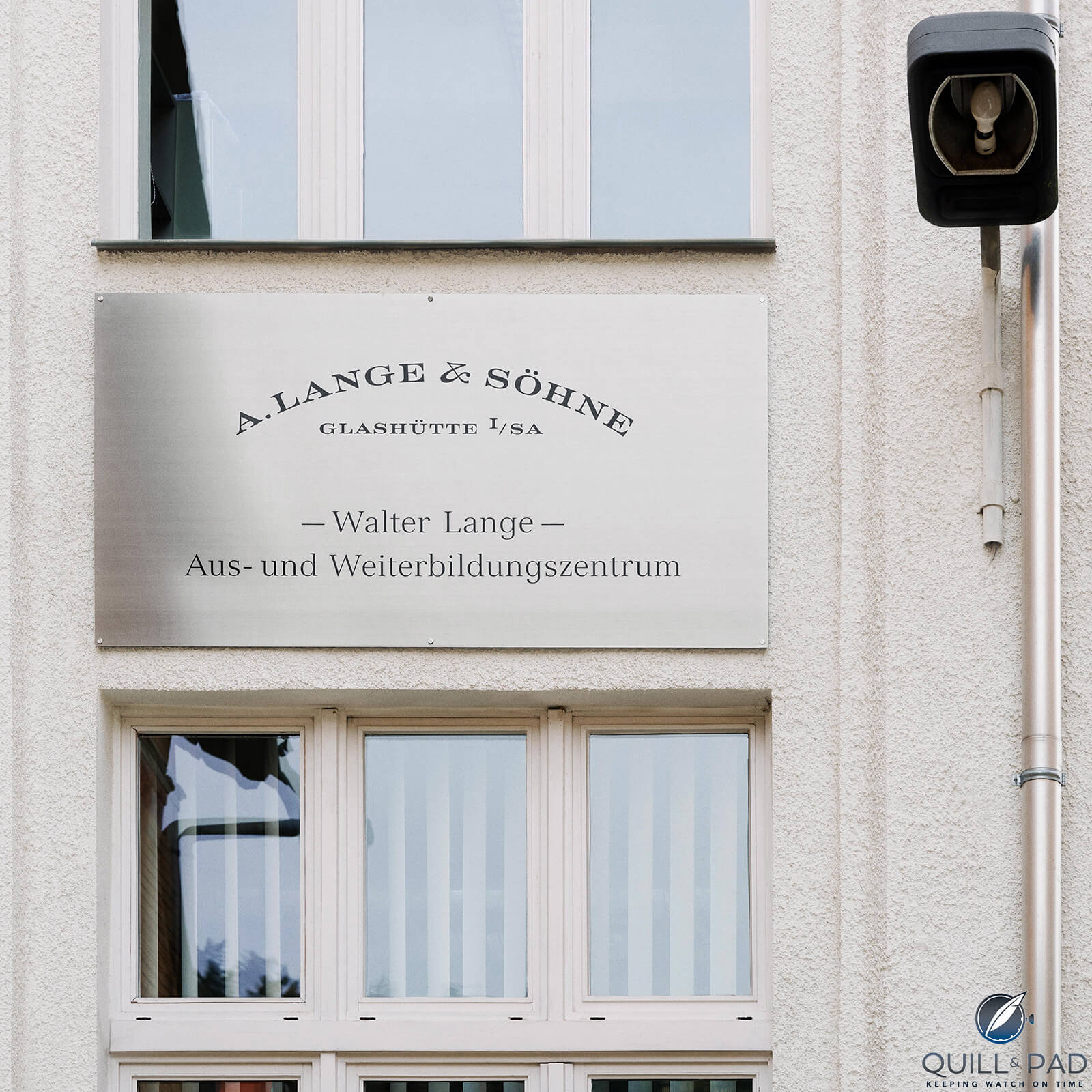 “Walter Lange continues to shape the culture of our company to this day,” explained A. Lange & Söhne CEO Wilhelm Schmid during a dedicated ceremony at the manufacture in October 2022. “We are now honoring his outstanding and exemplary commitment by renaming our watchmaking school Walter Lange Training and Further Education Center. In doing so, we want to keep the memory of this great Glashütte man and his vision alive.”

The fact that A. Lange & Söhne is once again the largest employer in Glashütte today confirms that this vision has become reality. The in-house-trained skilled workers play a major part in this success story.

175 Years Of Watchmaking In Glashütte: A History Of Fine German Watchmaking

Walter Lange Memorial In Glashütte: A Moving Tribute To 175 Years Of Glashütte Watchmaking And 92 Years Of A Life Well Lived

The Life And Times Of A. Lange & Söhne Re-Founder Walter Lange