Ulysse Nardin Freak S: Taking Freaky Back Toward Its Roots

Legacy is a strange concept because no matter what we do, we don’t have final control over what it becomes in the future. We can do our best to create things that leave a lasting impression or work to build relationships that make those around us remember us in positive ways. But outside influences like bad luck, bad timing, ignorance, dishonest acquaintances, or even unavoidable mistakes can interfere with what we hope to accomplish.

Thomas Midgley Jr. belonged to the third generation of inventors in his family and was on an upward trajectory by his late twenties. It seemed he would have a positive impact on the Midgley legacy as a graduate of Cornell working for General Motors, but history has been less than kind to his memory. Midgley is the man that discovered leaded gasoline and CFCs (chlorofluorocarbons), two inventions that have negatively impacted the earth and all life on it more than any other act by a single human to this point in history. These discoveries took place within a single decade between 1921 and 1930, and it took until 1978 to ban CFCs and 1996 to mostly ban leaded gasoline. The damage to the environment and public health was staggering and still ongoing.

Midgely didn’t live long enough to see all the fallout from his inventions, though he knew lead caused deaths and had to take a leave of absence from General Motors after contracting lead poisoning himself. But these weren’t his only inventing mistakes: having contracted polio in 1940 and becoming severely disabled, he put his engineering mind to the task and devised a complicated system of ropes and pulleys that allowed him mobility with limited aid from others. Sadly, he designed it in such a way that led to him becoming entangled in the ropes and strangling himself, a tragic end to what at the time was an award-winning and successful career.

Today we know differently: the Midgely legacy is one of good intentions, bad luck, and environmental disaster. He has been named one of the deadliest inventors of the twentieth century.

Some legacies take alternate routes to grow into great achievements: Nelson Mandela, Michael Faraday, and NASA mathematician Katherine Johnson are great examples. Their legacies have skyrocketed over the years (for obvious reasons) but weren’t always guaranteed. Mandela being the best example of this as he was imprisoned for just shy of three decades for being a revolutionary until he was released and negotiated an end to apartheid in South Africa. He was elected president and went on to become a leader for social justice.

Sometimes a legacy can be redirected so that it shifts from unknown to unstoppable. This happens in the watch industry, too, as brands shift through the years, waxing and waning in popularity or struggling, for example, to survive the quartz crisis.

One brand with a long history of successes punctuated by tough times is Ulysse Nardin, which was sold to its board of directors in early 2022 by the Kering Group, which had been its owner since 2014. The sale to Kering took place a few years after previous owner Rolf Schnyder had passed away. This is reminiscent of the founder, Ulysse Nardin, who died suddenly at the age of 53 in 1876, at which point his eponymous company passed to his son. Each of these instances created a fork that required adaptation from the company. 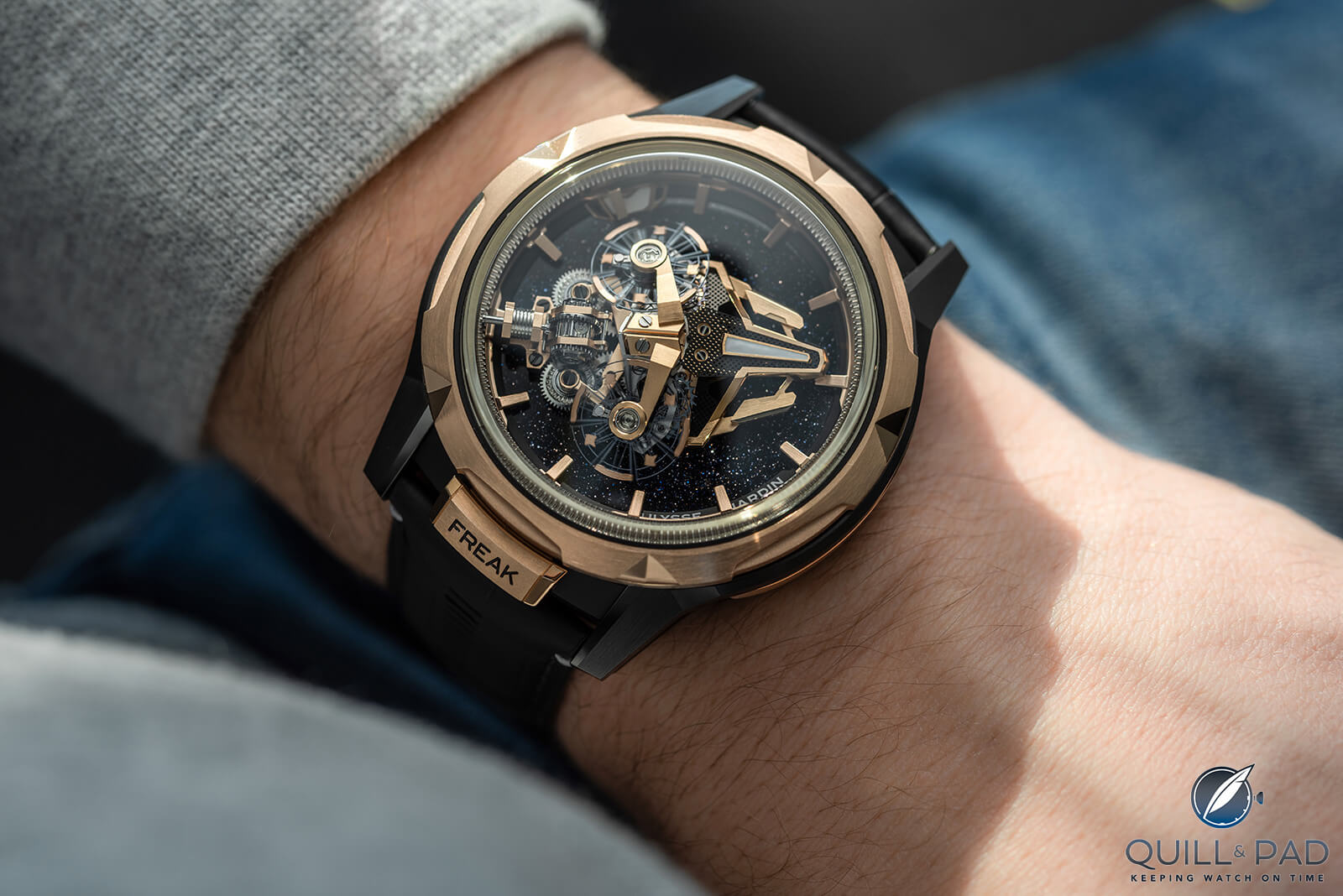 Today, as in the past, Ulysse Nardin stays committed to creating world-class timepieces. And on the heels of the sale, the brand released a new Freak – the Freak S – which reinforces its position as a leader in horological innovation and avant-garde design. And takes the brand’s legacy back toward its modern roots.

Just like the original Freak of 2001, the Freak S introduces features that are out of this world. 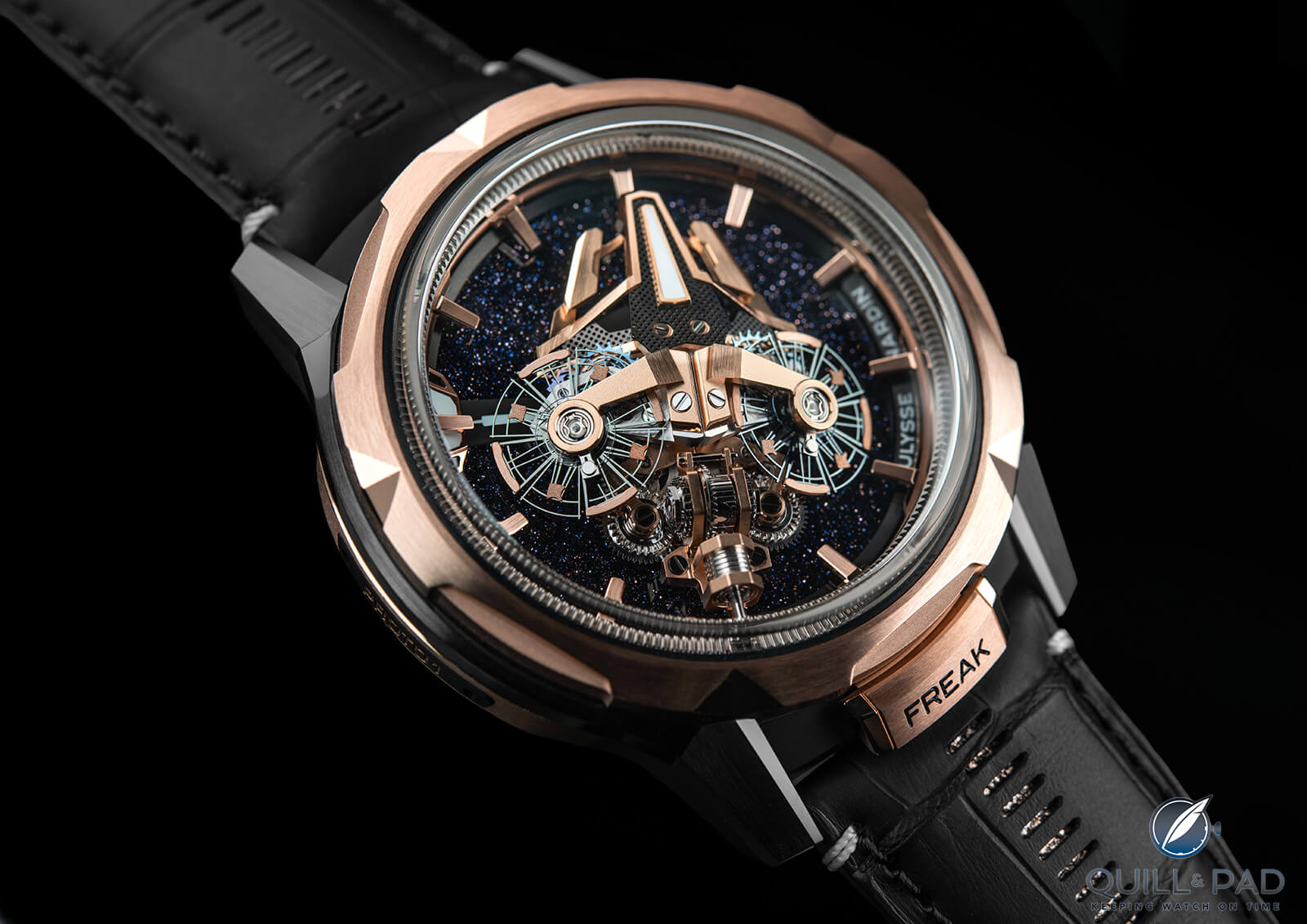 Twenty-one years after the launch of the Freak changed the watch industry forever, the Freak S reinvigorates the collection with a new aesthetic, two off-plane balances, and a very mechanically pleasing differential tying the core of the carousel movement to the hour disk (which also happens to be the mainspring barrel cover). 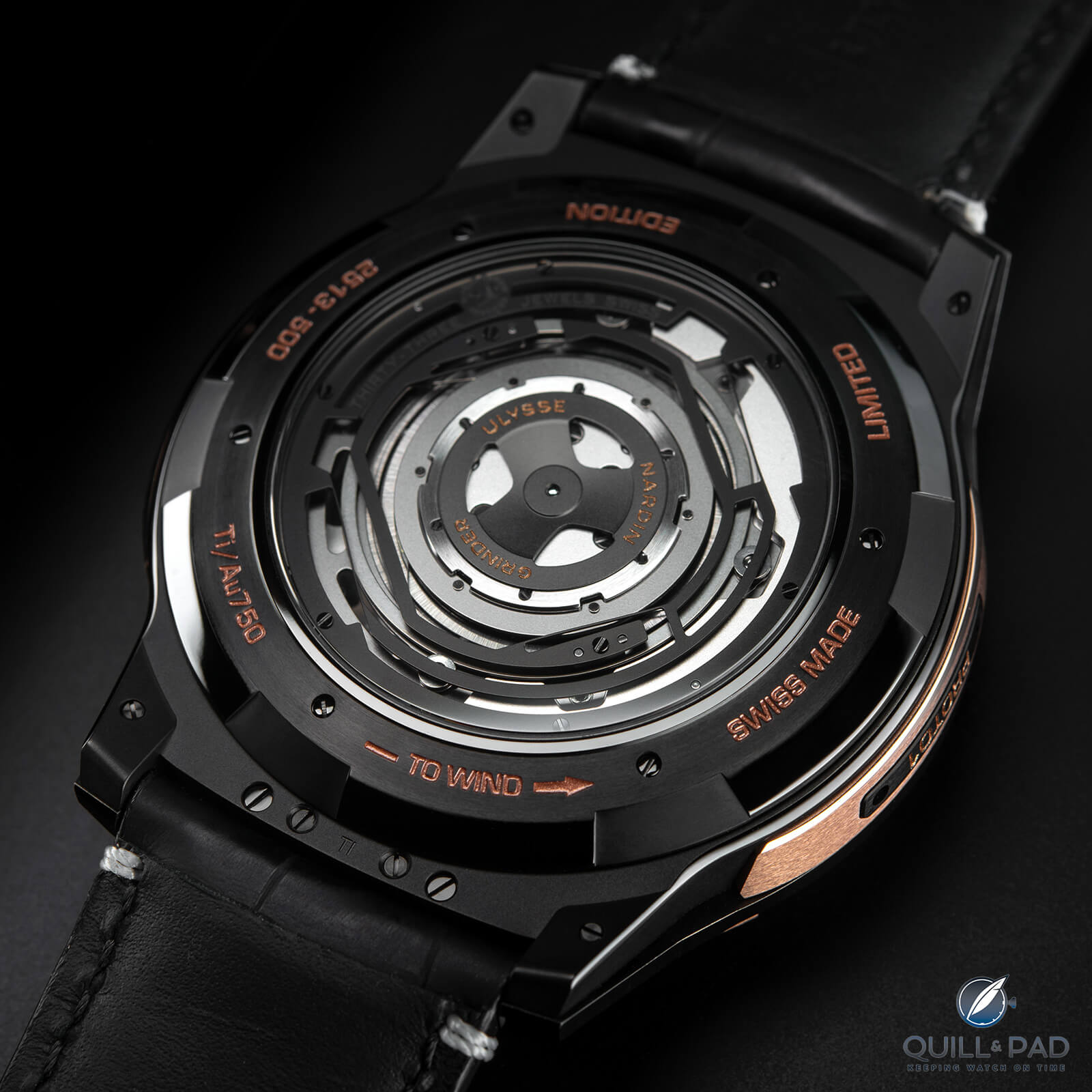 Back of the Ulysse Nardin Freak S

The core of the Freak remains the same after all this time, with the employment of a crownless case, time setting via the bezel, winding via the case back, and the majority of the going train mounted within a 60-minute carousel. The dial also maintains the sci-fi look of a spacecraft that has become synonymous with the Freak over the years, even though comparing the original to the Freak S dramatically showcases how far it has come.

The “dial” consists of the carousel, which has become the largest of all the Freak iterations due to the twin balances flanking the central axis of the assembly. The carousel carriage is complex and largely hides the going train that was previously the highlight as most of it rests underneath the balances and differential gearing. The differential has a horizontal shaft meshing with the outside and extending toward the dial edge where the usual ring gear drives the central assembly. 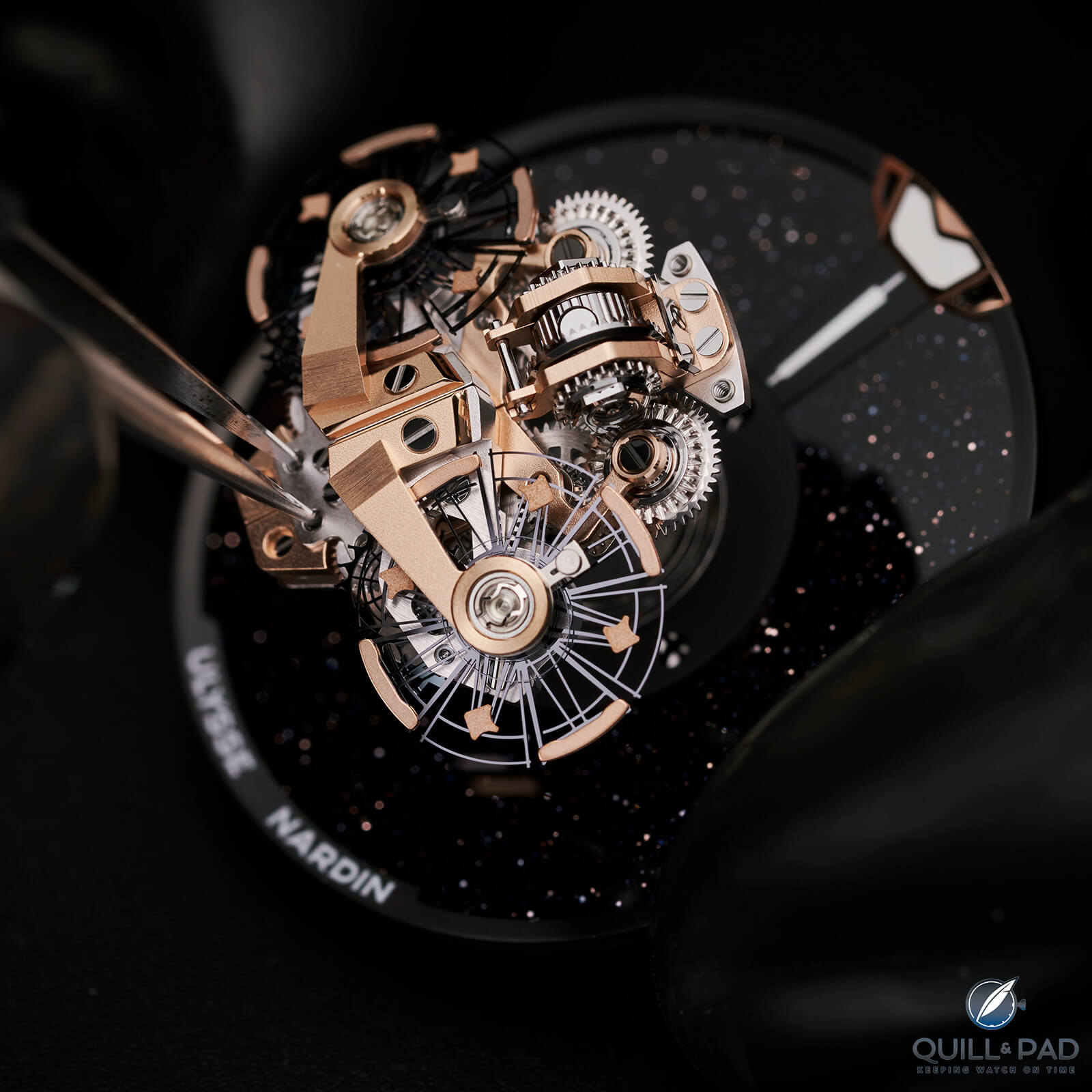 Underneath is a stunning aventurine disk riding atop the mainspring barrel that features a small, angled block sporting Super-LumiNova and a strip on the surface with more Super-LumiNova acting as the hour indicator. In the dark the block glows as it crosses beneath cantilevered hour markers. That same glow is found on the carousel, which acts as the minute hand, thanks to a long trapezoidal strip of Super-LumiNova. 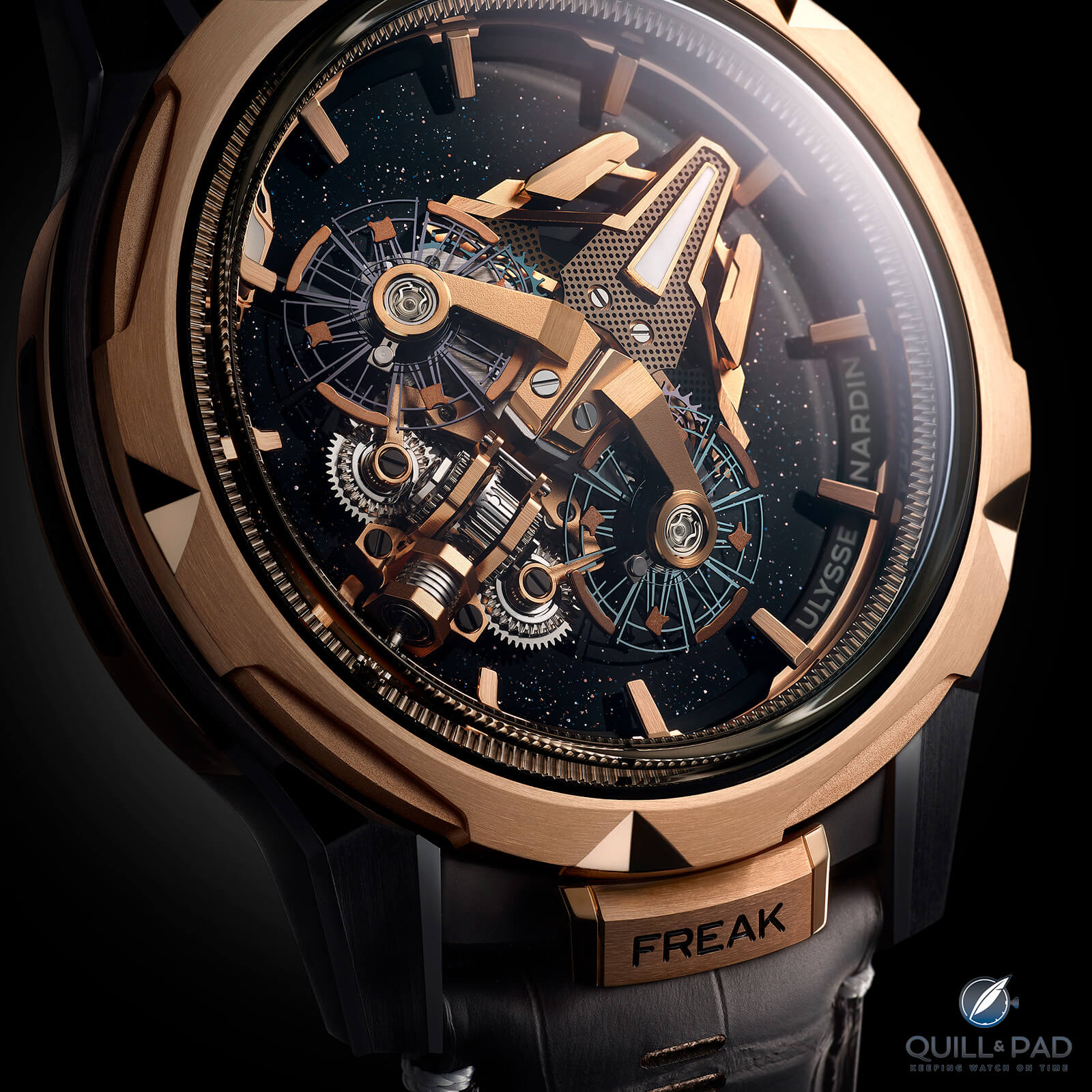 While appearing much, much more complicated than even the most complicated Freaks that have come before, it is a rather simple display of the time. Hours and minutes, nothing more, with two pointers and a set of hour markers. Everything else is for spectacle and the enjoyment of movement nerds like me. And it works!

The bezel, as stated, allows for the setting of time: one rotates it clockwise or counterclockwise after unlocking it with the lever that doubles as the name plaque for the watch. At 6 o’clock, below the bezel in between the lugs, is the Freak plaque, as seen on some earlier models, but those worked a bit differently. Earlier models used the plaque as a push button and came with some small protrusions to the side of the plaque. This new version is cleaner while still indicating a constant throughline from the legacy of the collection.

Take a ride on the Freak spaceship

The same goes for how the Freak S is wound. While it does have the automatic winding system named Grinder – see the genesis of this winding system in Diving Deep Into The Technology Of The Ulysse Nardin InnoVision 2 – the case back bezel is still the main manual method to wind the mainspring (just like the original). In most ways the Freak S is the clear descendent of the original Freak, but the departure of the mechanics of the carousel makes it obvious just how far Ulysse Nardin has come. 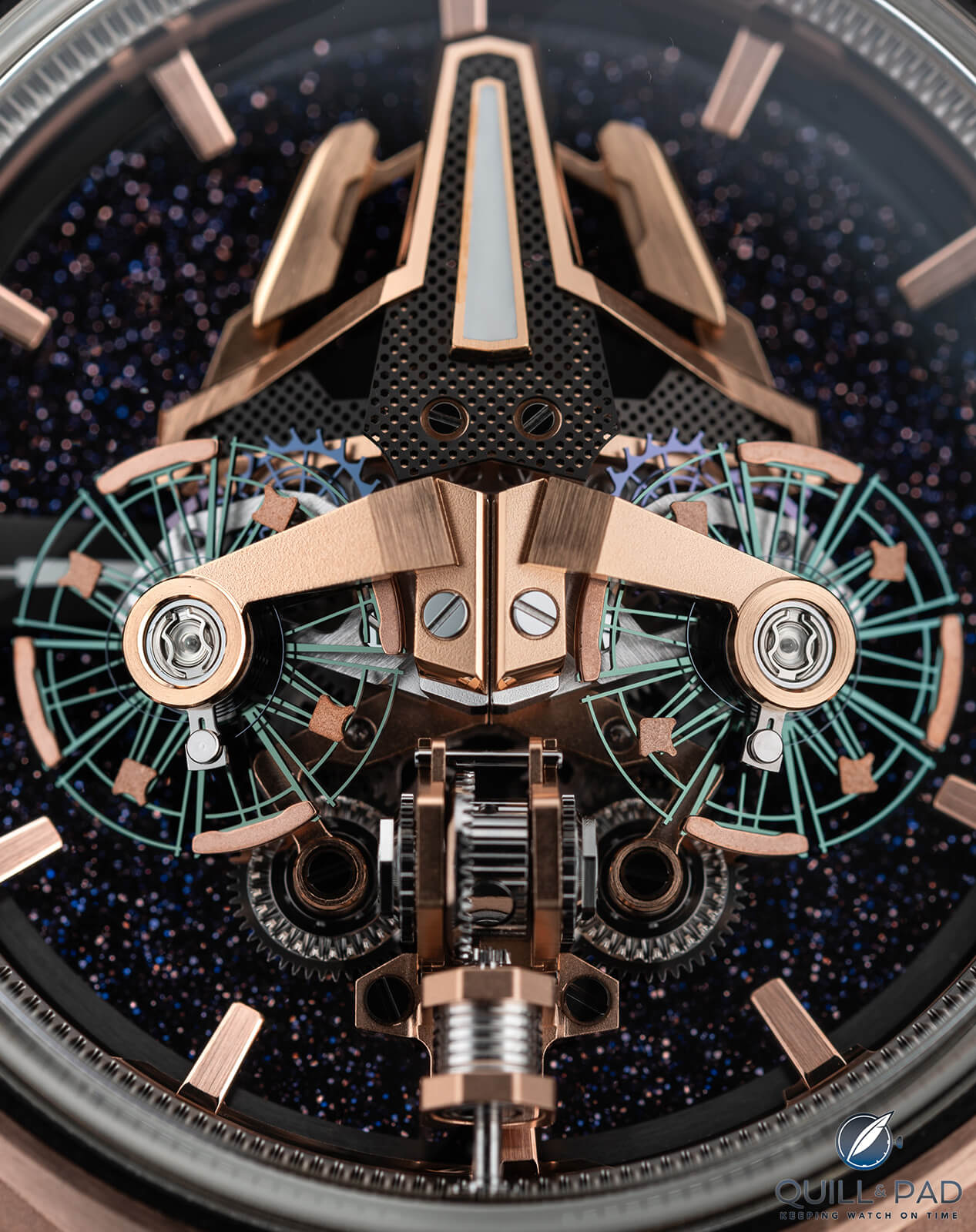 The twin free-sprung balance wheels are made of silicon and feature adjustable gold weights for poising and adjustment as well as a silicon hairspring. It has a DiamondSIL escapement (synthetic diamond-coated silicon) for ultra-low friction and the ability to function without additional lubrication. This quasi-proprietary technology has been around for 15 years thanks to earlier Freak models and the progressive, high-tech research of Ulysse Nardin. These balance wheels are also canted off-plane to provide differing positions during operation, each angle at 20 degrees from horizontal. As Greubel Forsey and others have proven in the past, the angled balance is the optimal orientation for a wristwatch since the balance can be more easily regulated since it is unlikely to ever be in a perfectly flat or perfectly vertical (the two timing error extremes) orientation, so positional errors are reduced. Combine that idea with two balances and a differential to average out those errors and you get a fairly consistent and stable rate for the timekeeping. It also doesn’t hurt that the entire assembly makes one full rotation every 60 minutes as a minute hand, adding another small averaging effect, however minor. But the Freak S, like all Freak models, is first and foremost about the carousel movement (now synonymous with tourbillon, though technically different) and now the assembly has once again been shaped to seem like a spacecraft cruising through the cosmos. 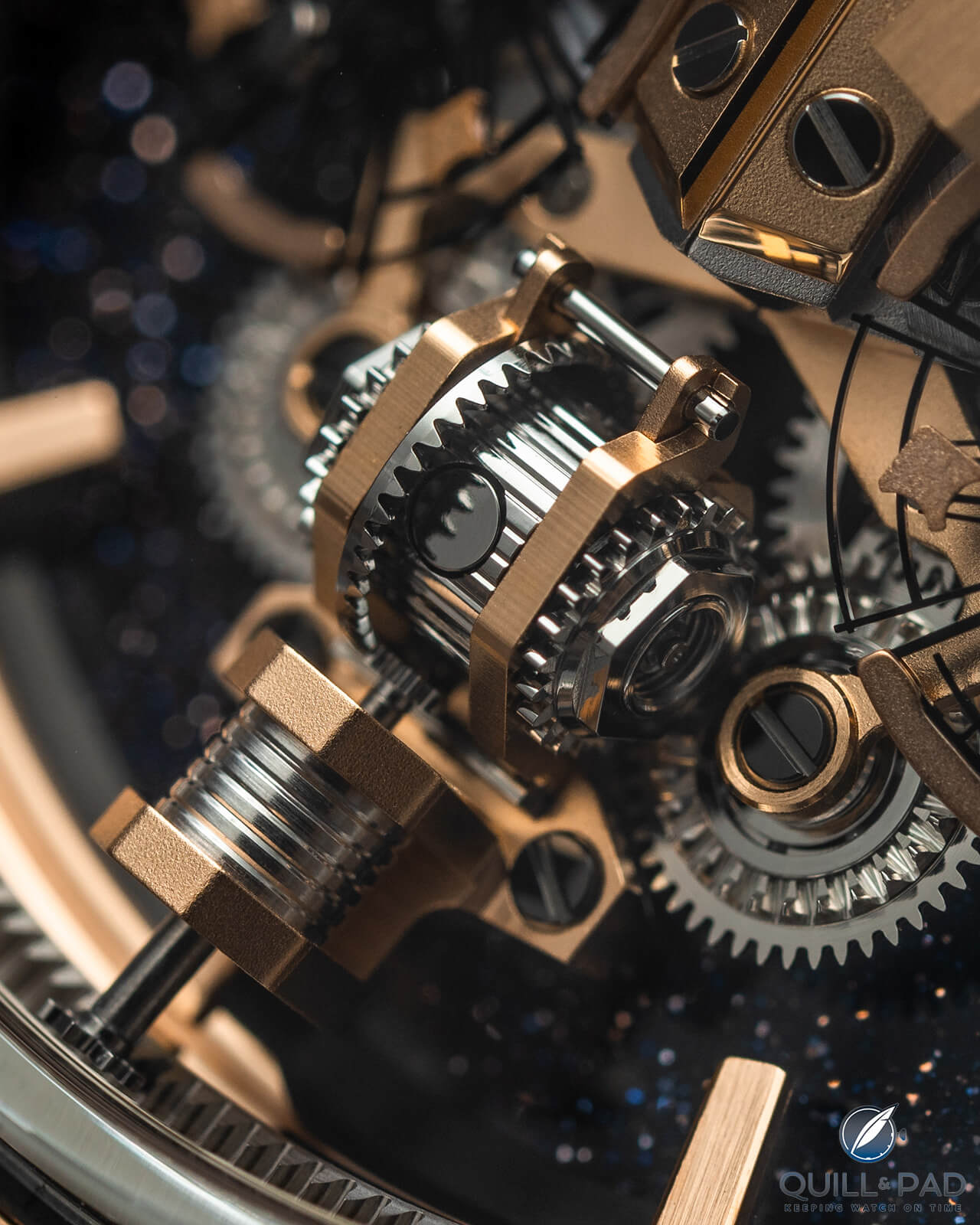 The horizontal differential of the Ulysse Nardin Freak S

The balance wheels act like wings of some sort, and the differential, sporting a horizontal gear shaft, is the ion drive pushing the craft forward. That assembly bolts onto the rest of the carousel, which has a rather sci-fi shape, to create something that could be digitally dropped right into a scene in a movie with almost no modifications. What really sells this comparison is the black aventurine dial/decorative movement plate underneath that looks like the night sky and fits perfectly here. 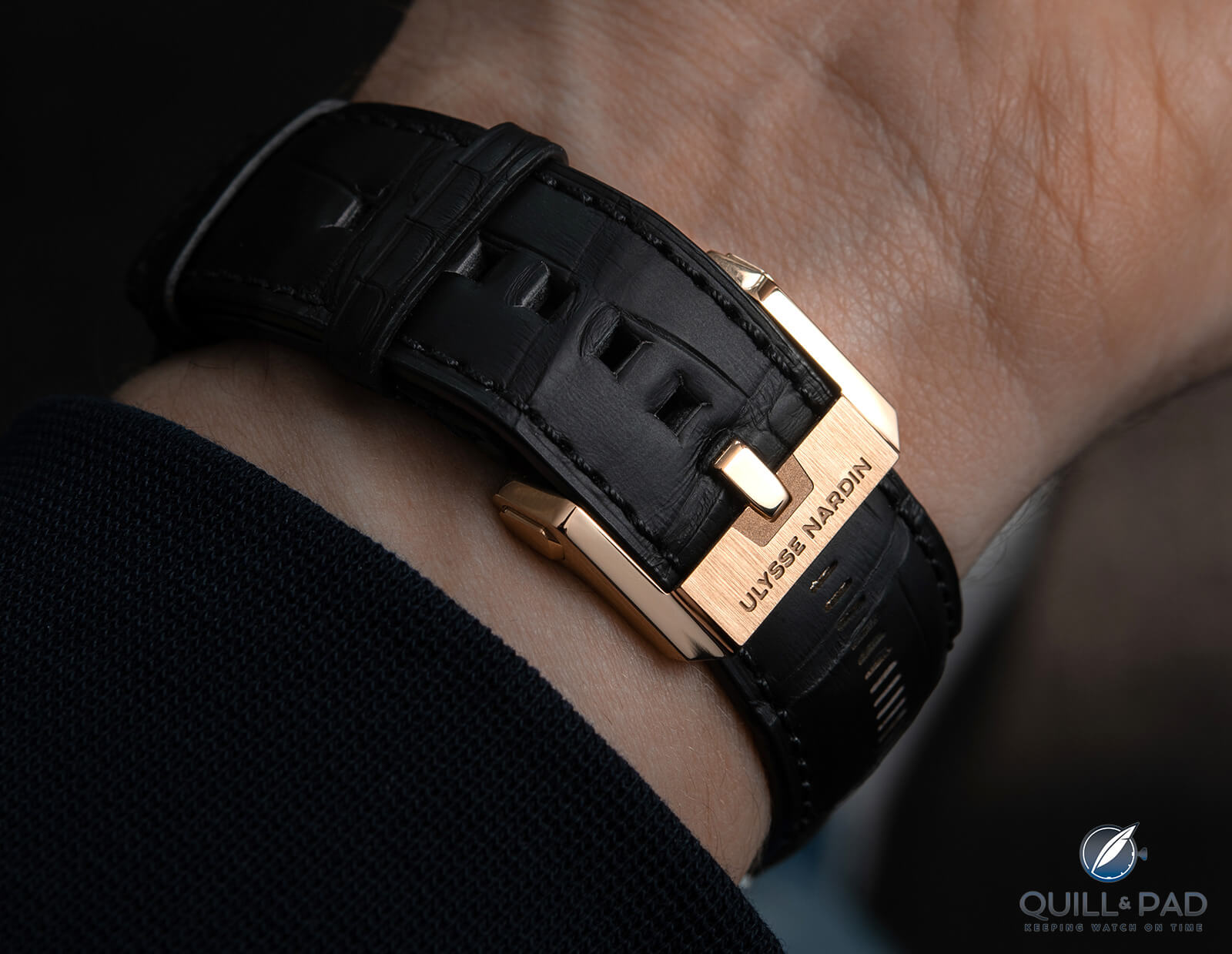 I’ve loved every Freak carousel, but this one hits new heights of awesomeness, proving that Ulysse Nardin is not running out of ideas or designs any time soon. The case design has been updated, and it even comes with a newly engineered clasp system nicknamed SYNC featuring a triple folding mechanism that opens with one click, each folding action synchronized. After a few years with the more affordable Freak X getting a lot of the spotlight, the Freak S brings the focus back to the innovation and creativity on the upper end of Ulysse Nardin’s capabilities.

As the company revitalizes after its sale to management, there is an opportunity to shake off some dust and push into new-old territory. The Freak S shows that Ulysse Nardin has no intention of standing still, and it demonstrates that after 21 years the Freak is still on the cutting edge of watchmaking design and technology.

While I sit and imagine riding on the Freak S spaceship into the unknown, let’s break this down!

Chess Moves: What The January 2022 Sale Of Ulysse Nardin And Girard-Perregaux Have To Do With Brioni

Diving Deep Into The Technology Of The Ulysse Nardin InnoVision 2