Start wearing purple for me now

All your sanity and wits, they will all vanish,

I promise, it’s just a matter of time!

Purple has been my favorite color for years, but I don’t know when that started. I know that I’ve always enjoyed colorful things all my life, and I eventually learned that purple was often the color reserved for royalty due to the expense of dyeing cloth purple. But learning that factoid didn’t change my color preferences as my favorite color used to be either blue or green, depending on the day.

Eventually, however, when asked or thinking about the question I always answered that my favorite color was purple. Being a fairly normal human being, I didn’t think too hard about why, I just knew I preferred purple. It was only today when sitting down to write about an awesome (and purple) watch that it clicked.

My very first idea about how to start the introduction was to sing the lyrics to the Gogol Bordello song Start Wearing Purple from their 1999 debut album Voi-La Intruder. Since my college days in the mid-2000’s I have listened to the gypsy punk band thanks to a hallmate who introduced me to a lot of random and awesome music. Among other songs such as American Wedding and Wanderlust King, the song Start Wearing Purple has stuck with me as one of my favorites, probably because it is one of the oldest.

It also might be the start of my love affair with the color purple; the repetition of the raucous refrain imprinted on my brain as I danced and laughed and made memories. It was as if the song told me to start wearing purple and I subconsciously obliged. I love the richness of the color purple, but the origin of that preference may have been accidentally programmed by a group of international punk rockers with Romani roots. 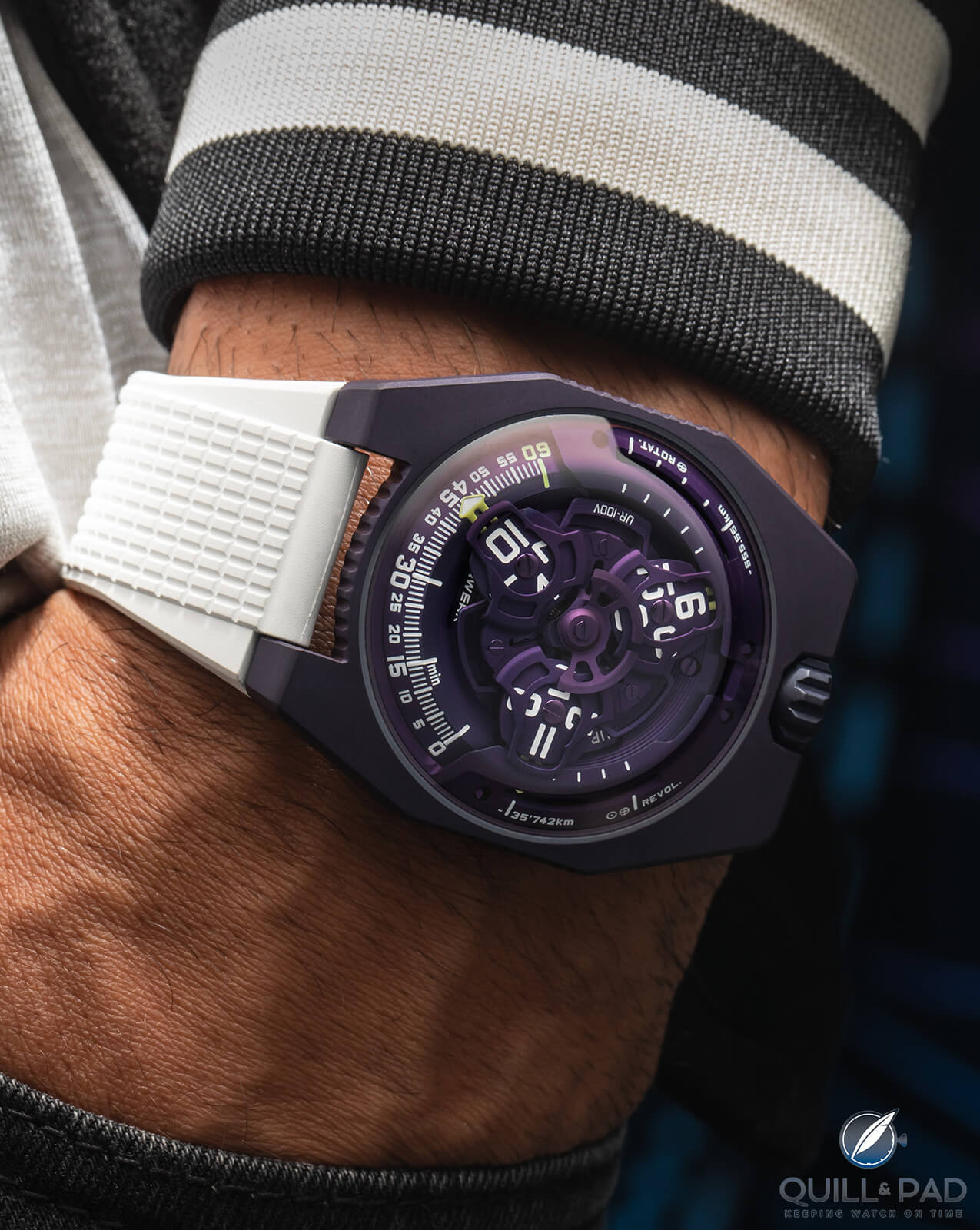 Urwerk UR-100V Ultraviolet on the wrist

So it is entirely fitting that I make that connection when writing about the Urwerk UR-100V Ultraviolet, a watch from THE astropunk brand that also formed in the late 90’s. On top of that the UR-100V Ultraviolet is an extremely purple watch, bordering on the edge of human vision (hence the name “Ultraviolet”) and both glows and shines with awesome avant-garde watch bravado that would be right at home in the underground punk scene in late 90’s New York City.

Based on the UR-100V scheme of variation on the original UR-100, this new model is the boldest version of the collection, save the early gold pieces, thanks in no small part to the rich purple contrasting with a bright white rubber strap. It immediately grabs your attention and pulls you in to see what exactly that super interesting watch is. Once up close you can appreciate the mechanical ballet beneath the domed sapphire, and if this is your first experience of an Urwerk timepiece, you may ask how to read the time. 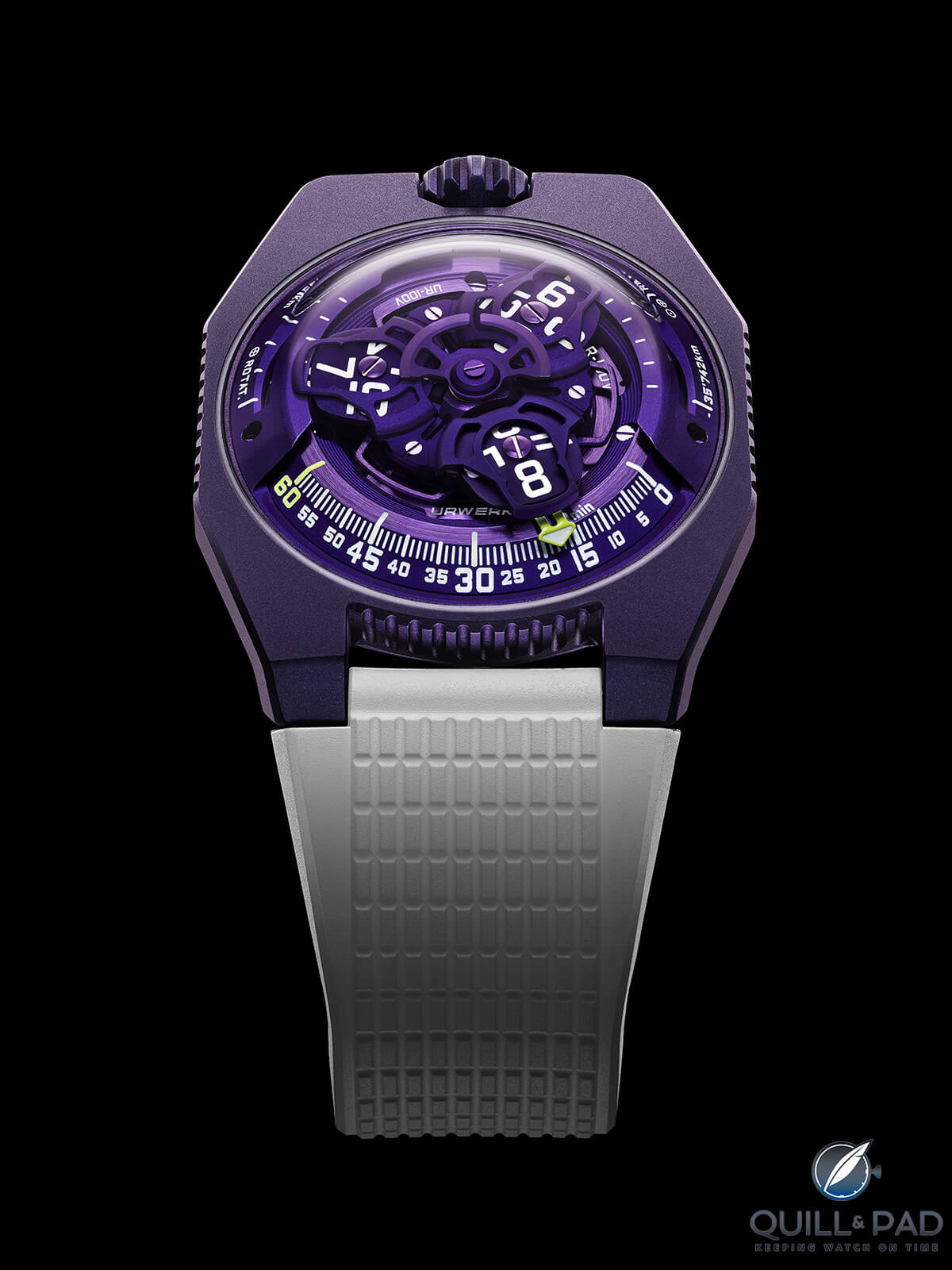 Fairly typical at this point for Urwerk, the UR-100V Ultraviolet is a satellite display using a trio of disks that make one full rotation every three hours. Each disk crosses the minute track on the bottom of the dial while the other two disappear underneath a titanium cage. Then when rotating under the cage, they display two more indications. On the left side of the watch is an opening with an indication of the distance that a person standing on the equator will travel in 20 minutes from the rotation of the earth, which is over 555 kilometers. On the right side of the dial is the second indication displaying the earth’s orbital speed in terms of distance traveled around the sun every 20 minutes, here listed at 35,742 km.

I love when a brand that is clearly THE astropunk watchmaker reminds us about our place in the cosmos, and how what we experience as time and the passing of the day is actually just a measurement of our velocity through space and how we perceive that. It’s a perfect combination with the satellite display since the three disks orbit a shared central axis and rotate around their own individual center axis, just like our earth around the sun. 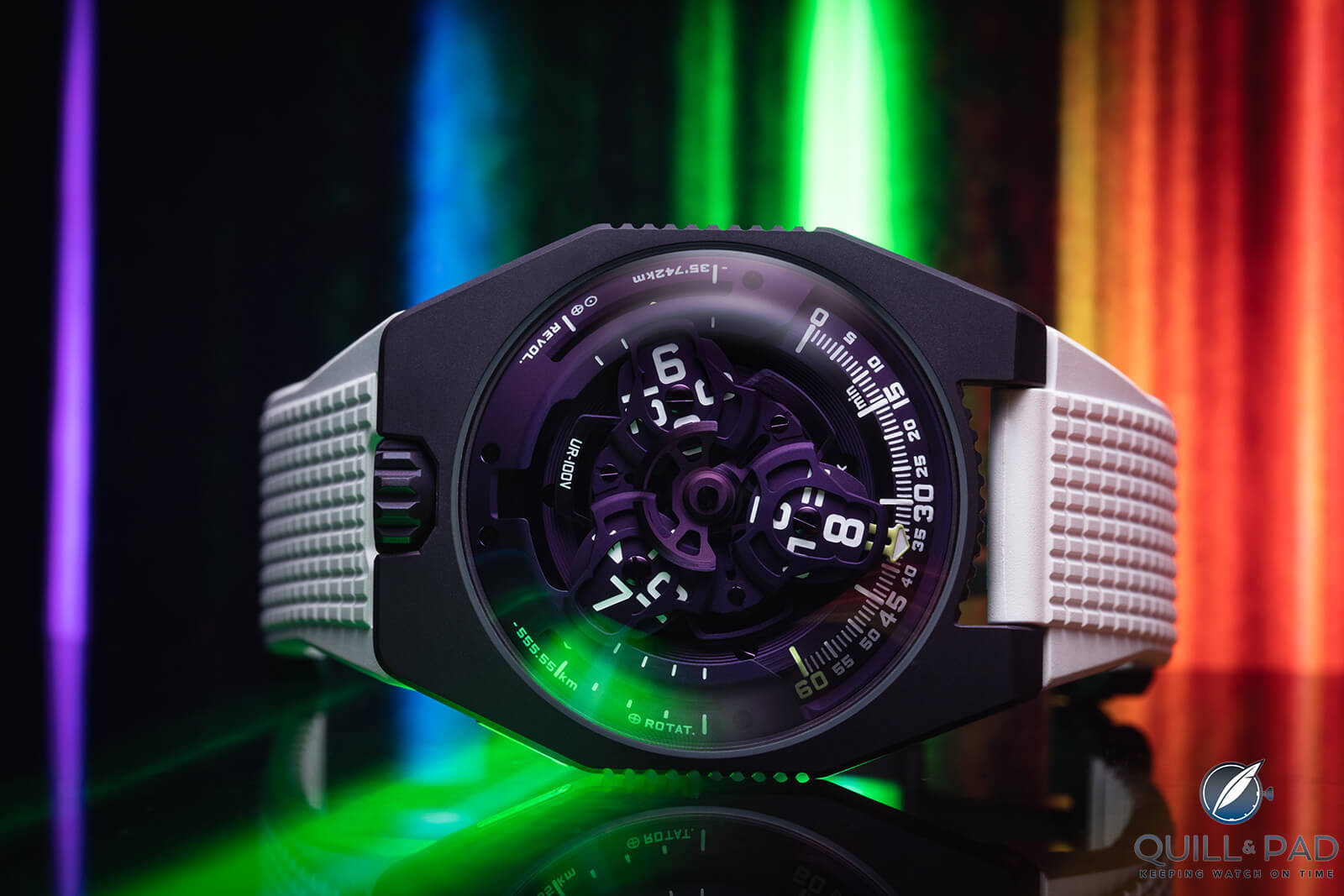 The design of the UR-100V stays mostly true to the original, with the main changes relating to legibility of the hours and the overall finish, which is where the new designation “Ultraviolet” comes from. Almost every component from the case, dial components, and satellite mechanism have been coated with a deep purple DLC coating, with the case being shot-blasted after coating for an even deeper purple matte hue. The shift to the bold purple hue makes the satellite display almost glow from within the case, taking the vibe into deep space.

The caliber has been updated, or should I say, was updated to create the “V” designation, switching from the original UR 12.01 to the updated UR 12.02. The update mainly altered the design of the carriage housing the satellite disks. Each carriage previously surrounded the disk with an opening towards the center of the dial to display the hour numeral. For the UR 12.02 caliber this has been swapped so the opening is now on the outer edge, directly above the minute pointer.

The change requires swapping the design of the disks so the numerals would be facing “up” at their relative 6 o’clock position instead of their 12 o’clock position, otherwise the carriage change would have simply exposed upside-down numerals. The update moves the current hour numeral into a more visually balanced position, previously the current hour was a bit disjointed as it hovered near the center of the dial. Now the hour follows right along with the pointer and improves readability at a glance.

The rest of the mechanism and display stays generally the same, including the two astronomical indications along the upper edges of the dial. Interestingly I have one small nit to pick with these. The scale for distance traveled at the equator is from 0 – 555.55 km even though the actual distance traveled at the equator calculated from the average rotational velocity of 0.4651 km/s is 558.12 km. That difference is imperceptible at the scale of this measurement and varies slightly over time, but the number is definitely a rounded average not tied exactly to the numbers I have found for reference.

On the right side the display indicates the earth’s orbital speed in terms of distance traveled around the sun every 20 minutes listed at 35,742 km. Once again this is slightly off from the calculated 35,736 km as a result of the 29.78 km/s average orbital speed. If Urwerk was able to find a figure with more significant figures (as theirs calculates from 29.785 km/s) then this could be the cause for the discrepancy, but according to data from Nasa updated to December 2021 that isn’t what I’m finding. I’m always interested in fact checking these types of figures because I use it as a refresher for myself and to see what people may have used to calculate astronomical numbers. 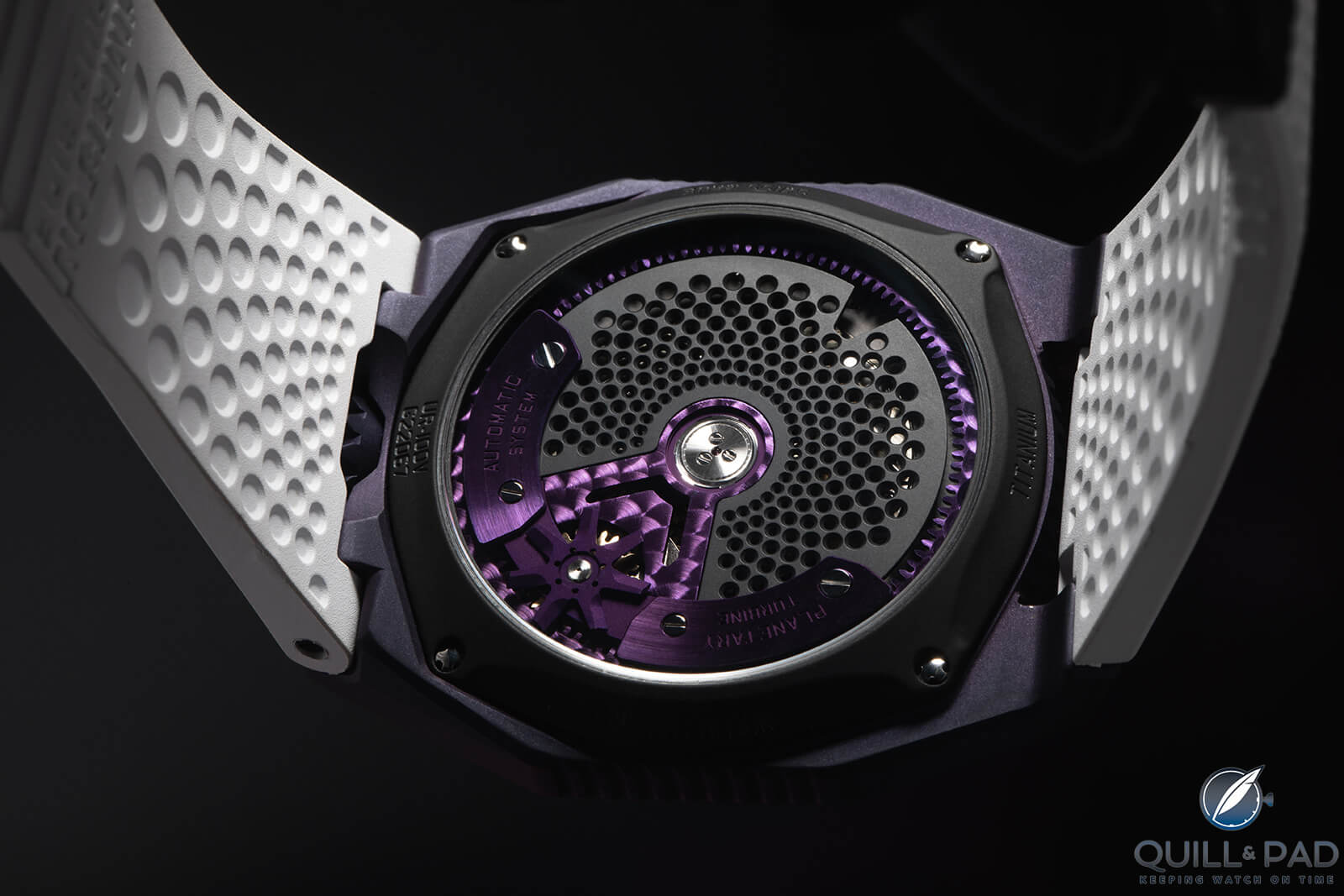 The discrepancies are so small that they don’t matter in the context, well under a one percent difference, but it does demonstrate the fact that these relative numbers can sometimes be hard to pin down due to variations in orbit, date of the calculation, or extrapolating from different reference numbers. This doesn’t take away from the enjoyment of the  Ultraviolet, if anything it refreshes my passion for details like these on watches, plus adding them is also an exercise in multifunctionality. There was not much required to add this indication since it tracks something relative to the standard motion already occurring with the mechanism.

Some might argue that the indication isn’t very useful, but the point is knowing that you can add scales and reference information to whatever you design since time relates to so many things, especially astronomical topics. That is sort of the core of the UR-100V collection as a whole, and the Ultraviolet piece especially. Even the choice of the deep purple and naming it the Ultraviolet. Urwerk co-founder and chief designer Martin Frei said he specifically chose the violet hue because it’s the last color humans can see before light enters the ultraviolet spectrum.

Frei speaks of how it reminds us of the edge of perception, the boundary of what humans can sense without artificial aids. Celebrating the boundary is celebrating our limits and how we perceive the universe in all it’s splendor. I can really appreciate his take on the color and the concept, including how it fits with the astropunk vibe we’ve always gotten from Urwerk. It all started with me loving the UR-100V Ultraviolet because it was a stunning purple color, but it grew into such a deeper concept. 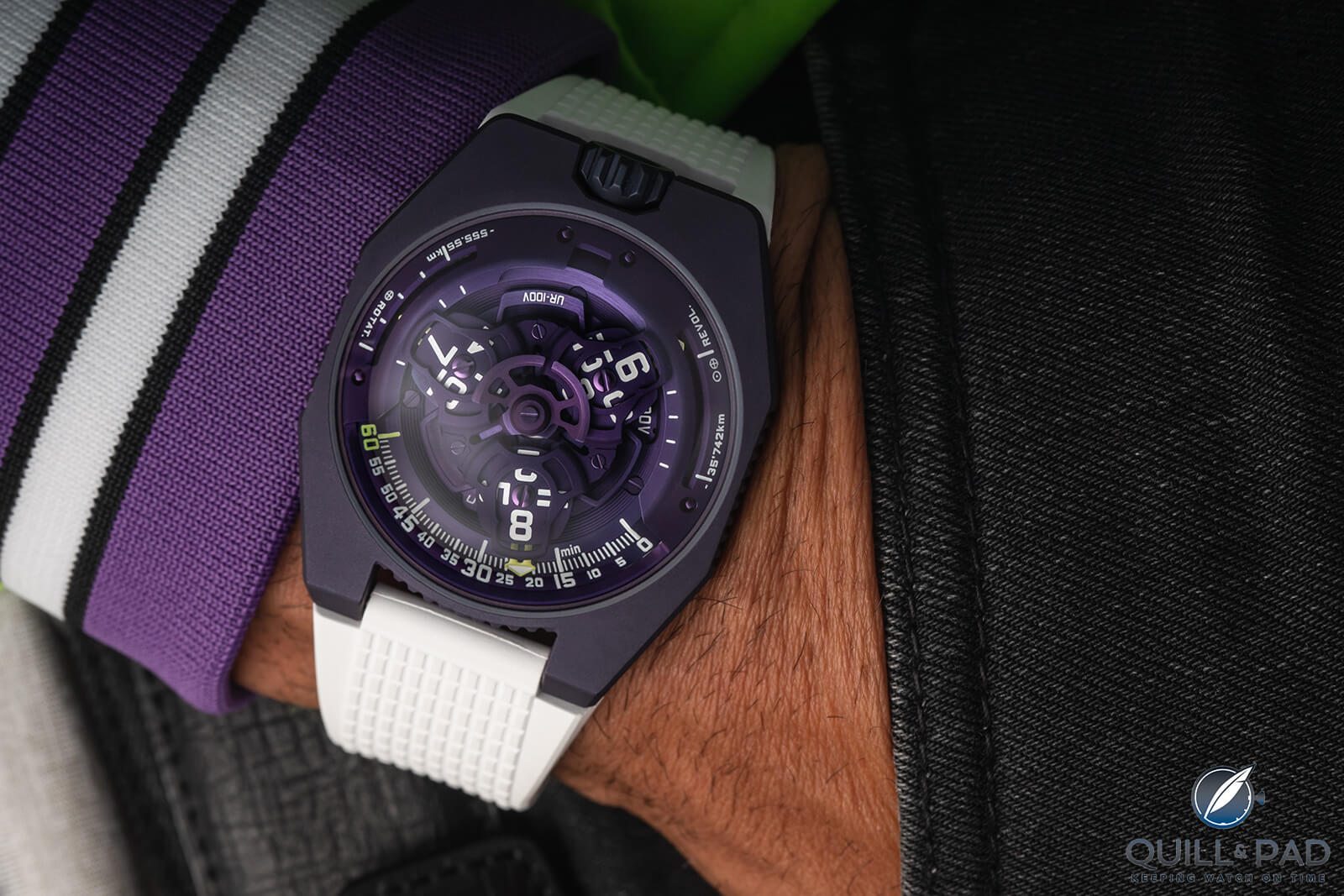 Urwerk UR-100V Ultraviolet on the wrist

The best part for collectors that dig the aesthetics is that this piece won’t be a limited edition, it will only be limited by production capacity. Not to mention that coming in at 55,000 CHF it is the most accessible Urwerk you can buy. It is still well outside of my price range, but I will always commend brands for trying to provide the customer with as much bang for their buck as possible.

But in the end, it is the mechanics and the color that speak to me the most and make the UR-100V Ultraviolet one of the coolest and most wearable Urwerk pieces available. Sitting at the edges of human perception has never been this cool.

Before it goes out of my range of vision, let’s break this down!

Felix Baumgartner, Urwerk, Harry Winston, And The Opus V: Where On Earth Did That Come From?

Urwerk UR-T8 ‘Transformer’: If You’ve Ever Wondered What The Lovechild Of A Reverso And A Tyrannosaurus Rex Might Look Like . . . (+ Video)