In the first article I ever wrote here at Quill & Pad, I expressed my strongly held view that all watches were made to be worn – and that if you can’t afford to break them, you shouldn’t buy them! (See Why You Can’t Afford To Buy Your Watch If You Can’t Afford To Break It.) 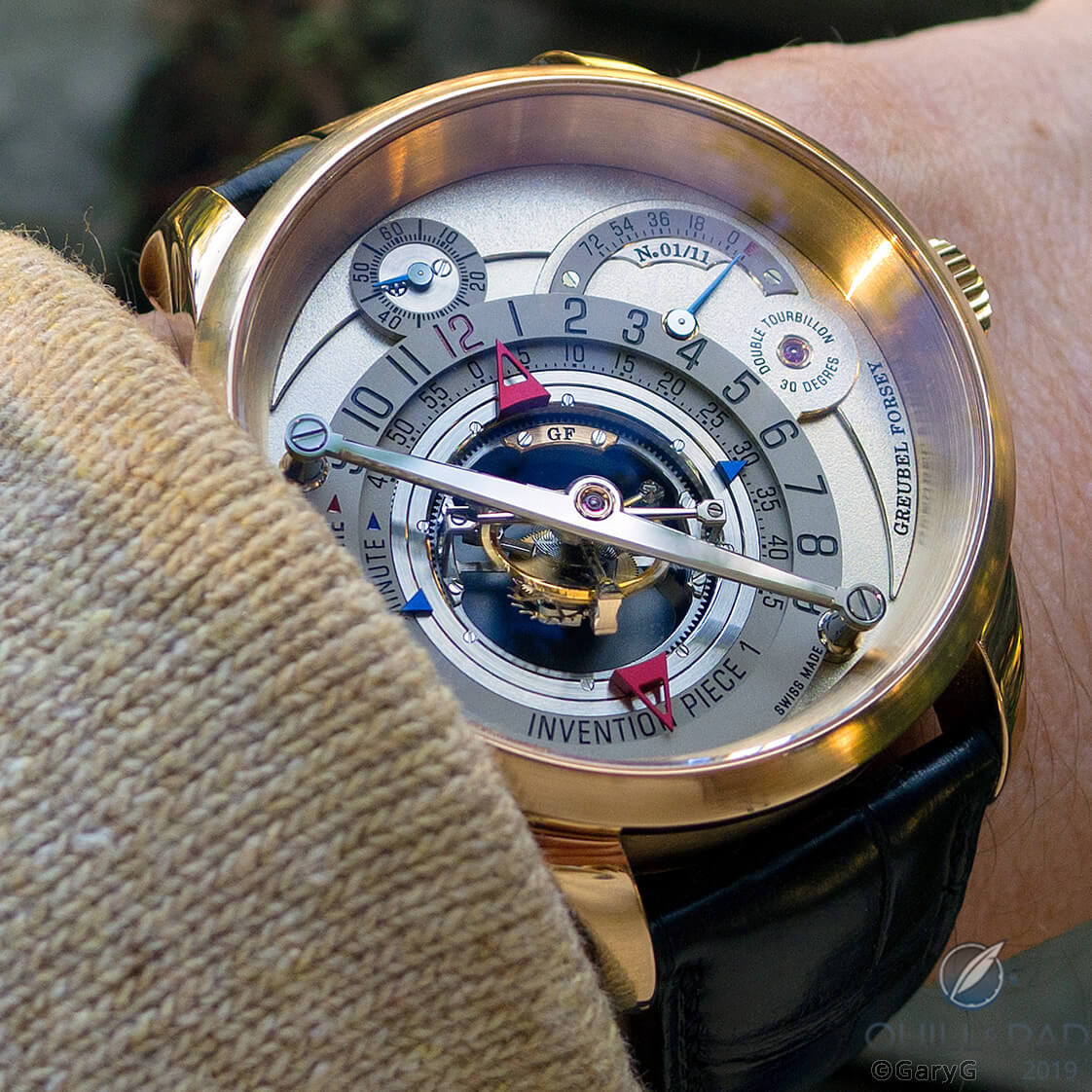 Wearing them all: Invention Piece 1 by Greubel Forsey

That said, while I wear each and every one of the watches in my collection from time to time, some watches are more suited to daily wear than others.

In a response to one of my recent Quill & Pad articles, Chris B asked, “Inquiring minds want to know, what are your favorite daily wearers?” His question got me thinking, both about which pieces in my assortment are the go-to routine watches for frequent wear and, at a more fundamental level, what makes a watch a “daily wearer.”

I’m guessing that if you did a poll of what folks think of as a daily wearer, you’d get a lot of votes for pieces such as the Rolex GMT-Master and Omega Speedmaster: robust workhorses (I will not use the term “beater” here as it seems to inflame the emotions of some of our gentle readers) that keep good time, can take a licking, and can cover a range of wearing occasions from beach to boardroom.

If you’re Bill Gates, a more modest Casio Illuminator apparently does the trick; and in my collection the daily-wear watch that matches this category most closely is my Vacheron Constantin Overseas “Deep Stream” Chronograph. 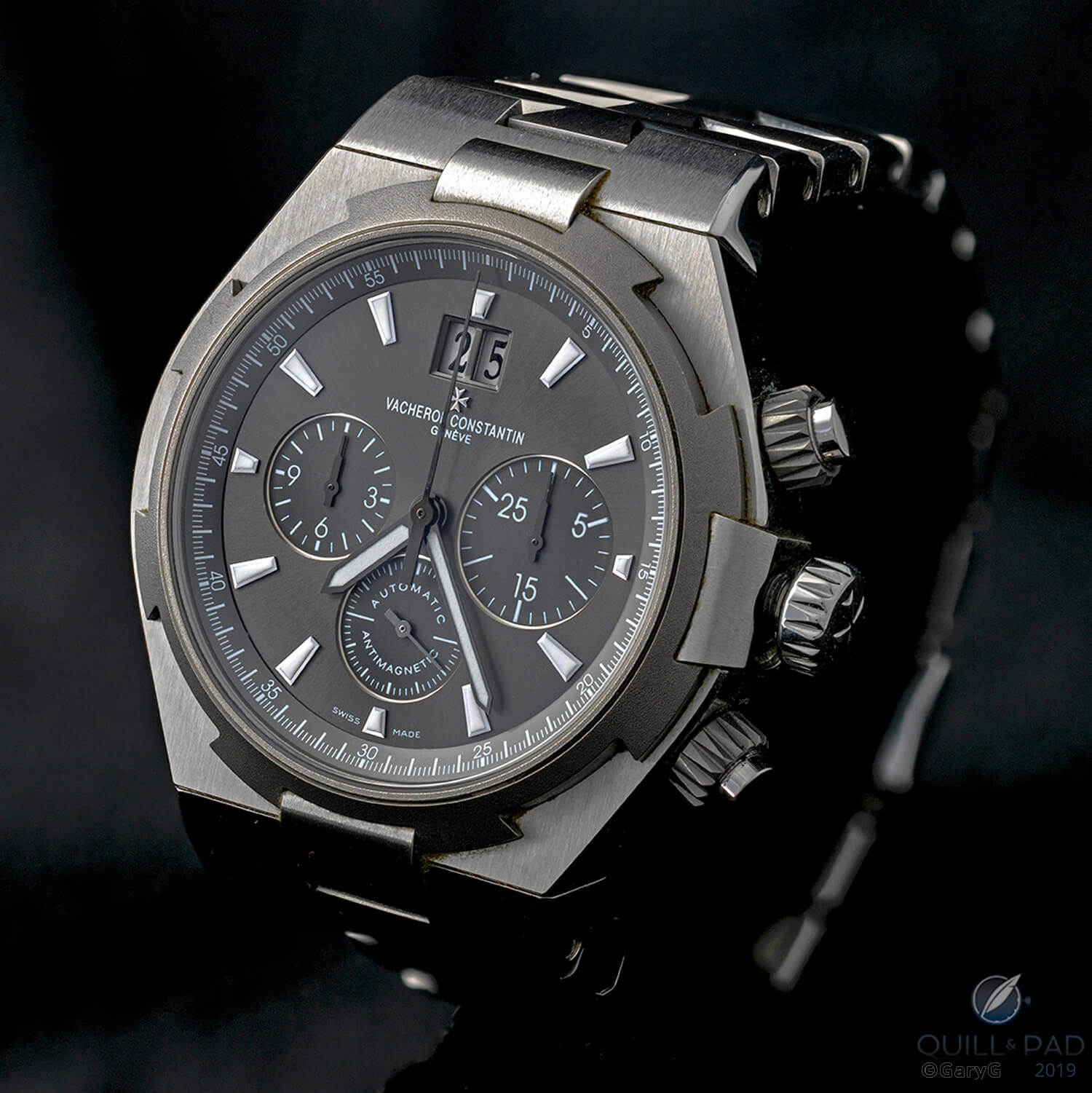 It could just as well be my Rolex Batman GMT-Master, but truth be told I almost never wear that watch! Good news, I suppose, for its future owner as the piece is in virtually as-new condition.

On other days when I’m hankering for a sporty look, I don’t hesitate to slap on my vintage and seemingly indestructible Omega Ploprof. It’s perhaps marginal as a true daily wearer as its somewhat outlandish appearance does tend to draw attention, but since I do wear it without reservation I’ll leave it on my list. 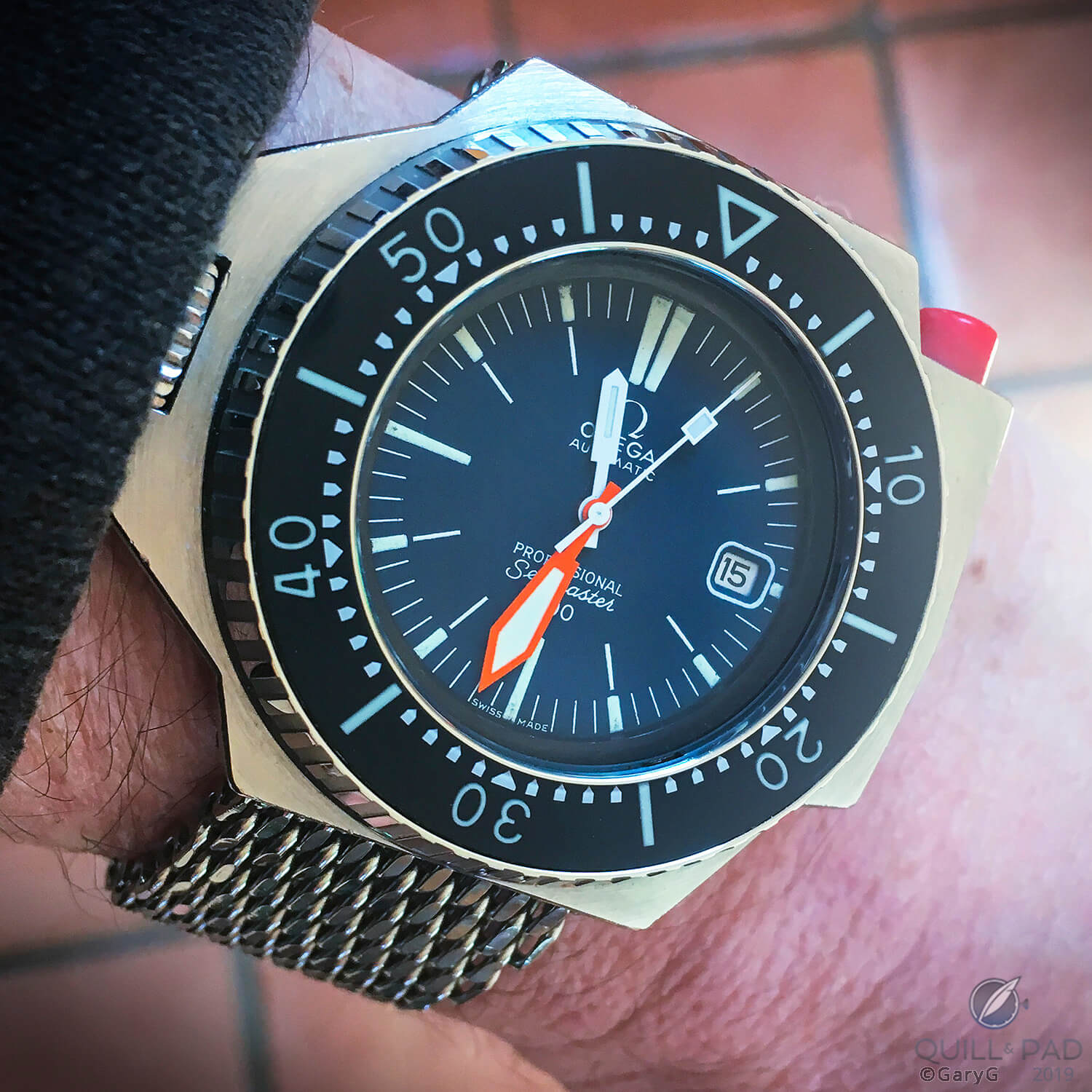 But if “daily wearer” were limited to the concept of pure sport watches I think we’d be missing a lot.

We’re all aware of the entire category of what I’ll call dress-sport watches, including pieces like the Audemars Piguet Royal Oak (at least in its simpler incarnations, and for me leaving out the Offshore line) and Patek Philippe Nautilus. These watches are frequent wearers for many, and, current market mania for steel Nautilus pieces aside, have certainly benefited from the shift to more casual styles in the workplace.

For me, this niche is filled by my Jaeger-LeCoultre Reverso Grande GMT; arguably a dress watch at its core but in steel and on its fitted steel bracelet a watch comfortable in a wide range of environments. 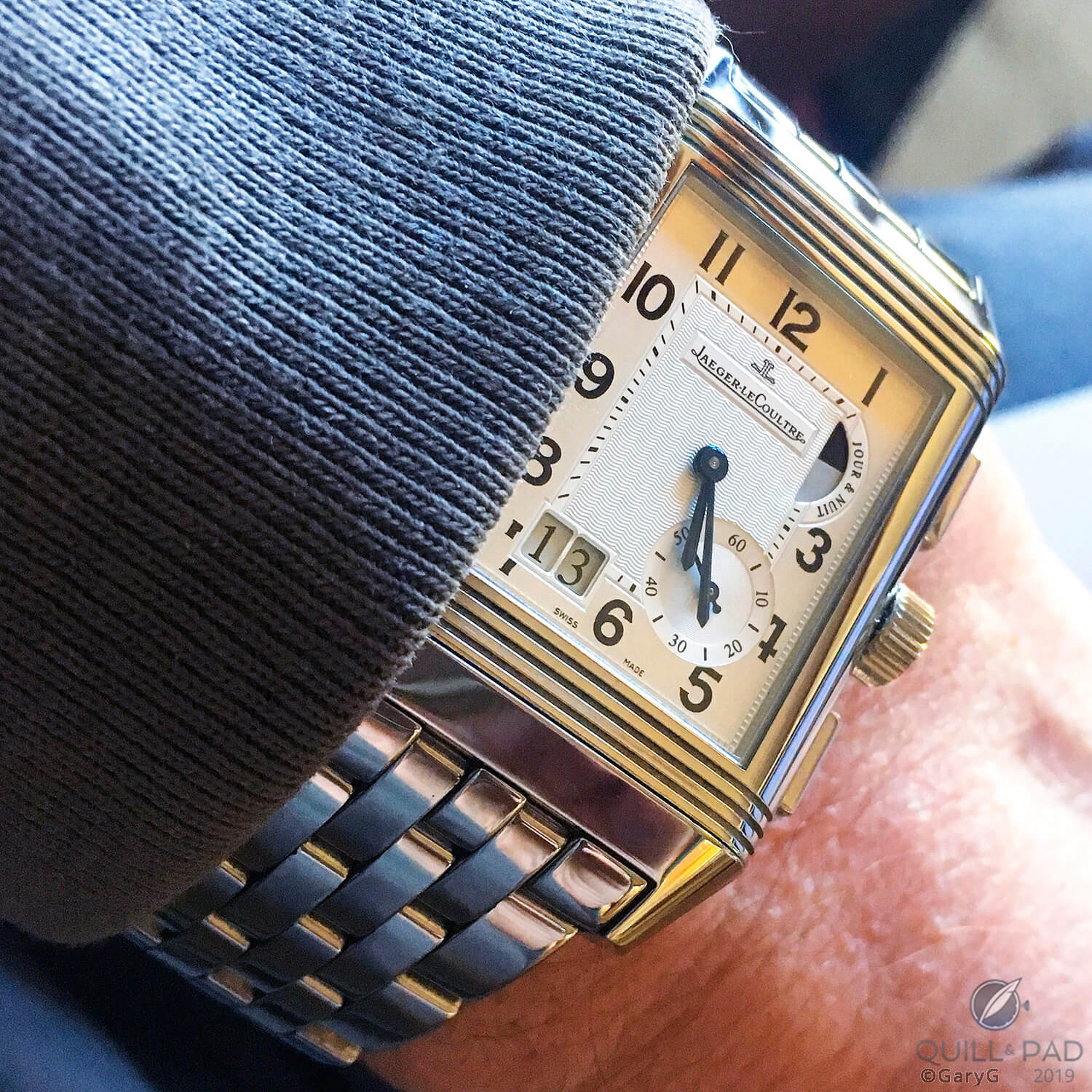 One step dressier: the tweeners

Before we’re done here, I promise to come back to a few dressy and flashy pieces I don’t consider daily-wear watches. But for now let’s continue working our way up the spectrum from sporty to formal.

It’s at this next in-between level that we find wearable watches such as the Tsunami from Hajime Asaoka and 1941 Remontoire by the Grönefeld brothers, both of which I own in steel and wear with some frequency. And I realize that those are somewhat on the pricey end of the scale, so for the purpose of this discussion I’d also include my Timex Marlin re-issue, Jaeger-LeCoultre Tribute to Reverso 1931, and Jaeger-LeCoultre Master Ultra-Thin in the mix. 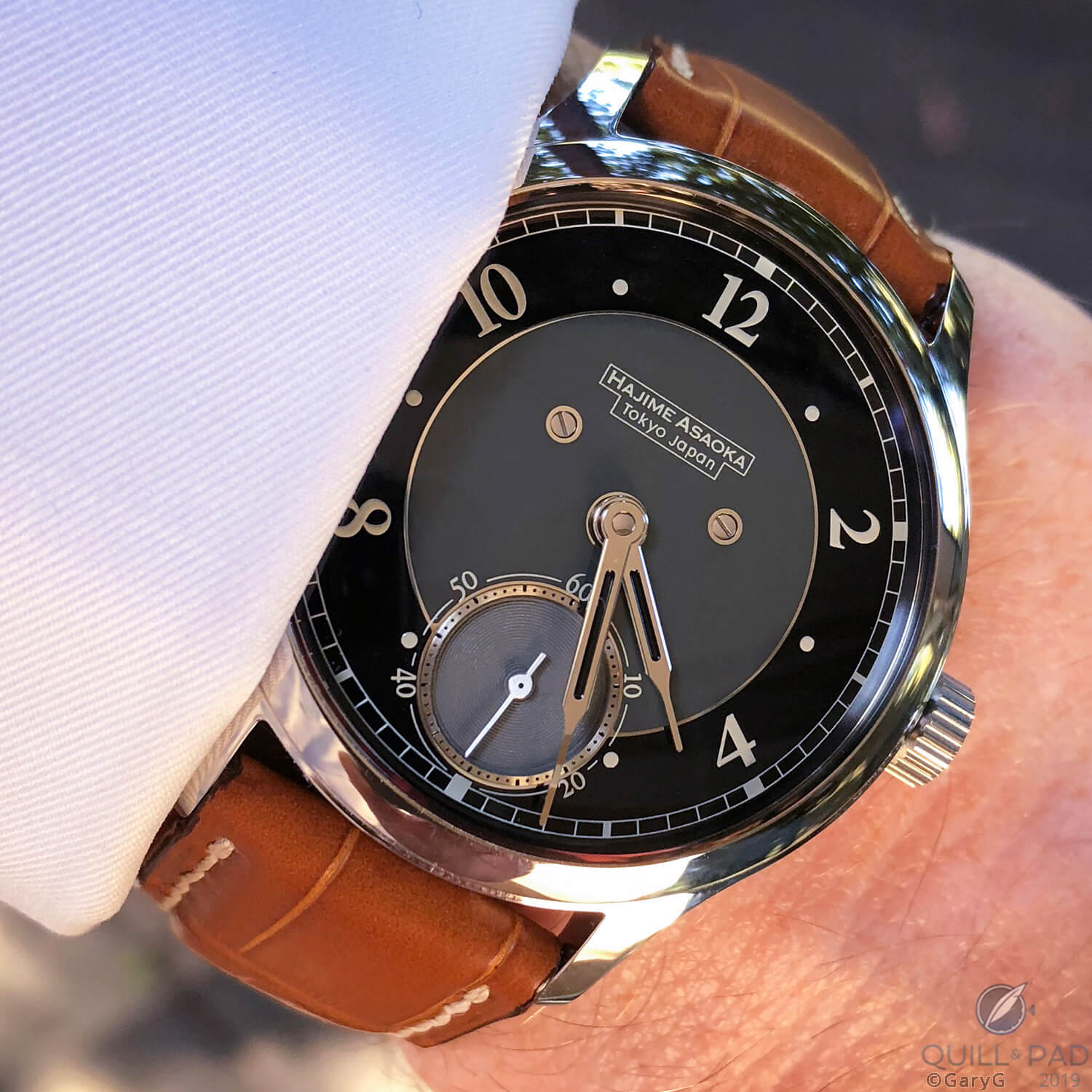 It’s also at this level that some of my limited set of vintage “dress” watches come into play, from a few of my grandfather’s more heavily worn steel wristwatches to my Jaeger-LeCoultre Futurematic and the first watch I ever bought for myself, my early 1970s Bucherer chronometer.

All of the watches I’ve mentioned so far are in white metal cases – in fact, all are steel – but upon further thought that’s not a necessity for me when considering daily wear.

For example, there’s the vintage Vacheron Constantin Reference 4560 that I bought last year at auction and have worn at least five days per month since: a yellow gold watch on a yellow gold bracelet.

What makes it a “daily wear” watch when other similar pieces would be way too blingy? For me it’s a combination of its charming, somewhat time-worn look and the light weight of the bracelet that makes the watch much less imposing than other full-gold watches. 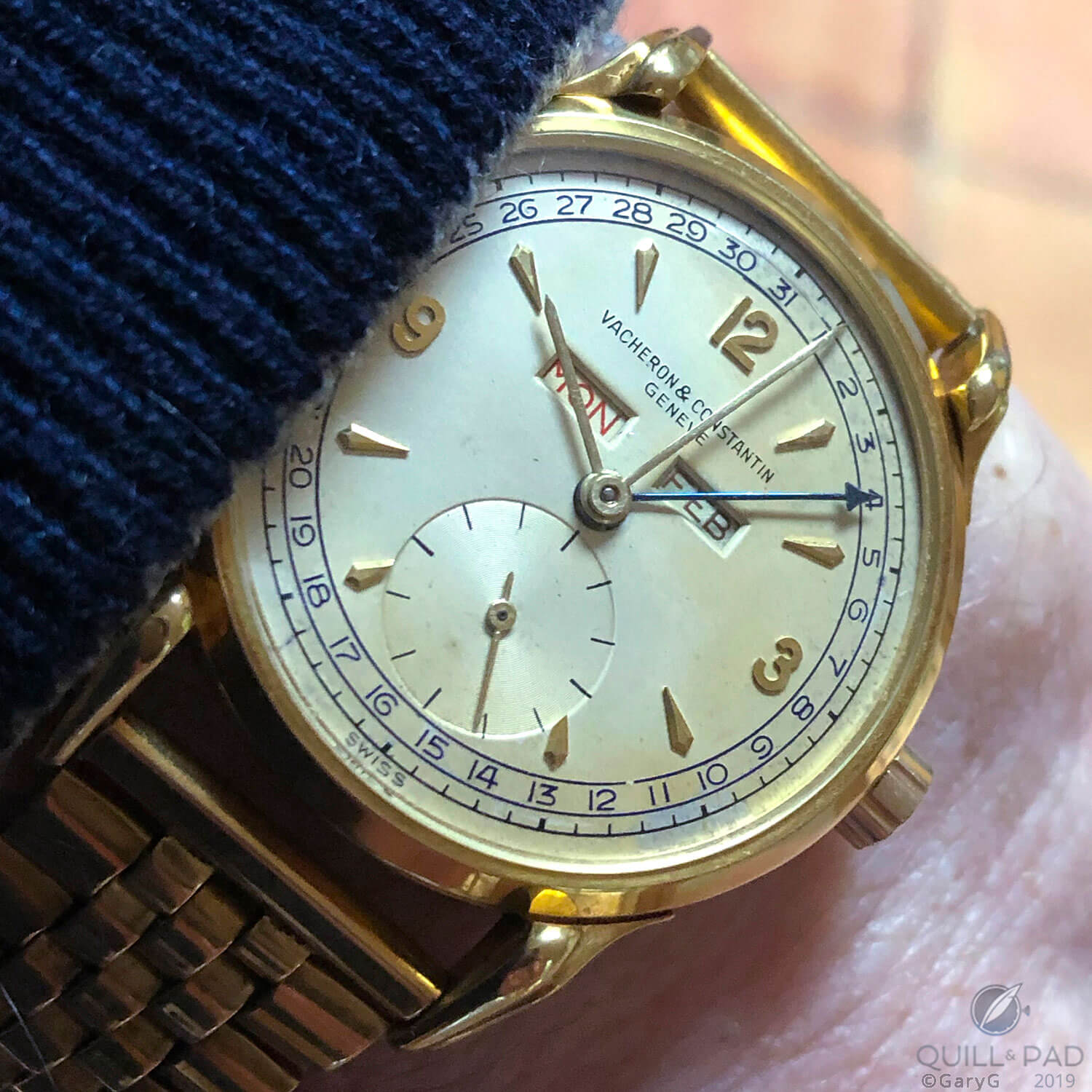 I suppose I’m now getting a sense of why some folks are saying that the contemporary formal dress watch is an endangered species – like our Martin Green in The Death Of The Dress Watch: Is It Time To Write Its Obituary?

So far, we’ve talked about a lot of sporty and more casual watches as well as some golden oldies. And as the frequency of my own formal client interactions has begun to taper off, I do find that some of my traditional standbys are, for lack of a better term, standing by more and more. 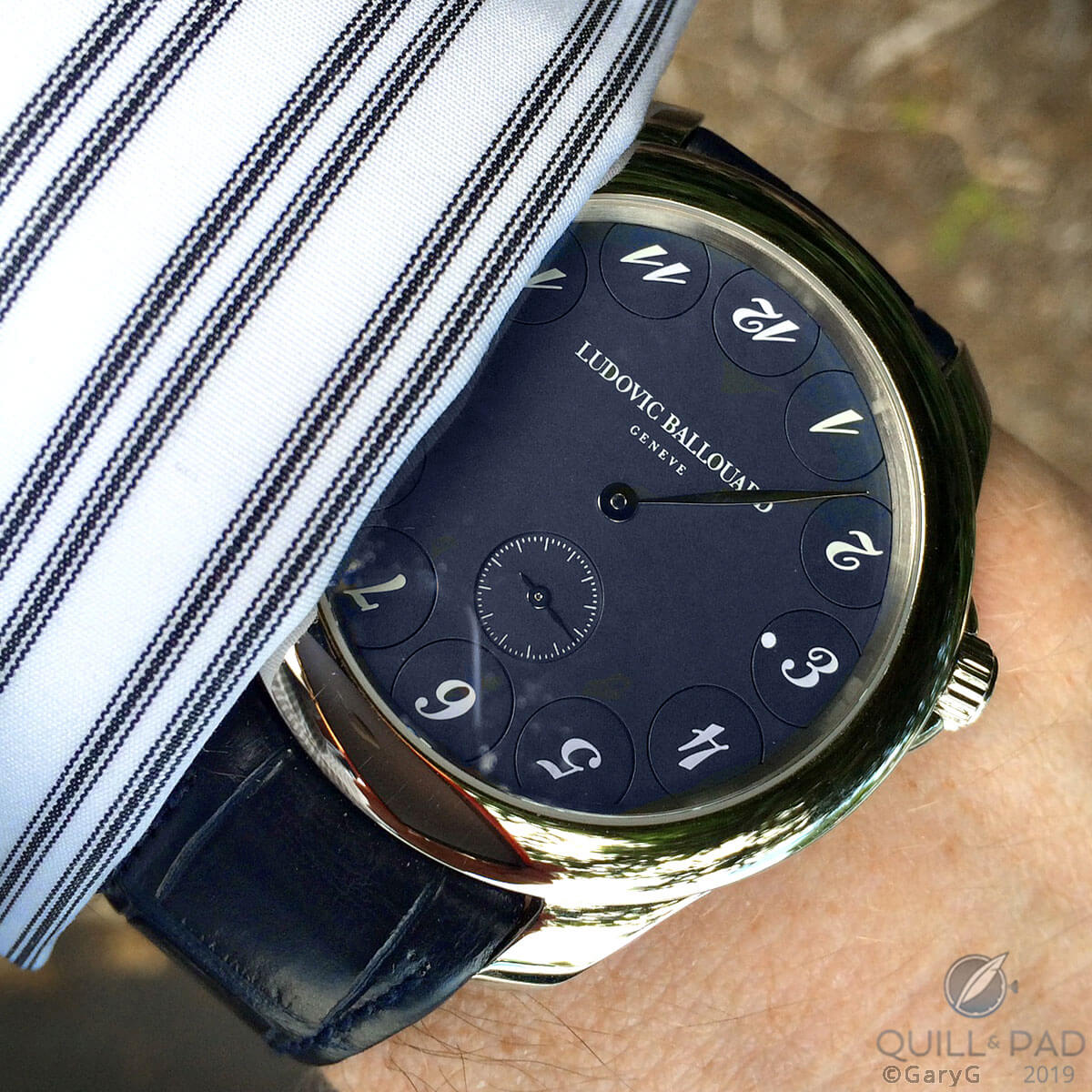 There are some exceptions: at least when I’m wearing long sleeves, I’m not reluctant to don watches like the whimsical-but-stealthy Upside Down by Ludovic Ballouard, my first-generation Géographique from Jaeger-LeCoultre, or even the super-complicated but anti-bling Equation of Time by Audemars Piguet in white gold with dark grey dial.

I’m not going to change the oil in my car or scrub the railings on the patio (yes, I still do both of those) wearing any of these, but for tooling around town on errands and meeting up with friends, each provides a jolt of pleasure when seen peeking out from under the cuff while not attracting undue attention.

Definitely not daily wearers – at least for me, not right now

If all of these various types, sizes, and brands of watches can be worn on a daily basis, what’s left out?

For me, special-occasion watches include the tourbillons in my collection as well as some of the flashier pieces – which makes the A. Lange & Söhne Pour le Mérite Tourbillon on its fitted gold bracelet a double qualifier. 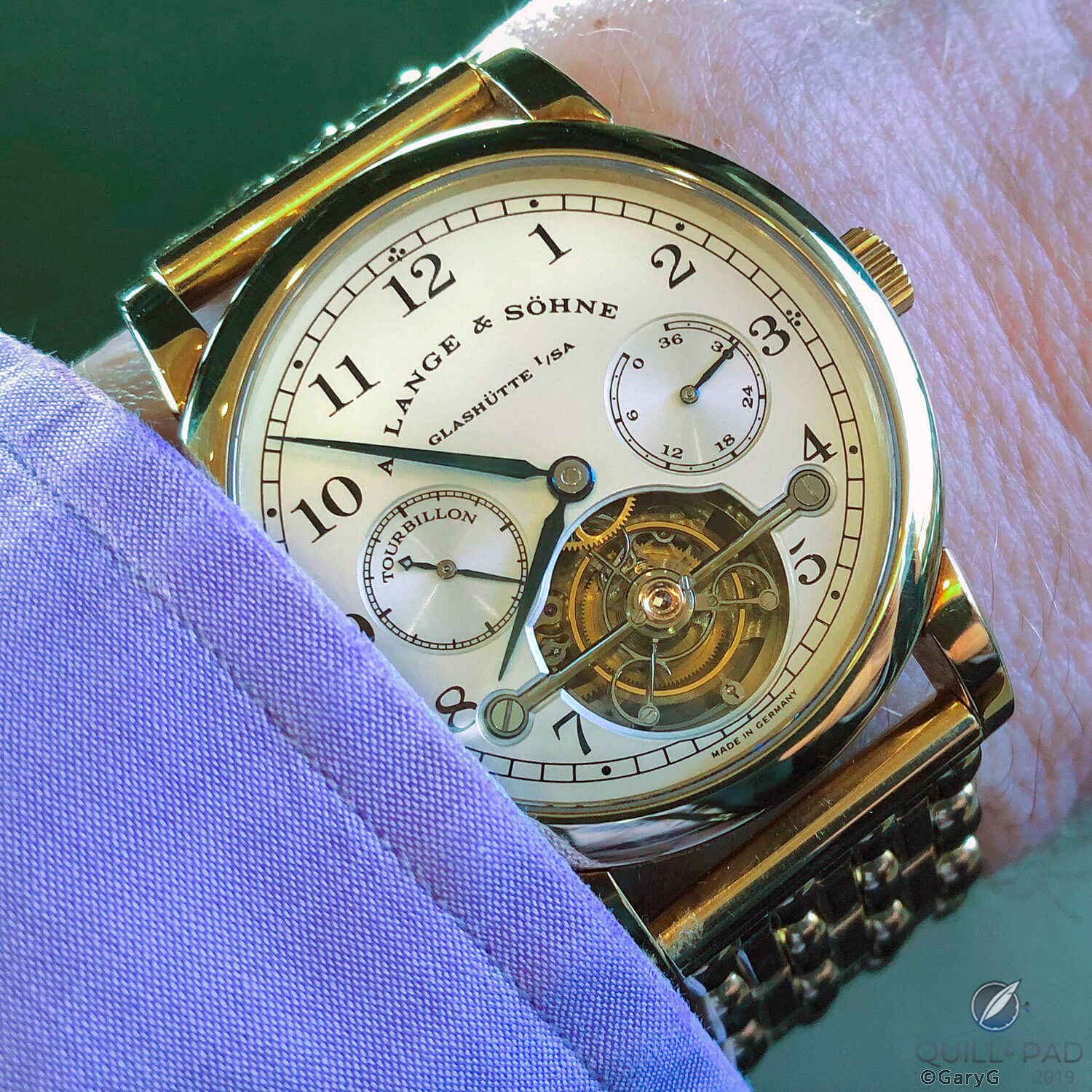 And while I have a real love for dress chronographs, the formality of pieces like the Patek Philippe Reference 5370P and Voutilainen Masterpiece Chronograph II, as well as the striking pink gold case of the latter, make them dress-up watches rather than knocking-around pieces as my lifestyle becomes less structured and increasingly outdoor. 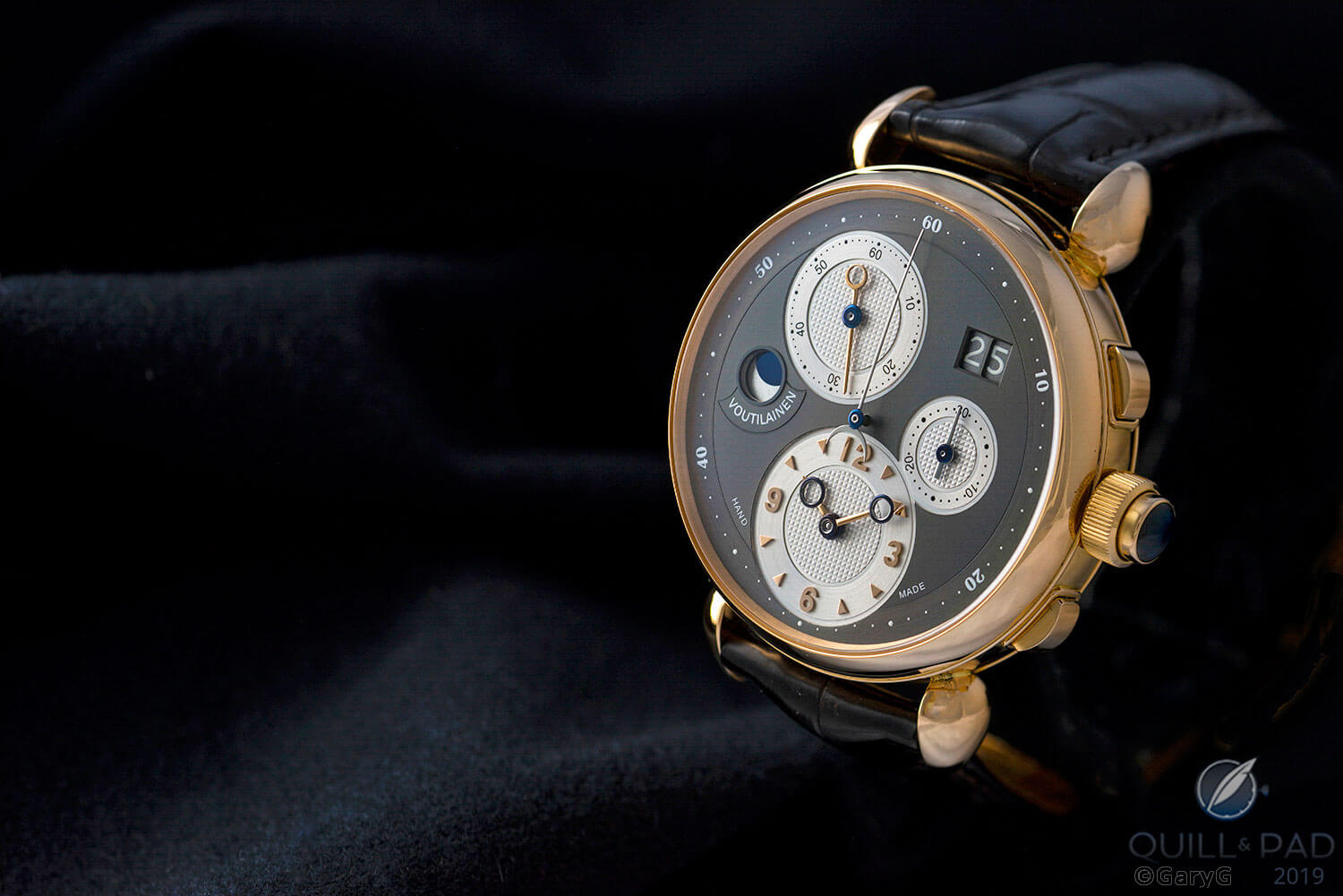 Can’t run the stopwatch if you aren’t wearing it: Voutilainen Masterpiece Chronograph II

My Philippe Dufour Simplicity? In many ways it’s an almost ideal watch for daily wear with its white metal case, 37 mm diameter, and simple lacquered dial adding up to a physical presence that’s unlikely to stand out enough to cause a ruckus. Unless you’re at a watch enthusiasts’ gathering, that is!

That said, the run-up in value of that piece makes me just a bit nervous about wearing it quite as frequently as I used to, which is a shame.

So, what does make a daily wearer?

Looking over the lists of yeses and nos above, I’m seeing a few decision rules for classifying a watch as a piece for routine wear.

Comfort: I do like wearing heavy watches, but on a day-in, day-out basis I find it nice to have pieces that have somewhat lower heft on my wrist. Comfort also includes the absence of nagging details: I owned and wore an Omega Speedmaster for a while, but the jagged edge of the deployant clasp closure eventually drove me nuts, and the watch had to go. 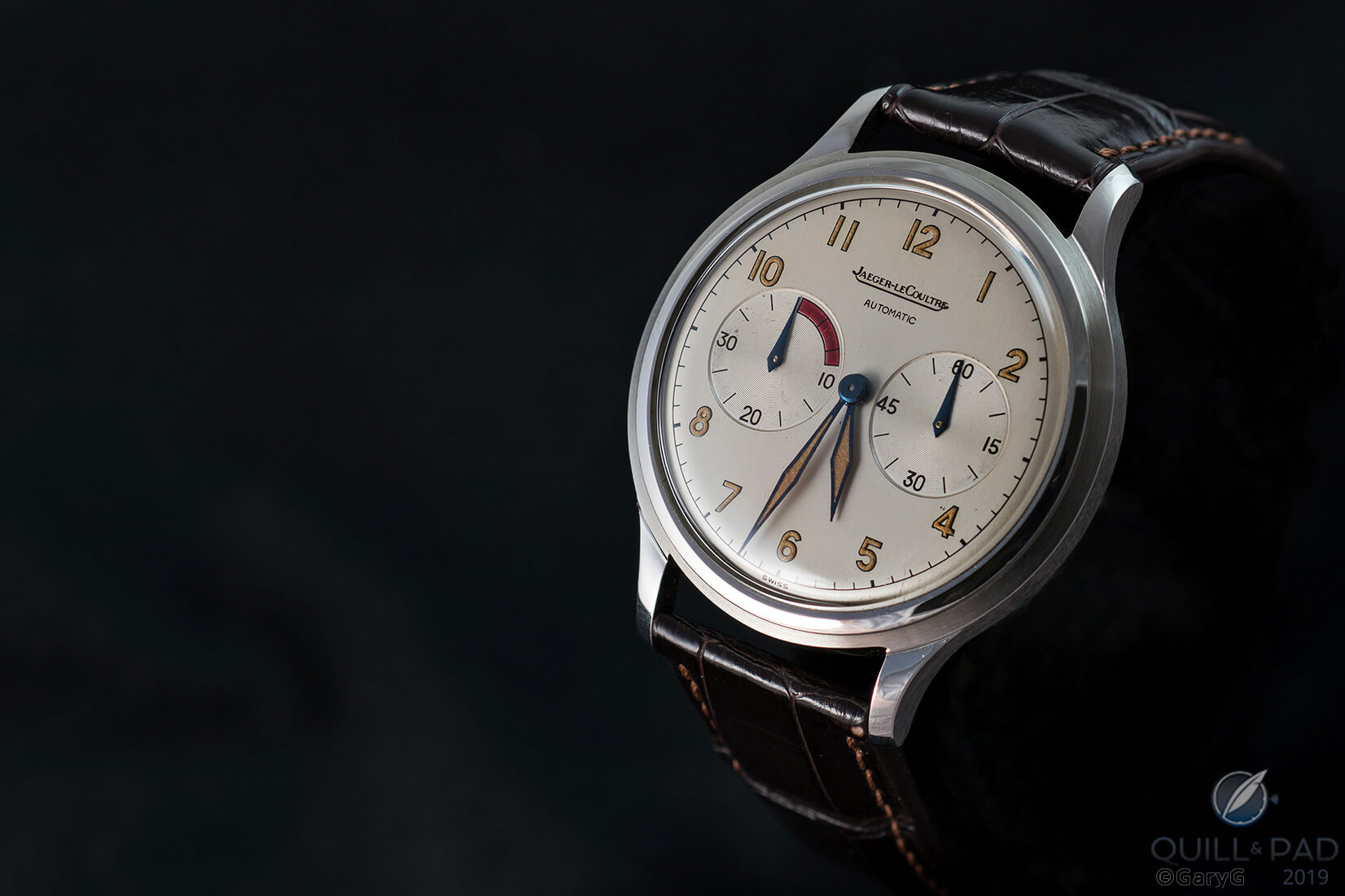 Robustness: No matter how careful you are, if you wear a watch a lot you are going to bang it from time to time. Robust movement construction, hardy case materials, and a profile low enough on the wrist that you’re not going to knock your watch into every doorknob you pass are all positive features in a world of bumps and bruises. And when those knocks do occur, the piece has to be one for which you are content to consider dings as signs of personality rather than horrifying scars.

Stealth: Perhaps I’ve gotten more circumspect as I’ve aged, but these days I’m less likely to wear conversation pieces like the Vianney Halter Antiqua as part of my daily routine. And that isn’t just true of more formal or costly pieces; some “casual” watches, like the Konstantin Chaykin Joker, also are only occasional wearers for me due to their striking aesthetics. 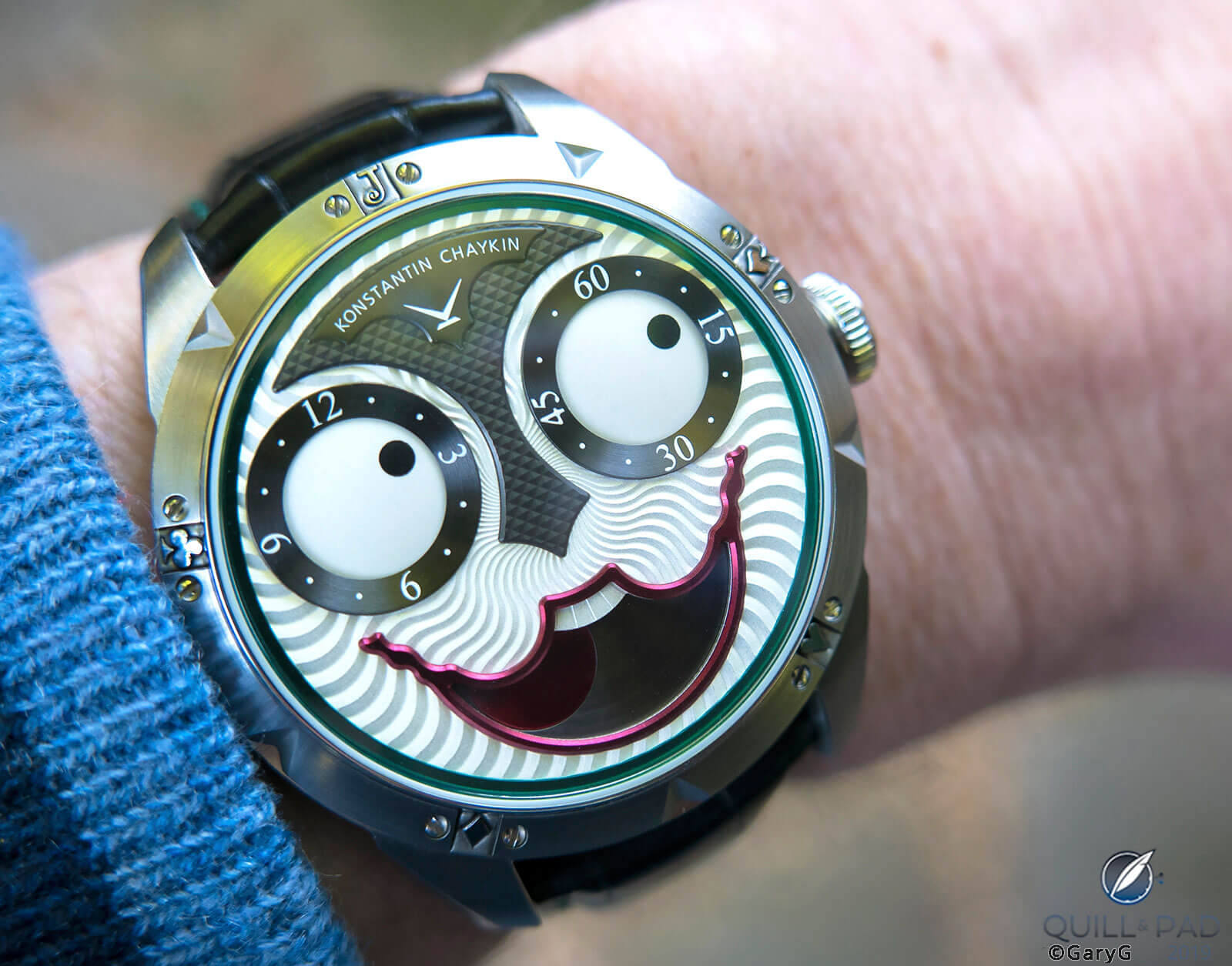 Secret weapon for an occasional lift in mood: Joker by Konstantin Chaykin

Versatility: Going to the opera? A specialized piece like a Vacheron Constantin skeleton is just the ticket. But if you’re going to have one watch on for several days, it needs to be appropriate for whatever range of activities make up your week.

Personal appeal: All of that said, let’s have no boring watches! That Timex of mine is a recreation of the first watch I ever owned and brings back pleasant memories every time I have it on my wrist. And a piece like my Vacheron Constantin Overseas has enough cool facets and contrasts that I’m tempted to give it a second look whenever I check the time, no matter how frequently I wear it. 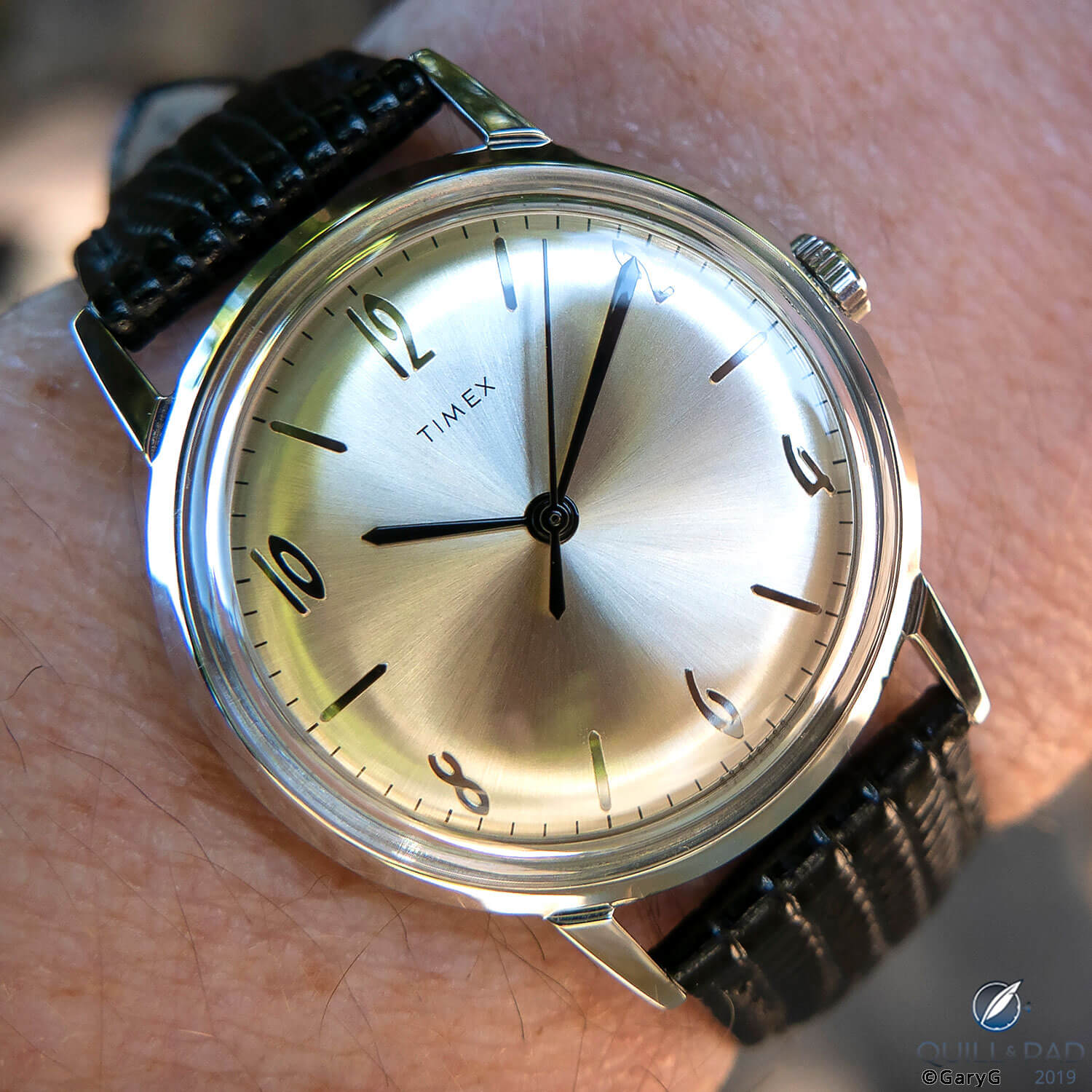 Thanks very much, Chris B, for getting me thinking about the whats and whys of daily-wear watches. I’ll look forward to hearing others’ views on your own frequent wearers in the comments below. Happy wearing!

* This article was first published on August 22, 2019 at What Makes A Daily Wearer Wristwatch?

Cory Richards: A Vacheron Constantin ‘One Of Not Many’ And His Unique Piece Overseas Dual Time On Mount Everest