Why I Bought It: Kudoke Flieger Concept (KFC) – Reprise

Until 2019, Kudoke was a relatively unknown, small, independent watch company based in the town of Weifa in northern Germany between Dresden and the Czech border. Stefan Kudoke, owner and watchmaker, is well recognized for his engraving and skeletonizing skills: his watches usually have either an elaborately engraved dial and skeletonized movement or a skeletonized dial revealing wheels, springs, and levers with intricate engraving.

In 2019, Stefan Kudoke presented the new Kudoke 1 and 2 watches during Baselworld. Handling both watches, I thought that they were very different than the previous skeletonized Kudoke watches I was accustomed to. Both the Kudoke 1 and 2 have simple, elegant dials, the brilliance laying in the finishing and engraving of the newly developed movement (made in cooperation with Habring2).

Apparently, I was not alone. In the August 2019 issue of GQ, Wes Lang, a contemporary American artist hailing from Los Angeles, wrote an article on the Kudoke 1, stating, “Kudoke 1 represents the pinnacle of watch collecting.”

Then in November 2019, husband-and-wife team Stefan and Ev Kudoke were called to the podium at the Grand Prix d’Horlogerie de Genève’s awards ceremony, often referred to as the Oscars of watchmaking, to accept the award for the best watch in the Petite Aiguille category, which rewards watches costing between 4,000 and 10,000 Swiss francs. Winning this award brought Kudoke some long-awaited publicity and has led to more commercial success. 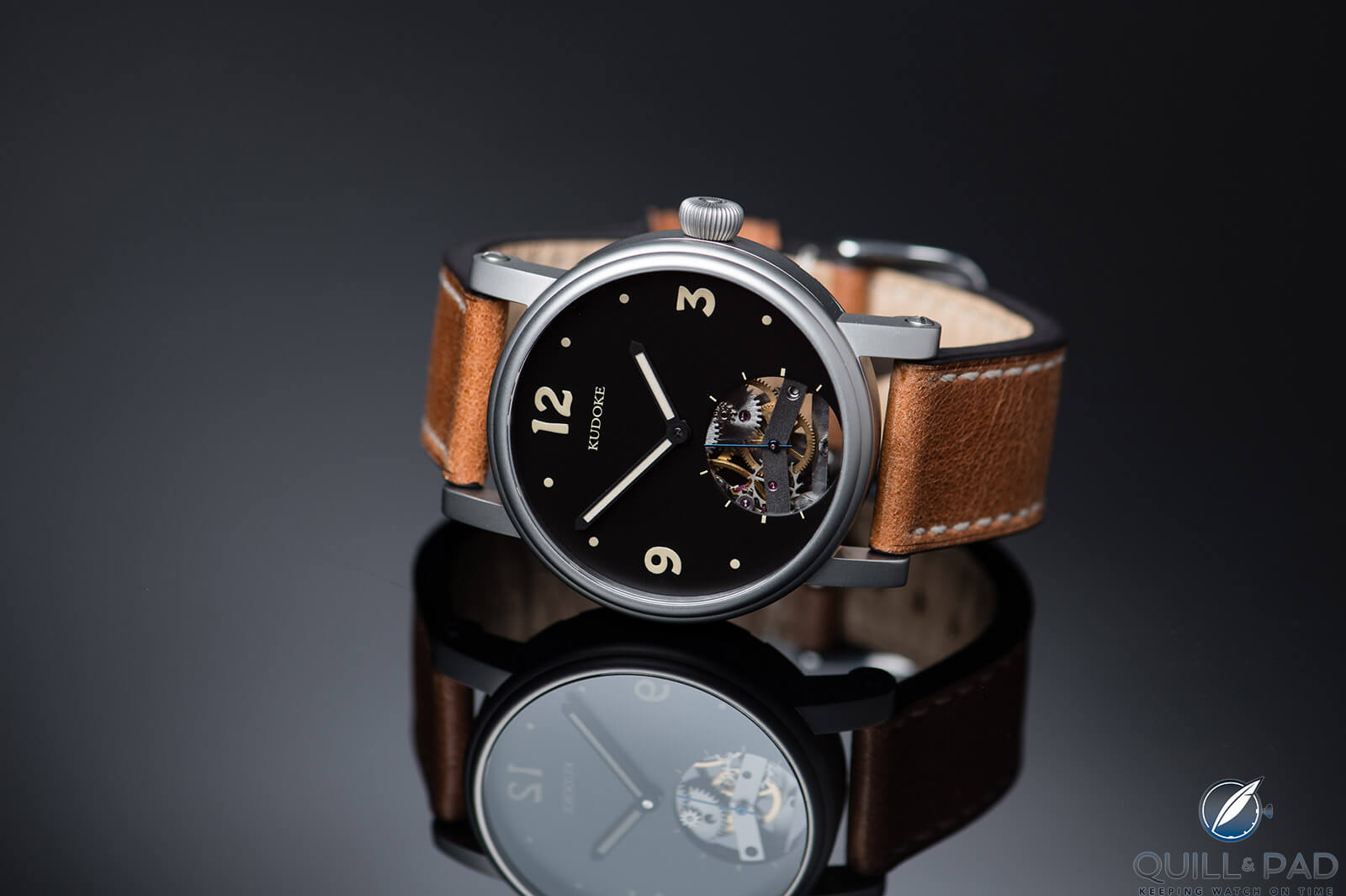 During that Baselworld trip I had arranged a winter visit with my two best watch friends, who are from Berlin and Prague respectively. In early December 2019 we drove to Weifa, an hour and a half from the Czech capital. Kudoke has a small workshop within the family home that can accommodate three or four watchmakers. At the time we visited, Kudoke employed one watchmaker from Korea.

After discussing the recent GPHG award, Stefan demonstrated his engraving process for movements as we moved from bench to bench. At one of these benches, we spied an unusual pilot’s watch with a skeletonized subsidiary seconds cutaway revealing an elaborately skeletonized manual winding Unitas movement underneath.

I call it an unusual pilot’s watch because it is not a traditional German flieger based on historical models, but rather Kudoke’s interpretation of a flieger watch. 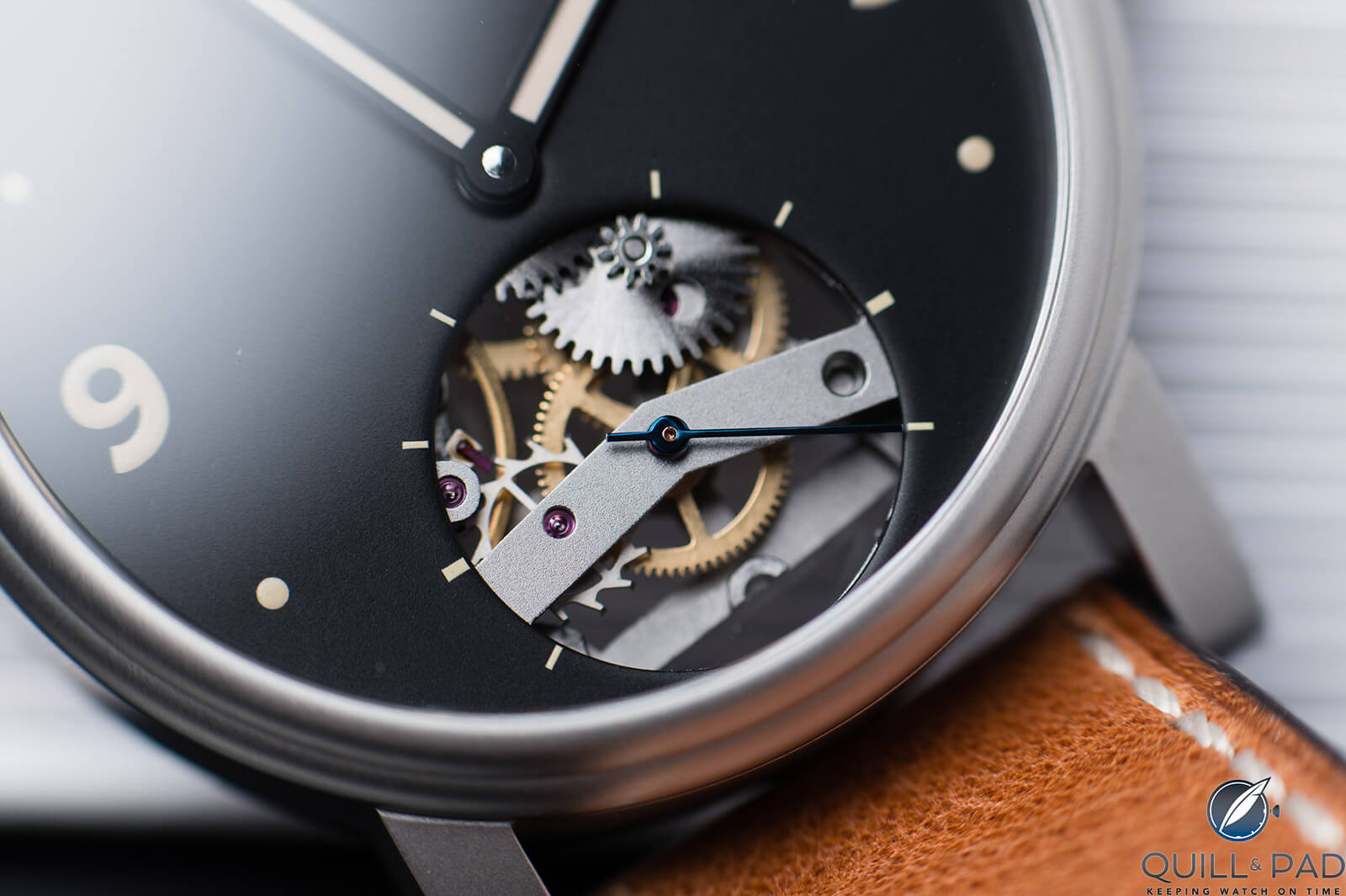 Stefan Kudoke has an affinity for flieger watches, so he decided to make his own a flieger prototype in 2017. He wanted to incorporate his traditional skeleton work, but not skeletonize the entire dial. So he designed the watch so that a majority of the dial had the typical minimal features of a flieger, but removed what would have been the subsidiary seconds subdial to reveal the bridge and wheels of the movement.

While he was very pleased with the outcome of the prototype, his focus was on the development of the Kudoke 1 and 2 at the time. Being a small family business, priority was given to the bigger project. In hindsight, it was the right decision thanks to the success that followed.

Due to lack of resources, the prototype flieger remained just that and the project was shelved. However, Stefan is still motivated to make a Kudoke flieger in future.

Only once was anything about this flieger ever published – in Wristwatch Annual 2018 as part of the Kudoke portfolio, where it is nonchalantly listed as “Kurt.” As Ev Kudoke, who takes care of most non-watchmaker duties within the family-run company, jokingly recalls, Stefan wanted to eternalize the flieger somewhere, which is why it can be seen there.

So this was a virtually unknown one-off concept watch sitting in the Kudoke workshop, and my heart soared. But . . .

Kudoke’s prototype flieger was love at first sight for me, however one of my friends on this trip had already discussed the possibility of acquiring this watch with Ev, and I was too late in making my request. But I was happy that it was going to friend who would enjoy wearing the unique flieger. 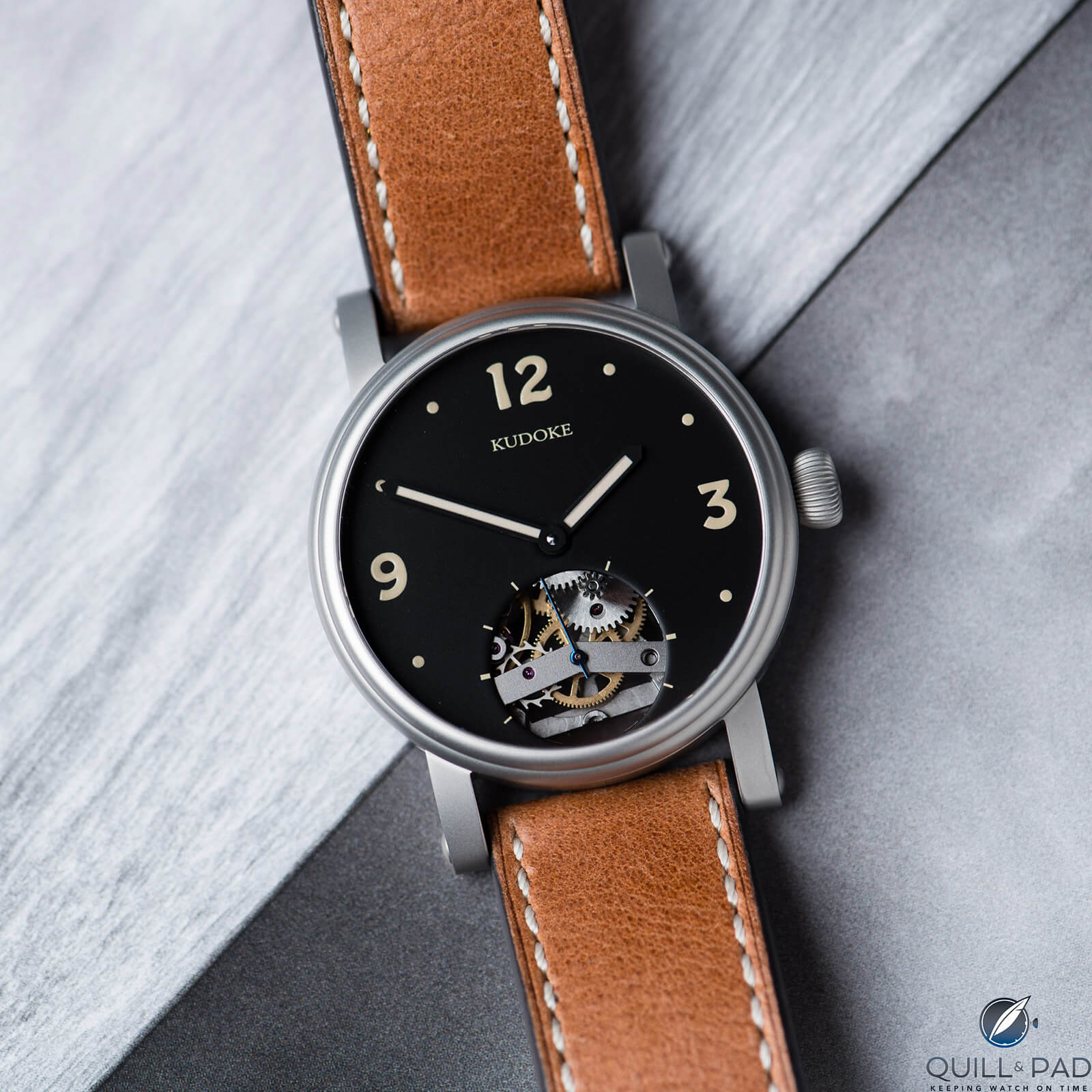 Fast forward to mid-2020, and I received a press release of a new variation of the Kudoke 2. I responded to Ev, thanking her for sharing the press release and casually asked if my friend had picked up the concept flieger. To my surprise, she responded that unfortunately he had had to back out so it was still available. Was I interested? After a few Floss dance moves, I replied with an emphatic all-cap YES! 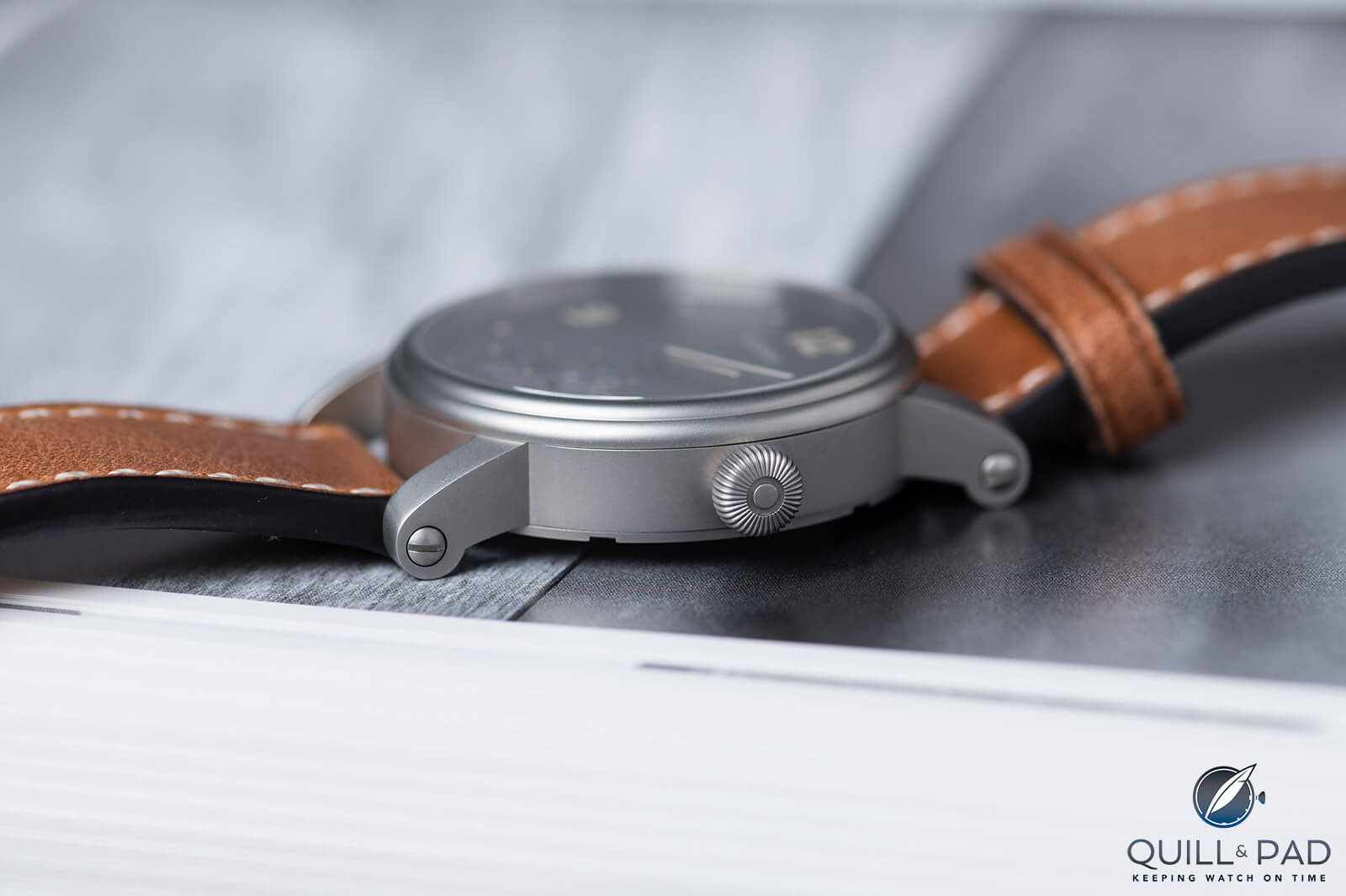 Before describing the detailed work on the movement, I would like to shed some light on what inspired Stefan Kudoke to specialize in skeleton work and engraving. He was first exposed to skeletonized watches in his early twenties while working in Glashütte and was particularly influenced by the special editions made by Kurt Schaffo for Glashütte Original. Stefan was fascinated by the filigreed structures and details and began to teach himself the craft of hand-skeletonizing and engraving.

After a couple of years of practicing and refining while still studying economics, Stefan decided to establish his own watch brand. His first models were called Black Beauty and HS1. Later he developed more figural watches like the well-known KudOktopus, which are more like little sculptures within the movement with the focus on engraving rather than developing a special movement. This way, Kudoke could combine his passion for special designs with his handcraft to create little ticking pieces of art. 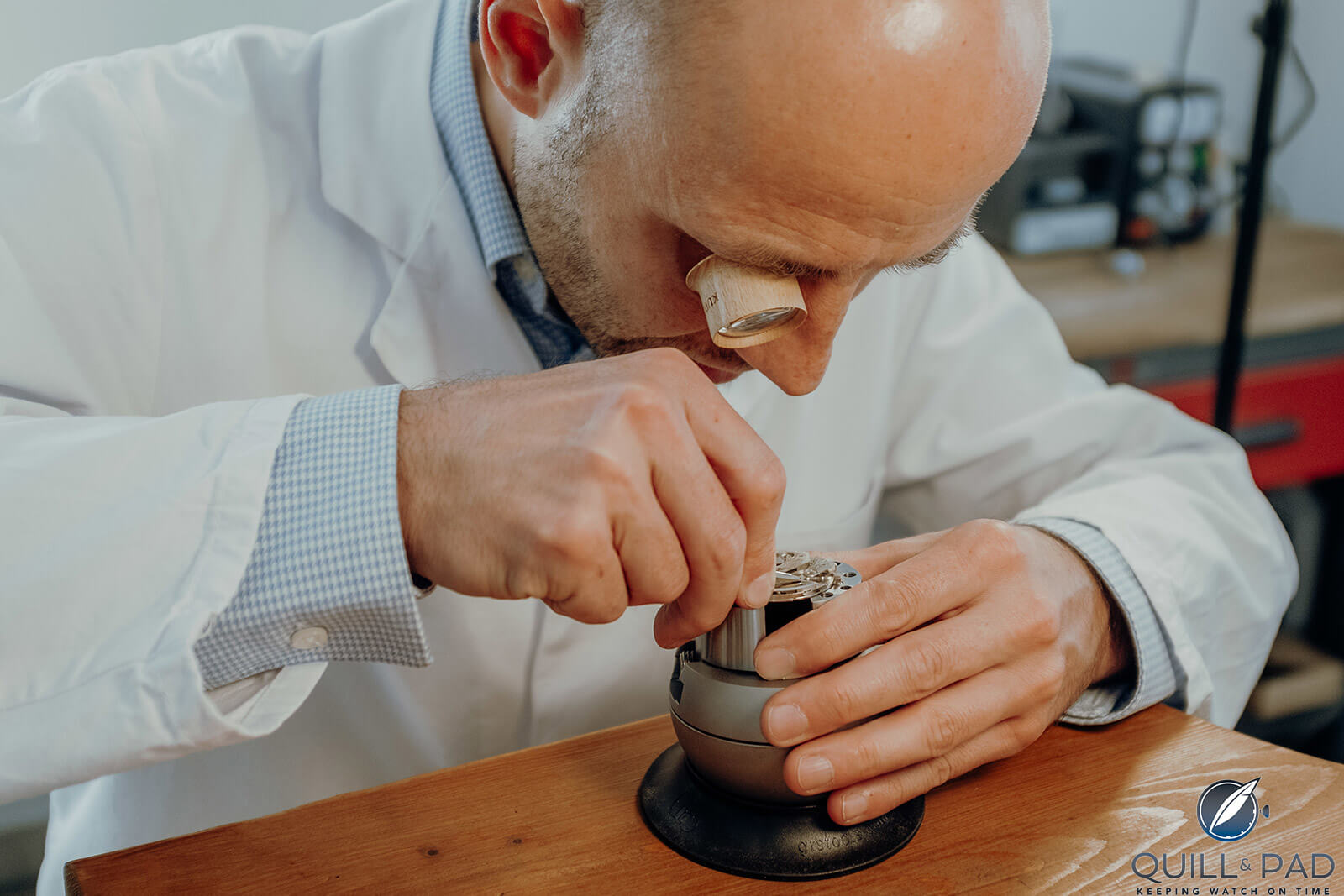 Stefan Kudoke engraving at his bench

On my Kudoke Flieger Concept, Kudoke first sawed out all the parts from the Unitas movement not necessary for the stability of the movement. This is a painstaking task accomplished with a miniature watchmaker’s saw. It is also an arduous task since the cutting is done in parallel straight lines rather than curved shapes.

Today the majority of sketetonized movement components are cut out by a machine. A machine-skeletonized movement has rounded edges since the milling cutter has round shape. When you see sharp, straight edges, it was likely done either by a watchmaker or specialist who processed the corners by hand after the machine cutout was completed.

In hand-sketetonizing, after sawing out the movement plate and bridges traces of the sawing blade are noticeable. To remove these traces, the whole movement is filed. Filing also aids in straightening the shape of the bridges and movement plate. 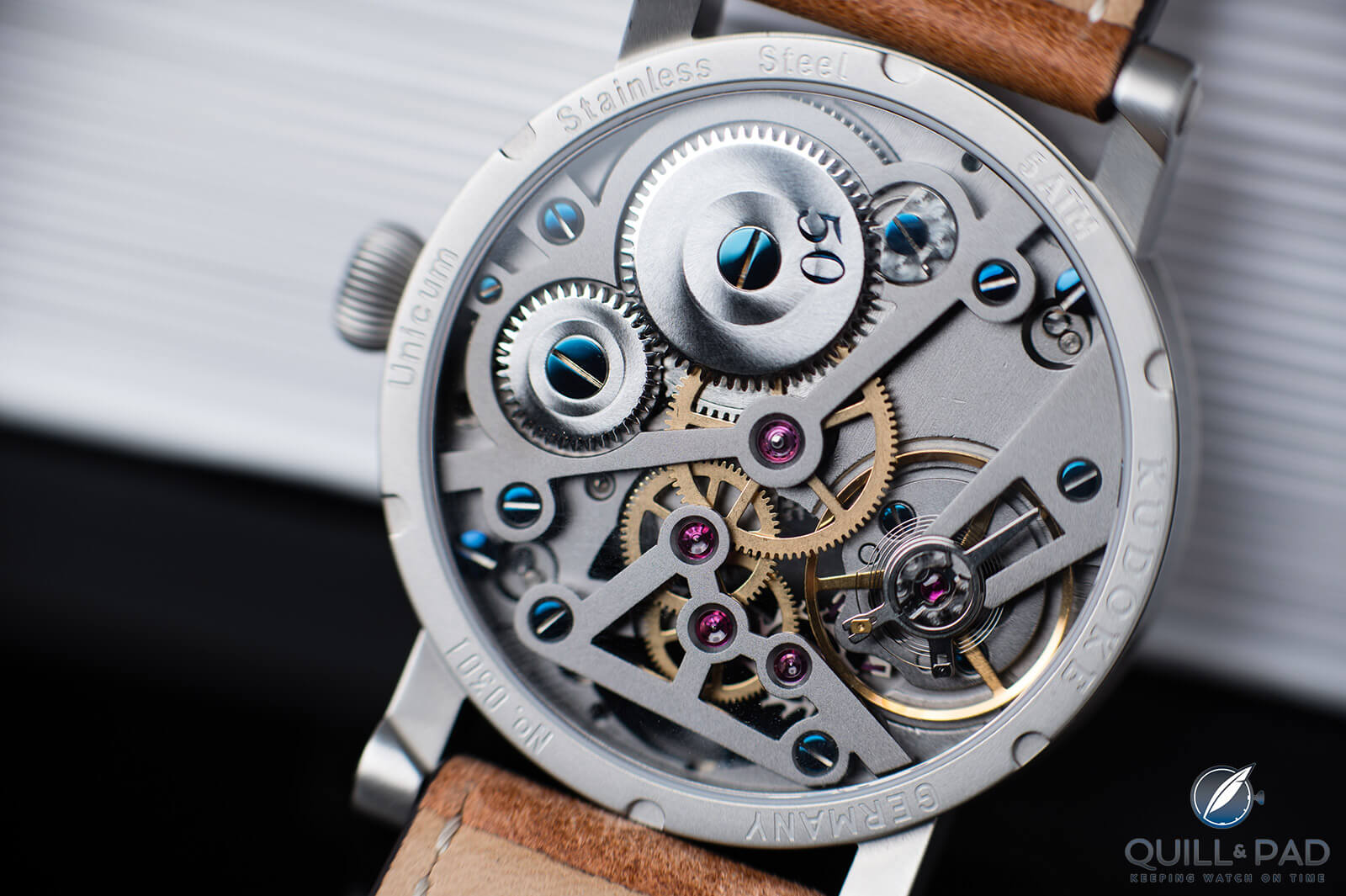 Kudoke wanted to give this flieger a bead-blasted finish as an homage to historical World War II pilot’s timepieces, so the stainless steel case received a bead-blasted treatment. Additionally, the brass movement plate and bridges were also bead blasted. After that the movement components were electroplated with black rhodium.

All the screws were thermally heated to a lovely deep blue color.

Finally, Kudoke handcrafted a double solar finish on the crown and ratchet wheels. He also reworked some of the finishing on the movement, so I took the opportunity to personalize it with a “50” engraved on the ratchet wheel in honor of my fiftieth birthday in 2020.

He hand-engraved the blue “50” on the ratchet wheel, which involved thermally heating the wheel to a perfect blue color before applying the double solar finish. 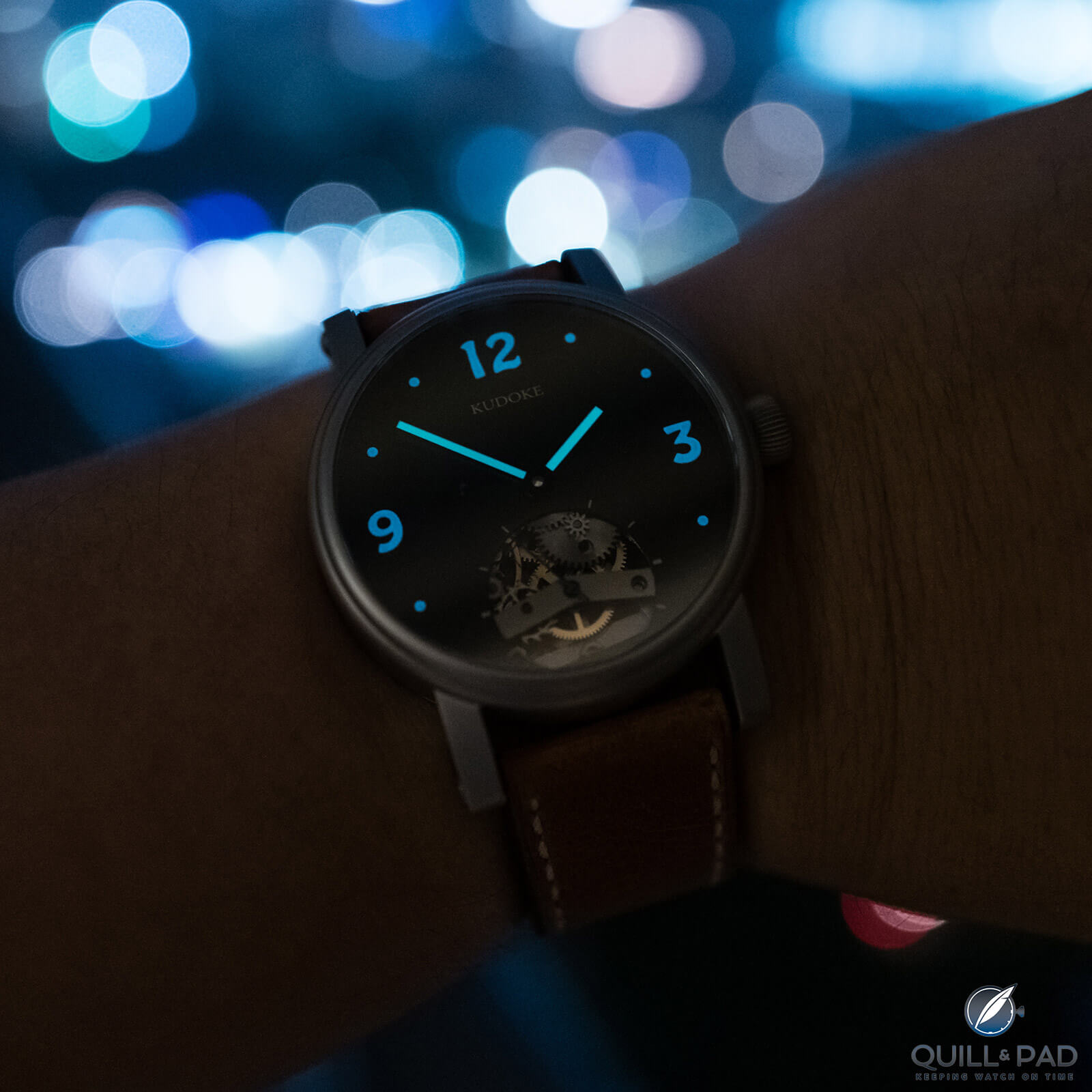 My flieger has significant wrist presence but does not weigh much due to the skeletonized movement. The vintage-style painted numbers and hands are graced with a strong blue-toned Super-LumiNova, and the skeletonized subsidiary seconds dial gives my flieger the distinct Kudoke feel.

I picked up the Kudoke Flieger Concept from Stefan and Ev Kudoke over lunch at their favorite steakhouse in Dresden. Due to the COVID-19 shutdowns and travel restrictions, that in itself required a lot of luck and perseverance.

During lunch, Stefan told me that he has not given up on the idea of a making another Kudoke flieger in the future, but with a different design and perhaps as part of the Caliber 1 series. I am confident that it will come to fruition.

Stefan Kudoke also does fully customized timepieces, which you can find out more about by visiting www.kudoke.eu.

* This article was first published on November 20, 2020 at Why I Bought It: Kudoke Flieger Concept (KFC).