As I’ve written previously here on Quill & Pad, it’s tough being an independent watchmaker. In particular, most find it difficult to increase demand for their pieces enough to drive economies of scale in production, which in turn doesn’t allow them to reduce prices enough to stimulate additional demand.

But what if, as an independent maker, you found that demand for your work far outstripped your ability to produce? It may sound like a happy problem, but it’s frustrating for both makers and would-be buyers when a tantalizing object of desire becomes simply unobtainable.

For Hajime Asaoka’s eponymous brand, the trickle of handmade pieces like the Tsunami was never going to come close to meeting requests; happily for all of us, though, there’s another way to own an Asaoka-designed watch: Kurono. 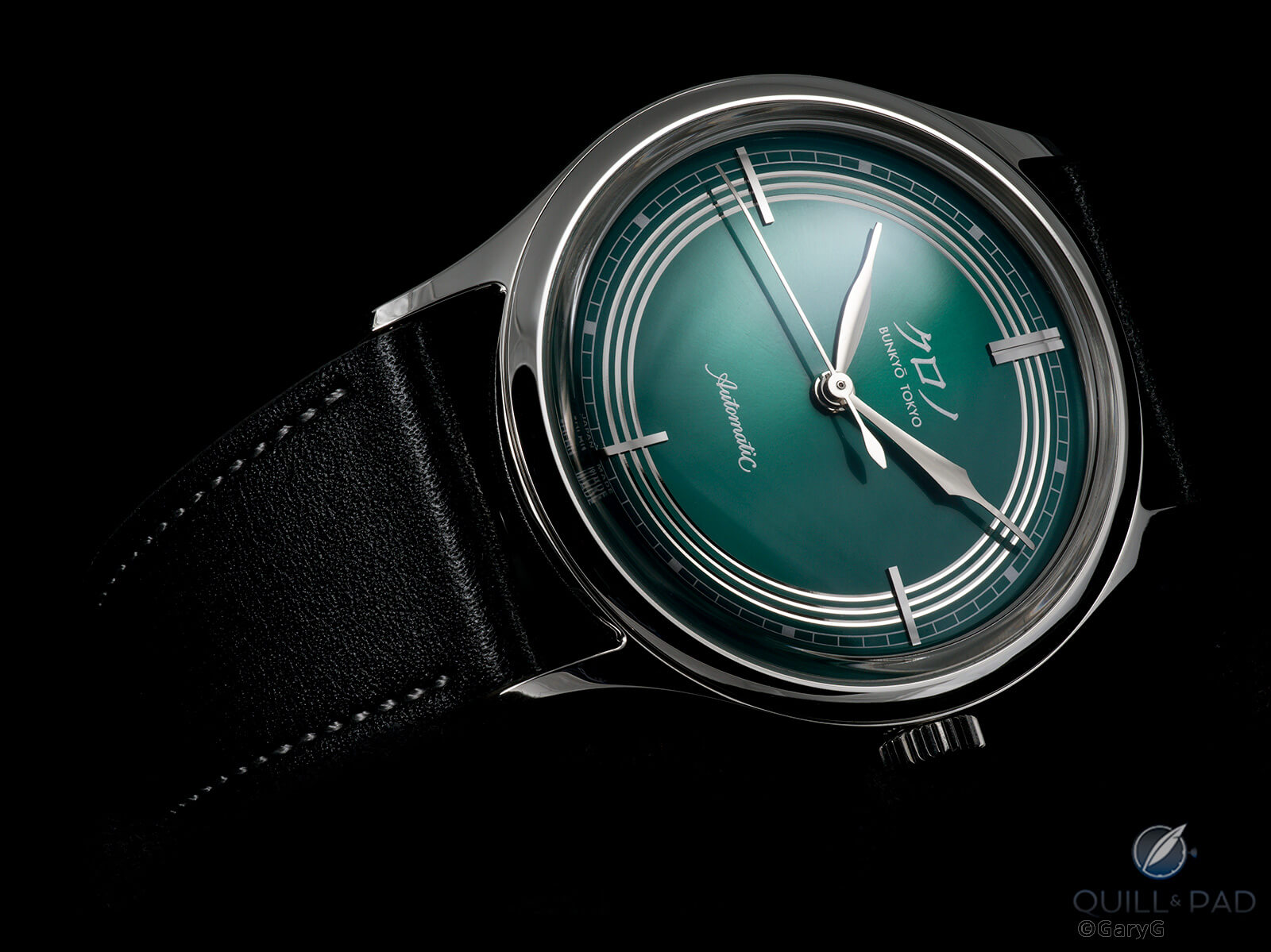 From the mind of Hajime Asaoka: Kurono Anniversary Green Mori

Clearly there are many folks who appreciate Kurono’s efforts, as two of the firm’s watches – the Anniversary Mori and Chronograph 1 – have been selected as finalists in their respective categories (Challenge and Chronograph) at the 2020 Grand Prix d’Horlogerie de Genève.

Why I bought it and how it fits

I’d become aware of Kurono in mid-2019, but it was seeing one of the watches on the wrist of a friend in Singapore during my visit there in October 2019 for the Patek Philippe Watch Art Grand Exhibition that convinced me that this was a brand I really wanted to add to my collection. While the design was clearly identifiable as coming from Asaoka, its Art Deco influences were at the same time quite different from the look of my Tsunami. 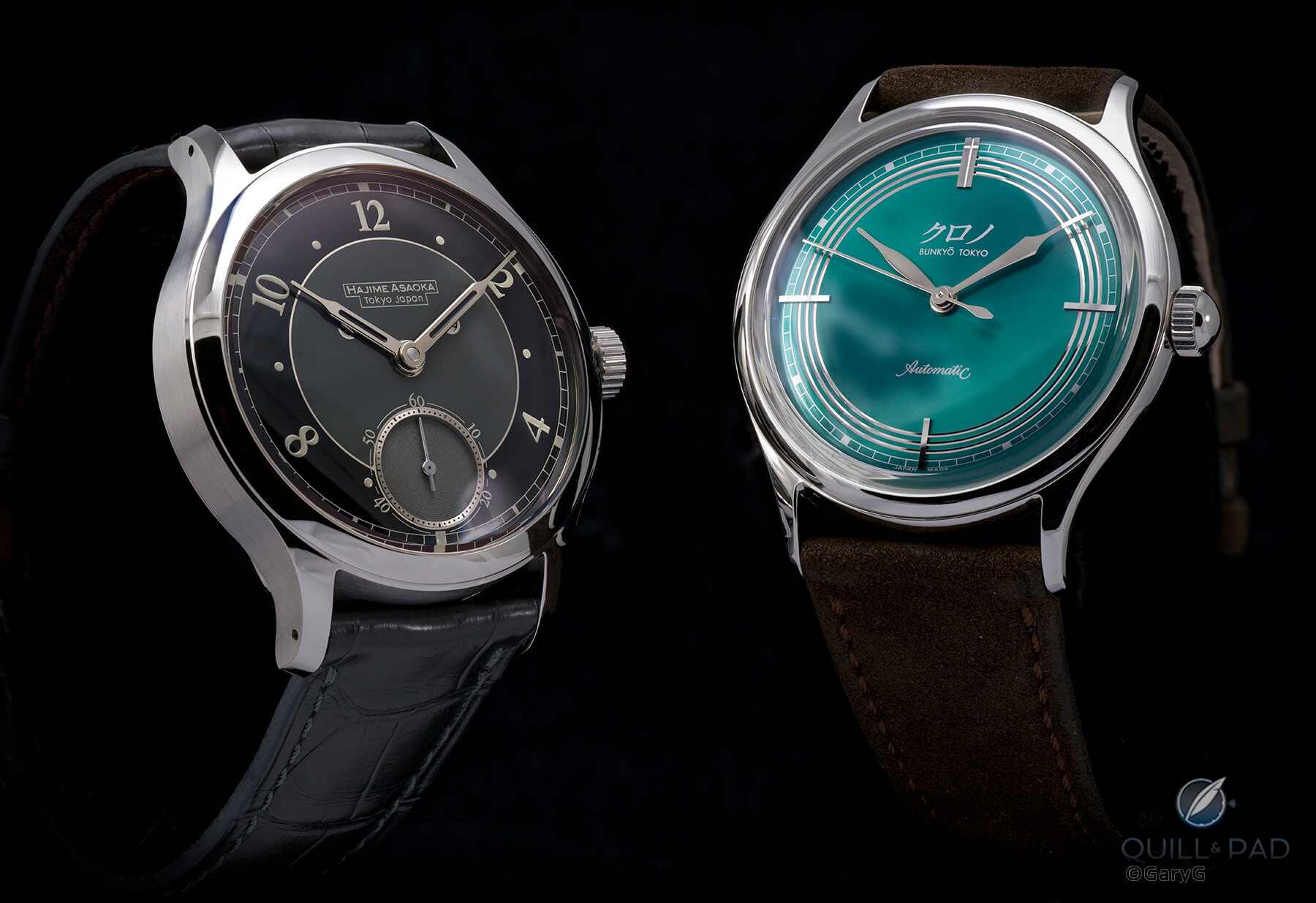 And while given its price I hadn’t been sure previously that I’d find the quality of the Kurono to my liking, I shouldn’t have worried: the build quality and crisp dial finishing seemed very much up to snuff. Finally, it seemed that every one of our respected Singaporean collector friends owned one. And at the end of the day it’s collectors who influence other collectors.

For me, the Anniversary Mori (commemorating the first anniversary of the founding of Kurono) is definitely a fun watch; but it’s also a patronage piece as it is an independent watch on its own merits: its profits enable Asaoka to continue his low-production artisan work, and its affordability serves to expand the ranks of independent collectors. 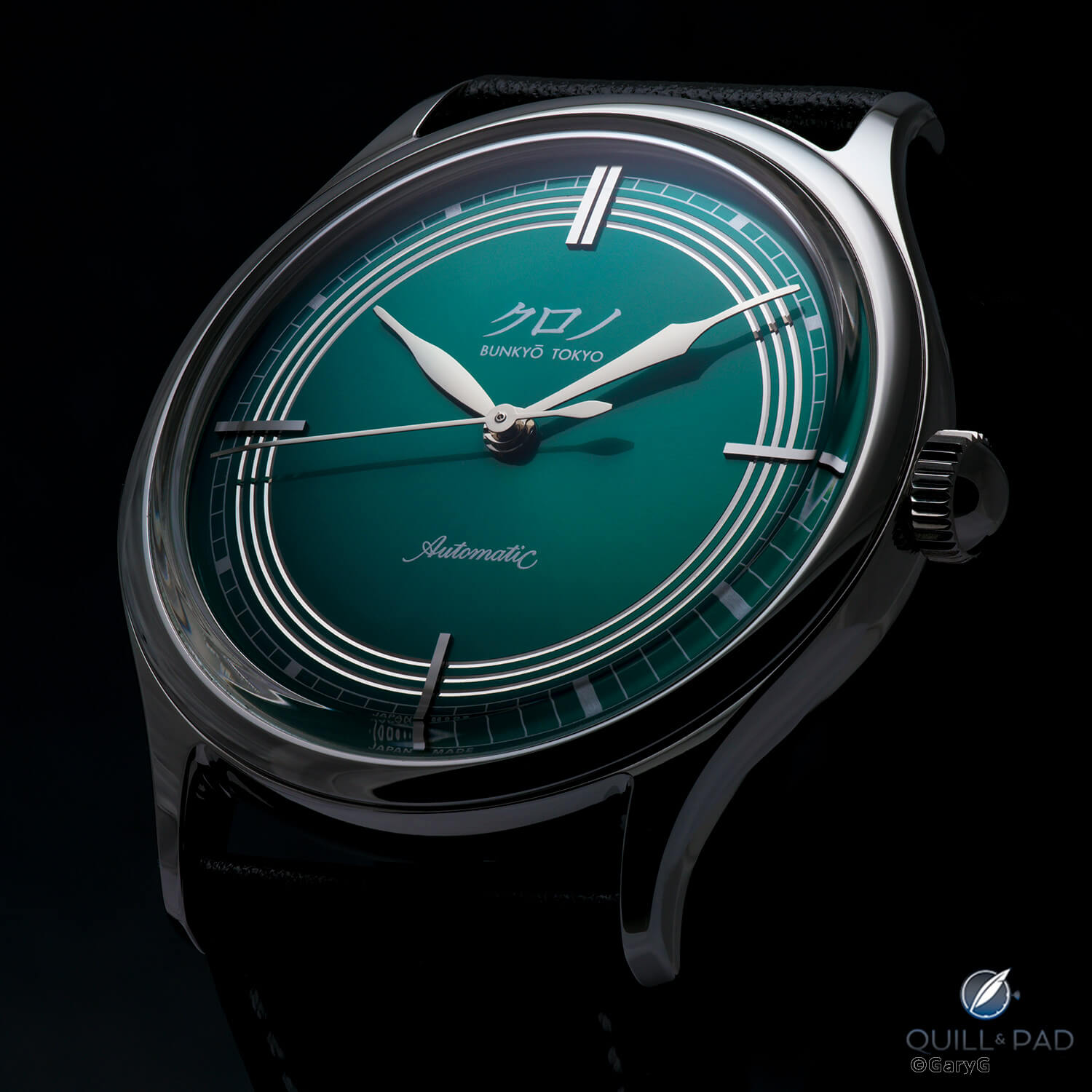 Buying and receiving the Kurono Mori

As it turns out, though, affordability and ready accessibility aren’t necessarily the same thing! The plan was to issue the Anniversary Mori in a limited set of 50 watches, and given the buzz about the watch I was one of many who signed up for accounts on the Kurono website and practiced our ordering technique in advance. On the day, however, there were glitches in the process and many people found themselves unable to order.

Within minutes, many frustrated messages reached the Kurono team and in an astonishing – and welcome – move they quickly announced that a second, time-bounded window would be provided for additional orders, ultimately resulting in a total edition size of 288 pieces.

In an additional spirit of fair play, Kurono gave the first 50 buyers the option to opt out of their purchases once the edition size had been increased. When several took them up on the option, as an established Asaoka customer I was fortunate to have my order moved up into the first set of watches to be delivered. It arrived shortly thereafter, packaged in a bright scarf and simple inner box. 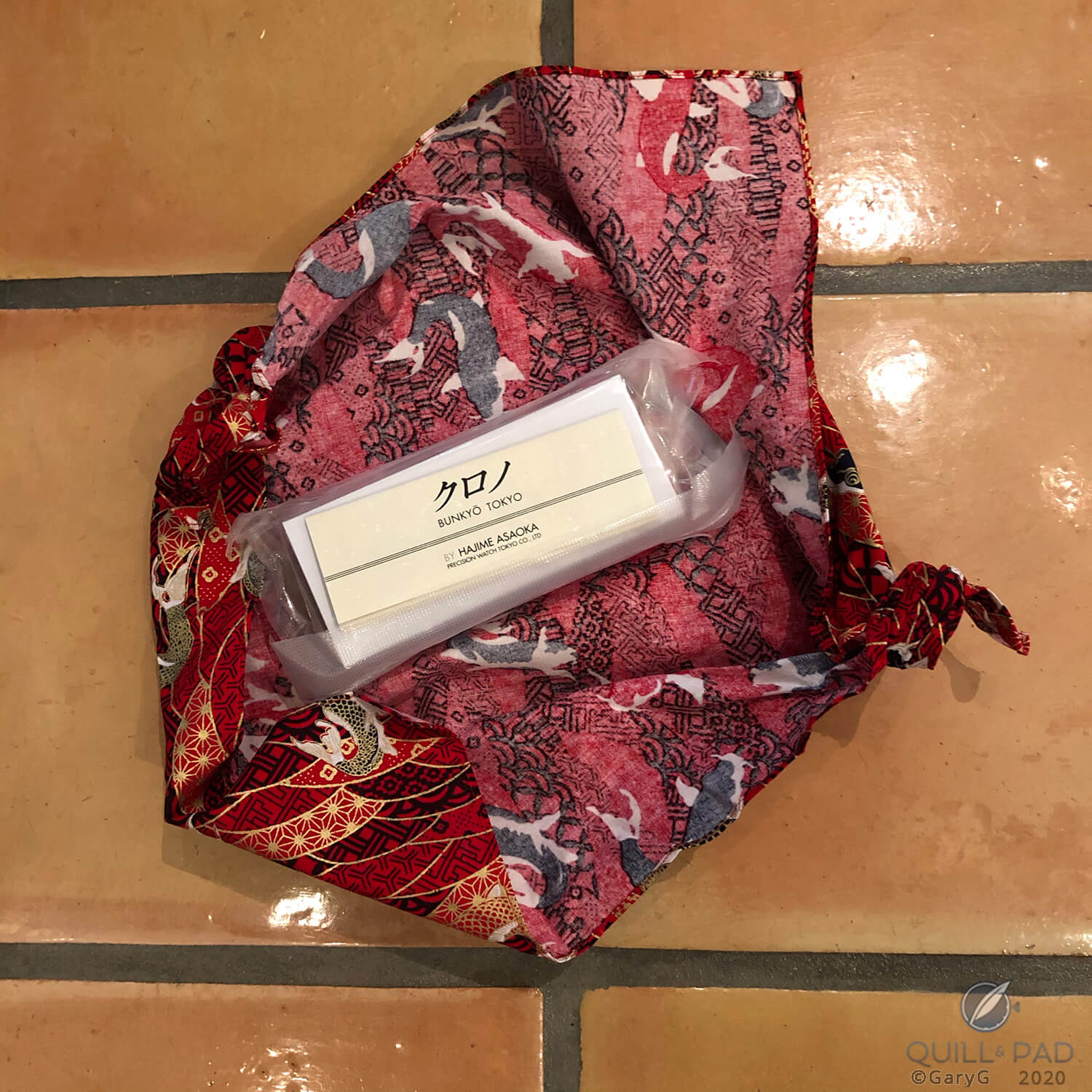 Immediately onto the wrist! Often with incoming pieces I’ll resist the temptation to wear a watch until I’ve had the chance to photograph it in pristine condition, but in the spirit of fun I chucked out the principle of restraint and slapped it right on. 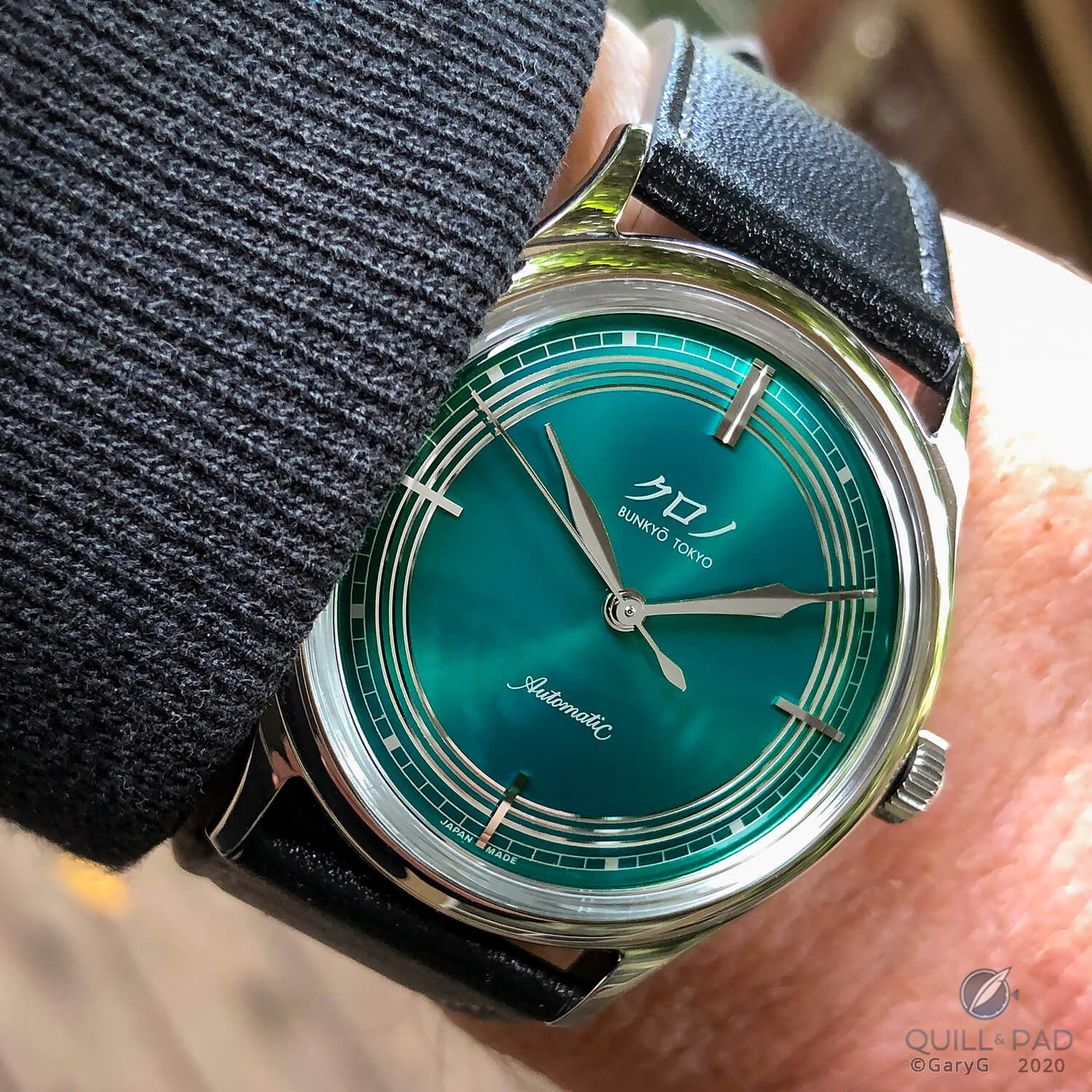 On the wrist: Anniversary Mori from Kurono by Hajime Asaoka

One reason I took immediately to the Mori is that it is a very comfortable wearer; it’s light but not overly so, and the curved integrated lugs steer the strap smoothly around the wrist.

That green dial is also a winner; I almost called it an “unusual” green dial, but it seems that green is the new whatever these days. This particular color and dial, however, have the ability to look quite different in varied light conditions, seeming to shift from forest green to aqua and back again while shimmering in the light. Closer to aqua: dial of the Anniversary Mori in direct sunlight

On the wrist and in the light tent, the etched circular grooves and applied baton markers provide flashes of light in all positions, as do the slightly domed, polished hands. Lots of visual interest: Kurono Mori in the light tent

The overall design of the watch is flowing and organic, almost calming – and a nice counterpoint to the sharper angles and flatter sides of the Tsunami. The smooth curves and circular shapes extend to the design of the screw-in solid case back, which, like the dial, bears the name Bunkyo, the neighborhood where Asaoka’s design studio is located. 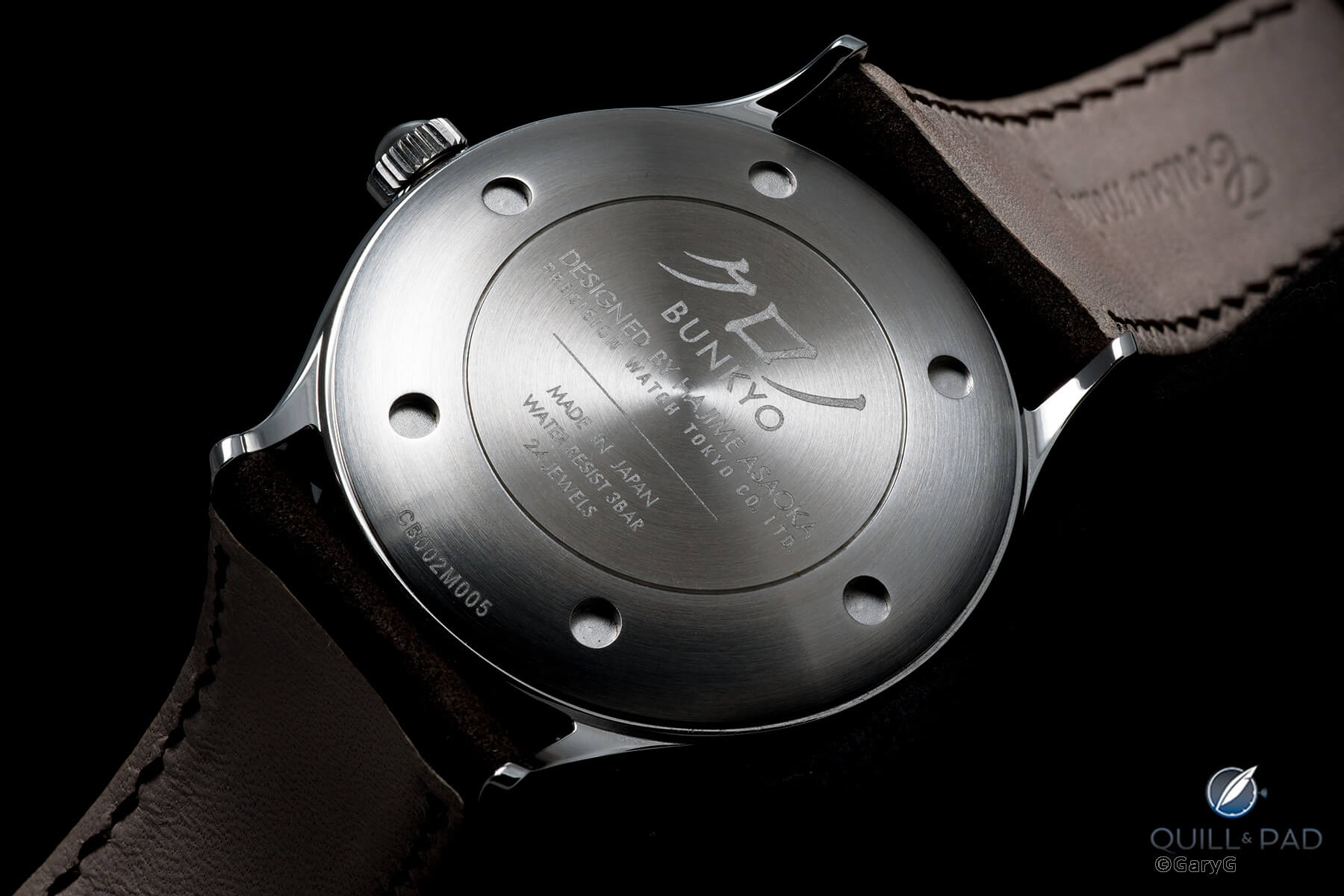 As with other solid-back watches I’ve bought over the recent years, I couldn’t resist the temptation to spin off the back using a case wrench to see the movement inside. The Miyota 90S5, from that firm’s Premium series, certainly isn’t unduly fancy but seems perfectly serviceable and even has a bit of rudimentary frosting and striping to dress it up a little. Perhaps at least as satisfying as the watch itself is the experience of dealing with the Kurono organization. In contrast to the long periods of silence associated with commissioning one of Asaoka’s bespoke pieces, I found the Kurono team to be almost instantly responsive. And as their rapid and principled response to the ordering process troubles showed, they are open to criticism and fair-minded as well.

They also know how to have fun and build community! About a month after receiving my watch, a parcel arrived unannounced from Japan bearing a Kurono t-shirt. I particularly enjoyed the cautionary inscription that accompanied the laundering instructions: “Caution: Not to be worn on the wrist.” 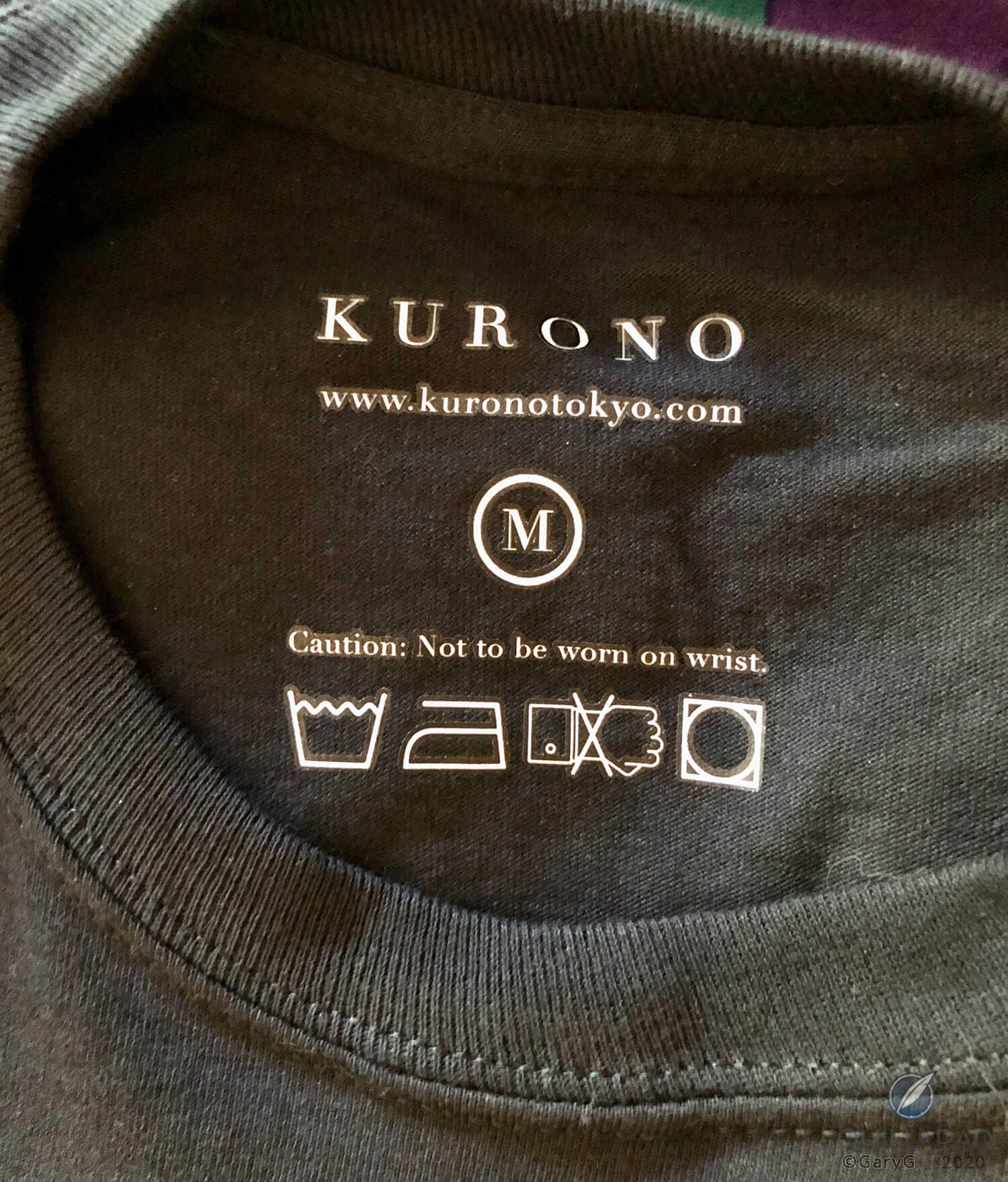 The “medium” size of the shirt I received suggests either that I look smaller in photos than I am in real life or that the Kurono team has confidence in my current weight-loss regimen. It’s pretty snug, but it does bring a big smile when I put it on, just like the watch.

The Kurono team also moved to acknowledge the many online photographs that Kurono owners have posted of their watches, incorporating them into a published book, and you can download the digital version for free. I was pleased to be asked to contribute one of my photos and am looking forward to receiving my hard-copy edition.

There is no such thing as a perfect watch! From an aesthetic perspective, the one thing that I thought detracted from the watch was the strap, a pebble-grained black affair that is labeled as calfskin – and I’m sure that it is, but if you’d told me it was polyethylene I wouldn’t have argued with that, either. I finally swapped it out for a brown suede strap in the right size that came with an auction watch I bought a few years ago, and I’m much happier now.

And from a legibility perspective and as a photographer, I’d love it if the hour and minute hands were a bit more domed as it would help them to stand out against the green background more distinctly and they would be easier to capture in photos without being blown out. I was fortunate in the photo below to get the angle and lighting right, but it wasn’t that simple. Dial side of the Kurono Mori showing slightly domed hands

As for the marketing practice of announcing highly limited runs of new watches to be on sale online at a specific hour, I’ll have to ponder that more deeply. For better or worse, it seems to be commonplace – and effective – these days.

And while I’m no fan of what I’ll call manufactured scarcity I’m all for the survival of small independents who make quality products, so I’m a bit of two minds. In Kurono’s specific case, I do have to tip my hat to the team for moving rapidly to accept a five-fold increase in orders for the Mori when complaints about fairness in the ordering process were made.

Is a Kurono Mori right for you?

The 288 examples of this particular reference were sold out on the day of issue, but there will be other Kurono watches in the future, I’m sure including simple pieces like the Mori as well as more complicated watches. You might want to seriously consider sitting by your computer with your finger poised over the “buy now” button if: 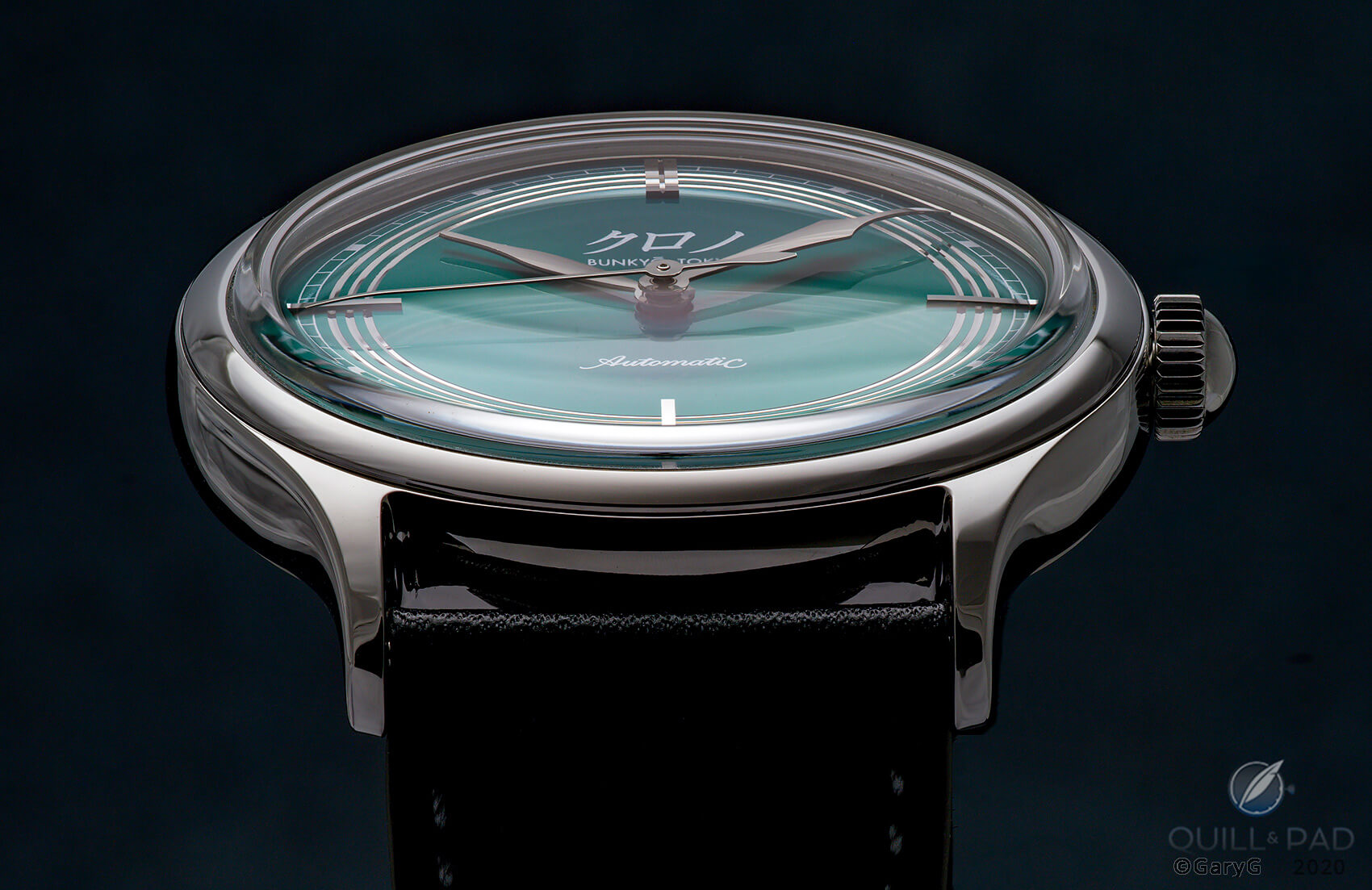 An opportunity to join the indie movement: Kurono Anniversary Mori

On the other hand, you might choose to prioritize other opportunities if:

That last point did weigh on me somewhat as I prepared to order the Mori; and I’ll confess that it came as a relief when the order books were opened up to all comers and I didn’t feel that for me to have the watch, someone else needed to lose his or her chance. I’ll look forward to your thoughts on Kurono, and on other value-for-money independent watches, in the comments below. In the meantime, happy hunting and happy wearing.

* This article was first published on September 25, 2020 at Why I Bought It: Kurono By Hajime Asaoka Anniversary Green Mori – Good News, It‘s Relatively Affordable; Bad News, It’s Hard To Get

Why I Bought It: Hajime Asaoka Tsunami