Deciding to buy the Omega Seamaster Aqua Terra wasn’t exactly a no-brainer (my favorite kind of brainer). Here’s why I bought this timepiece and how I feel about it after a year. 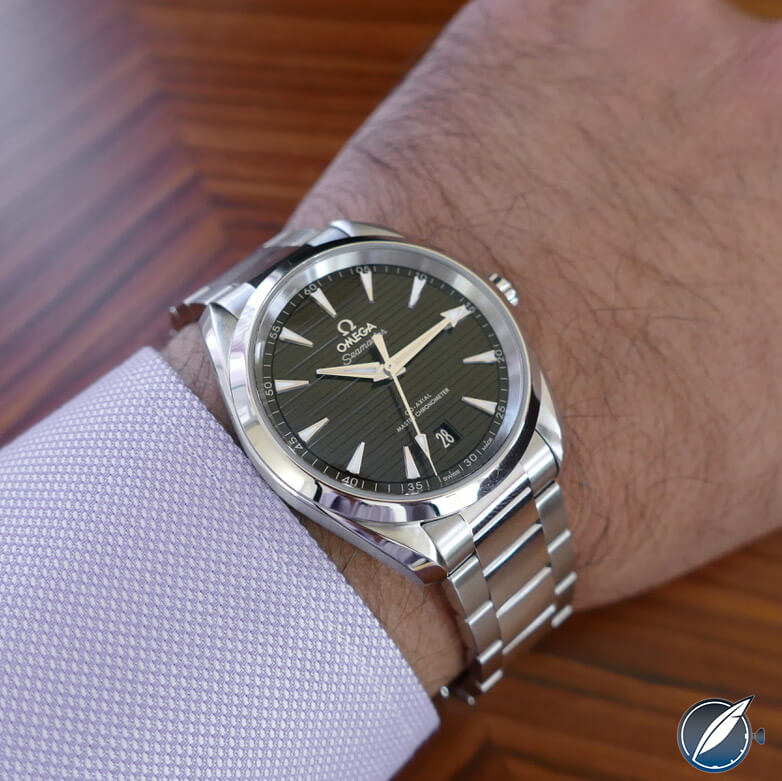 The author’s Omega Seamaster Aqua Terra 150M on his wrist

Before we take a look at the Omega Seamaster Aqua Terra in further detail, though, I would like to introduce you to the field of semiotics.

Of form and function

I do not envy you if you have ever had the misfortune of being invited to dinner at a semiologist’s house. You have earned my deepest sympathies.

You will likely be treated to a conversation drier than the fish you are served and, at some point, it will turn to decorative veils.

The decorative veil isn’t headdress but the space existing between an object’s function and its design. Extensive analysis leading to complex theoretical explanations exist, apparently.

This space, this decorative veil, encourages debate around an object’s nature and its meaning. A example of this is the Alessi Juicy Salif by Philippe Starck. 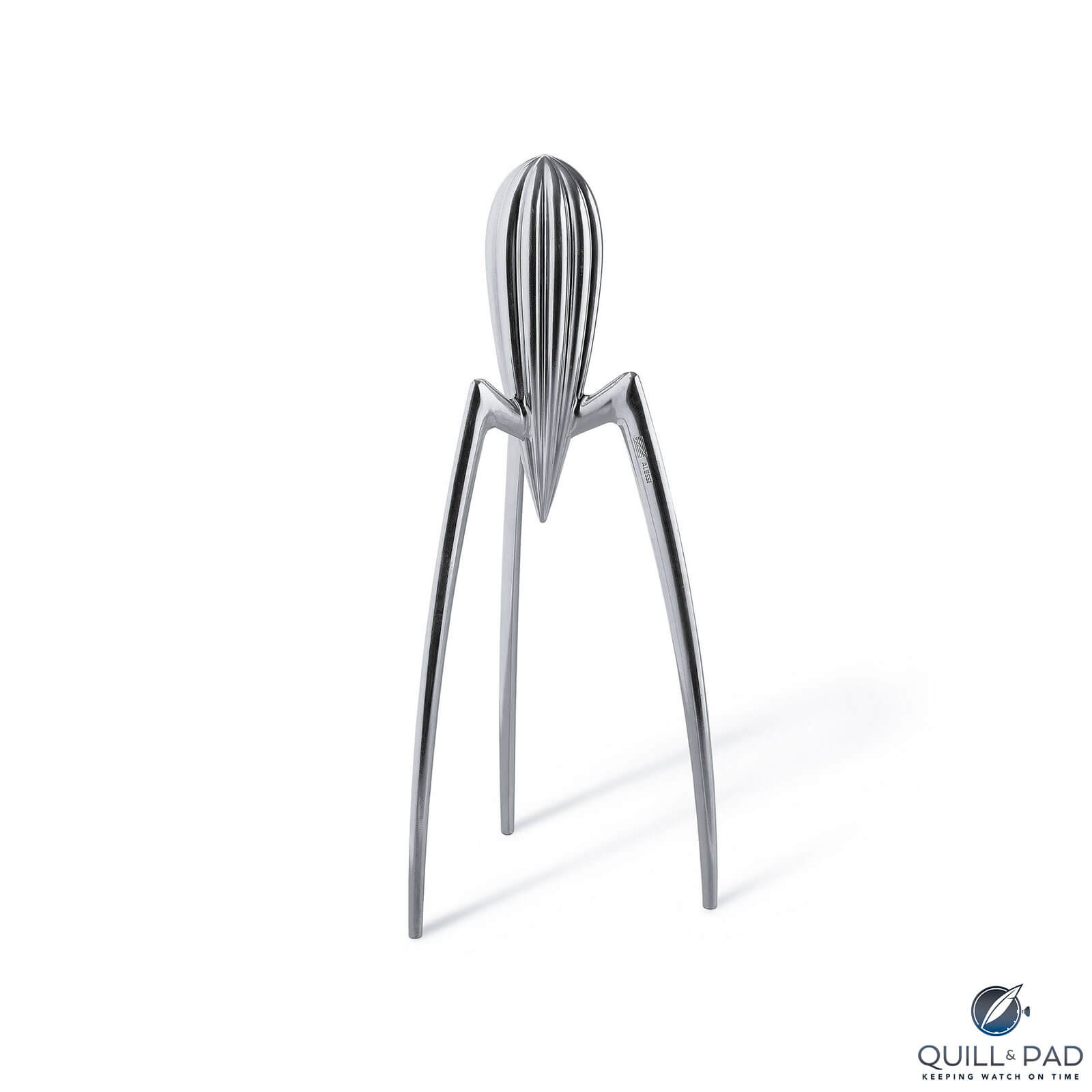 Alessi has produced and has sold around a million Juicy Salifs, yet the device is practically useless at juicing oranges and lemons.

French anthropologist André Leroy-Gourham believes the notion of functional approximation to be crucial in offering a reason for an object’s existence, and that there has always been freedom in the interpretation of the relationship between form and function.

Our fascination with watches has very little to do with the study or understanding of time itself. Watches are instruments that measure time and are usually designed to reflect that; however, the desire for watch designers to push the decorative veil leads to a wide variability in legibility.

Does the Omega Seamaster Aqua Terra, a watch marketed to be worn on a yacht or while playing water sports, drape a decorative veil over its wearer’s wrist or can it actually juice a lemon?

After a year of owning mine, I am happy to report that it can.

Launched by Omega in 2002, it is a good-looking, casual sports watch featuring George Daniels’ co-axial escapement, which was industrialized by Omega and integrated into Swatch Group ETA-produced Omega calibers in the 1990s.

Omega believed in the co-axial and developed the technology for use in robust in-house calibers. A sports watch is the perfect proving ground, and the Aqua Terra was one of the models to benefit from the brand’s technological progress.

The first watches were modern but inspired by past designs. Long, twisted lugs and arrowhead hands came to define the look of the Aqua Terra collection, which was an aquatic-themed watch equally comfortable on land.

As the movements were upgraded to in-house calibers dial patterns became more elaborate, with the most important style update coming with the “teak-pattern” dials. These were embossed with slim, longitudinal lines evoking the teak decks of luxury yachts that came to define the look of the Aqua Terra collection.

The movement grew in thickness and diameter as did the cases. The co-axial calibers were not without issues, and with each update to their reliability came a slight styling change to mark the progress: date window frames were discarded in favor of unadorned cutouts, center links were polished, and finishing improvements were offered.

The dawn of the Master Chronometer certification from the Swiss Federal Institute of Metrology heralded a redesign unveiled at Baselworld 2017, bringing with it a reimagining of the Seamaster Aqua Terra’s look.

Until that point my interest in the watch was lukewarm; however the technology, new design, and finish raised my thermostat past tropical. 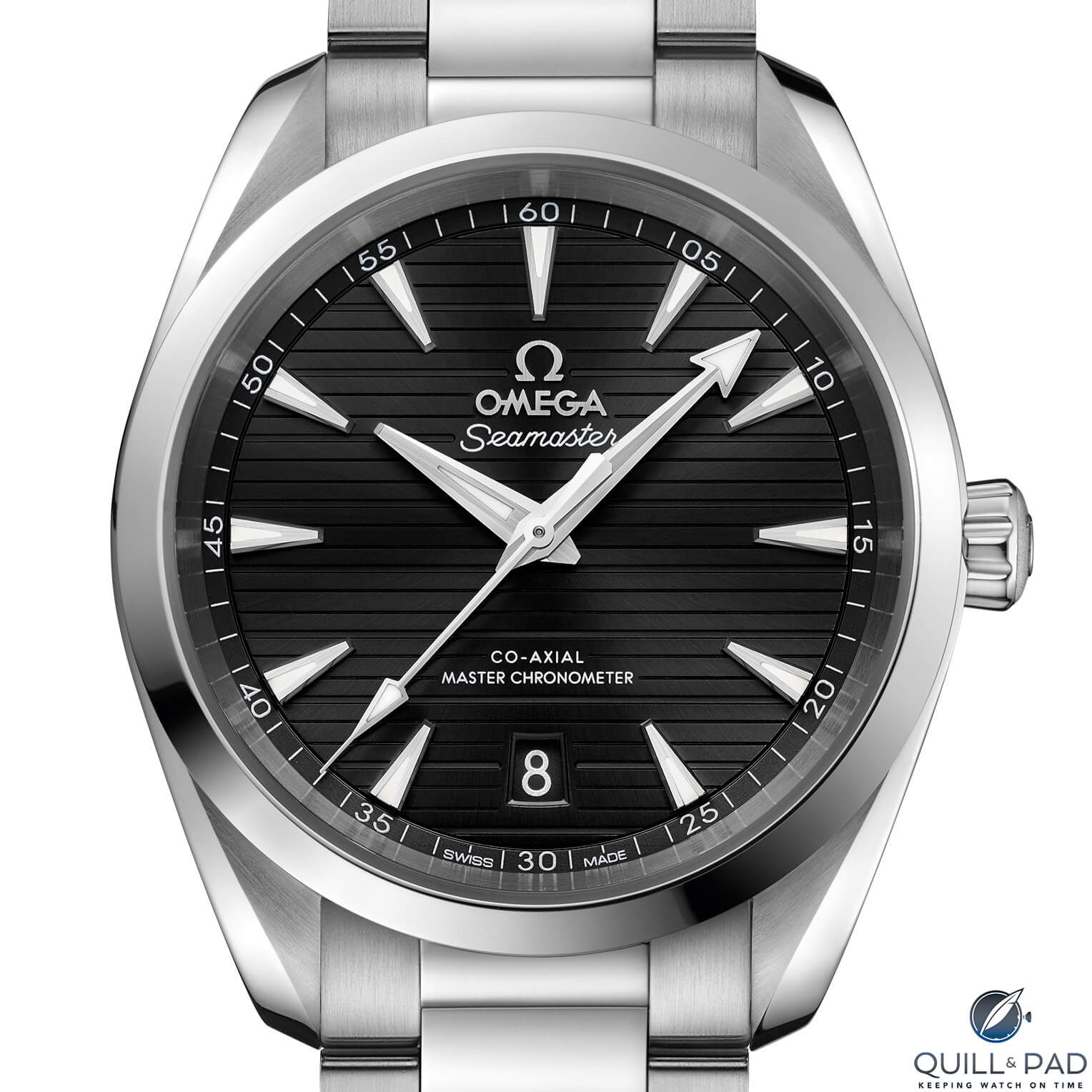 The hands and indices are Super-LumiNova filled, while the metallic dial reflects off the sides of each like a distant mirage.

The dial imparts a calmness to the Aqua Terra not present in previous models that I ascribe to the horizontal lines on the dial.

The calmness, a feeling of being grounded, is enhanced by the gently domed sapphire crystal held in place by a highly polished conical bezel. The dial’s applied Omega logo, vertically brushed on top and polished along the sides, sits proudly below the single 12 o’clock hour index (a double index would have been delightful here in my opinion).

Dial text is surprisingly terse, reduced to announcing it’s a Seamaster with a technically advanced co-axial escapement and Master Chronometer certification. At 6 o’clock is a well-executed precision-cut date window with bevels extending all the way down to the date disk. And I’m particularly pleased that the date disk matches the color of the dial.

Although slim, the date (in Futura font like the minute numerals) is highly legible.

The dial’s “teak deck” pattern consists of “planks” with shallow spacing between each and a wider furrow between every three. This both generates interesting and deep shadows and creates margins for visual mass to decentralize and expand outward, creating the impression of a larger dial. This rhythm allows the dial to be enjoyed like a lyric rather than mere graphic field.

The hands are a wonderfully multifaceted affair.

The long and thin second hand, bisected and polished with a spearhead lume plot, reaches comfortably into the minute track markings. The pentagonal counterbalance is the same length as the spearhead.

The minute hand contains three surfaces with the leading and trailing edges polished and a plateaued central column brushed along its length. Ditto the hour hand.

The minute hand boasts an arrowhead at its tip, broad and squat, and entirely filled with lume. The lume on the hour hand is within its central body.

The shape of the hands is dauphine in concept but freshened to reflect the watch’s modern sporting credentials and production techniques. The breadth of the hour hand’s terminal is the same as that of the hour indices.

The case accommodates the current Omega co-axial architecture without too much paunch, while clever design makes it appear slimmer than it is.

The slab sides of the case are horizontally brushed in a coarse grain, smooth to the touch but rough in appearance, which gives it a very living feel, almost like wood, and provides texture you can feel with a fingertip. The case features Omega’s lyre lugs, which, true to the namesake instrument, compose organic curves framing the case.

The lugs are polished on top with circular brushing angled toward the bracelet. All the surface changes are crisp, and all the lines generate visual tension. This is finely detailed design work deserving full appreciation.

The same circular brushing continues on the underside of the lugs and case, and a thick, wave-pattern motif with alternating brushed and polished surfaces surrounds a case back set with a generous sapphire crystal. The bezel of the screw-in case back announces the model name and water resistance. 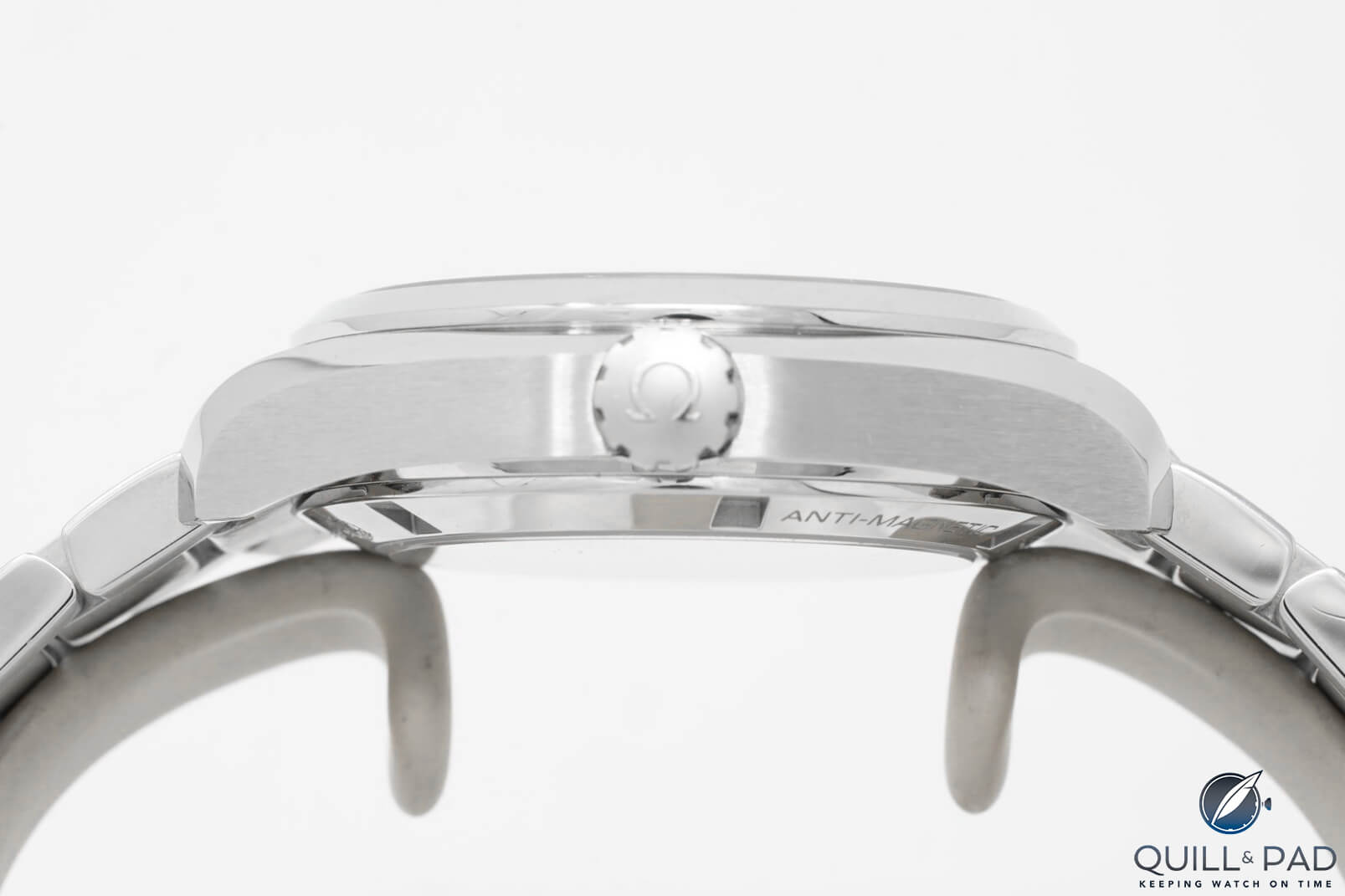 The generously-sized conical/pear-shaped crown is fully polished except for its finial, which contains a polished Omega signature relieved on a blasted finish convex field. The crown’s knurled grip alludes to an abstract helm, a detail becoming more apparent in use. The crown screws into a slight recess in the case side so it both looks and wears smaller than it is.

The bracelet links attach to the case with end links sitting flush with the case band, cascading out in staggered three-link formation. The center links and side surfaces are polished while everything else is vertically brushed. 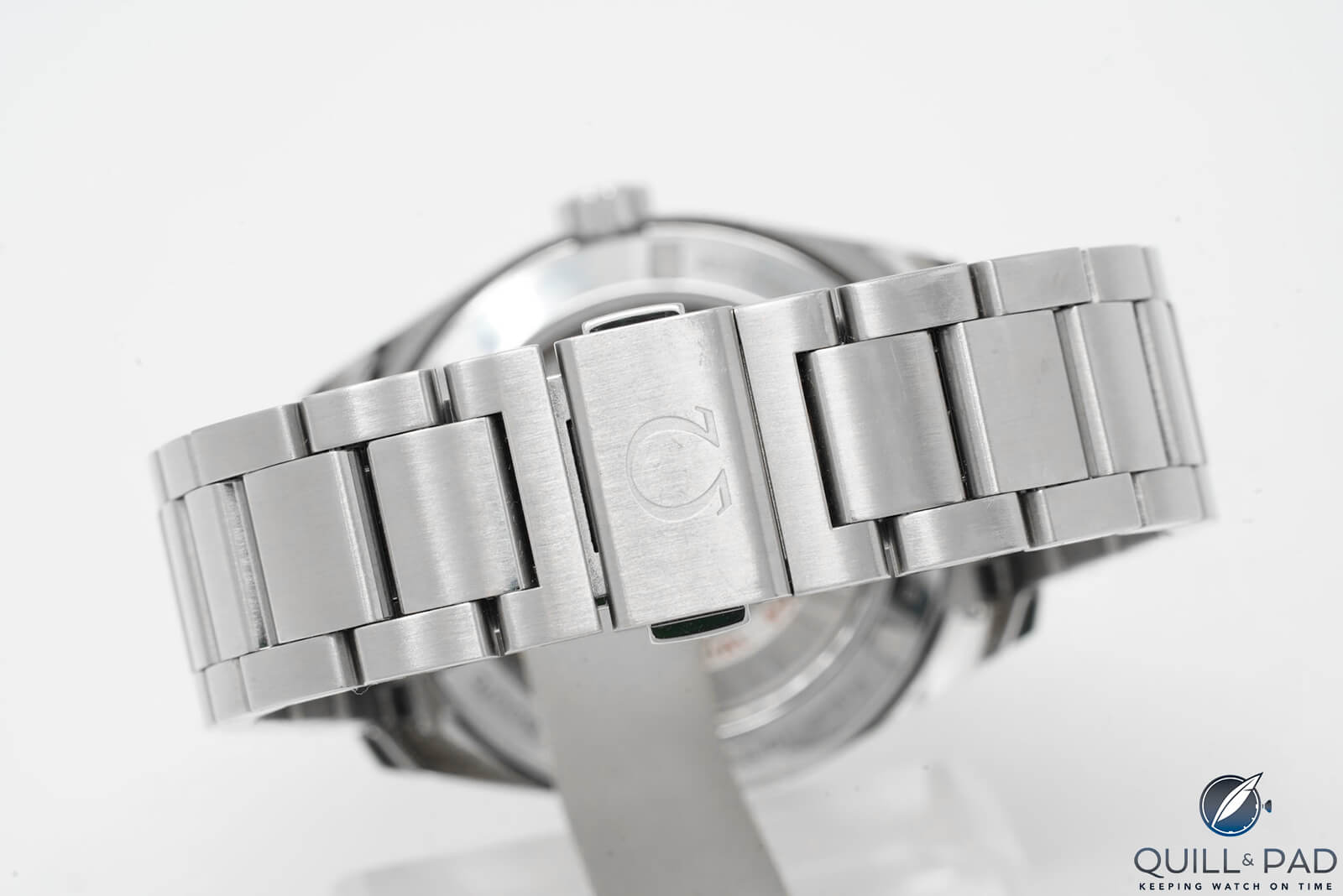 The clasp is a sequential folding dual arc with push-button actuators for release. There is an engraved Omega logo on the brushed clasp, and the underside architecture of the rocker arms is polished and curved for ergonomic comfort and operation.

I tend to err toward the toolish-end of the luxury watch spectrum. I appreciate these watches’ no-nonsense approach to time telling and their come-what-may attitude to timekeeping. No decorative veil for me.

The technical merits and aesthetic virtues come together in a harmonious package that is much more than the sum of its parts.

Omega Seamaster Aqua Terra 150M: why I bought one

The question when considering to buy was what would a watch designed for life on the high seas and dinners at yacht clubs do for me? The closest I ever got to a yacht was owning a pair of Sperry boat shoes, and I imagined it would be dishonest of my wristwatch to proclaim Seamaster when I didn’t even live near a pool.

Aqua was in the name, but so was Terra. And while The World Is Not Enough for James Bond, I thought that the Aqua Terra might be enough for me. And after all, Bond made do with one (see Commemorating 56 Years Of Bond, James Bond: A Complete Rundown Of Watches Worn On Screen By The World’s Most Famous Fictional Spy and The On- And Off-Screen Watches Of Brosnan, Pierce Brosnan).

I took the plunge. The Seamaster Aqua Terra 150M was a birthday present to myself: a wristwatch that wouldn’t necessarily be precious but a robust, well-made, legible, and water-resistant daily companion.

The broad case band, horizontally brushed, hinted at the sporting aspirations of the watch, but the polished sections in the now-shortened lugs and bracelet center links imparted slightly dressier pretensions, softening its image without damaging its character. I didn’t mind.

Being highly reflective, the hands and indices motivated me to select a black dial, which would absorb some of the light, leaving the fireworks to the rest of the hardware. In bright light, the black dial appears iridescent due to its metallic sunburst pattern.

The case back design ensures that the watch sits slightly proud on the wrist, leaving the lugs never quite in contact with skin. When they do touch, there is the polished bevel waiting. 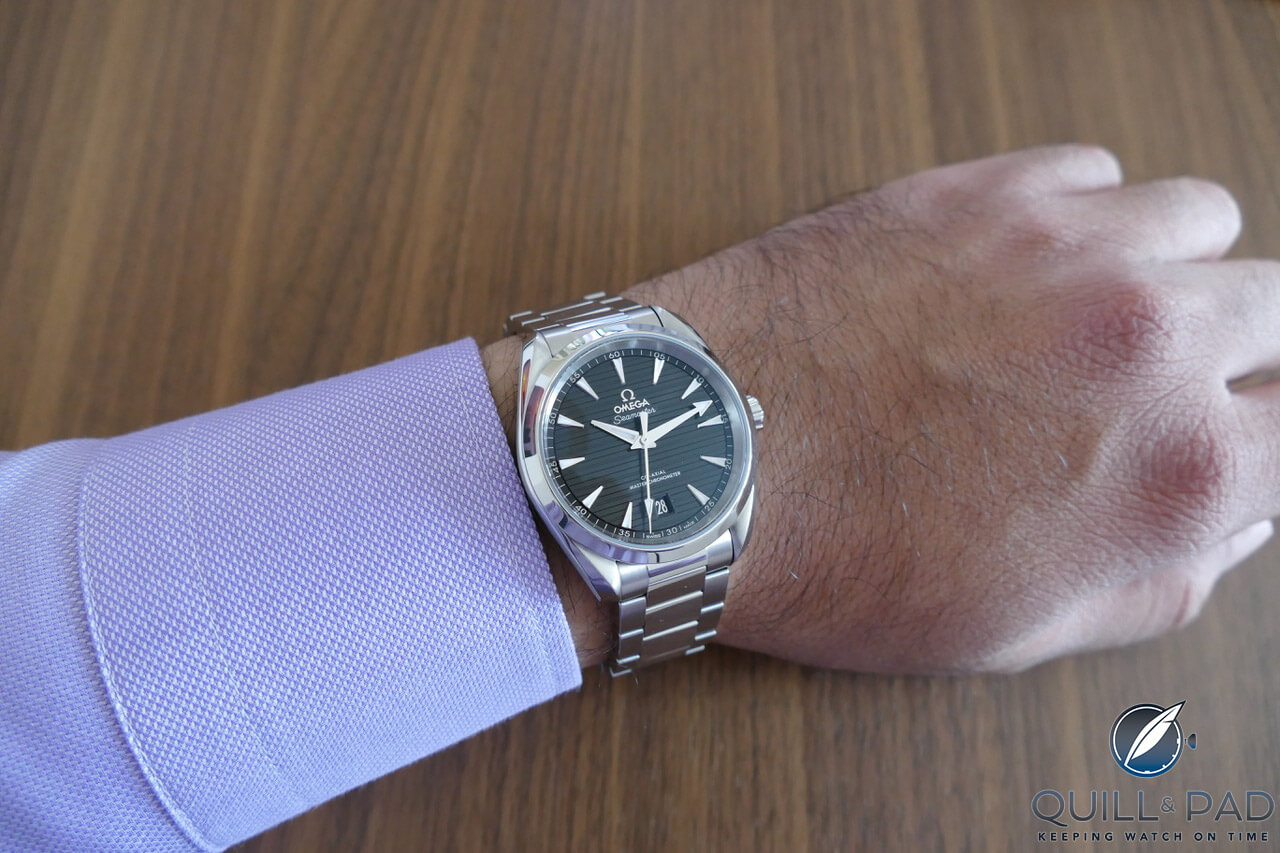 The author’s Omega Seamaster Aqua Terra 150M on his wrist

At 38 mm in diameter, the watch sits nicely on my wrist, projecting an image of classic proportions. It is an image I can’t shake. In the 12 months I’ve had the watch it has never faltered, always keeping time well within its chronometer-rated promise, aided by the free-sprung silicon balance that makes a magnetized balance spring a worry of the past.

I have taken my Seamaster Aqua Terra to the end of the world, a dinner at a yacht club (yes, really), on the open road, and on the open sea. The brushed finish has held up well, if not exceptionally well. The polished bezel has scars from doing battle against train commuters and car doors. The clasp has scraped against my keyboard more times than I care to admit, however the watch still looks remarkably good.

Most importantly, legibility and comfort throughout all of this has remained excellent. The luminescent hands are bright and blue when the theater lights dim, instantly and distinctly revealing themselves throughout the night.

The arrowhead minute hand makes it easy to read the time precisely and without effort. The crown’s operation is incredibly smooth and precise with a good amount of feel in the fingertips while being sturdy, well-weighed, and responsive when changing the date or adjusting the time. 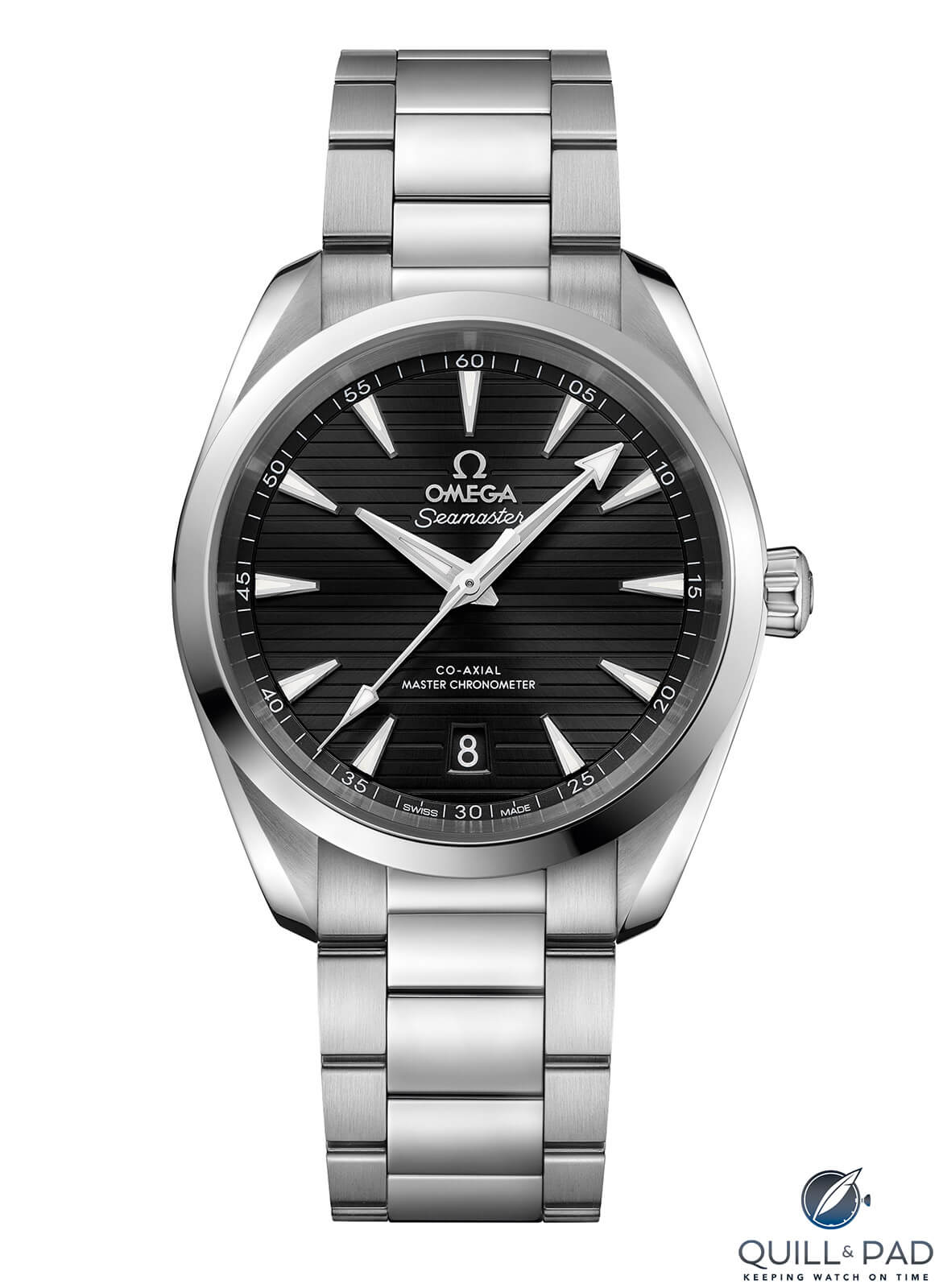 The Omega Seamaster Aqua Terra is a wonderfully composed sports watch with luxury appeal that carries itself just that little bit better than this wearer ever could.

The black dial suits most occasions, the brushed and polished finish goes with everything, and I would happily buy a Seamaster Aqua Terra again, decorative veil be damned.

* This story was first published on September 17, 2019 at Why I Bought It: Omega Seamaster Aqua Terra 150M.

Wrist Watching: The Potentially New Omega Seamaster On The Wrist Of Daniel Craig’s 007 In The As Yet Untitled ‘Bond 25’

Commemorating 56 Years Of Bond, James Bond: A Complete Rundown Of Watches Worn On Screen By The World’s Most Famous Fictional Spy

Tags: a dinner at a yacht clubCollectors and CollectingHighlightsNewsOmega
ShareTweetShare