Halloween, a word contracted from “All Hallow’s Eve,” is a predominately American celebration whose traditions originated in the late nineteenth century via its Celtic origins – mainly through large amounts of Irish and Scottish immigrants to the New World.

While All Hallow’s Eve was originally – and in many countries still is – a time to celebrate saints and departed souls, the commercialized American version mutated into a festival of gruesome beauty thanks to the use and evolution of some of the original symbols like the Jack O’Lanterns (now carved pumpkins), which were formerly carried to frighten off evil spirits and light the way at the same time.

Trick-or-treating, where children dress in costume and go from house to house begging for candy and treats, finds its origin in Celtic “guising.”

While skulls have constituted a visual theme in the world of haute horlogerie in the last few years – mainly thanks to carryovers from the fashion industry – very little else resembling horror has found its way into or onto timepieces.

And then along came a mechanical, time-telling spider: the MB&F Arachnophobia – a realistic-looking arachnid made of metal and other materials traditionally used in watchmaking. Look upon it if you dare! 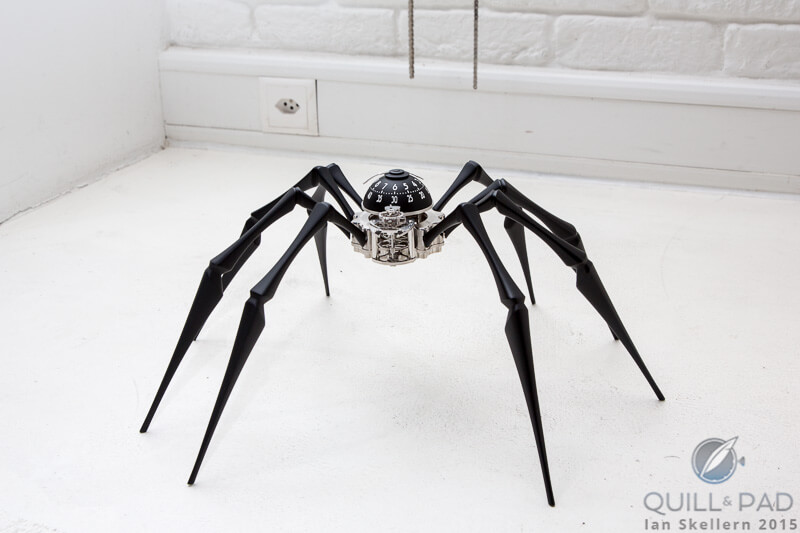 MB&F Arachnophobia: look out, it’s scuttling to a dark corner near you!

* This article was first published on October 31, 2015 at Halloween Heartbeat: MB&F Arachnophobia.

Lighting Up With Lume At Baselworld 2015. Warning: Sunglasses Advised!

Zenith Defy Skyline: How To Kill Two Birds With One Watch