Zenith Defy Skyline: How To Kill Two Birds With One Watch

“Kill two birds with one stone” is an interesting idiom since it clearly comes from a very old source at a time before modern hunting techniques. The phrase is commonly understood to highlight the idea of solving two problems with one solution – and by extension to demonstrate the cleverness and efficiency of the problem solver. The earliest known direct use was by Thomas Hobbes in 1656  but he used it to demonstrate the opposite of its generally understood meaning. An earlier iteration was found in 1546 when John Heywood penned the phrase, “I will learne to stop two gaps with one bush,” showcasing how the idea was already in general use.

The concept may well have originated in the Greek myth of Icarus, the youth famous for flying too close to the sun, when his father, Daedalus, killed two birds with one stone to take their wings and provide an escape route for his son and himself from the island of Crete. The story doesn’t seem to align as well with the concept at hand, but does illustrate the idea of understanding that killing two birds with one stone would show skill and cleverness. That would make sense as the sling, a weapon used to hurl stones in hunting and combat, had been in use for thousands of years, possibly dating back to the upper Paleolithic era.

It’s possible that the idea could be almost intrinsic to humanity’s development, a part of our understanding of intelligence and problem solving that has stayed around through the evolution of new languages and civilizations. As someone who works in product development, I am very used to using the phrase when trying to add features that solve multiple design requirements; it has always been shorthand for engineering in functional overlap to minimize the number of parts, features, and especially moving components or expensive, sourced parts.

While that is always important to consider when designing products, it is just as important to remember the concept for broader business reasons because cost and manpower are always limiting factors. As such, using your resources wisely to solve more than one organizational goal with a single action or product is definitely ideal. 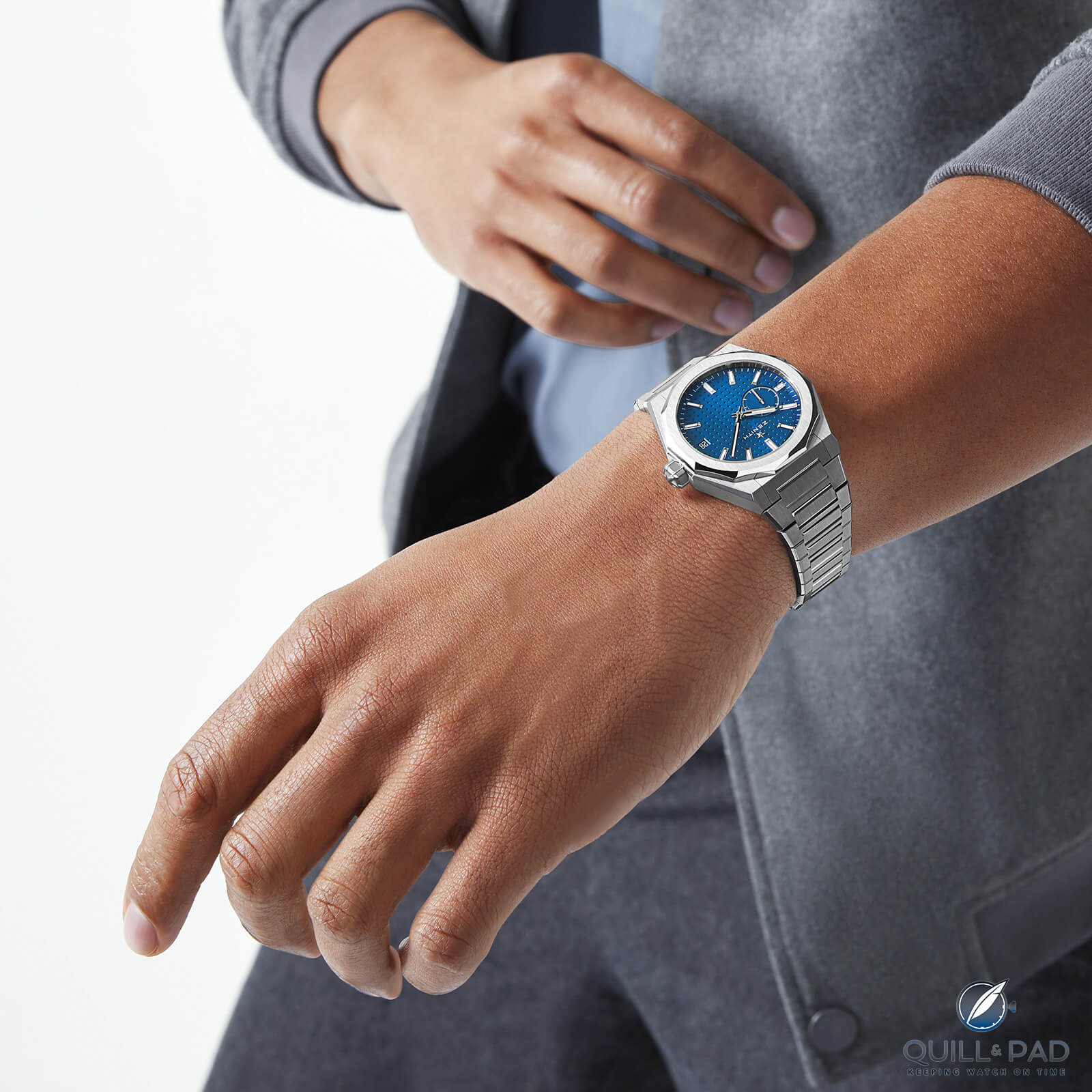 Zenith Defy Skyline on the wrist

This brings me to 2022’s Zenith Defy Skyline, a very enticing addition to the Defy collection that solves two problems for the brand with one product: competing with the most popular steel sports watches on the market and finally having a lasting base for the increasingly important Defy collection.

The modern Defy collection began as a rebirth of an old model name and focused on chronographs, skeletons, and some incredibly complex high horology with models like the Zero G, Lab (later called the Defy Inventor), and the Double Tourbillon.

The collection was a stylistic upgrade to the more classic sports watch Chronomaster and a clear departure from the Pilot and Elite lines. But for all the incredible watches and the solid lineup of chronographs, the collection didn’t feel like it had a solid base – or more so that it was too polarizing with the busy dials to appeal to a wide range of clientele. In the spring of 2018, Zenith launched the Defy Classic, which included both skeletonized-dial and closed-dial time and date versions in titanium with what looked like an integrated bracelet. 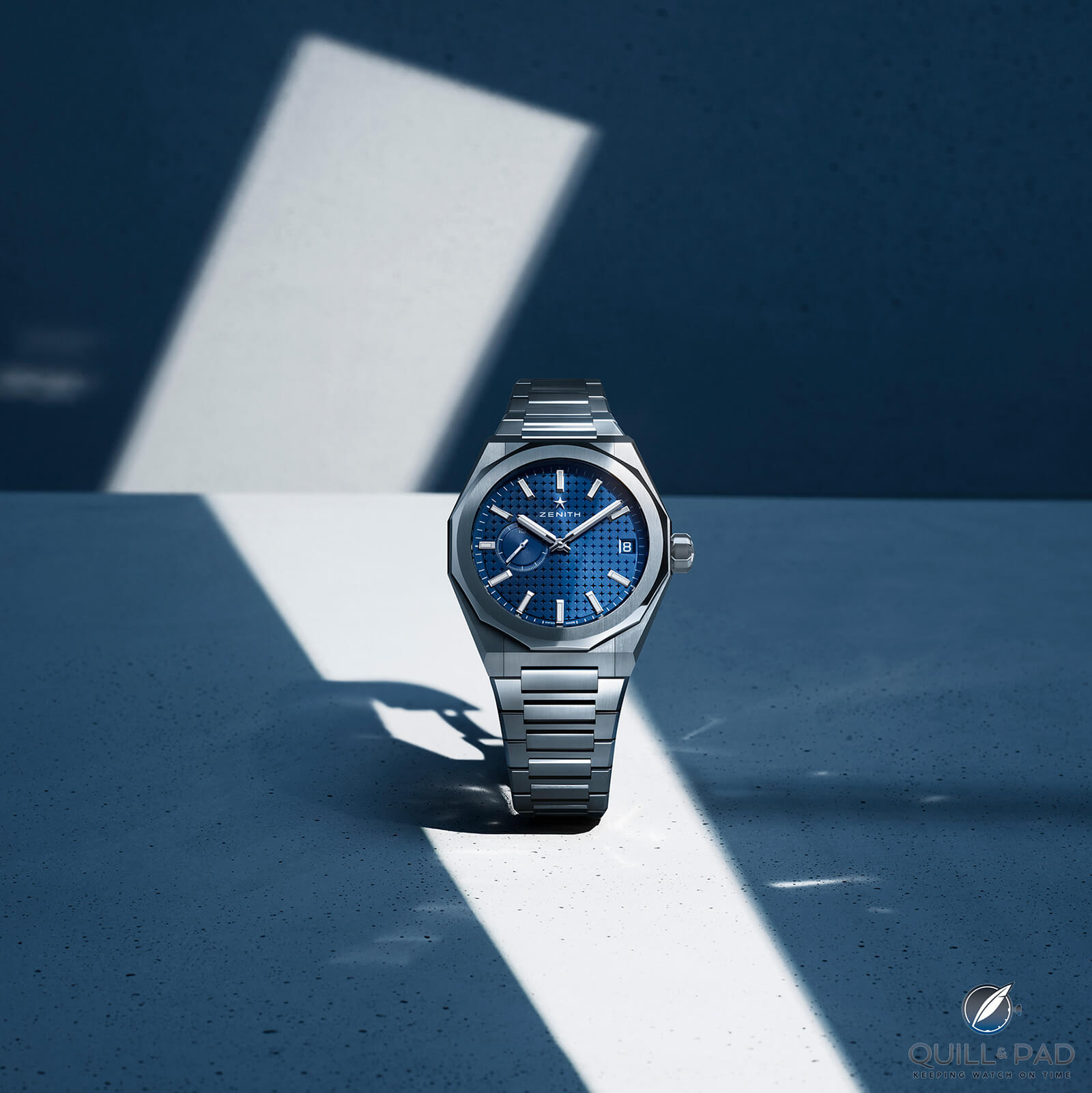 However, it wasn’t a true integrated bracelet, and the style of the closed-dial version felt too plain to really stand out as an engaging base to the collection. The skeleton model was fine but still wasn’t too far from the chronographs already making up the collection, so it needed something more. All of this is more obvious in retrospect now that we see what has come next, the Defy Skyline. The watch is a clear and strong core for the Defy collection and stands alone as a top-notch steel sports watch that can take on the current market leaders.

And so with one launch, Zenith “killed two birds.”

The Defy Skyline is loosely based around the historical Defy, which had a faceted bezel (arguably the very first octagonal steel sports watch in 1969), but the Skyline switches it up to a dodecagon (12-sided polygon) and a bolder case silhouette. The bracelet is also closer to a truly integrated bracelet but as a bonus includes a well-engineered quick-release mechanism to switch between the bracelet and secondary included rubber strap. 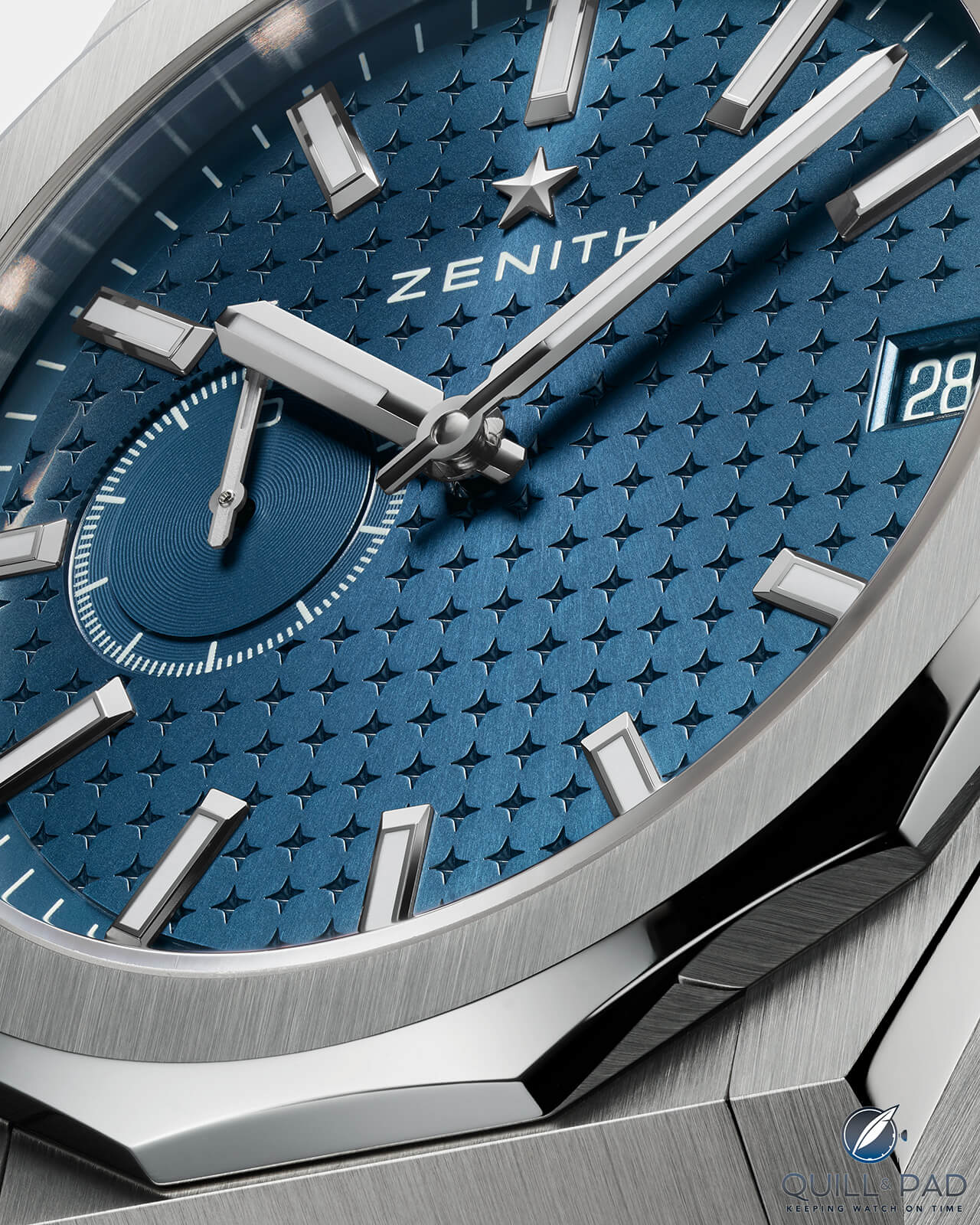 Its dial has an intriguing pattern of machine-engraved, four-pointed stars to give the dial texture in a way that doesn’t try to emulate the major stakeholders, and the aesthetic feels nicely considered and pretty well balanced. That might come as a surprise considering the watch has an off-center dial for tenths of a second at 9 o’clock, a date window at 3 o’clock, and the name and logo at 12 o’clock with nothing in the lower center of the dial. It may not be symmetrical, but it doesn’t feel weighted too heavily to any side thanks to the bold facets and repeating pattern of stars, which help to keep the eye moving. 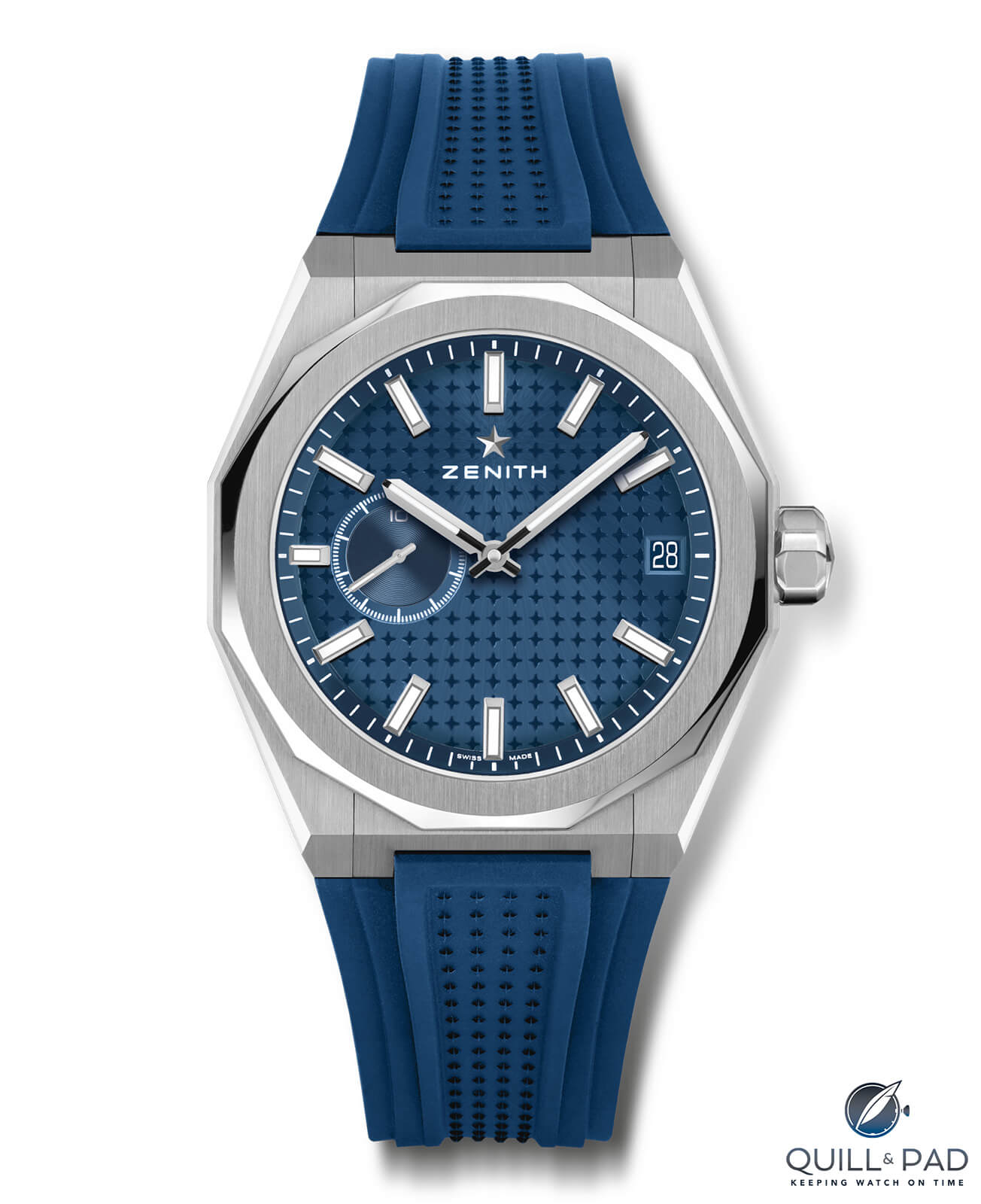 The most unusual feature that isn’t seen on any other brands’ steel sports watch is the off-center dial with a rapid 10-second display whose hand completes six rotations per minute. Channeling the much rarer foudroyante, the second hand is mounted to a wheel driven directly by the escape wheel, allowing it to rotate much faster at a 2:1 ratio as the escape wheel makes a rotation every five seconds. The speed is obvious but to make it clear what the dial is measuring there is a small 10 at the top and 10 hashmarks for whole seconds, plus another 90 small hashmarks to delineate the one-tenth-of-a-second rate of the El Primero 3620 caliber. 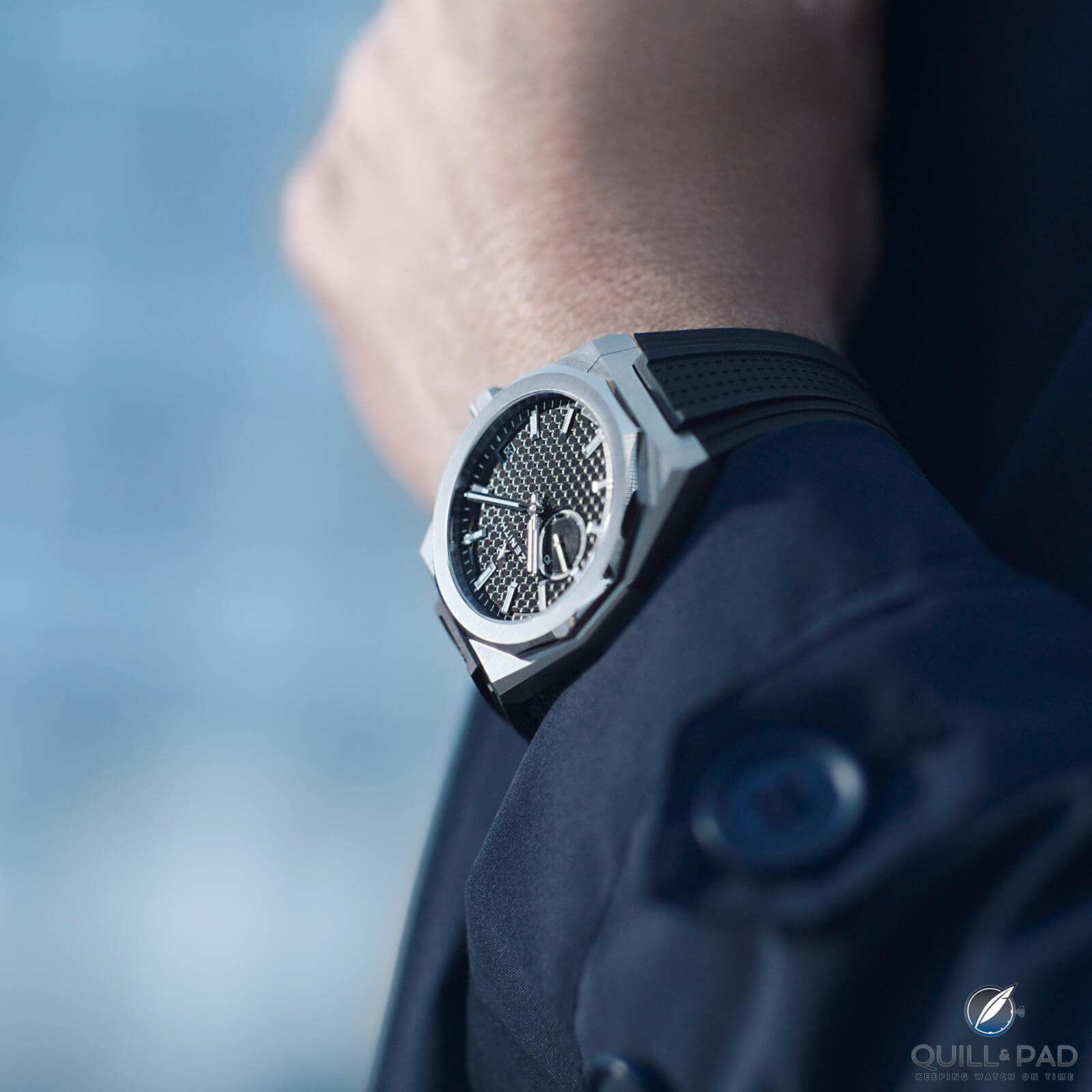 Zenith Defy Skyline on the wrist

Looking at the rear of the watch, we can see the balance beating away at 5 Hz and the silicon escapement and escape wheel whirling around. The escape wheel features the Zenith five-point star logo as the arms of the wheel, which is mirrored on the automatic rotor. One of the best versions of the logo is found on the crown, which is like the typical Zenith crown on steroids. Signed crowns are a nice touch, but the level of relief engraving here is awesome, the star protruding as if it were a button instead of a sticker.

That isn’t normally a huge deal, but it adds together with other features to make the watch more than the sum of its parts. The bezel with perfectly brushed and polished surfaces, the strong, angular case, the ultra-clean bracelet that follows the form effortlessly . . . they all send a message of quality and attention to details. But why is that important? Because subconscious messaging is what you need to establish a new steel sports watch as a worthy competitor against the reigning champions. 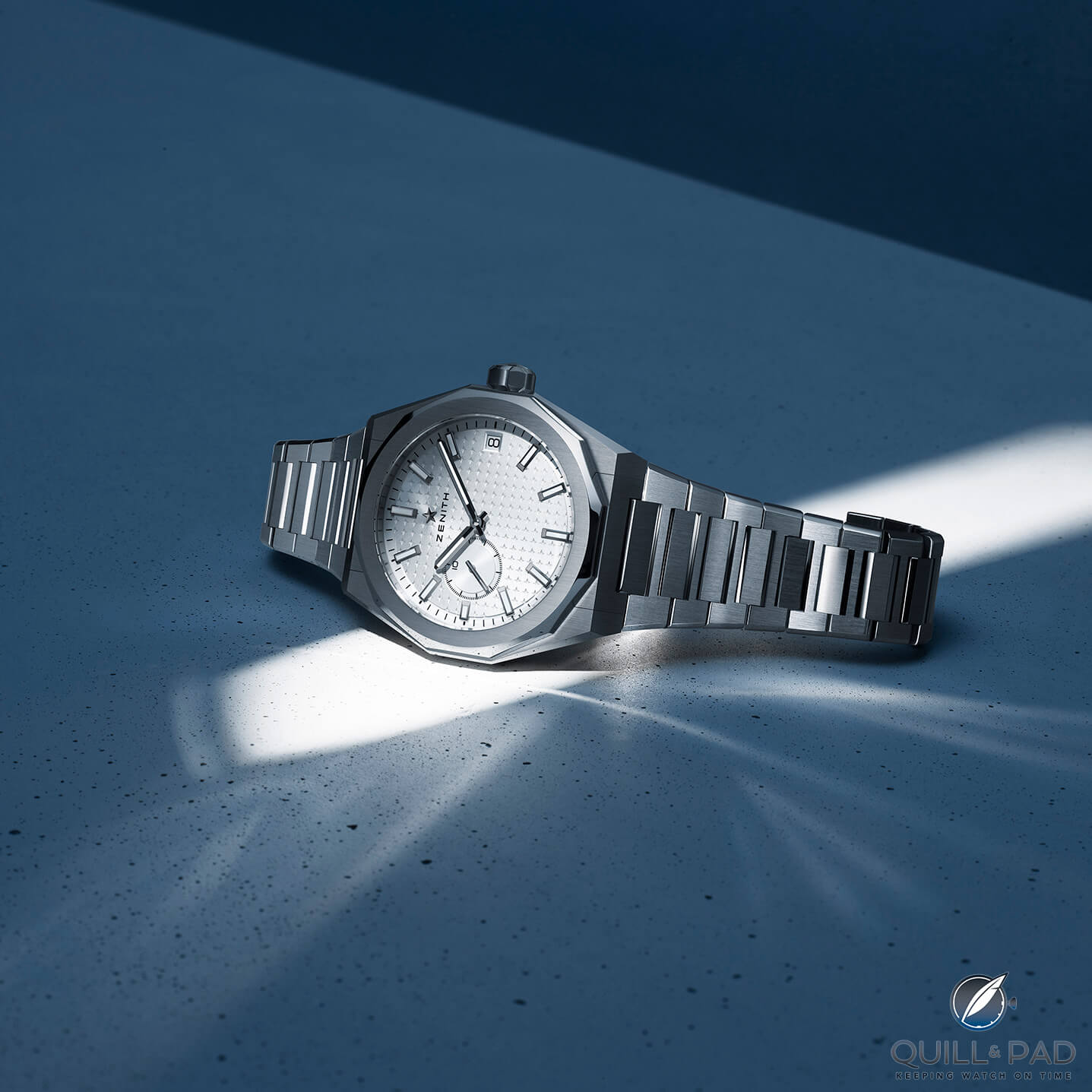 It shouldn’t be necessary, but the industry is in a bit of turmoil lately, and while there are some signs of things settling down, the insane demand and tiny availability for steel sports watches from the “big three” has opened up a niche in the market that is just waiting to be exploited. The low end is more than covered with plenty of great options under $5,000, and the very high end is still dominated by Patek Philippe, Audemars Piguet, and Rolex. But out of all the pieces that come in between $5,000 and $15,000, a reigning champion has yet to truly emerge.

Zenith benefits from not releasing this watch two to four years ago when brands were all piling into the steel sports watch market, often with similar results. One could argue that the Defy Classic was that attempt, but unlike many brands, Zenith clearly decided to go back to the drawing table and see what it could improve. The Defy Skyline is obviously very close to the Defy Classic with a shared case outline and some basic similarities, but with enough changes and upgrades to make it a truly a new watch that strayed far enough from the standard fare to give it a good chance of becoming the best mid-range steel sports watch on the market.

Thanks to the textured dial, 10-second subdial, sharp 12-sided bezel, easy-to-use quick-release strap system, and tactile crown, the Defy Skyline stands out in a busy marketplace. It does something that the Girard-Perregaux Laureato still hasn’t done in my eyes: convince people that it is a great alternative for those who want something different. The Defy Skyline comes in at half the price and has better looks with a bit of flair. 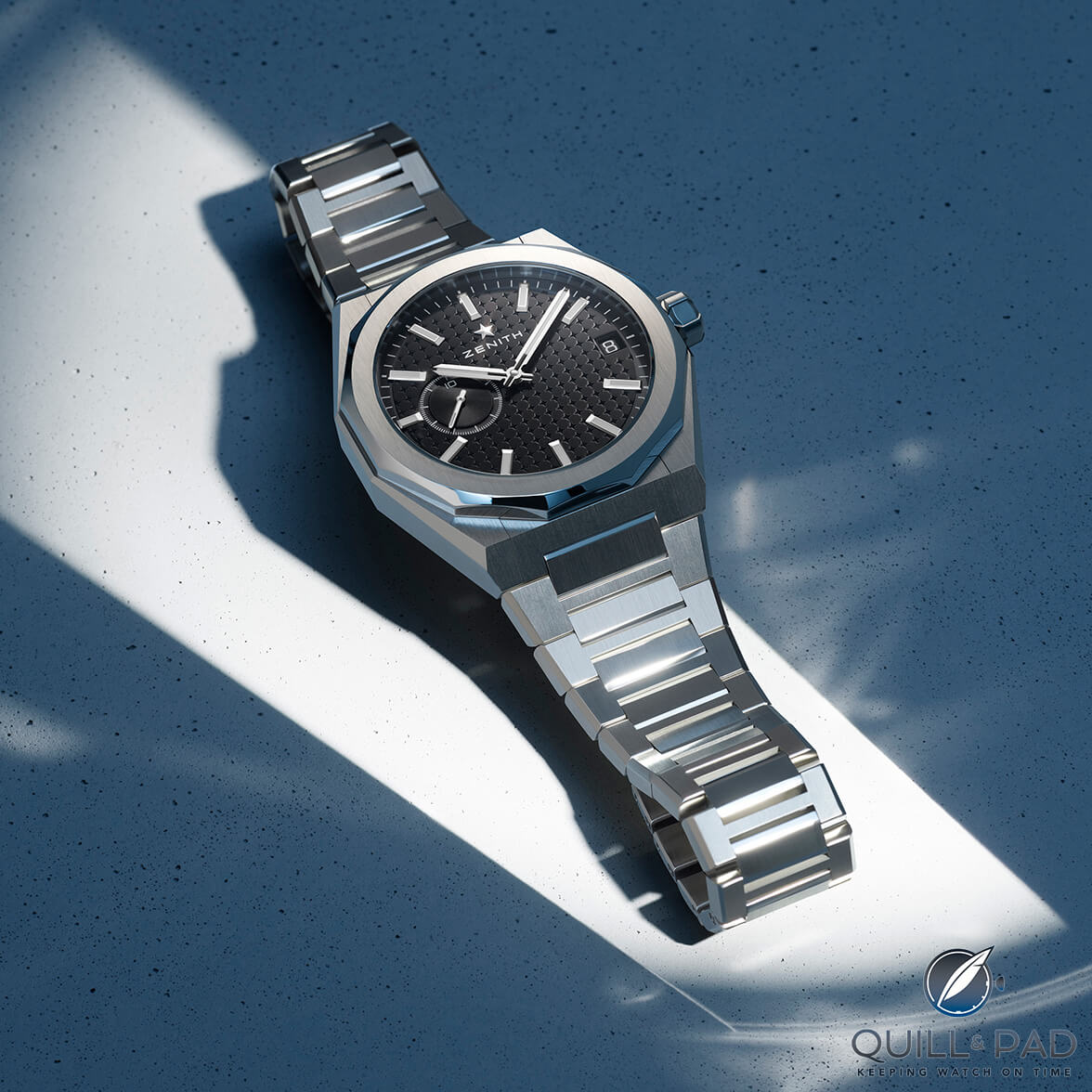 Time will be both the judge and jury, but Zenith knocked it out of the park with this model. The Defy collection had already been built up as a modern cousin to the Chronomaster aesthetic, and now the collection has a true heart. The Defy Skyline is exactly what the brand should have released to anchor the collection around something broadly popular and to give the overextended legends a run for their money – and their market share.

While we are running, let’s try to give this watch a rundown!