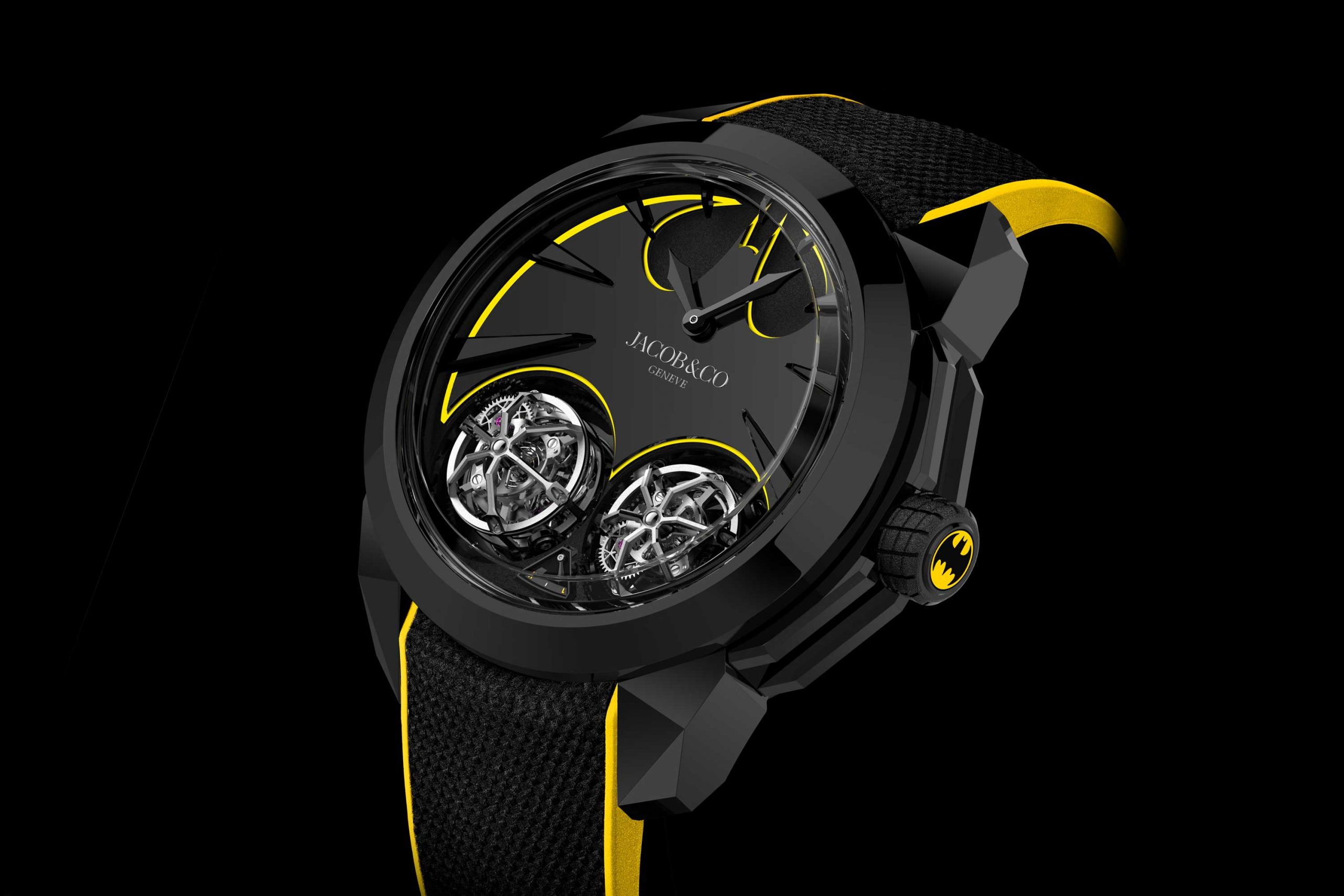 The cases share the same form — resembling the suit worn by Batman — with angular multifaceted details much like Batman himself. The titanium case is as stealthy as the Batmobile, thanks to the material’s lightweight properties combined with matte sandblasted and horizontal brushed finishing. The winding crown is clad in a Batmobile tire-style band that encircles a yellow and black Batman logo on the titanium model, and rose gold and black on the gold model.

The face of the watch echoes the theme with a subtle representation of the Batman signal, which has been formed from a slice of black onyx and is outlined in yellow Neoralithe that has been enhanced with Super-LumiNova to glow blue at night. Anchored to the outer rim of the dial are protruding claw-like hour markers that hover over the center of the dial. On the back of the titanium model, the beholder is treated to a portrait of Batman, as well as the Jacob & Co and DC logos. These have been laser etched into the underside of the sapphire caseback and then filled with yellow and black. The rose gold version also has a sapphire caseback, but this time it has been left clear to allow an unadulterated view of the Gotham City movement that lies beneath.

One doesn’t simply have to look through the sapphire caseback to admire the movement, as both models are equipped with a pair of triple-axis tourbillons. These tourbillons are crafted in sandblasted titanium in the form of the grappling hooks that Batman would use to scale the buildings and landmarks of Gotham. This “Bat-caliber” (or, as it is technically known, JCFM10) comprises 382 components, including a rose gold Bat Bridge that spans the entire diameter of the movement. The most technical elements, however, are the tourbillons. According to Jacob & Co, “Each one of them rotates along three different axes. Each axis drives a separate cage. The first, outermost one makes a full turn in 180 seconds, the second one in 48 seconds and the third one, closest to the 3Hz balance wheel, in 24 seconds.”

5 Reasons Why You Should Consider Owning A Colorful Watch