Jacob & Co. went to Sicily to release its latest opulent opus, the Opera Godfather 50th Anniversary, which features a rotating movement with a triple-axis flying tourbillon and double-cylinder music box playing the 120 notes of the movie’s theme song. 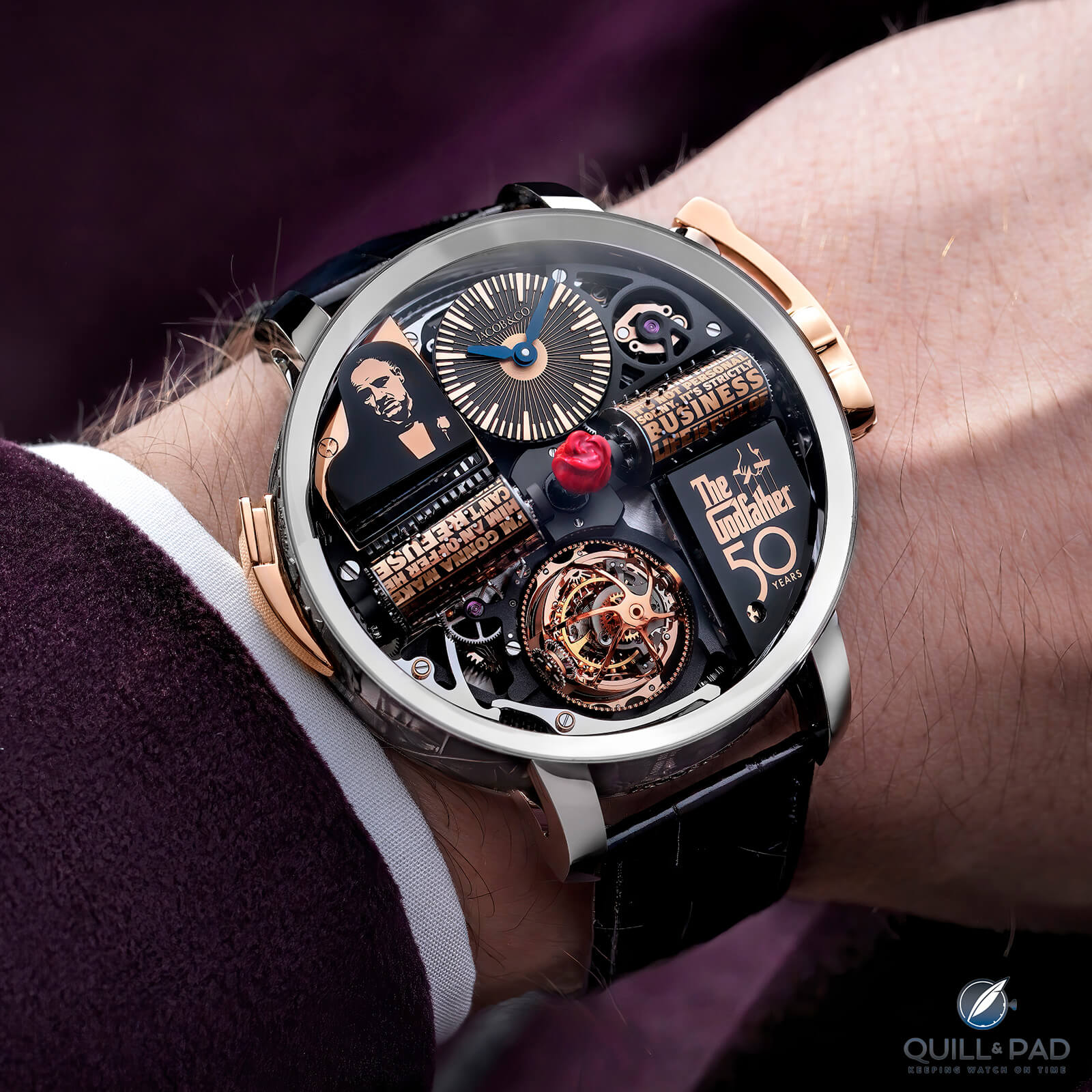 Adorned with pioneering laser-engraving on its 49-millimeter case band, the Godfather 50th Anniversary is a true horological commemoration of the first movie in the iconic Godfather trilogy of films based on the book by Mario Puzo. 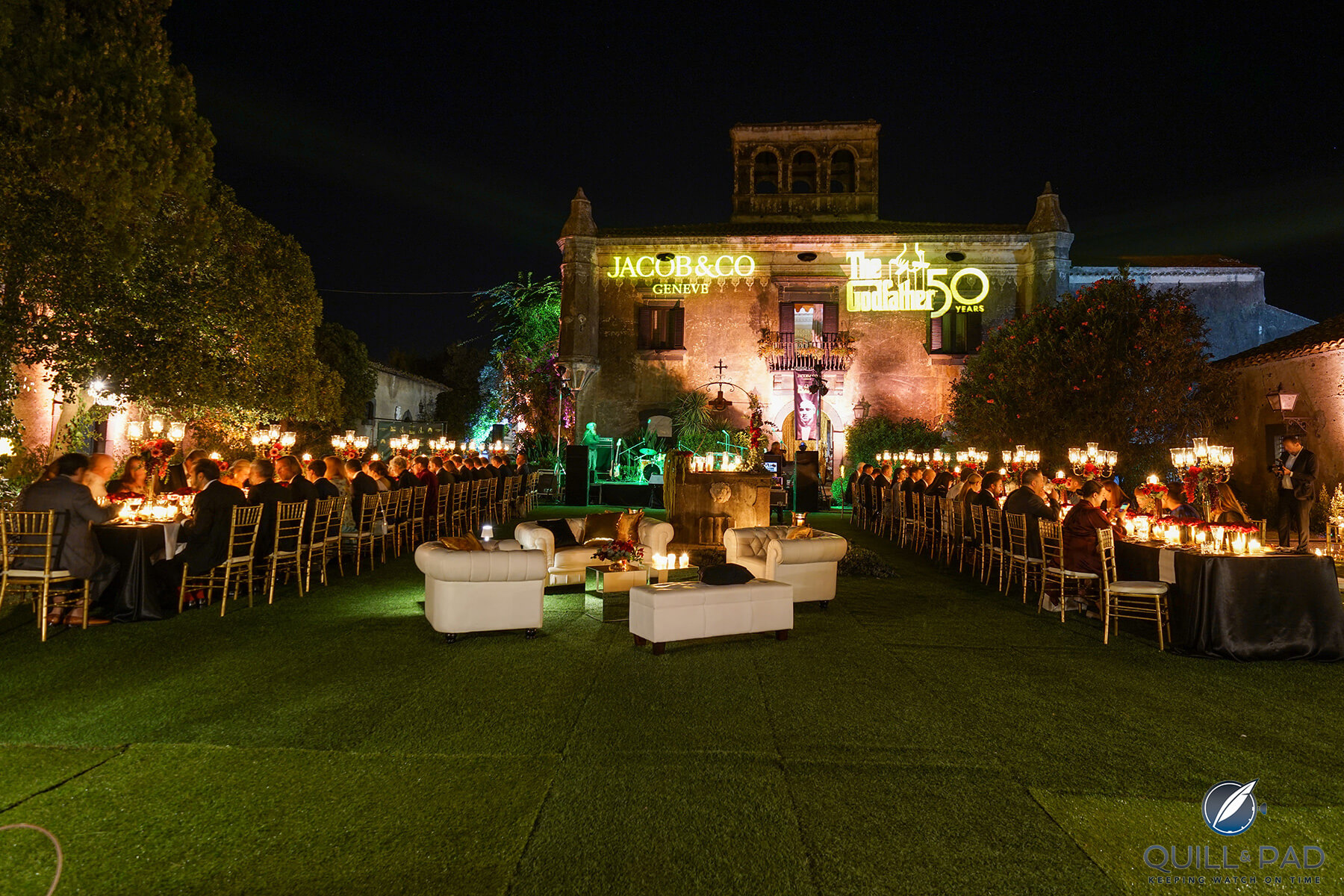 The setting in which Jacob and Co. presented the new Opera Godfather 50th Anniversary was as precious as the watch itself: the Grand Hotel Timeo in Taormina, Sicily, surrounded by the glittering Mediterranean, lush gardens scented with flowers, thyme and oregano, and the ever-present subtly huffing and puffing Etna volcano in the background.

So, what is new on this 49-millimeter watch? Well, this iteration is more connected with the movie than any other timepieces in the collection first introduced back in 2019.

The movie – in part shot in the vicinity of the hotel – was the first film that Jacob Arabo saw upon moving to the United States of America in 1981. Arriving as a penniless 14-year-old immigrant from Uzbekistan in 1979, it had taken him two years to make enough money to afford a ticket to a movie theatre.

The rest is history. In the year 1986 he founded the New York-based company now run by his son Benjamin Arabov. “Family is really a major theme in the Godfather, which is why we feel such a strong connection with the movies,” said Benjamin Arabov regarding the three-time Oscar and five-time Golden Globe winning trilogy directed by Frances Ford Coppola. 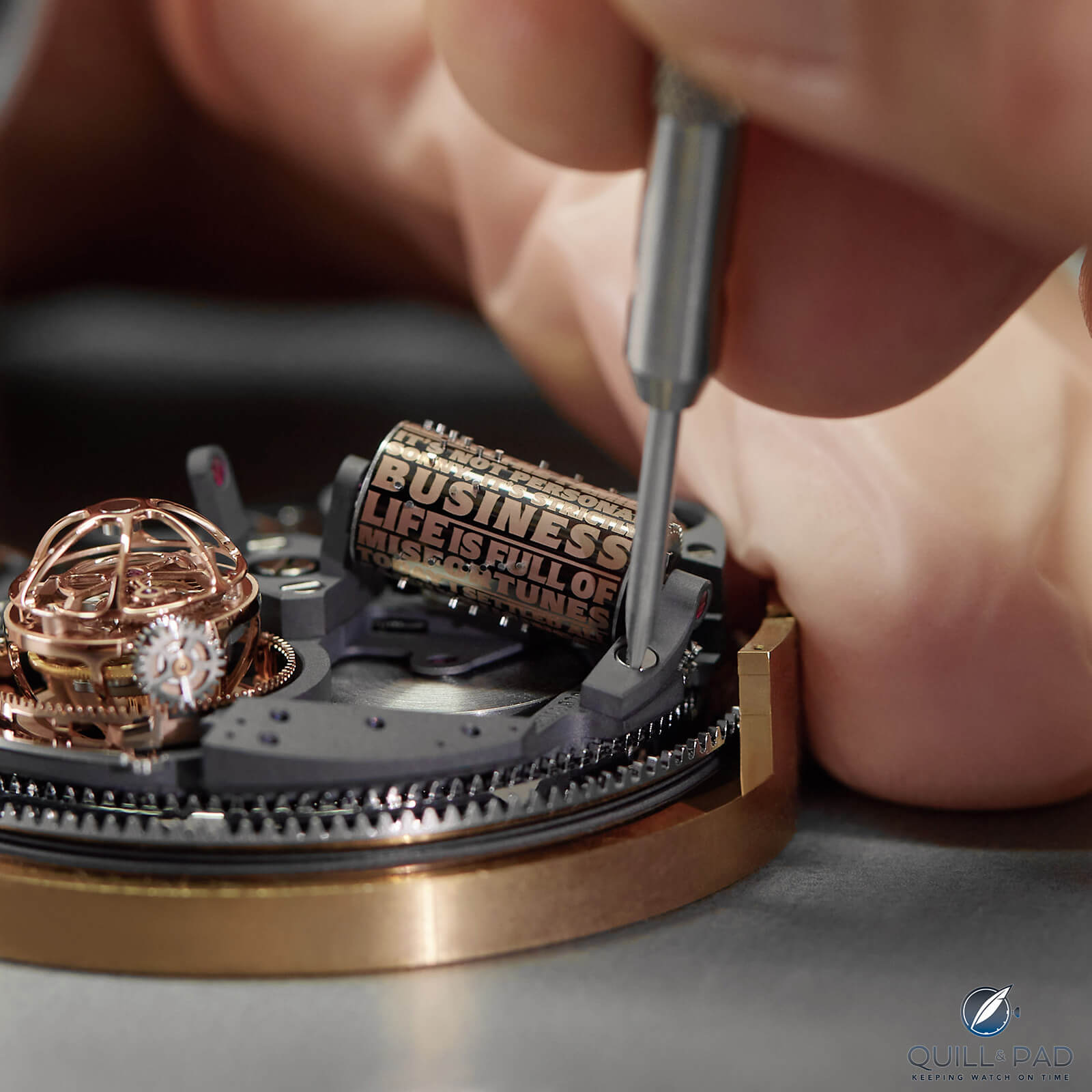 The movement is not only equipped with a triple-axis tourbillon and two music boxes, the whole movement also rotates. This “requires a level of coordination between the combs, a perfect adjustment of the barrels, which are tilted by some 20 degrees, plus the management of the rotation in the entire movement,” continued Schiesser.

The mechanism is built on a two-level platform to achieve this. And to make sure the 120-note theme song is audible outside the case, the team connected both levels through a central axis and several “special screws” that propagate the sound. 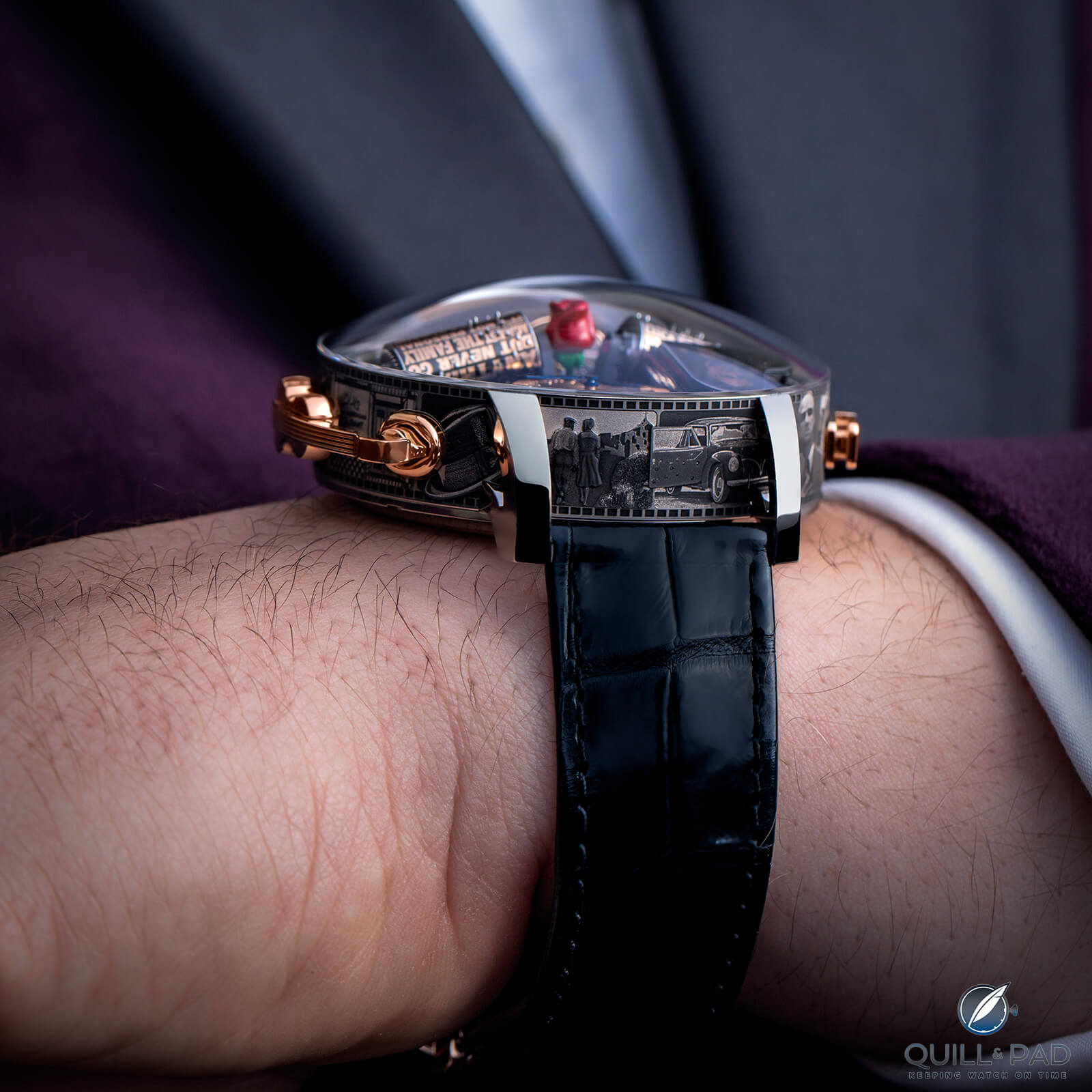 The pink gold cylinders carrying the precision-tuned pins playing the sound have been engraved with another audio connection, but one that will play out in your head: 13 of the most classical quotes in the movies, including “I’m gonna make him an offer he can’t refuse,” “Luca Brasi sleeps with the fishes,” and “Never ask me about my business.”

Jacob, the Godfather, and laser

“From the very beginning of the Opera Godfather, I wanted to go further, to celebrate the importance of this movie by showing actual scenes from it,” said Arabo. “I wanted it to be a literal tribute to everything the film stands for. But there is so little room. The entire piece is filled with components, and details, and symbols. So, for the Opera Godfather 50th Anniversary I came up with the idea of inscribing the movie’s key moments on the case, which seemed like a canvas waiting to be brought to life.” 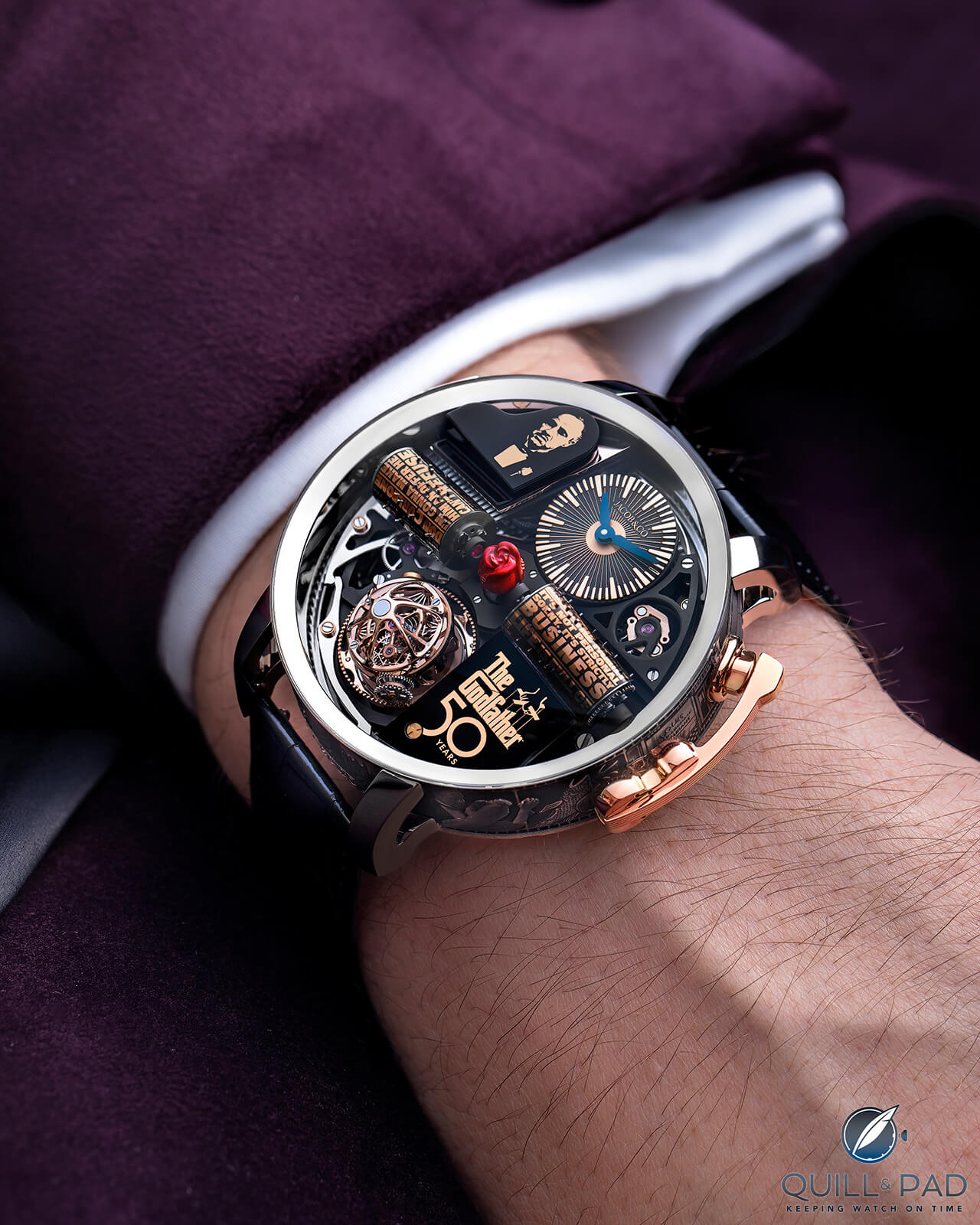 After the father and son spent a long weekend watching and rewatching the movie, they came up with a selection of 13 scenes. These are indeed iconic moments, but Jacob and Benjamin were also somewhat limited, given that the only face they are allowed to use is that of Marlon Brando. On top of that, the selected scenes had to be approved by Paramount Pictures.

When eventually given the all-clear, the father-and-son duo went to DM Surfaces, a pioneer in photorealistic laser engraving. Its technique, for the first time applied to a curved surface – the watch’s case band – is based on the Nanolaser and Femtolaser techniques.

Nanolaser is a burst that lasts a billionth of a second, whereas a Femtolaser burst lasts one quadrillionth of a second (if I am not mistaken, that is 10-27 of a second). This process removes matter and changes the structure and chemical composition of the metal. Thus, DM Surfaces was able to create 256 different shades of grey through selective oxidation. Some of these shades head toward sepia thanks to the copper content in what the Swiss call “grey” (white) gold.

Smoothness was mandatory so that the engraving encircling the entirety of the case wouldn’t rip clothing or get stuck on things. “We added several phases of smoothing, which is like laser polishing,” said Andrea De Luca, founder and CEO of DM Surfaces.

Is a rose a rose?

The watch also features a red three-dimensional enameled rose in the middle of the 49-millimeter expanse where the display of hours and minutes is truly secondary. In the movie the rose is a symbol for the don, who displays his top rank by wearing a red rose in his buttonhole. 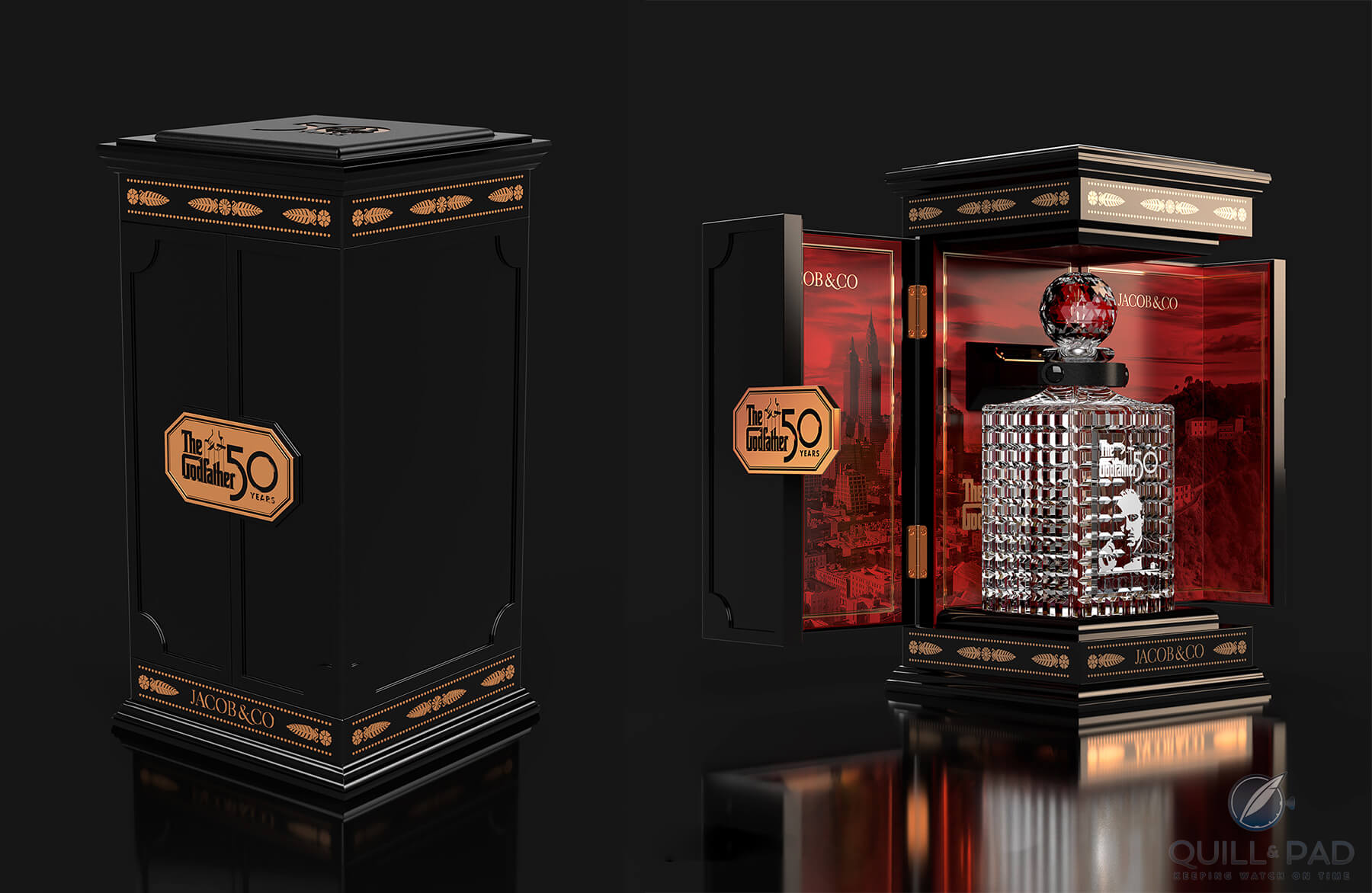 The rose also reoccurs in the extras that come with each of the 50 watches in the limited edition. These include a crystal decanter in a red velvet-lined wood case with a high-resolution image of Marlon Brando and the film logo and an all-new version of The Godfather Pen, a black celluloid pen whose cap is adorned with a red rose. 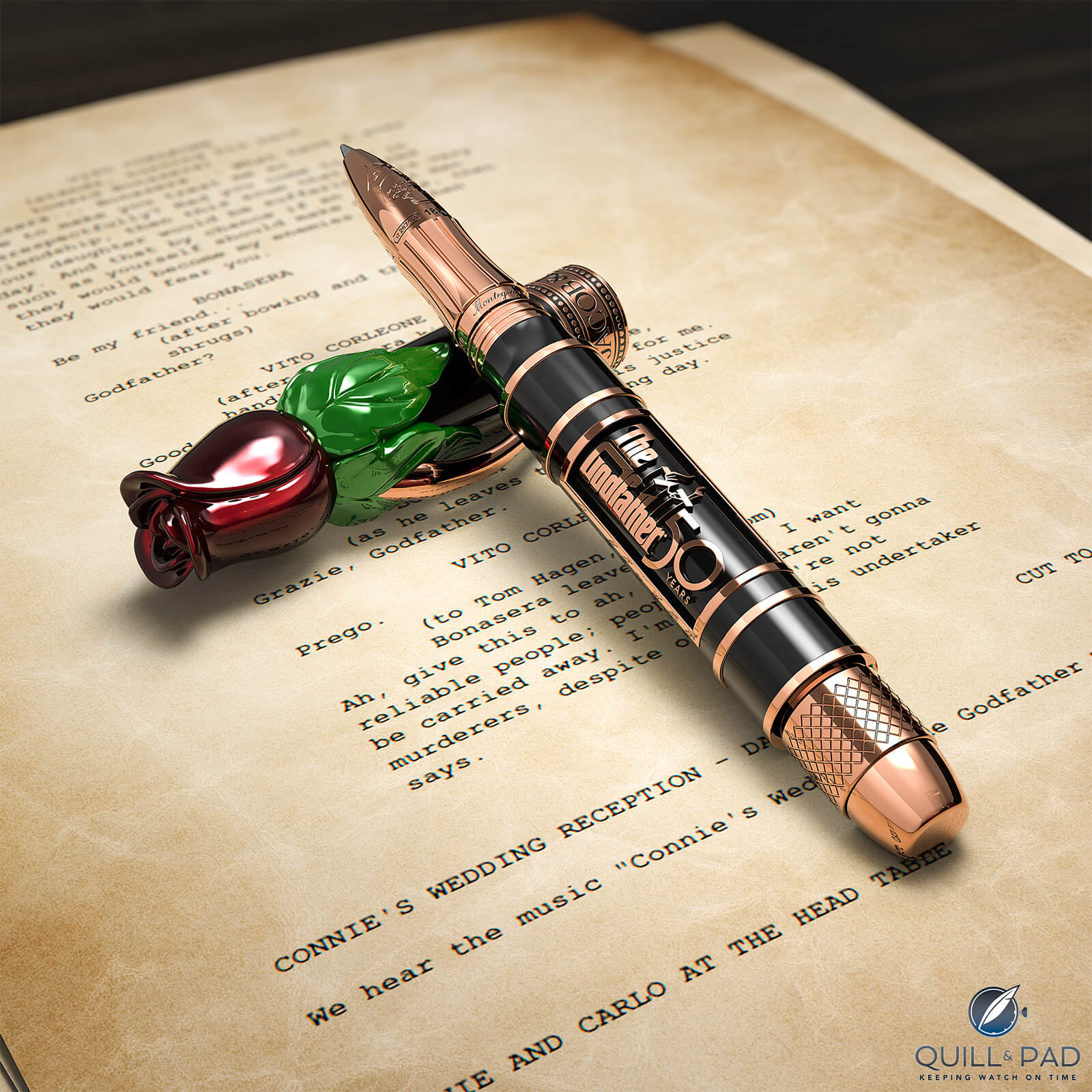 Following the watch presentation, celebration ensued in what in the movie is Don Corleone’s garden, Villa Schiavia. Here a lavish garden party featuring an Italian gourmet feast was served on long tables adorned with thousands upon thousands of red roses to watch journalists and VIP guests arriving from all continents to the event. 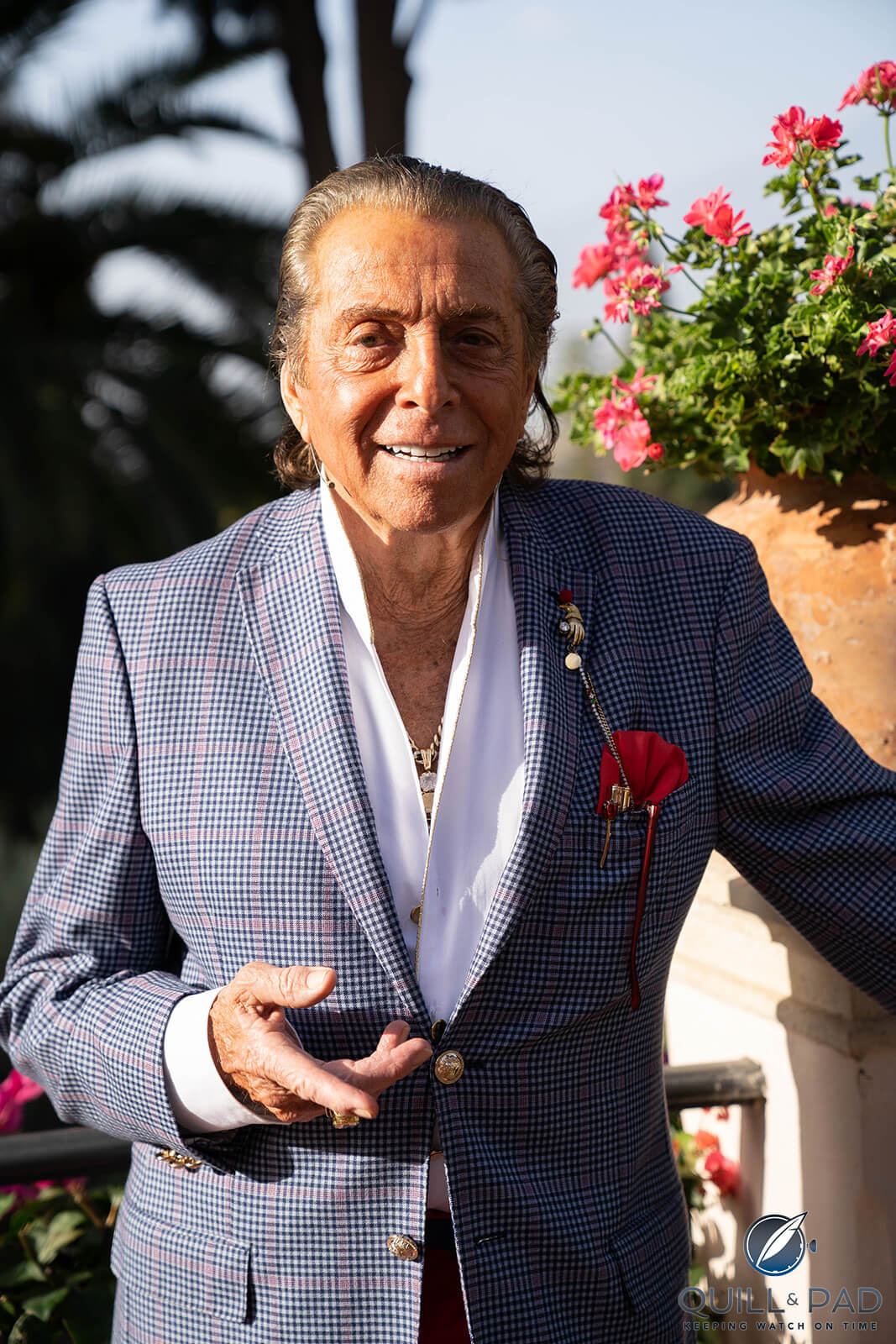 Gianni Russo, who played Carlo Rizzi, the don’s son-in-law in ‘The Godfather,’ was also in attendance (photo courtesy Anders Modig)

And, yes, one of the actors was there as well: Gianni Russo, who played Carlo Rizzi, the don’s son-in-law, in the movie. 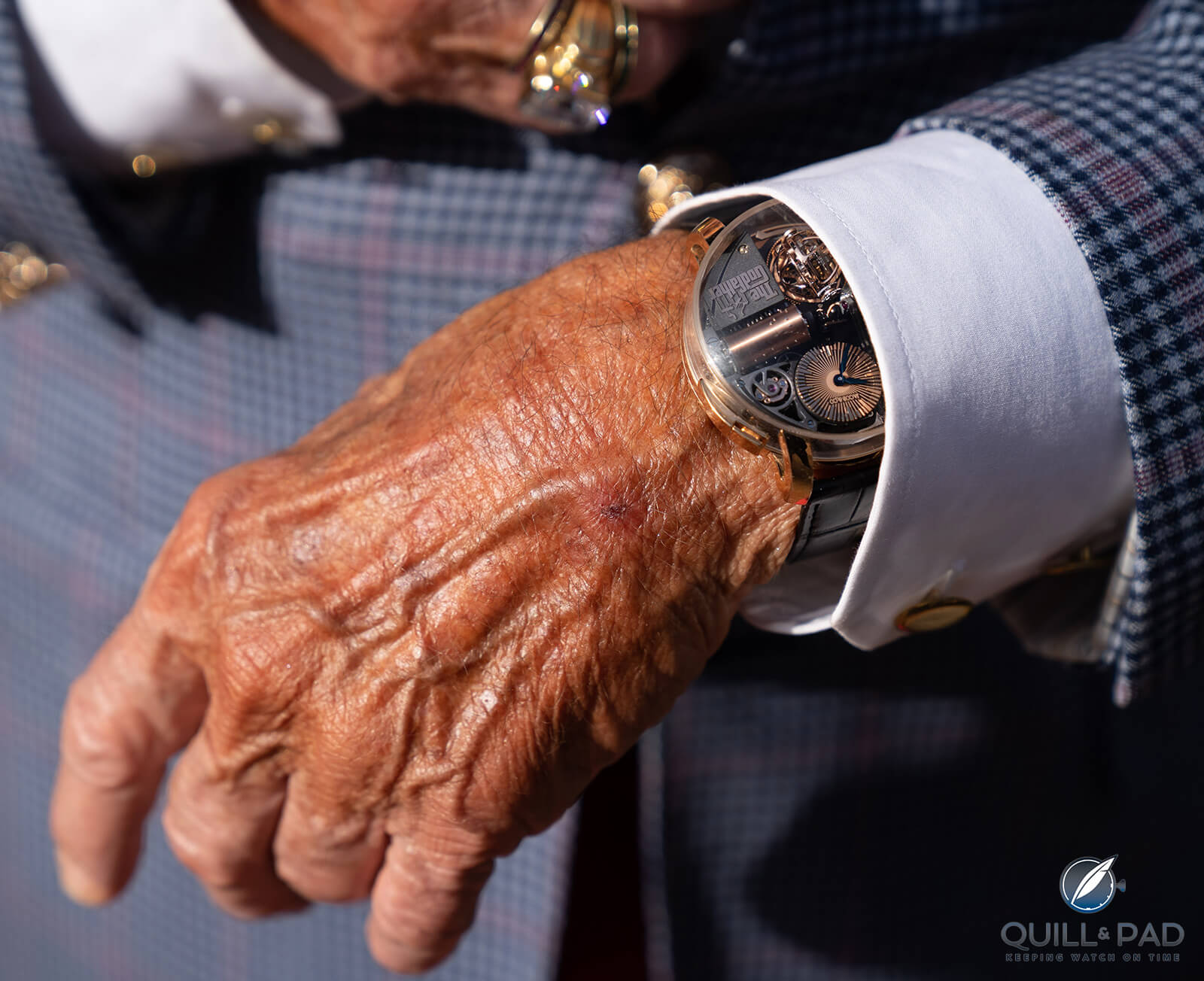 So what do you think, is the Jacob & Co. Opera Godfather 50th Anniversary an offer you can’t refuse?

Jacob & Co Bugatti Chiron Tourbillon: As Exuberant And Fun As The Hypercar It Is Inspired By (Video)

Jacob & Co Astronomia Tourbillon Baguette: A Universe On The Wrist

Behind The Lens: The Ultra-Rare Patek Philippe Reference 5070J-013 – Reprise