Watch Femme: What Women In The Watch World Were Missing

During the pandemic, the watch world was pretty much stuck at home. Instead of fairs, we had computer screens. Instead of conducting in-person interviews, we had the tinny sound of (too much) Zoom.

And instead of get-togethers, we had a fresh social media app called Clubhouse, which permitted many people to be on one “call.” It was in a way the next best thing, and it worked. 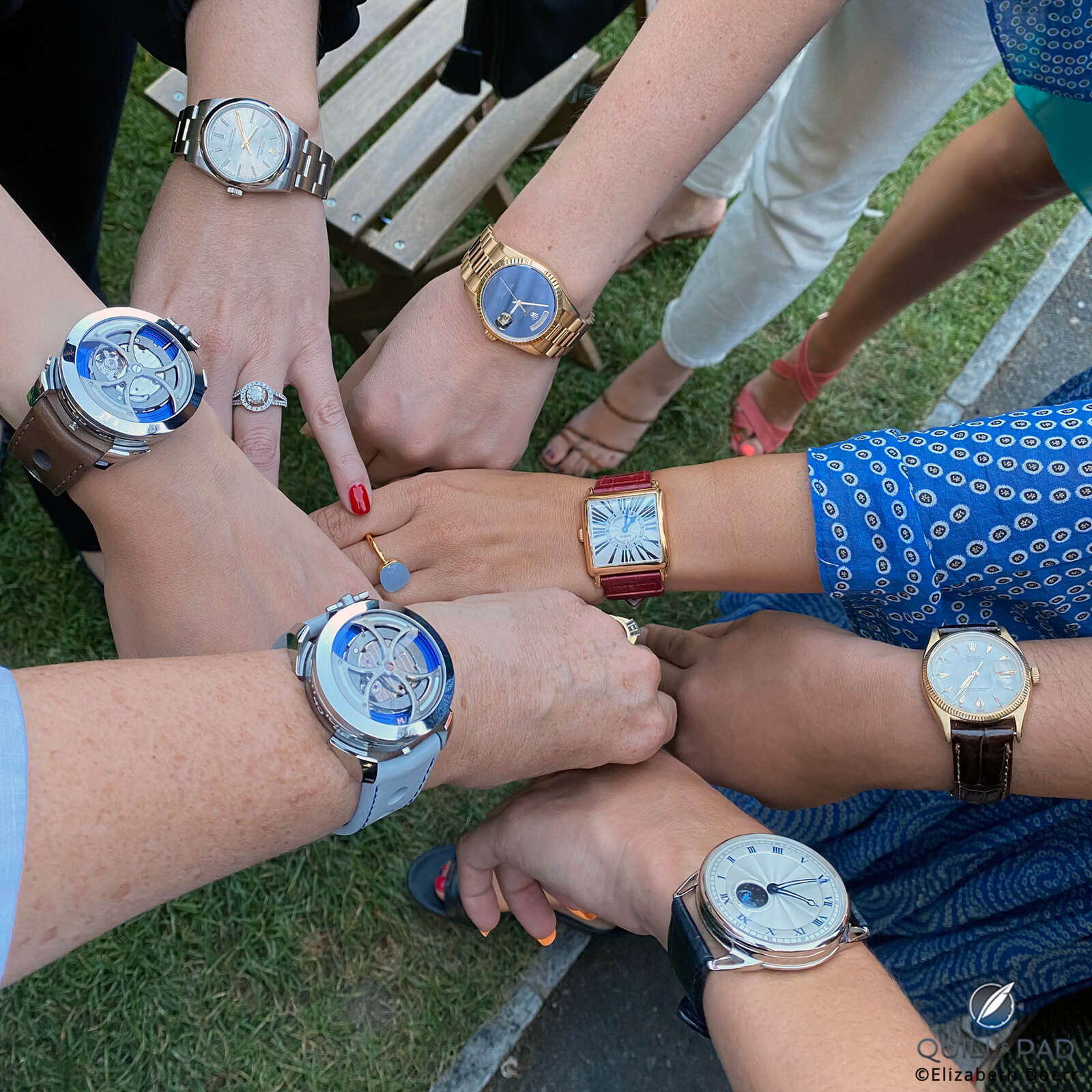 Clubhouse turned out to be quite significant for some of us because it helped give birth to a new movement that (happily) garnered far more attention than it might have had we not all been at home and starved for the ability to share our passion, hobby, and in many cases enthusiastic livelihood with like-minded others in this way.

Watch journalist Suzanne Wong, PR consultant Laetitia Hirschy, and watch executive Nathalie Veysset began the movement by calling Clubhouse sessions to life that attracted between 50 and 100 males and females to listen to and to talk about issues that touch everyone, but most particularly women.

The success of the Clubhouse talks inspired the energetic trio to found an association called Watch Femme, which they announced during Geneva Watch Days 2021 (watch a video of the session recorded by Phillips at https://fb.watch/9mtVnRALPx/).

The express mission of the Watch Femme association is to promote inclusivity in watches, amplify women’s voices in the watch world, highlight female contributions to it, and help create many more career opportunities for women.

In a nutshell, Watch Femme is about building connections for women, presenting solutions for them in the form of educating and mentoring, and changing how the female consumer, executive, watchmaker, and so on is reflected in general in both the business and cultures of horology. “Our purpose is to promote the voices of women and the position of women in the watch industry on both the industry side and the collectors’ side – the watch world [as a whole],” explains Veysset, who was the CEO of independent watch company DeWitt for four years between 2008 and 2012. 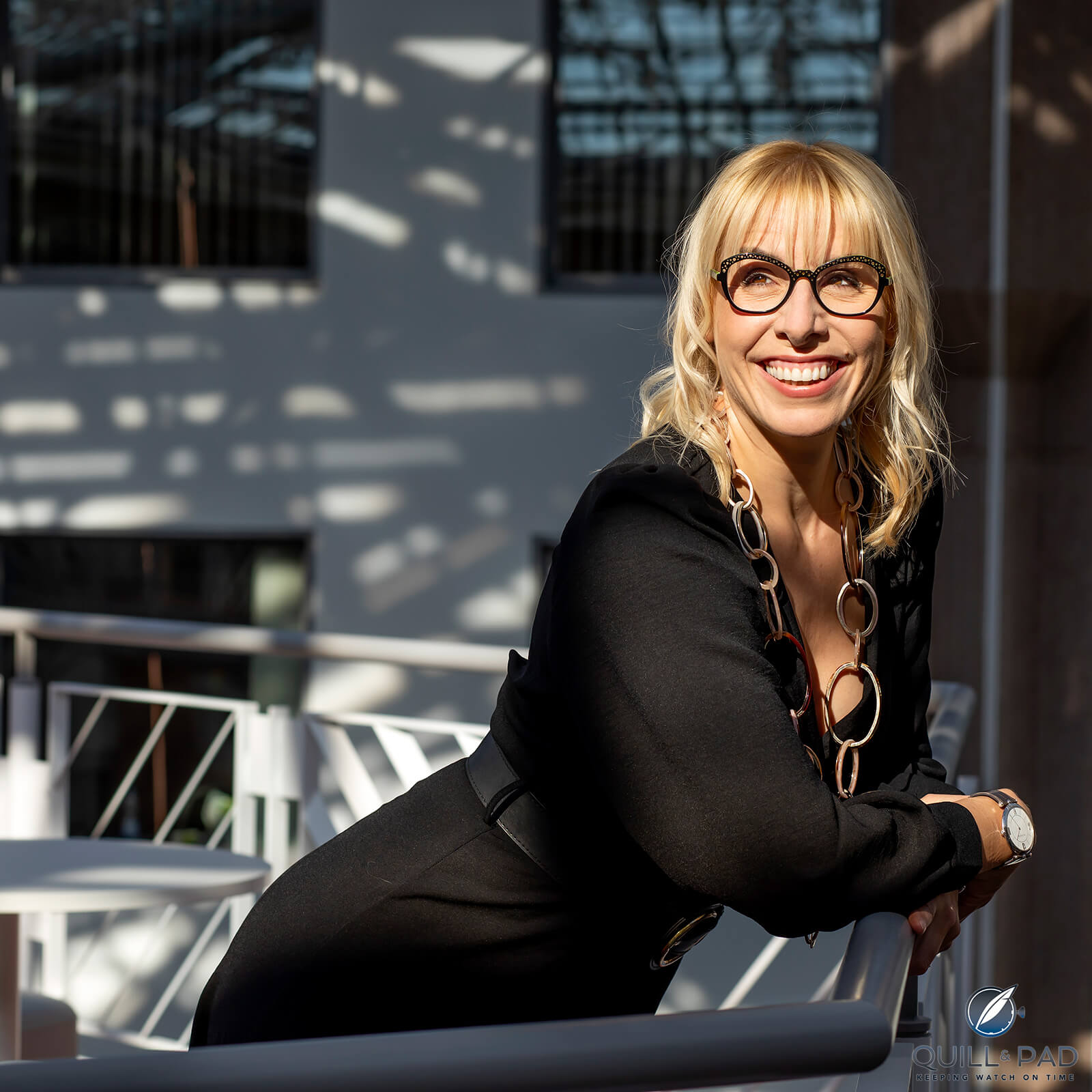 “One way to make change is from the talent and the lobbying side as well as through networking,” Veysset continues. “For me, coming into the role at DeWitt as CEO the most difficult thing was that I didn’t have a network and support. And it took me two years almost to get people to really start talking to me and to find my way. And I think it’s the same thing for many women. When you look at men, they’ve been in this industry for ages going around, building up a network, and the support system exists already. They have competition but beyond that it’s easy.”

Watch Femme would like to help make such support systems available to women as a matter of course, “In a formal way,” adds Wong. “Because men have their systems, which are kind of already ingrained, they’re built in, they’re structural. We don’t have that, and we can’t just wait around until it happens. We have to consciously build it because we don’t have an existing base to build on.”

One of the other issues is that there are far too few women in positions of authority in watch companies. And this has a lot to do with there not being a big enough pool of qualified candidates. “When you get into the jump from director to, let’s say, CEO, the pool to choose from is mostly men because already at the beginning women have been cut out. We want to help from the ground up, help create that pool so that there will be more choice,” Hirschy explains. 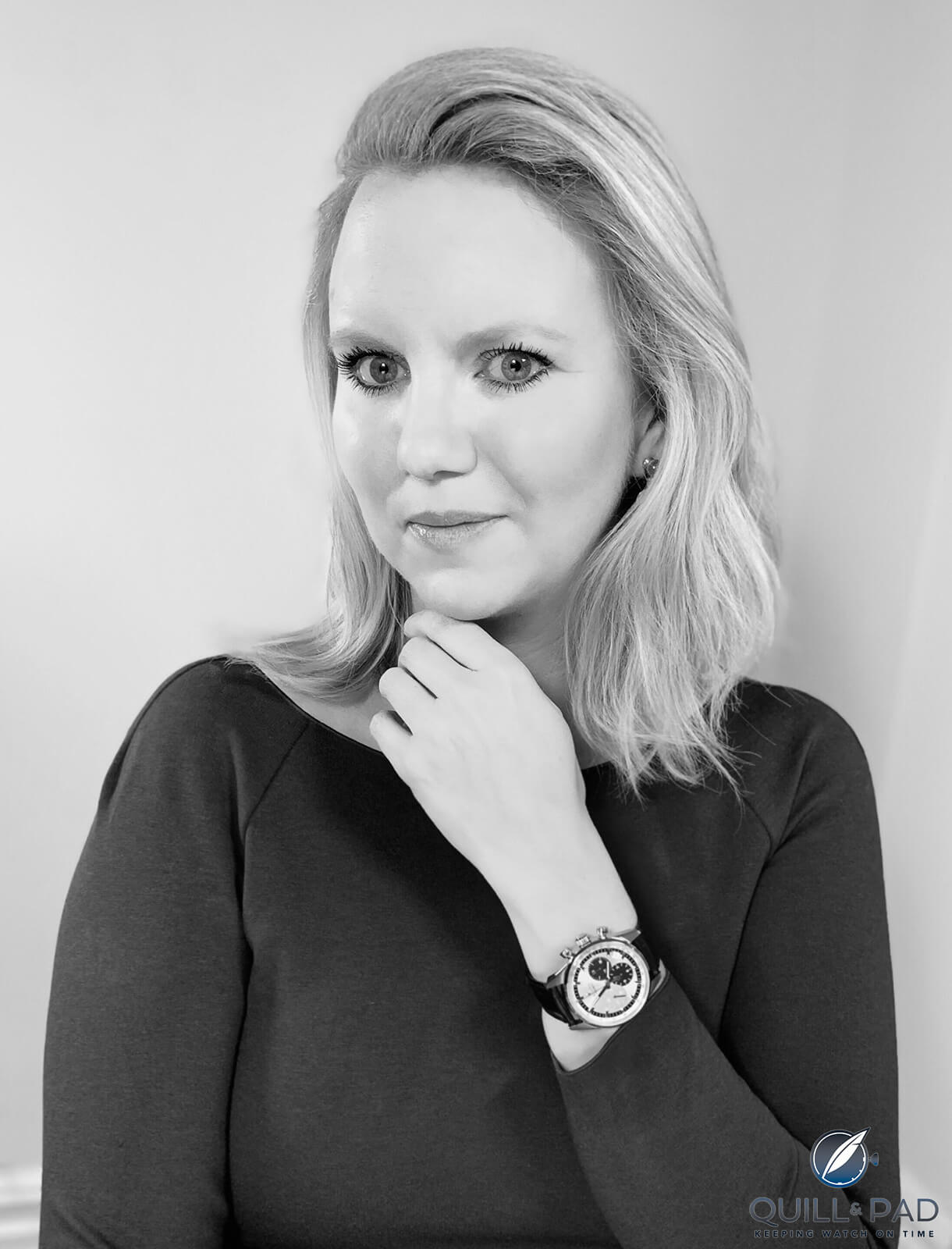 “So we are going to work with women in the industry but also with schools to make the women more aware of possibilities for a career in watches, from the technical perspective and also from the business perspective,” adds Veysset.

“Too many women don’t see a place for themselves in this world. If, and if ever, that thought occurs to them, we want to be there telling them that’s not true; that we can help them be part of this world in a successful way,” adds Hirschy, an experienced PR executive who founded her own PR agency, Kaaviar, with business partner Ariana Sellefyan.

Watch Femme’s strategy as Veysset succinctly outlines, is to address the subject from the bottom up and the top down. “Bottom-up, top-down action amplified by generational change, is, I think, when you start to see things happen,” adds Wong.

Mentoring is also a big part of what Watch Femme intends to bring to the not-so-distant table of the future. And I was delighted and surprised to hear that Watch Femme’s effect is already starting to be felt after just a year of existence. “Even simple things like people messaging us on Instagram saying, ‘I took part in one of your Clubhouse sessions and that was the first time I’ve ever spoken in public and had my voice heard and I was so encouraged by that that I decided to start my own Instagram page’,” adds Wong.

Hirschy says that Watch Femme has already mentored two women into new watch-related jobs. “They came back saying thanks to you and thanks to Watch Femme I’ve had the courage to put myself out there and then they got the job,” she says.

A lot of Watch Femmes?

Watch Femme also plans on holding collector events, get-togethers (GTGs) as they’re known in the watch world. There have already been two despite the pandemic: one lovely evening of trading stories and comparing watches and experiences during Geneva Watch Days 2021 and another, more consumer-oriented event aimed at every type of potential watch buyer from beginners to journalists and everyone in between during Dubai Watch Week 2021. 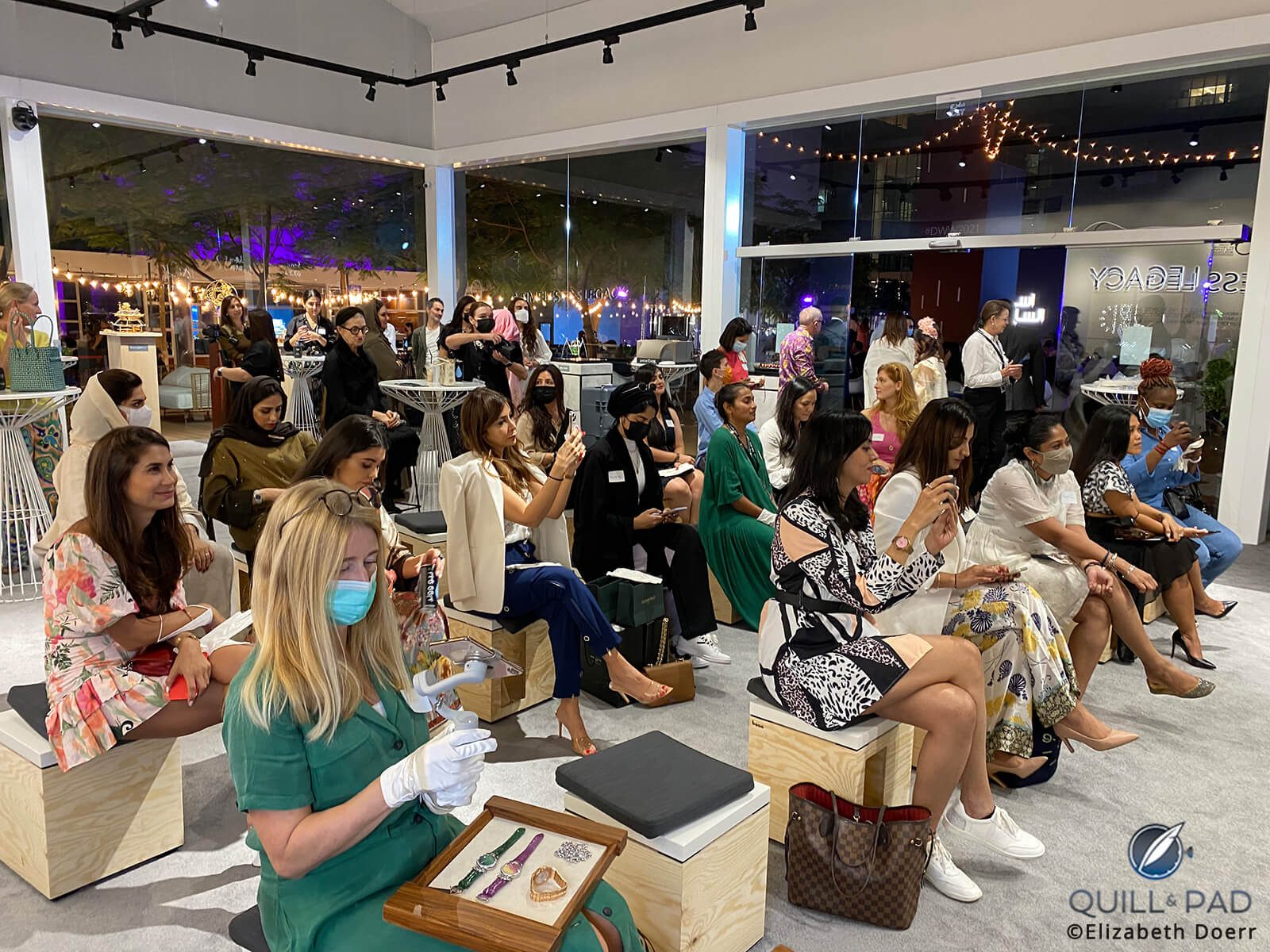 “Something else we’ve also found is that there’s very little data in terms of percentage of women in the industry, especially for the female consumers that are buying – and not just buying ‘ladies’ watches’,” adds Hirschy. “Something we want to achieve is to get this data because whenever we share data, people start to listen.”

“[We have] a lot of empirical observations,” interjects Wong. “Whenever you go into a boutique, you talk to the staff there, you talk to the boutique managers, you talk to people who are actually on the shop floor, and they can tell you anecdotes and they can tell you about what they see, but none of that is concretized or presented in any kind of official capacity as something that could actually effect any kind of change. I don’t know why that is, why people aren’t interested in things that could help their businesses grow.” 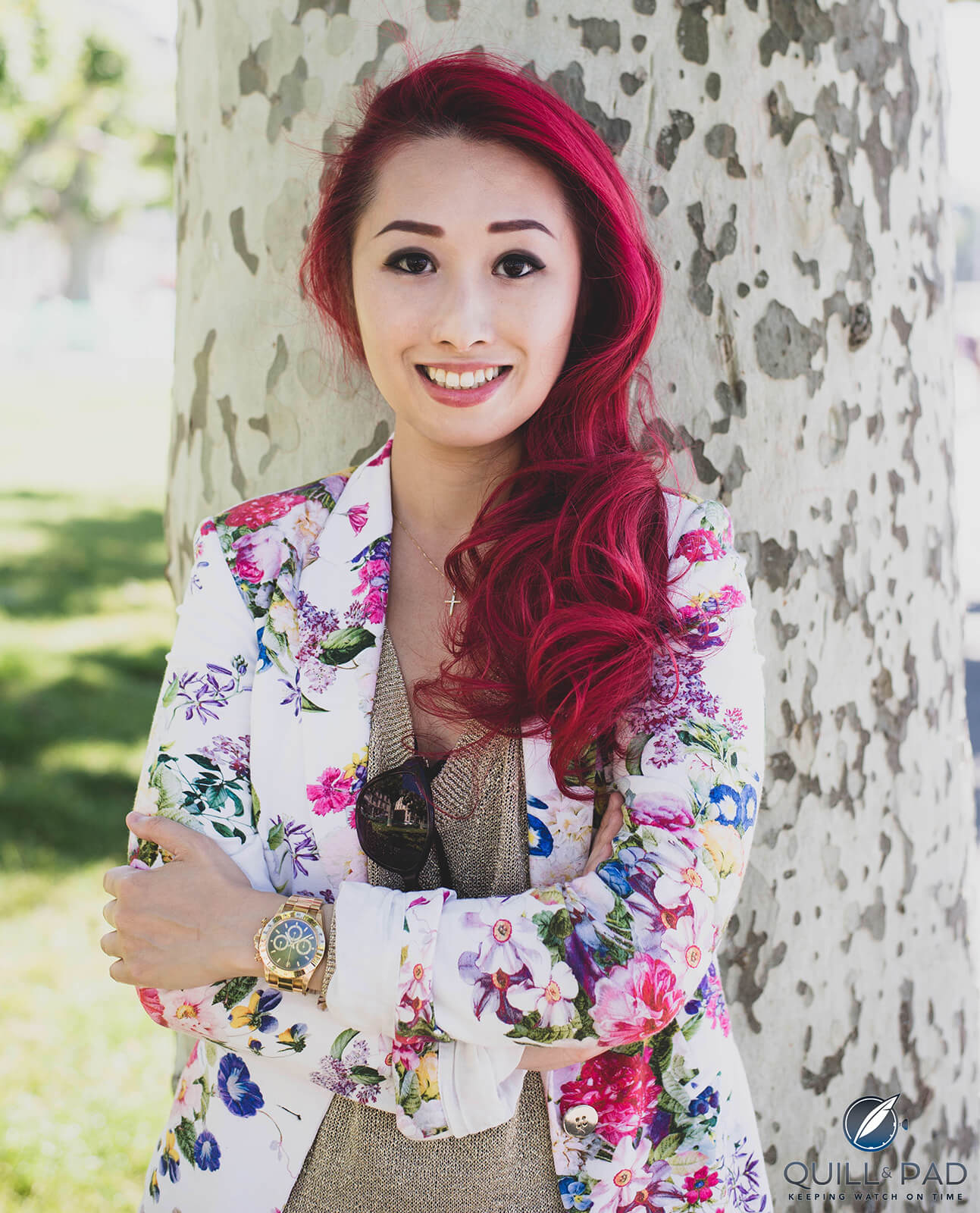 The trio of co-founders agrees that maybe the most important factor in driving change is numbers. “When did people [in the watch industry] start paying attention to the Asian market? When they started buying in big numbers,” Wong states an obvious example. “When did brands start making products solely targeted at Chinese customers? When they started spending money.”

“The numbers [will] talk,” inserts Hirschy, by which she means the number of female consumers expressing wishes, being present, and interacting with the watch community. As pointed out during the Geneva Watch Days 2021 talk, women influence 85 percent of all consumer spending. If brands aren’t paying attention to this by now, they are omitting a huge potential customer segment. “That’s the thing,” Wong lays out, “I don’t have to justify our position based on moralistic methods or factors, which may or may not be subjective and can be dismissed as being cultural or too woke or too progressive in a conservative market. Numbers talk.”

“Half of the world is taking their talent and their money elsewhere,” Wong sums up. “Because they don’t see a place for themselves in this world. If you don’t think that’s a problem, you are part of the problem.”

More than “this woman’s watch”

There has been a lot of talk since Watch Femme has been called to life about genderless vs. gender-free watches, and Suzanne Wong’s famously coined phrase, “any watch is a woman’s watch if a woman is wearing it,” has been often heard and at times misinterpreted. Watch Femme is not calling for any change in actual products that brands produce, but rather for them to stop putting labels like “men’s watch” and “ladies’ watch” on them.

Not long after this began to be talked about back in the heavy Covid days of 2021, Hodinkee ran an article called All Watches Should Be Unisex – And Here’s Why written by Cara Barrett. Since that article, there has been even more discussion (see Hodinkee’s own “reader response” article a few days later as an example). It has become obvious that the message is not always being received as sent.

“I think people confuse genderless with gender-free,” Wong explains. “When people object to moving that sort of categorization they think we’re trying to harass everyone into making unisex watches, which would be wrong and unrepresentative of the diversity of individuals and also boring, which is not something that we want. What we want is gender-free. So keep making the things that you’re making, whether they’re masculine or feminine or unisex, just stop telling people that men have to wear masculine things and that women have to wear feminine things.”

“It’s about being able to make your own choices based on your own tastes without being put in a box by the way the product was conceived or by the way it was communicated,” adds Veysset. “You can have feminine watches, you can have men’s watches, or whatever, but it can be your choice.”

“There’s a lot of assumption. Why I don’t like ‘genderless’ is that implies you’re stripping gender away from things, which you’re not. You’re just allowing people the freedom to choose: it’s not genderless, it’s gender-free,” Wong clarifies. 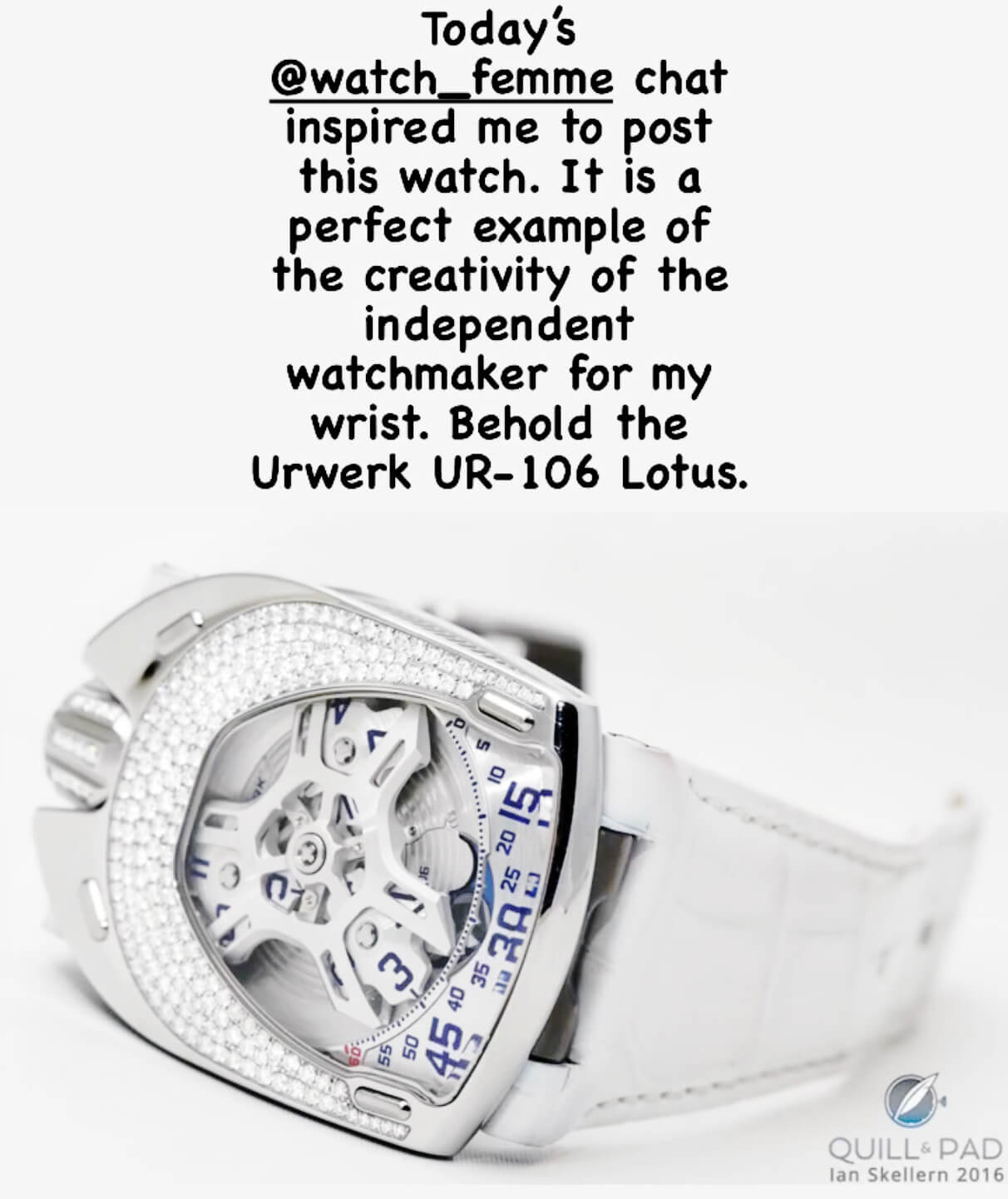 Inspired by a Watch Femme Clubhouse session, Elizabeth Doerr posts the Urwerk UR-106 Lotus on Instagram

This dynamic trio has invested a ton of time and work into this association. Why? One of the answers might not be so surprising to a WIS.

“Honestly, I get fed up with seeing watches that I can’t wear,” Wong immediately answers. “Yeah, I can’t wear them because they’re too big, or they just don’t fit right, or they’re just not made with a woman customer in mind. It comes from my own experience, stemming from a place of frustration of almost always being the only girl in the room, which pisses me off. It gets really old being the only woman in the room – and coming across beautiful pieces that were clearly not made for people built like me. Then I realized I’m not the only one who feels this way, but for some reason all of us feel this way separately, individually, and we never talk about it. So this time we’re going to.”

You can join Watch Femme, get involved with the organization’s in-person events, and find out more by visiting www.watchfemme.com.

Can Men Wear Women’s Watches? And If So: What, Where, And When?

Women Talking Watches On “Who Needs A Book Club!”: Men Might Learn Something (Video)

It’s Time To Take Women, Their Watches, And Their Opinions Seriously In The World Of Horology

One Woman’s View Of What Women Want In Watches