When The Zombie Apocalypse Strikes, What Do You Do? Watches Of ‘The Walking Dead’ – Reprise

As the survivor group sits around a campfire, getting to know each other, members laugh at Dale as they talk about how he winds his (unidentifiable) watch, wondering why he would even bother. Who needs the notion of time when the apocalypse has come down on humankind?

“I gotta ask you, man, it’s been driving me crazy,” one group member opens the conversation. “That watch.”

“What’s wrong with my watch?” asks Dale, whose role is more or less the group’s moral compass.

“I see you with that watch every day, same time, winding that thing like a village priest saying mass,” the guy pushes.

Then Dale waxes lyrical, quoting William Faulkner. “I like what a father said to a son when he gave him a watch that had been handed down through generations. He said, ‘I give you the mausoleum of all hope and desire, which will fit your individual needs no better than it did mine or my father’s before me. I give it to you not that you may remember time, but that you may forget it for a moment now and then and not spend all of your breath trying to conquer it’.” 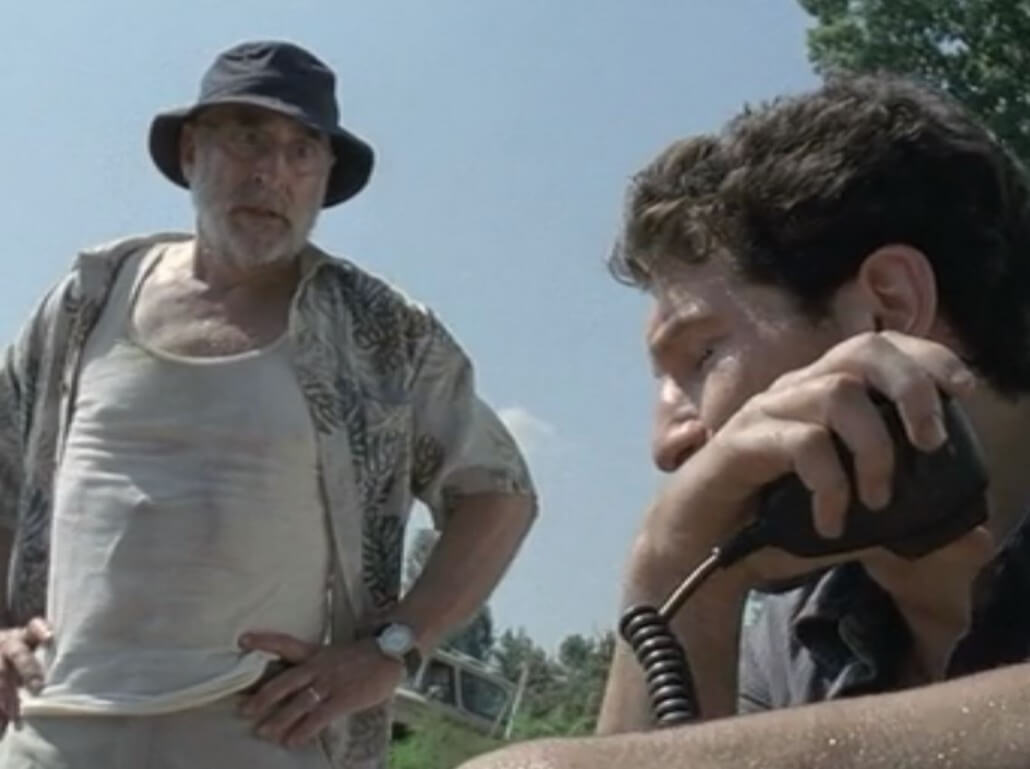 Dale looks at Shane, ever-present watch on wrist, in ‘The Walking Dead’

Interestingly, the entire series, at least for the first few seasons, put some emphasis on not only time, but also timepieces. And notably, without heavy-handed product placement. In fact, it is exceedingly difficult to tell what watches the characters are wearing at all, and many of them do wear wristwatches. 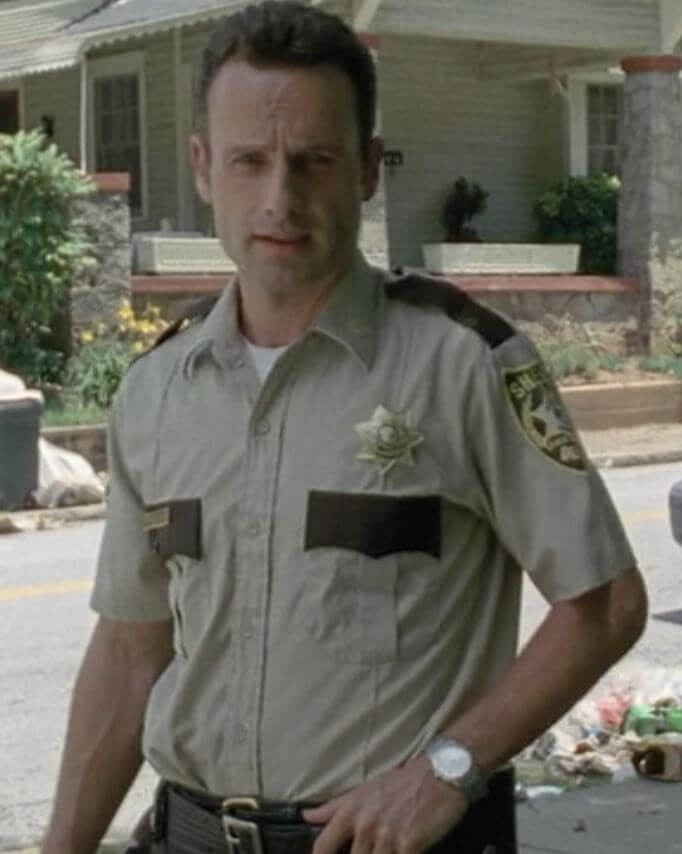 Rick Grimes from ‘The Walking Dead’ wearing his constant companion

Apparently − or should that be naturally? − wristwatches are a necessity in the post-apocalyptic world. After all, you really would need know when darkness is about to fall so you can get back to camp before the walkers get active.

No WIS could fail to notice the big watch on a steel bracelet that the main character, policeman Rick Grimes (played by Andrew Lincoln), flashes in every scene since picking it up out of his police locker about 28 minutes into the first episode. We learn later it was his father’s and he has likely kept it not only so that he knows the time but also as a memento of days – and civilization – gone by.

The website WatchesInMovies.com identifies Rick’s watch as a Kenneth Cole. And someone at Watchuseek was even able to distill a screen shot finely enough to identify it. 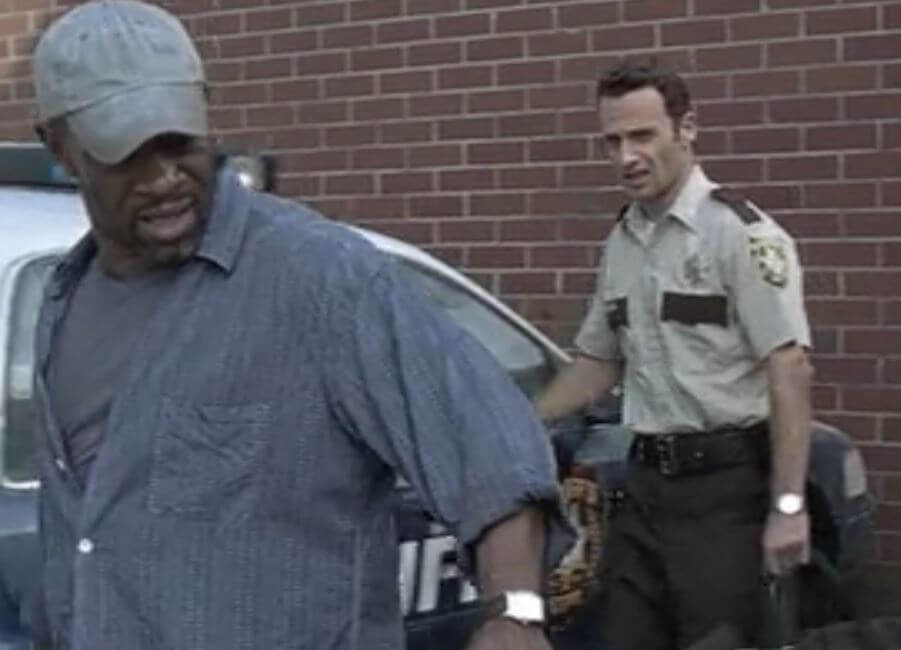 In the first show of the pilot series, good Samaritan Morgan Jones (Lennie James), who helps Rick understand the zombie apocalypse after waking from his coma in the hospital, seems to me to be wearing an IWC Da Vinci Automatic in a tonneau-shaped case in gold. The shape of this watch is hard to miss.

Branding is not important here, though. It’s the symbolic value that seems to keep watches on wrists in this show characterized by cliffhangers at the end of almost every episode. 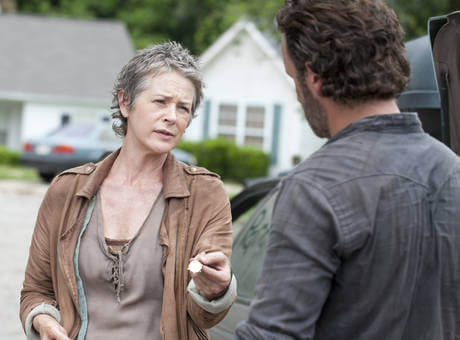 In season 4, episode 4 Rick gives away his watch to new friend, Sam, in the hope it brings it back to him after they fixed a time to meet, but Sam doesn’t reappear. Carol Peletier (Melissa McBride) then gives Rick her watch – the one she had been given by her abusive husband on their first anniversary – as she has somehow gleaned that Rick can’t be without his good luck charm.

For Carol, this was symbolic of cutting ties with her former self (I won’t spoil the further reasons why this is so). Time no longer matters to her.

In a moment of pure symbolism, Herschel Greene (Scott Wilson) gives Glenn Rhee (Steven Yeun) his prized pocket watch as an emblematic “welcome-to-the-family” token in the episode “Judge, Jury, Executioner” (season 2, episode 11). “My grandfather brought this over from the old country [Ireland],” he says. “He passed it on to my father, who passed it on to me.” 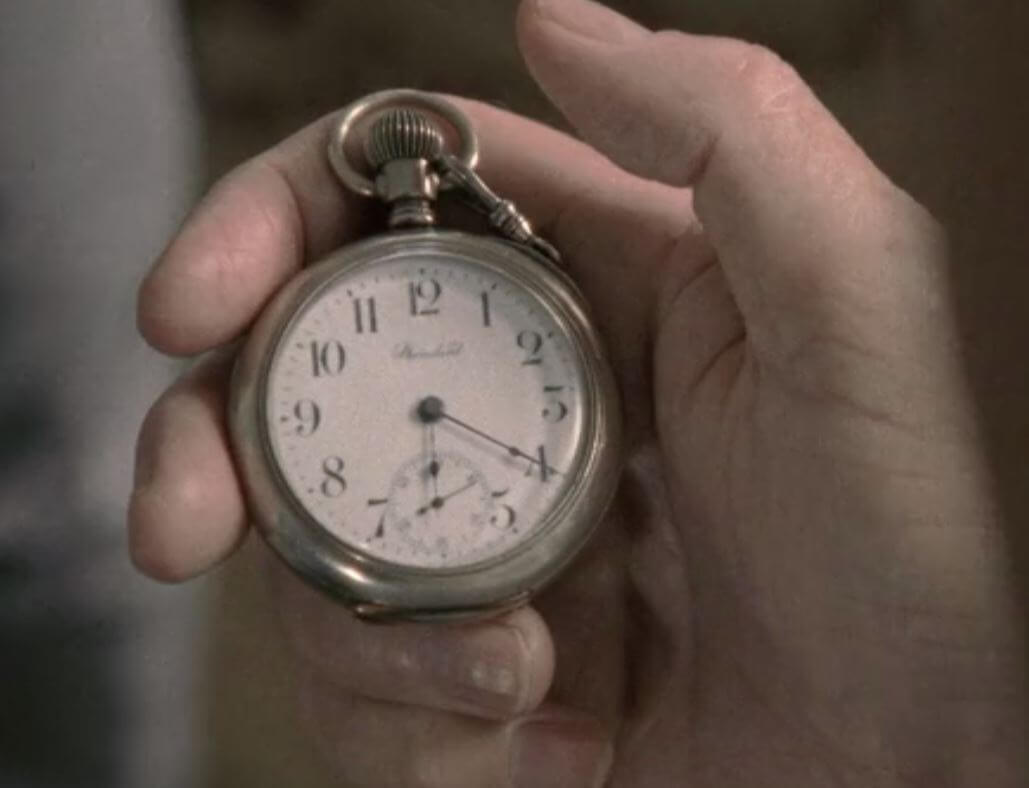 The pocket watch – whose make is again not easily deciphered, though it could say “Neuchâtel” on the dial – holds a lot of meaning for Glenn and Maggie (Herschel’s daughter and Glenn’s girlfriend). From season 3 onward, Yeun’s name is pictured next to the pocket watch (whose hands are running unnaturally fast) in the opening credits.

And Herschel later explains that, “Ever since I gave Glenn my watch, it’s always right now to me.”

Glenn is rarely without the pocket watch, and later in season 4 he demonstratively makes sure to take it with him in a scene where the group flees.

Moviepilot.com also explains that the timepieces often have times set on them – when they’re actually visible – that correspond to the season and episode. 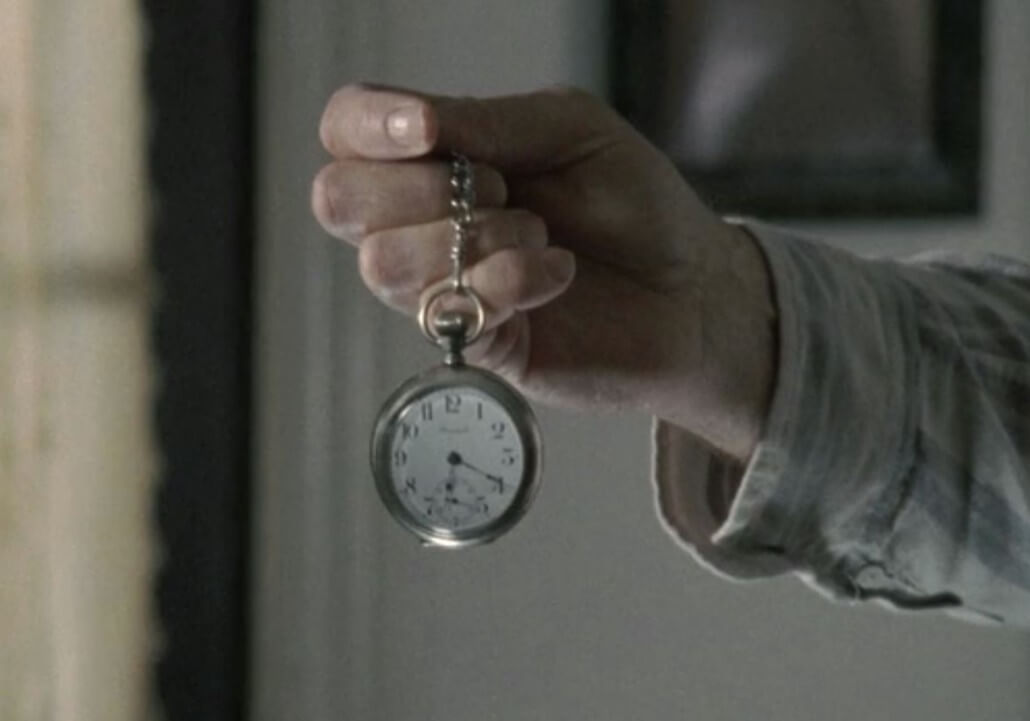 In fact, on Comicbook.com, the show’s executive producer Greg Nicotero is quoted as saying, “So if you look at any of the stuff in the show…even when Carol picks up Rick’s watch off the table, it says 5:01 [meaning season 5, episode 1]. Every episode that we shoot we adjust the time on the watches and the clocks to whatever episode it is we’re shooting.”

This is such a running theme in The Walking Dead that I have to ask if Nicotero isn’t a watch fan himself.

*This article was first published on February 6, 2015 at When The Zombie Apocalypse Strikes, What Do You Do? Watches Of ‘The Walking Dead’